Split-level homes rode a wave of popularity in the ’60s, but for decades, they were considered as dated as conversation pits. Most people either love them for the unique, dynamic way they break up interior space or hate them for their multiple short flights of stairs, which can be hard to navigate as we age. But conventional split-levels, which are often built on sloped land, are enjoying a bit of a resurgence right now, with new ideas about building multiple platforms inside a home’s envelope instead of separate floors becoming increasingly popular in places like Japan. 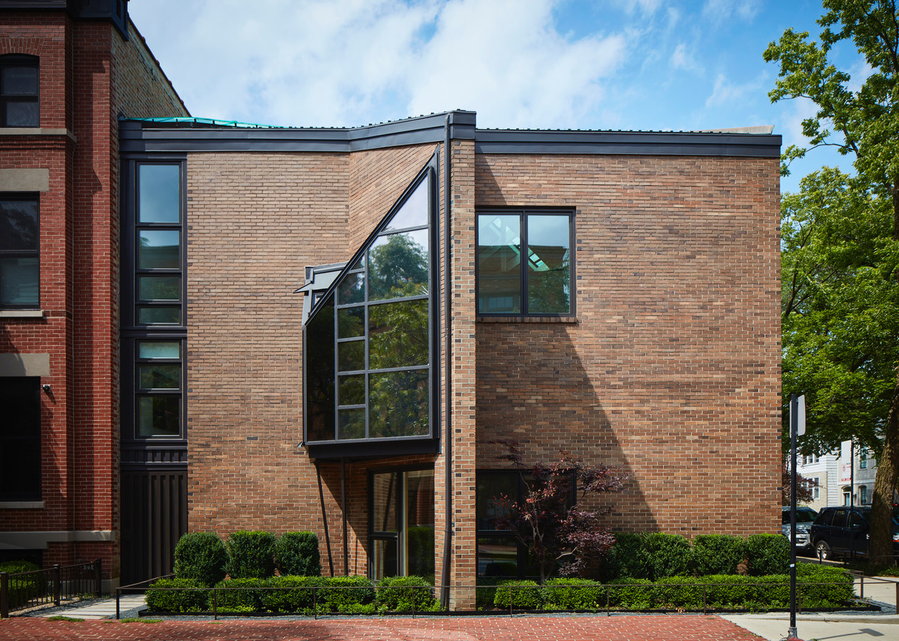 One version of the split-level concept is Water Netsch’s “field theory” design philosophy. The architect and former SOM design partner (who died in 2008) envisioned a building that appeared fairly conventional from the outside but contained multiple interior levels connected by open-riser stairs inside. He applied the concept to his own Chicago residence, originally completed in 1974, and in 2013, SOM helped the new owners update it with modern sensibilities while retaining all the properties that make it special. 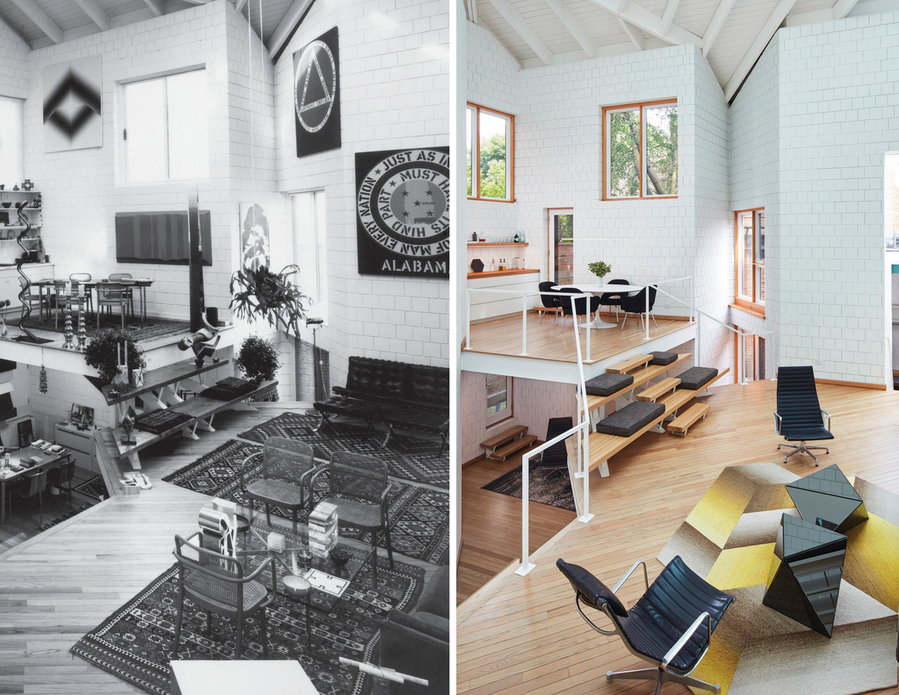 Set in Chicago’s Old Town neighborhood, the home lacks any indications as to its unusual interior layout when you view it from the street, unlike archetypal split-levels, where the entry door height is usually somewhere between the lower and upper levels. That doesn’t mean it’s boring, however. Its brick facade juts forward at an interesting angle, with a wall of glass strategically pointed toward the desired view. The home is by no means small at 3500 square feet, but once you step through the door, Netsch’s “field theory” comes into play, making it feel much larger than it really is. 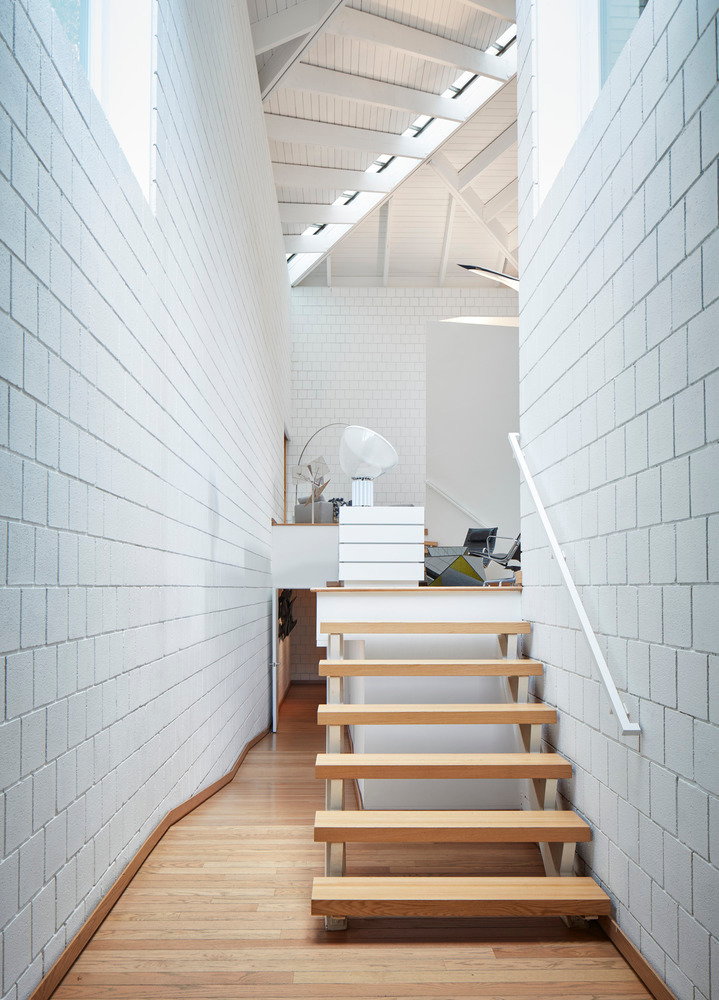 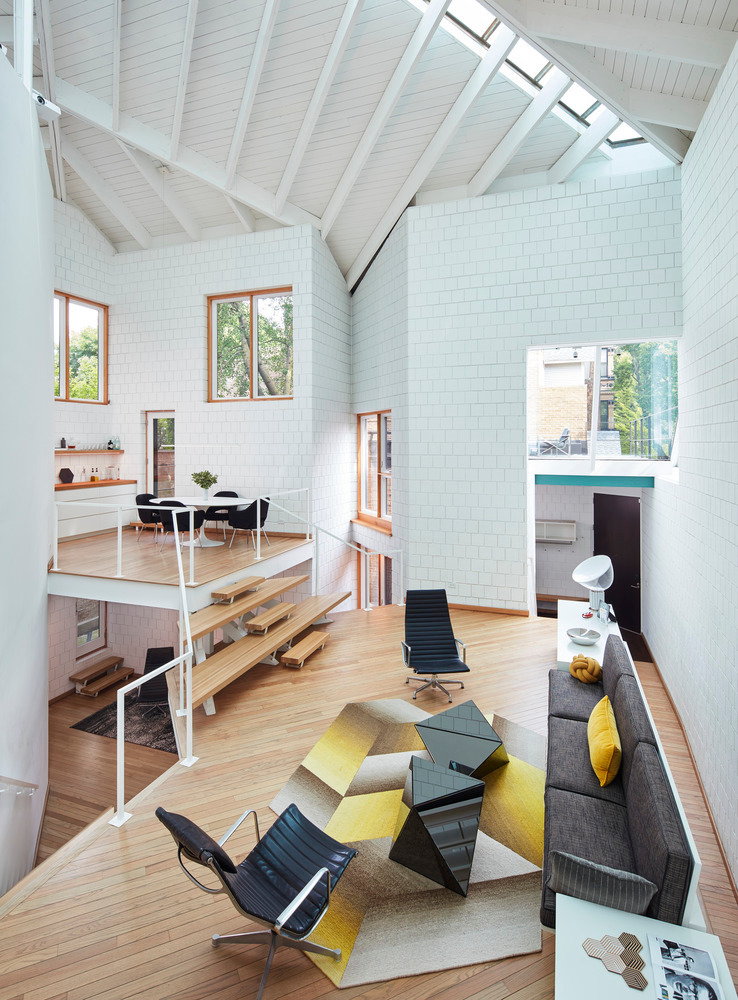 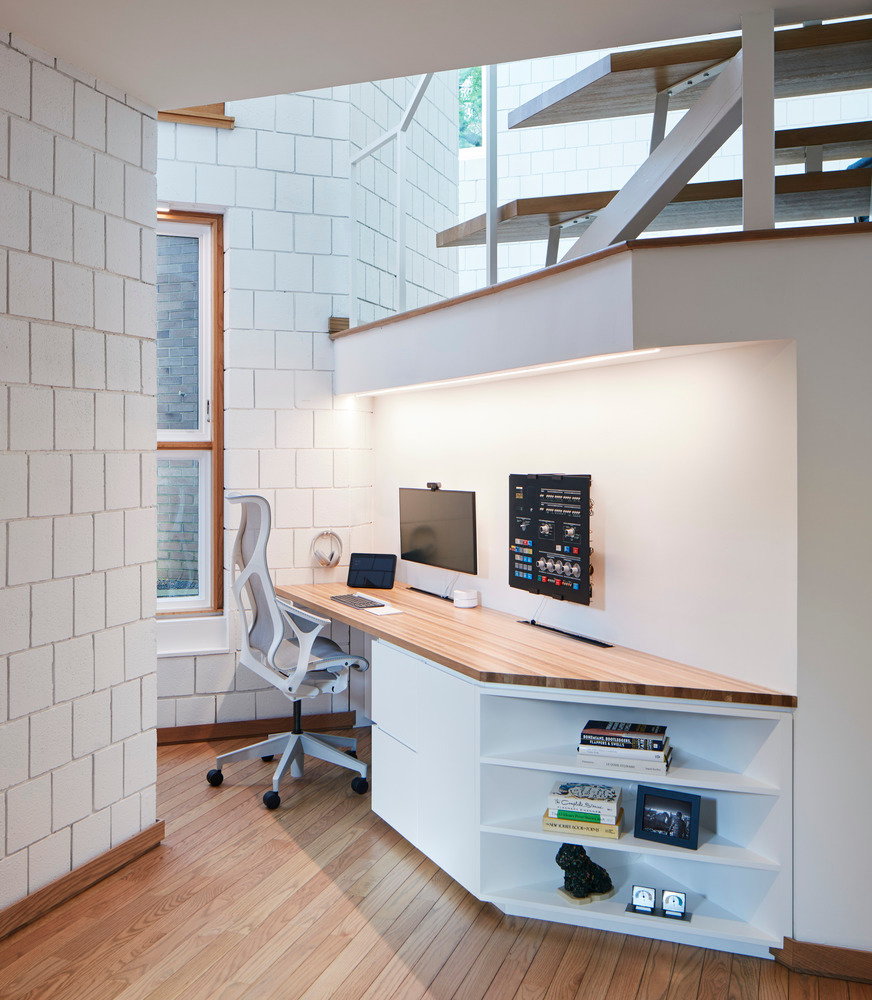 SOM says the theory is “based on complex geometries that establish intricate relationships between form and function.” That’s apparent when you see how the space is divided. Not a single room in the house is rectilinear, and many are only defined as separate spaces by their slight elevation above or below the next.

“Skylights that at first seem strangely placed are soon revealed as highly calculated decisions, framing views and illuminating specific spaces at certain times of the day and year,” say the architects. “Netsch’s application of field theory creates expansive sightlines between rooms; indeed, the only spaces in the entire house with doors are the bathrooms.” 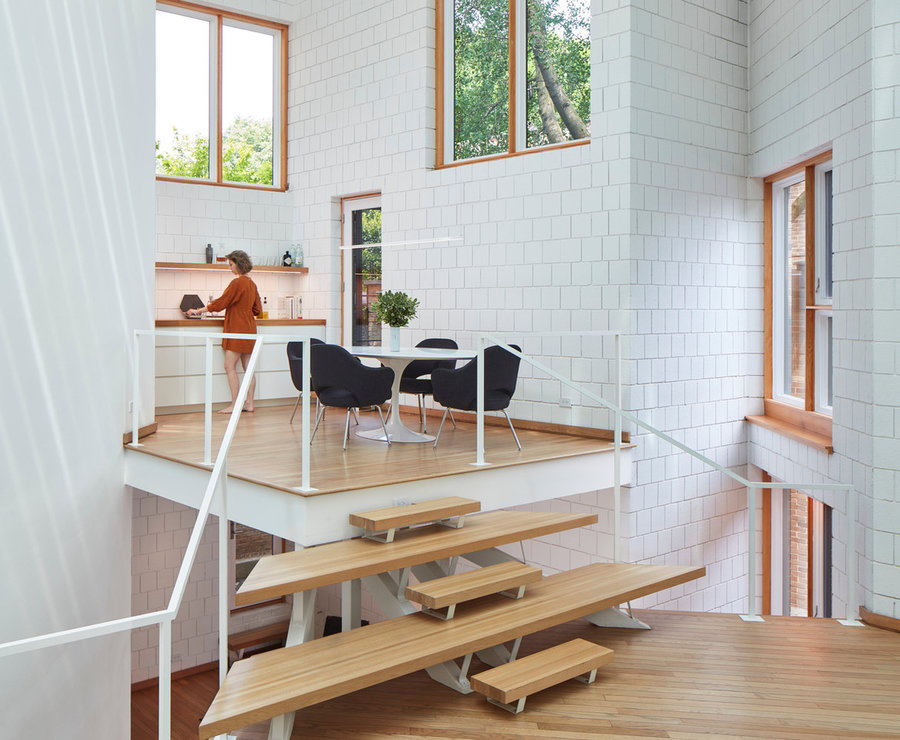 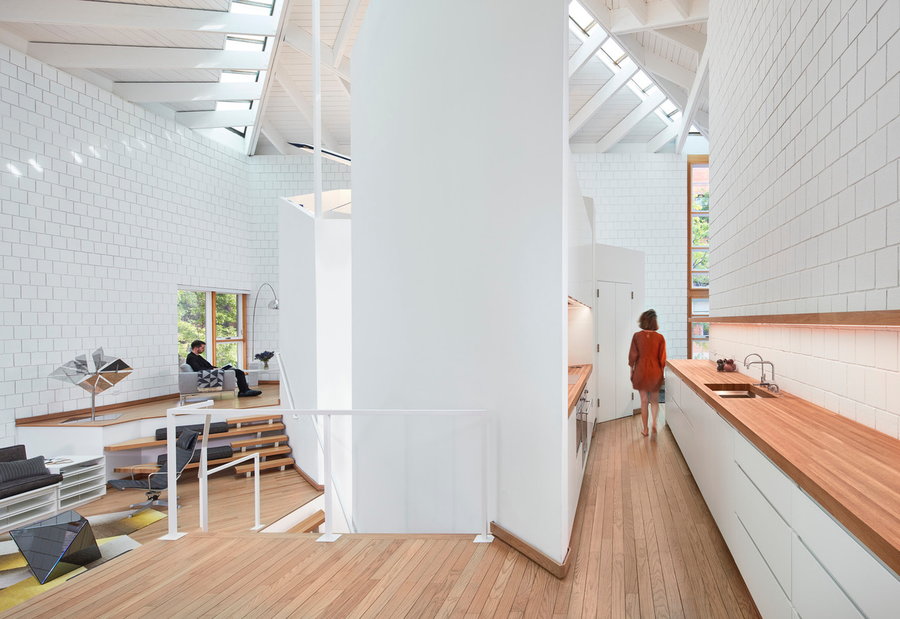 “The renovation added new appliances and cabinetry to a well-worn kitchen. A continuous 40-foot walnut counter and shelf were installed to recall the original linear service bar. The half bath was renewed with new counters, lighting, and a cleverly concealed water closet. New tile work and counters refresh the existing master bathroom configuration. To reconcile the open concept with the need for privacy, concealed sliding doors were designed and installed at the bath and master bedroom area.”

The lack of accessibility of this type of design is definitely a concern, not only to accommodate guests and future residents, but in case your own physical abilities change (and let’s be real, all architecture should be accessible by default). But it’s also easy to see the appeal. There’s something exciting about discovering each new level of the home as you make your way through it. 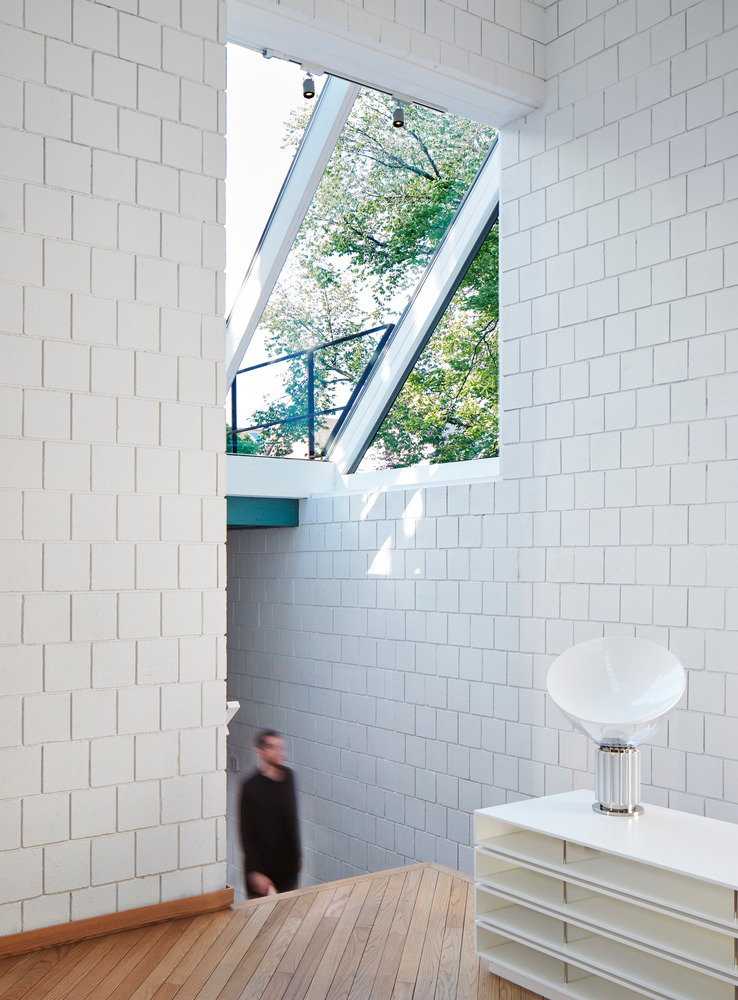 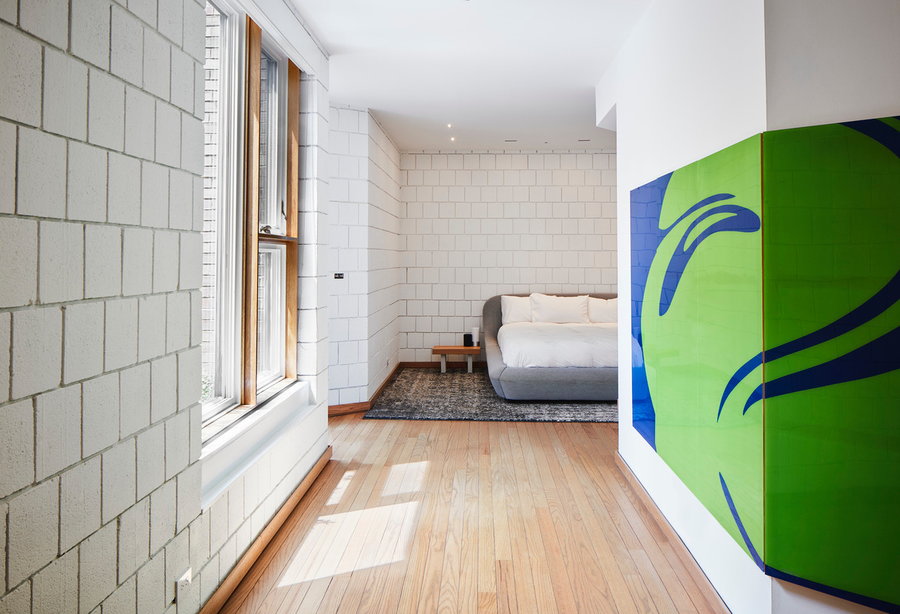 If you find this unusual type of interior layout intriguing, check out two versions from Japan: a dramatically cantilevered home in Osaka with eight tiered interior levels and a narrow wooden house in the city of Toyota full of compact platforms that ascend from the ground level up to the ceiling in a spiraling pattern.