In the West, bricks are almost always used to create straight, uniform walls in rectilinear buildings. India, on the other hand, has a long history of sculptural brickwork, using these basic architectural building blocks to form complex shapes and patterns in a mélange of red, orange, and golden hues. Some of the most visually spectacular examples of this include stunning geometric step wells and the Hindu temples of Bengal, where the bricks are mixed with both figurative and decorative terracotta relief plates. 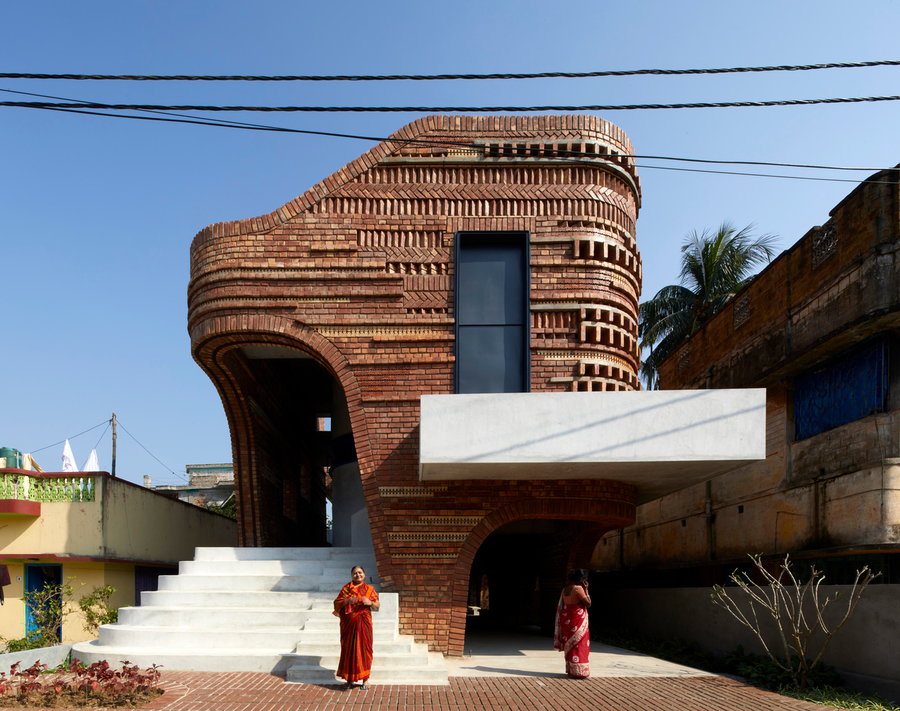 Architectural firm Abin Design Studio (ADS) drew on this tradition for a beautiful new modern building in the town of Bansberia, West Bengal. “Gallery House” features an organic asymmetrical shape, a facade of rectangular bricks laid in dynamic patterns, and a cantilevered terrace that projects out over the front steps. The client originally purchased this plot of land across the street from his house as a parking lot for his vehicles, subsequently hiring the architects to build a garage with staff quarters above it. 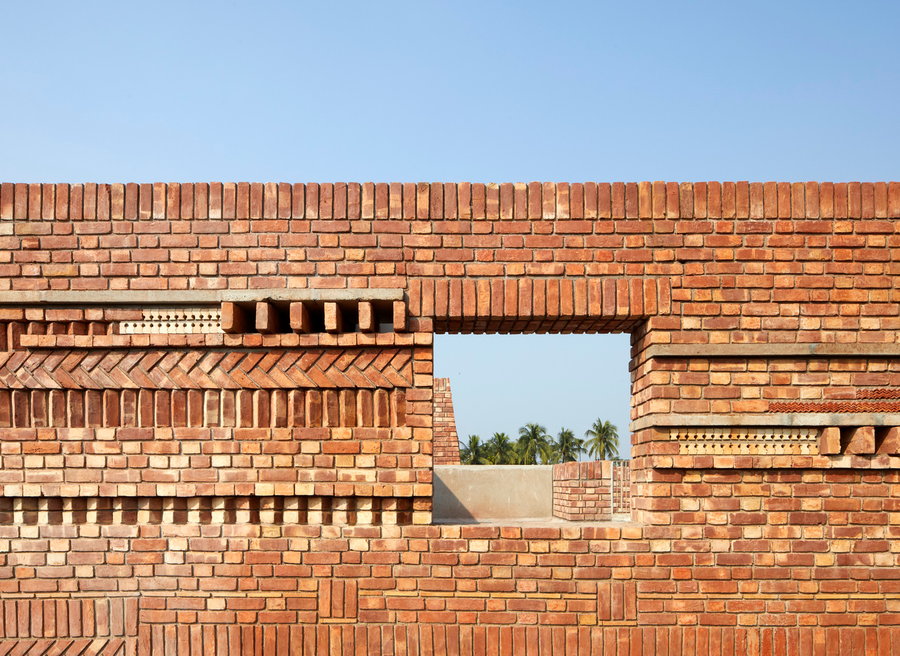 Upon being asked, ADS had just completed the client’s home, “Wall House,” itself a contemporary residence clad in weathered steel occupying nearly 7,000 square feet. Built out to the edges of the plot, the home embraces the ongoing trend of inscrutable street-facing facades concealing luxurious courtyards, lawns, and pools. Not wanting to take up too much of the public lands, the architects managed to convince the client to use the lot across the street in a way that gave back to his fellow citizens instead of expanding his private complex. 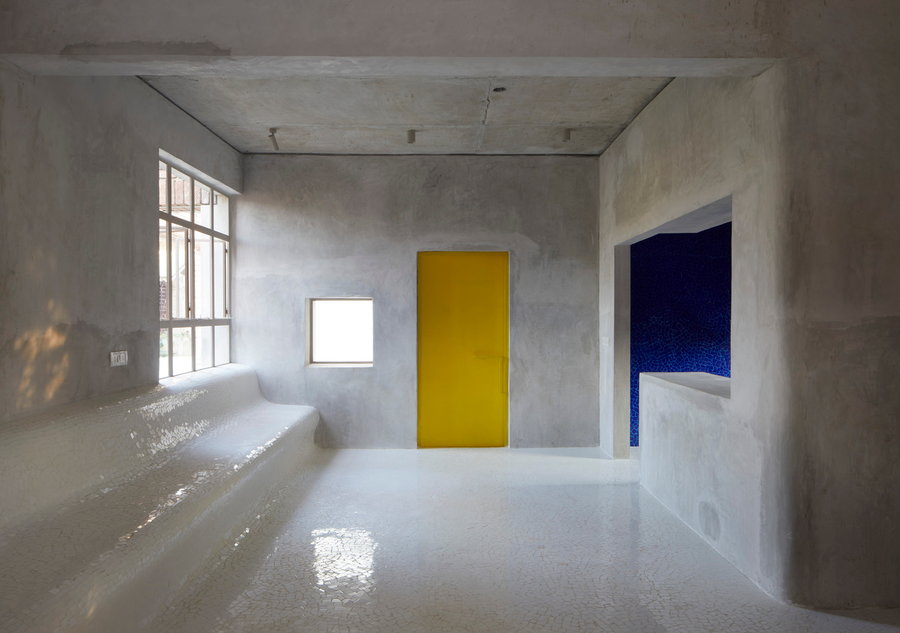 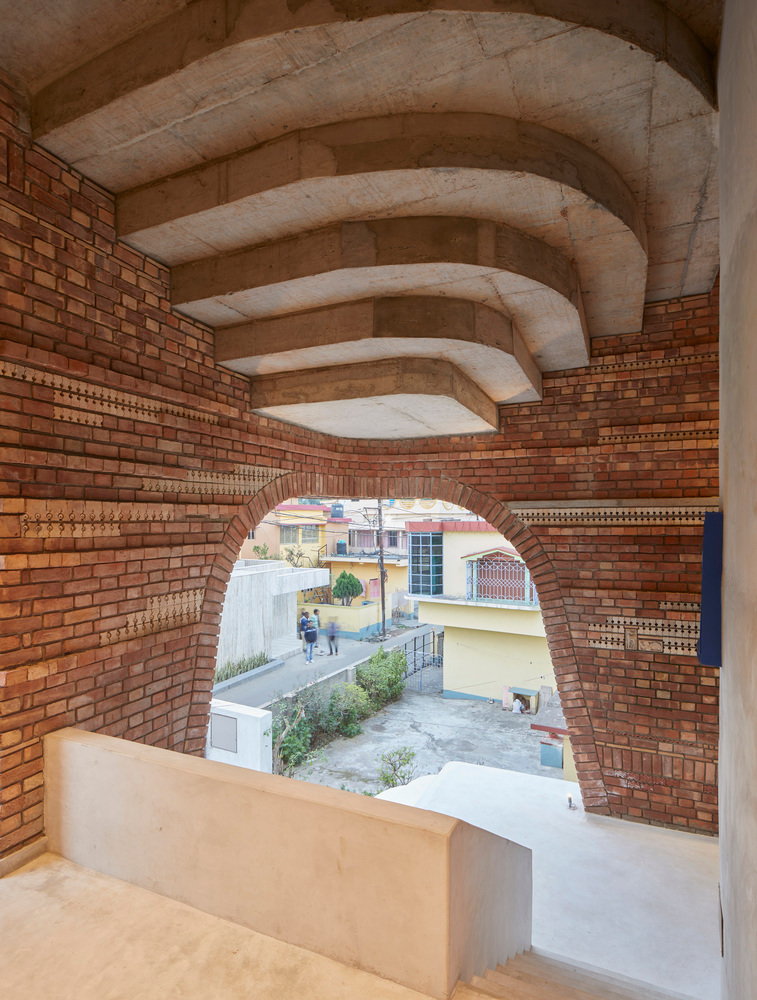 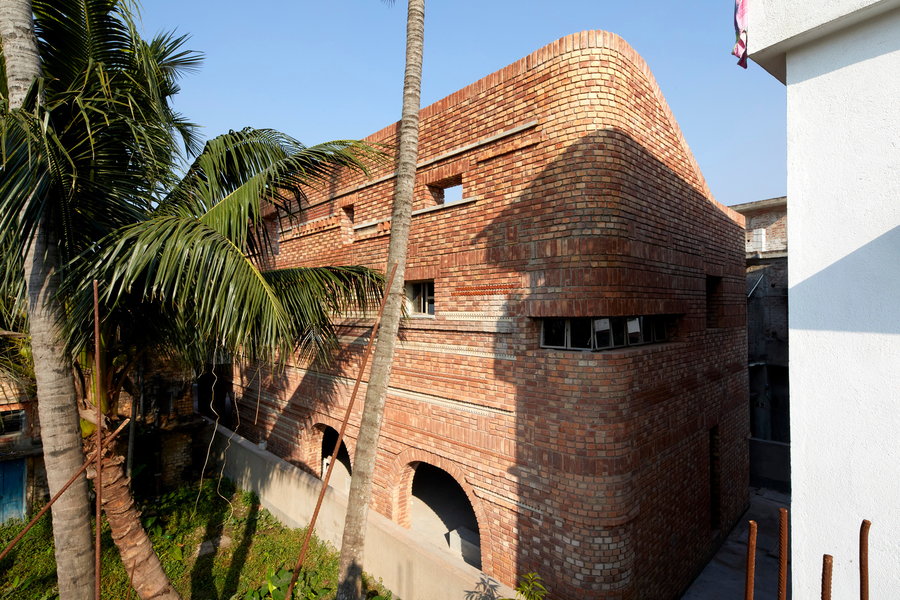 The client initially agreed to build a garage on the ground level with a multipurpose public activity space overhead, featuring a design that would symbolically welcome community members by stretching out toward the street. As the project progressed, he decided he wanted to forgo the garage altogether in favor of opening more of the building up to the public. The ground floor then became a community hall, while the upper floor doubles as a dormitory for his resident staff by night and a multipurpose room for community yoga sessions and classes by day. 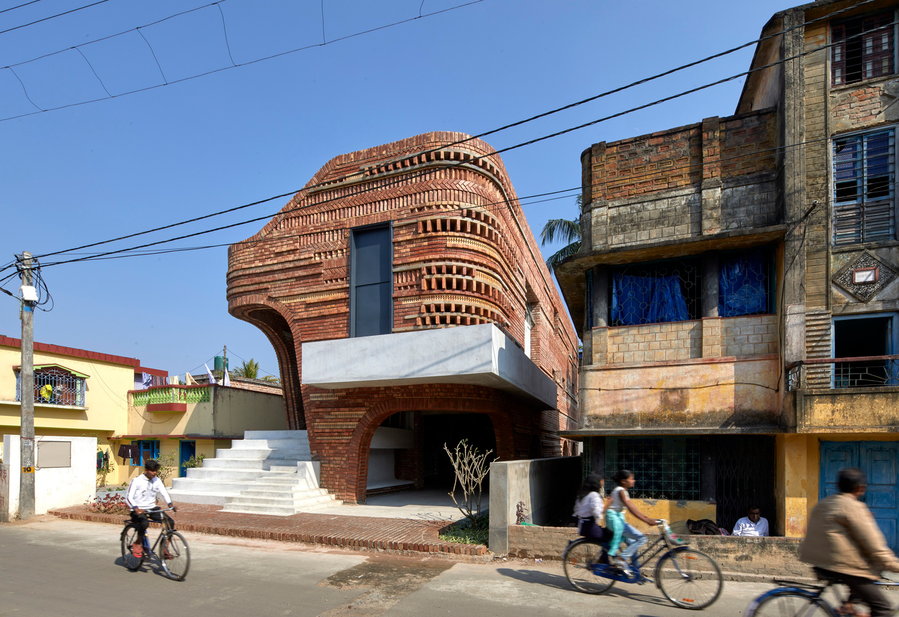 “The client enjoys a sense of pride and joy of ownership seeing the space put to good use,” say the architects, who add that “as a decision to introduce another architectural expression to the community, the building took cues from Bengal’s terracotta temples. Exposed brick masonry walls inlaid with ceramic blocks define the building character as a contemporary expression of the inspiration. Collaborating with a ceramic artist, rejected ceramic blocks produced for industrial use were collected. Terracotta bricks were procured from a riverside brick field located nearby. These two were combined, using locally prevalent finesse of building masonry.” 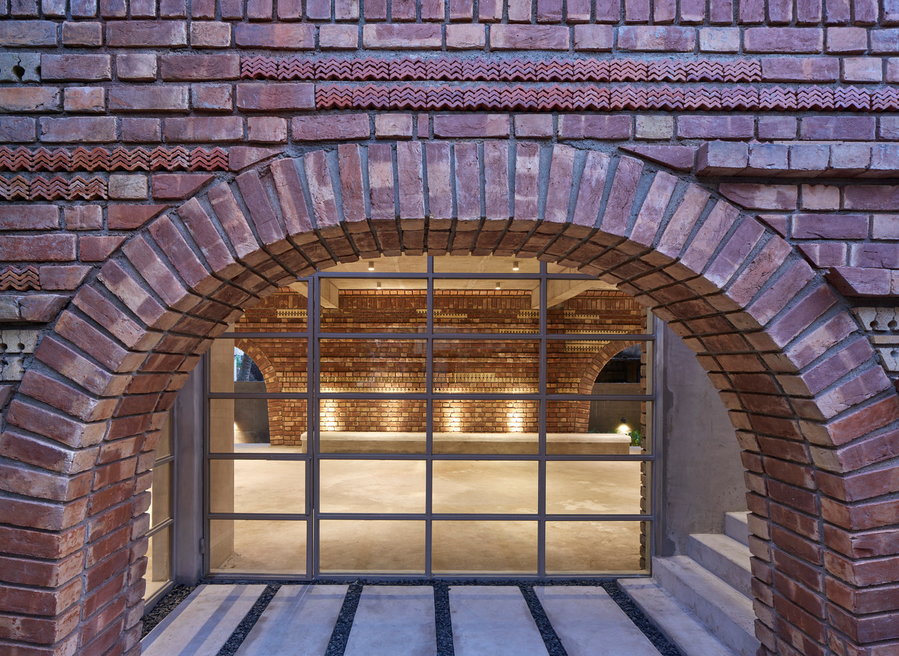 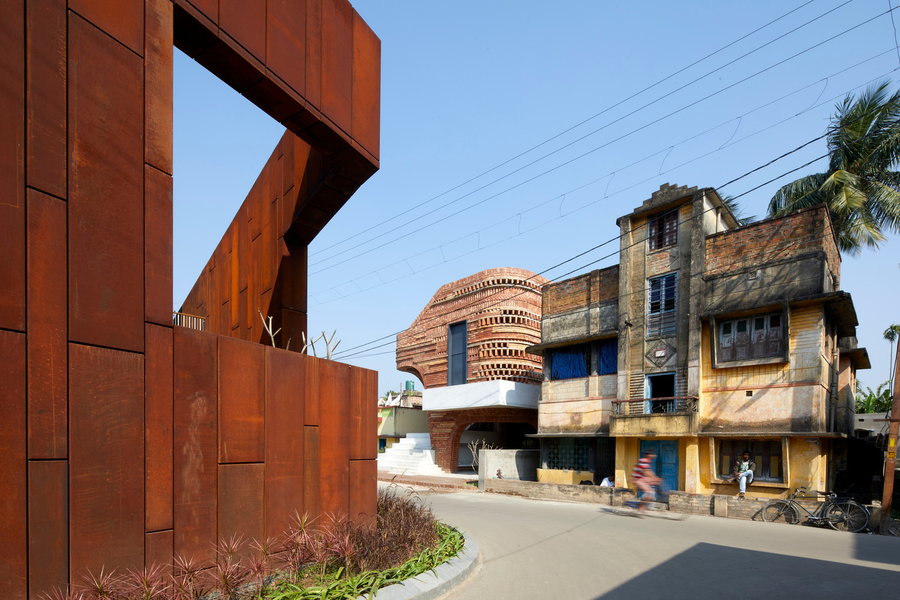 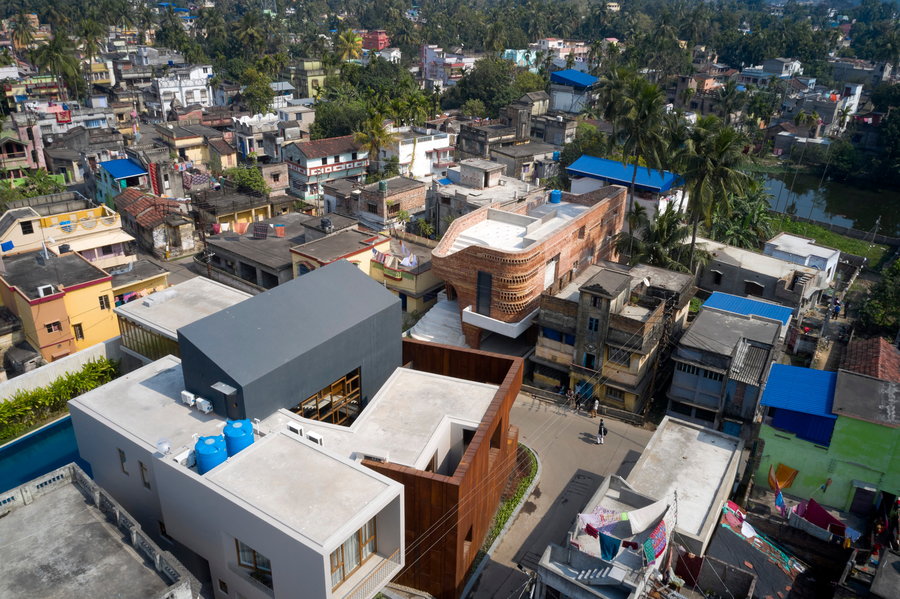 Regarding the structure’s name, the ADS team explains: “Every year, this locality holds a festive procession along the narrow, winding neighborhood lanes as a part of a cultural celebration. Reciprocating this, the building steps down towards the street form a gallery for the onlookers to sit, who gather at the street-side during this event. Through judicious planning and play of voids in volume, the integral space of the building was shared with the neighborhood people as a humane gesture of giving back to the local community, without disrupting the privacy and security of inner functions.”