An unusual bubbling landscape has appeared in Copenhagen, with sections of it appearing to lift up off the ground in a way that’s almost — but not quite — organic. This arrangement of circles is especially striking when viewed from above, playing off the much more rigid geometry of the buildings around it. 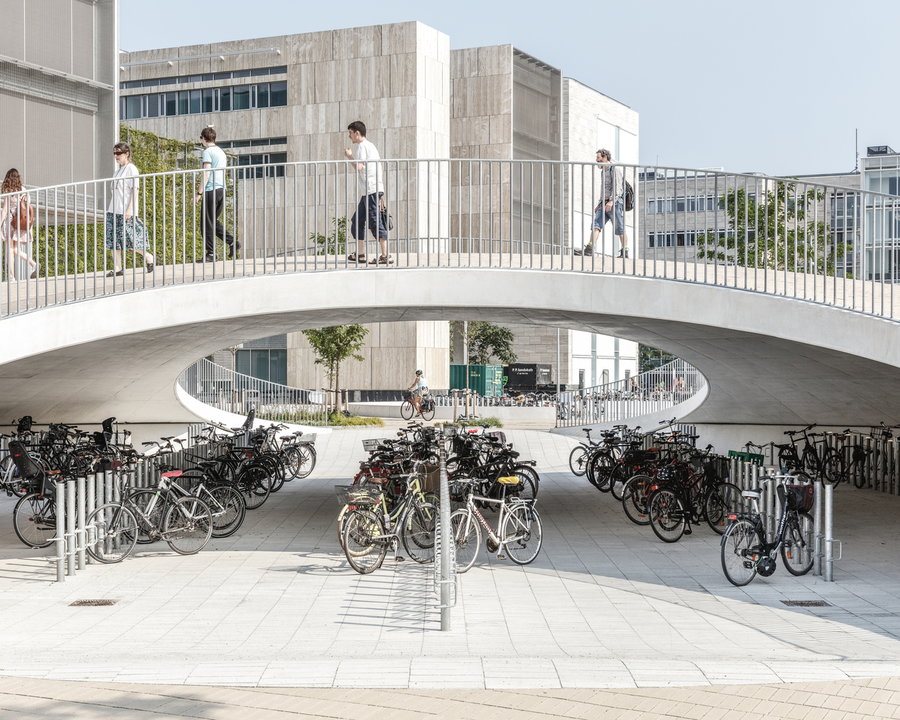 Dubbed the Karen Blixens Plads public square, this new space by Danish architecture firm COBE addresses a common problem in a nation of cyclists: finding a convenient and covered place to park one’s bike. The square features a “concrete carpet” that rises into artificial hills to reveal secure and orderly bike racks, and it’s all located next to the new University of Copenhagen.

Bicycling is considered a primary form of transportation all throughout Denmark, with people riding bikes in all weather, all year long. They’re used not just for pleasure and commuting, but also to travel around the mostly-flat country and even tote home groceries. During rush hour, bike lanes in Copenhagen can be just as crowded as highways in the United States and other car-centric places. That’s because around nine out of 10 Danes own a bike, and they cycle an average of 1.6 kilometers (about a mile) a day. 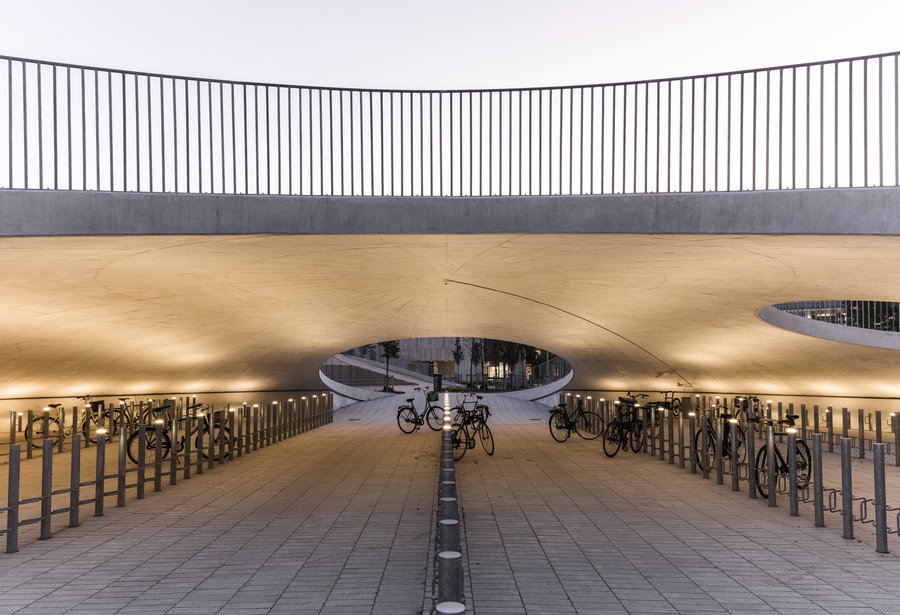 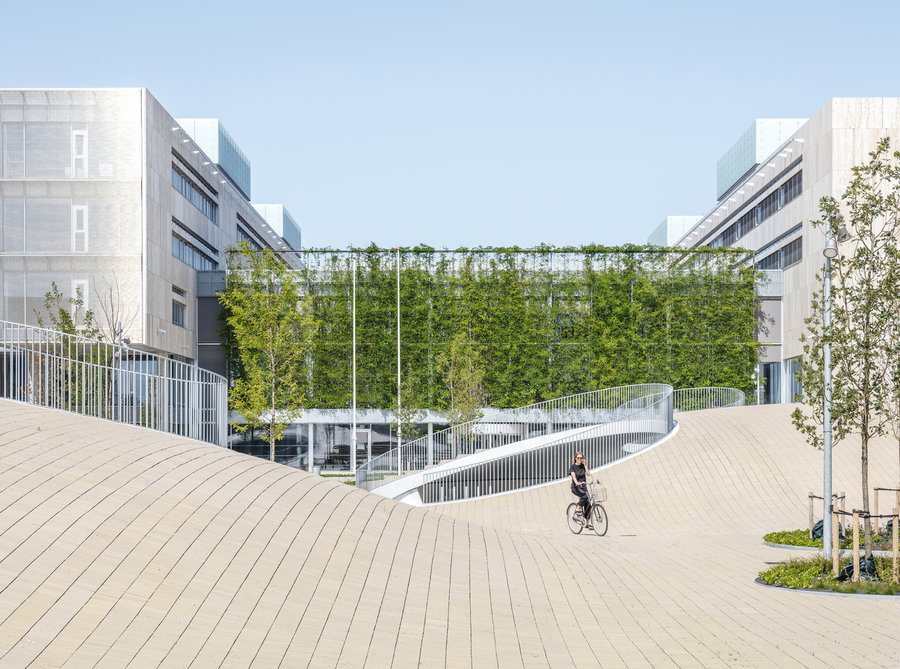 As you can imagine, Copenhagen has lots of bike parking to meet that demand, but rarely is it quite as cool as this. COBE has designed a public square and university plaza that breaks up the large space into smaller individual zones, including the domed bicycle garages, steps that form an outdoor amphitheater that can seat up to 1,000 people, public benches, and pathways leading into an urban nature preserve.

The architects add: “At more than 20,000 square meters, Karen Blixens Plads is one of the largest public squares in Copenhagen. Located between the newly built University of Copenhagen and the nature reserve Amager commons, Karen Blixens Plads is a hybrid of both park and square in one. The square has a unique undulating landscape, with bicycle hills and plant beds, and has room for more than 2,000 parked bicycles, two-thirds of them in covered spaces inside the bicycle hills. In a soft transition, Karen Blixens Plads brings together the university’s need for urban spaces and bicycle parking with the open landscape of the neighboring common, promoting green transportation, climate change adaptation, and biodiversity.” 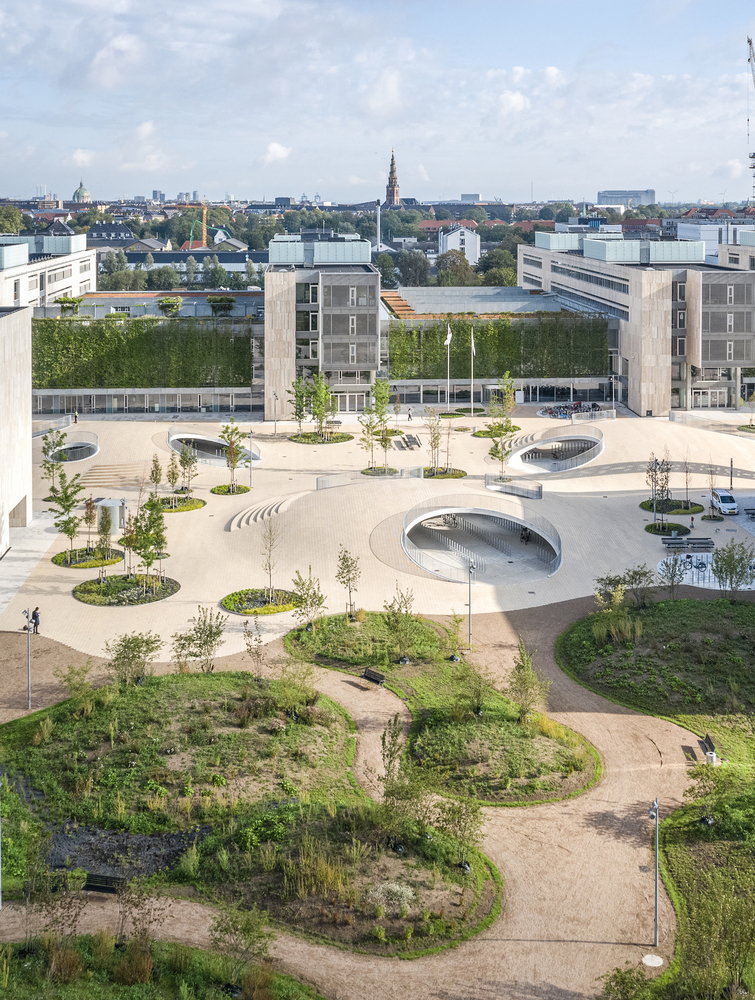 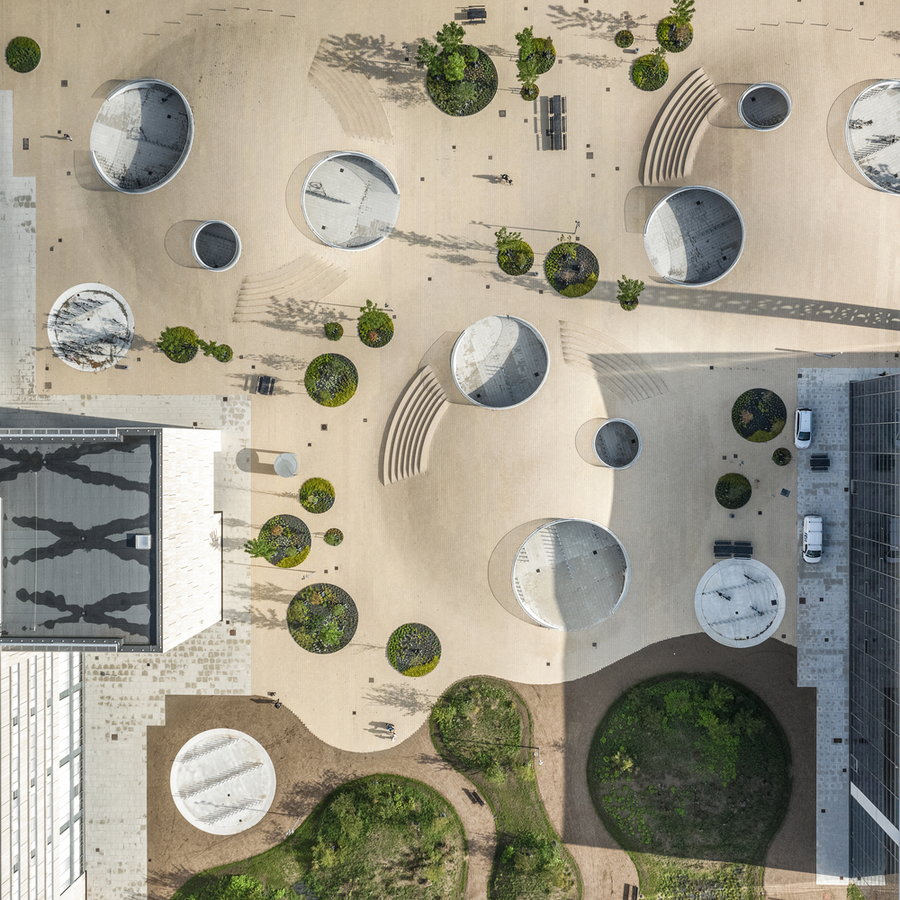 “In collaboration with CN3, COBE and EKJ’s construction engineers calculated and created 3D projections of the iconic concrete dome constructions. The solution is based on a shell construction as the load-bearing structure. Aesthetically, the design provides a large airy space underneath the domes. However, while a shell construction does not normally have holes in it, these domes have large openings, which constituted a significant challenge and required additional statistical analyses.”

The little circular planted areas are more than just decoration. They also absorb rainwater, preventing flooding and supporting biodiversity. On top of that, all of the materials chosen for the project are sustainable and low-maintenance. The design is kept deliberately simple and free of unnecessary ornamentation to make sure it’s easy to care for. 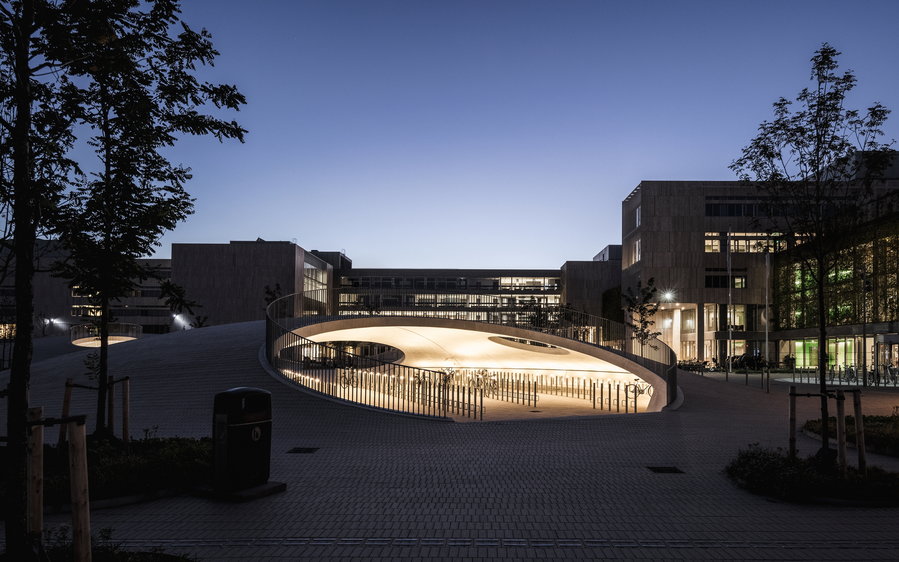 Despite having won first prize in a 2014 competition, the Karen Blixens Plads square was only just completed this year. At least the university students can feel safe leaving their bikes in such a well-designed public space!