A new amphitheater is currently being constructed as part of an ambitious regeneration project on Quebec’s Trois-Rivieres waterfront, a former industrial site in the east part of the city. The project is the brainchild of Montreal-based architectural studio Atelier Paul Laurendeau and boasts a distinctive red roof that covers the entirety of the complex. The Amphithéâtre Cogeco is located on the site of a former paper mill, which ceased operations in the early 2000s. The new developments on the waterfront will also be surrounded by new landscaping and house a number of cultural and recreational facilities. Atelier Paul Laurendeau’s design was the winning entry in an architectural competition held back in 2010, and the project takes its name from Canadian telecommunications company Cogeco. 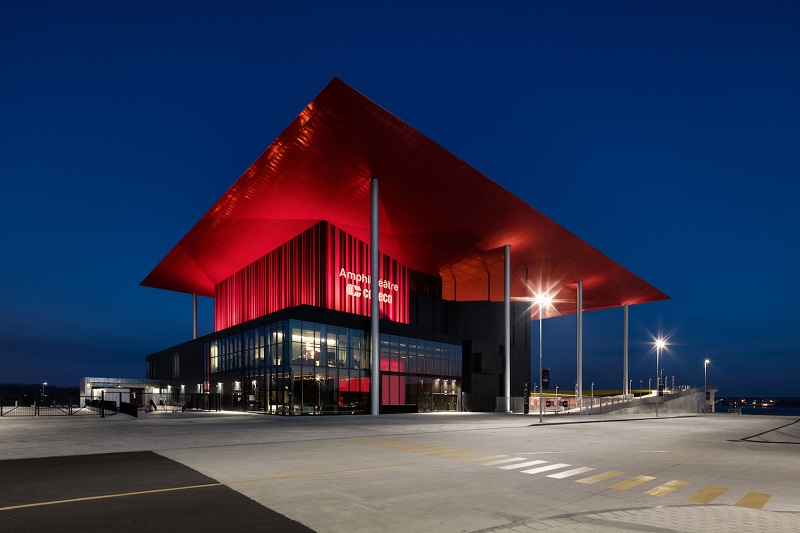 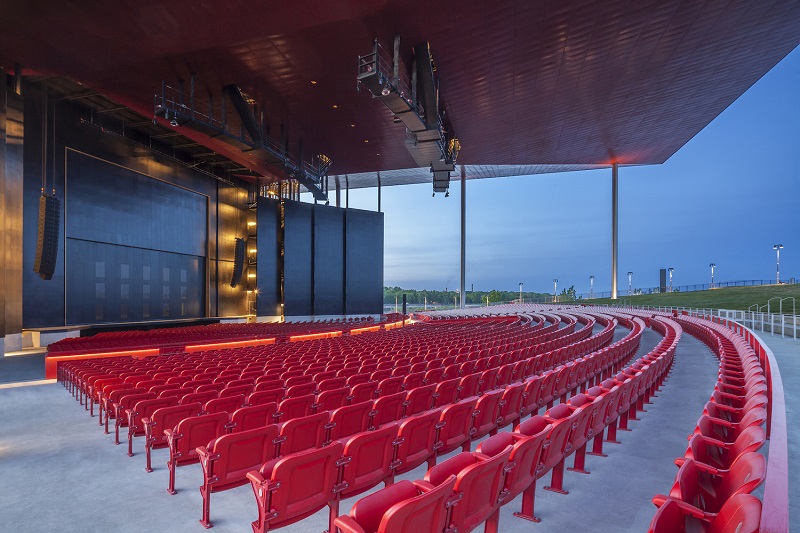 The original competition brief asked for a statement building that would call attention to the development and be a “landmark design of an international scope, comparable to the Sydney Opera House fronting the water.” Due to budgetary constraints, the decision was made by the design team, which consisted of both Atelier Paul Laurendeau and Beauchesne Architecture, to focus on making the roof the project’s defining feature. This bold move has resulted in a building that has a very distinct color and silhouette, making it easily identifiable in a low-lying landscape. 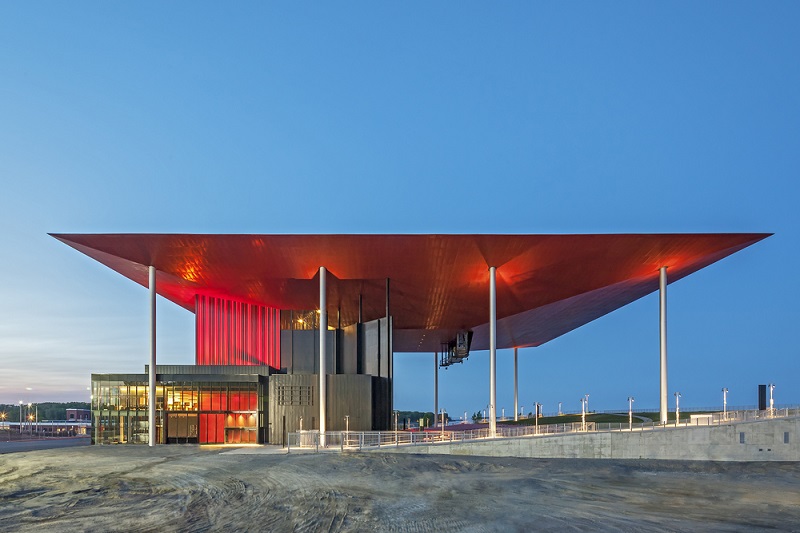 Atelier Paul Laurendeau has created an open-air amphitheater with a bright red roof floating above it. Supported on slender white pillars around its periphery, the roof oversails the tiered seating inside the venue and a portion of the landscaped plinth that rises up in a wedge from the stage. Surrounding this are areas of faux grass that can also be utilized for seating, bringing the total capacity of the venue from 3,500 (fixed seating only) up to 8,700. 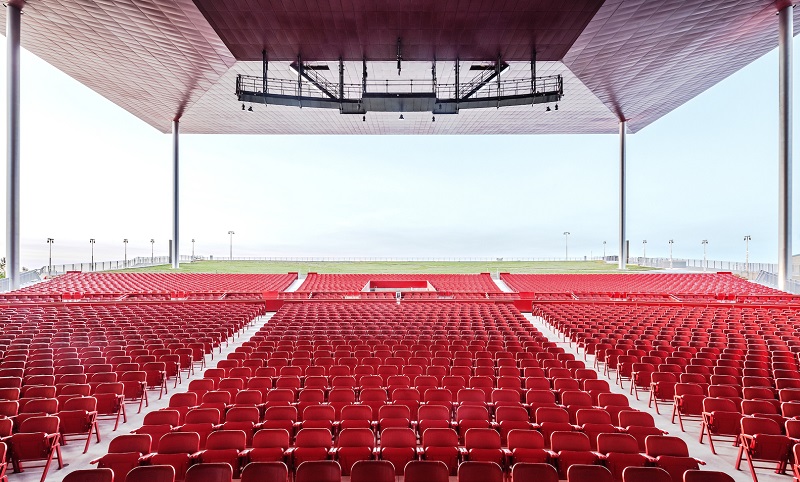 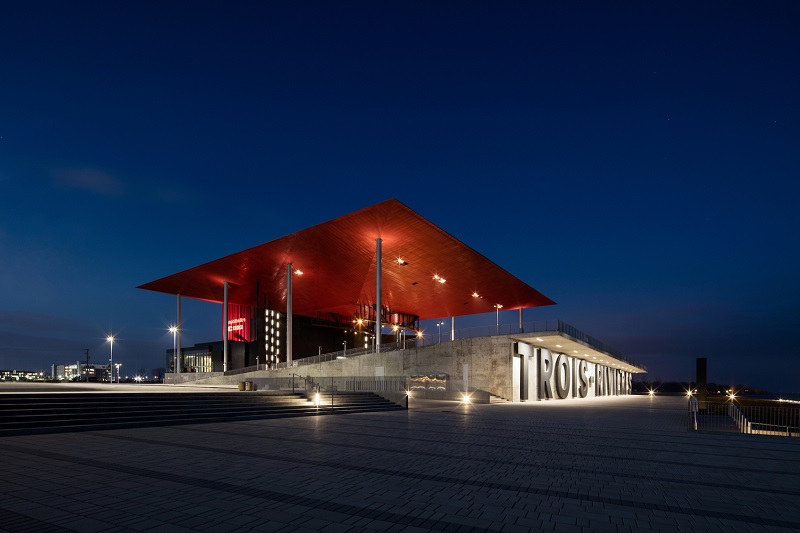 The impressive canopy of the roof sits 26 meters above the ground (this height also being the height of the amphitheater’s fly tower) and has a total surface area of 7,200 square meters. And it’s not just aesthetically pleasing —the roof is also functional in that it allows the venue to be used in all kinds of weather, unlike other open-air amphitheaters, which can only be used in the summer months. “The architectural parti exploited a fundamental core element of the program: a roof that protects the public from the rain. Intended in the program as a low element, limited to the fixed seating area, it was raised to the level of the fly tower to embrace it and extend beyond its initial limits to form an 80-by-90-meter rectangle on the horizon,” explains studio head Paul Laurendeau. 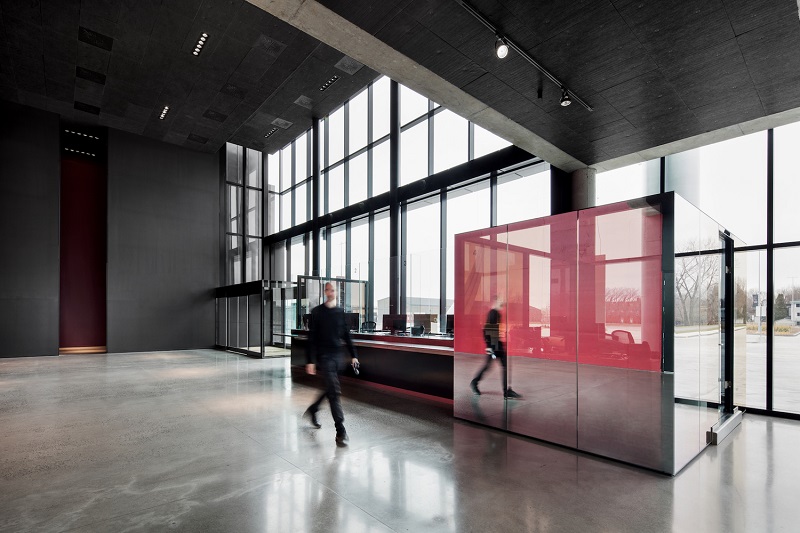 Continue reading below
Our Featured Videos
At the front of the complex, a glazed foyer welcomes visitors. A bar area occupies one side of this entry space. The amphitheater and landscaping areas are situated toward the rear of the development, which itself is sited on a three-river junction. With such a prominent location in the city, it seems like it’s just a matter of time before the area becomes a beacon of culture and activity and the desired regeneration takes hold of this former industrial site.