Many of the most renowned art and architecture projects teeter on the edge between universal appeal and one-of-a-kind obscurity. As with any creative endeavor, the eye of the beholder always determines what makes a masterpiece and what is simply unique. These university structures from around the world prove that statement to be infinitely true, so we’ll leave it to you to decide whether they’re terrific or trashy. 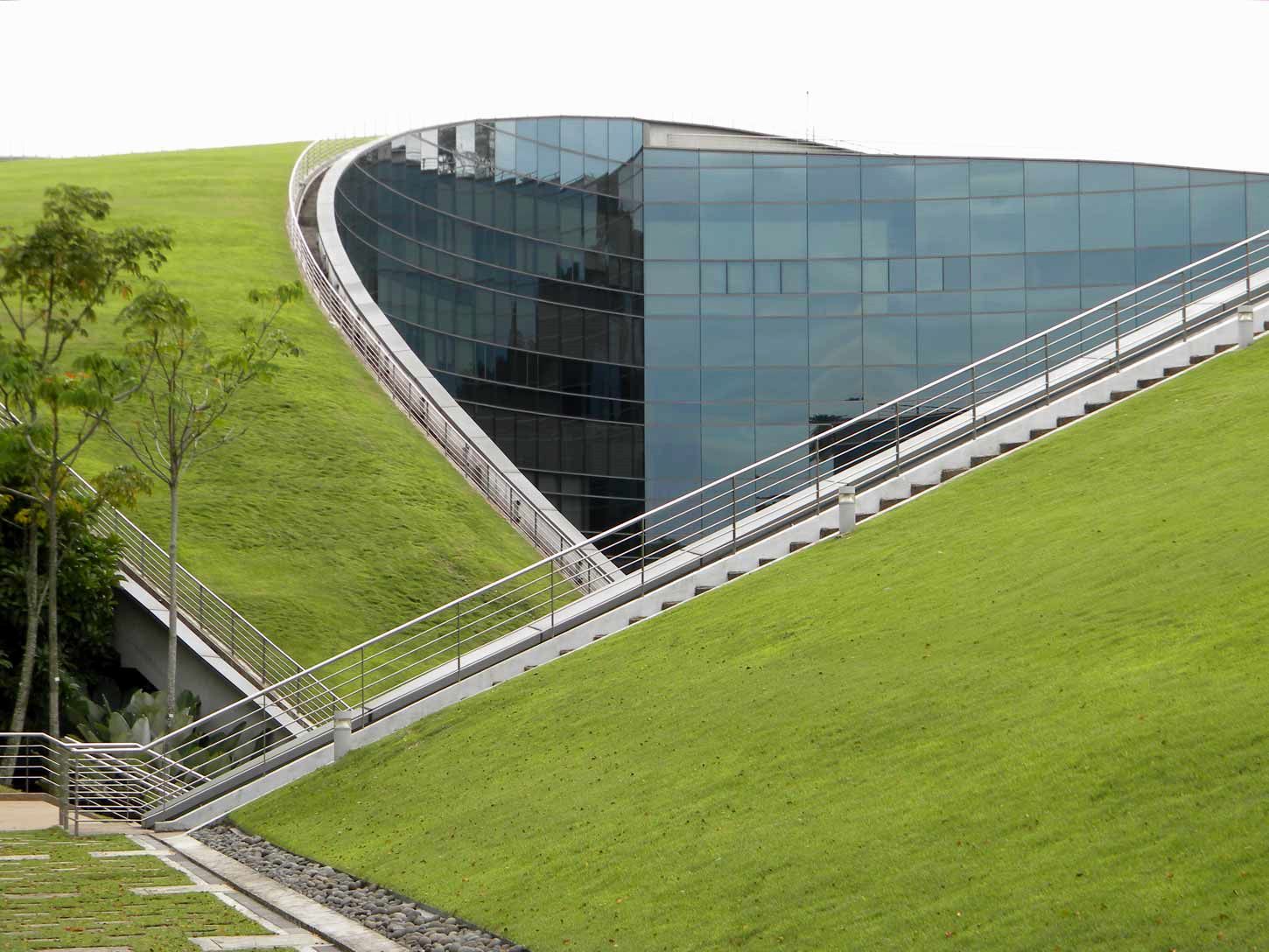 The green roof on one of Singapore’s two largest universities, made from reinforced concrete with deep ribs in its surface, dominates this structure, perching dramatically off of it at a nearly 45-degree angle. The building’s mishmash of stories surrounds a striking almond-shaped central courtyard, with reflections bouncing off the double-glazed panels on the interior walls. 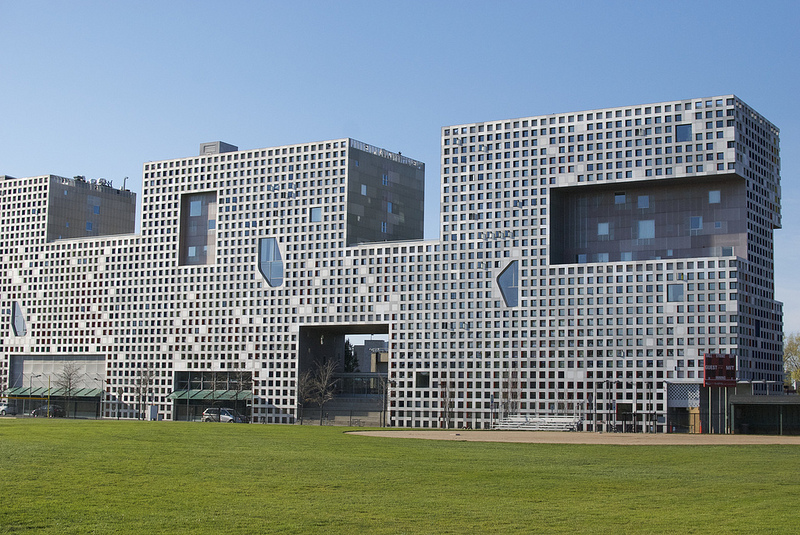 The design of this undergraduate dormitory is based on porosity, which means that, like a sponge, it has many passages and openings. Standing 10 stories tall and 382 feet long, Simmons Hall represents a vertical slice of a metropolis, boasting a 125-seat theater, a night café, and street-level dining. As if all that weren’t enough, the building also employs a cycle of programmatic and biotechnical functions to keep natural light in check concurrent with upward-moving air. 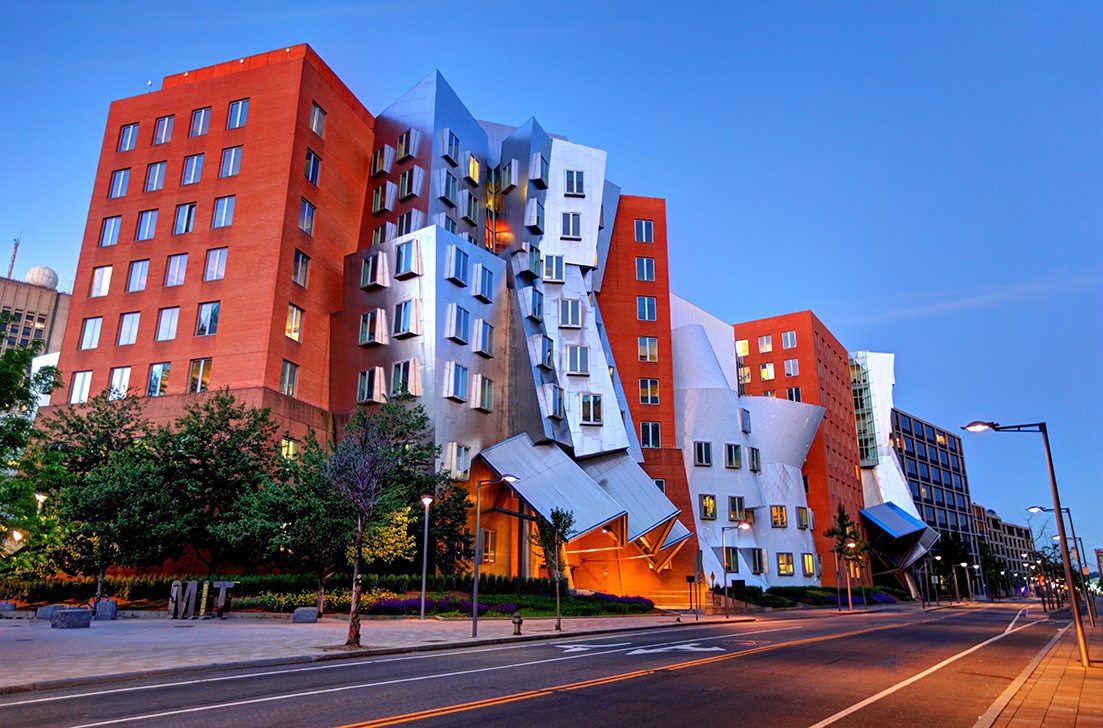 Dedicated to MIT’s Computer, Information, and Intelligence Sciences programs, the Stata Center consists of 47 exclusive elements made from a range of different materials, from brick and glass to architectural metals like aluminum, titanium, and stainless steel. The building’s profile is often compared to something out of Dr. Seuss’ Whoville. 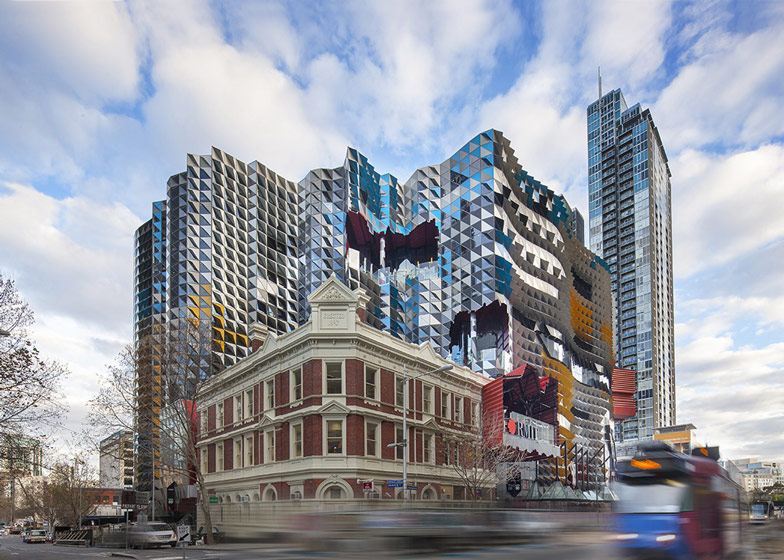 No matter how you turn your head, the image of RMIT will always make you feel like you’re halfway between upside-down and inside-out. The walls vary between curved and folded, resulting in a string of toothed edges that make the surfaces look as if they’re breathing. Pixilated images of the neighboring buildings add color and further fuel the campus’s disorienting effect. 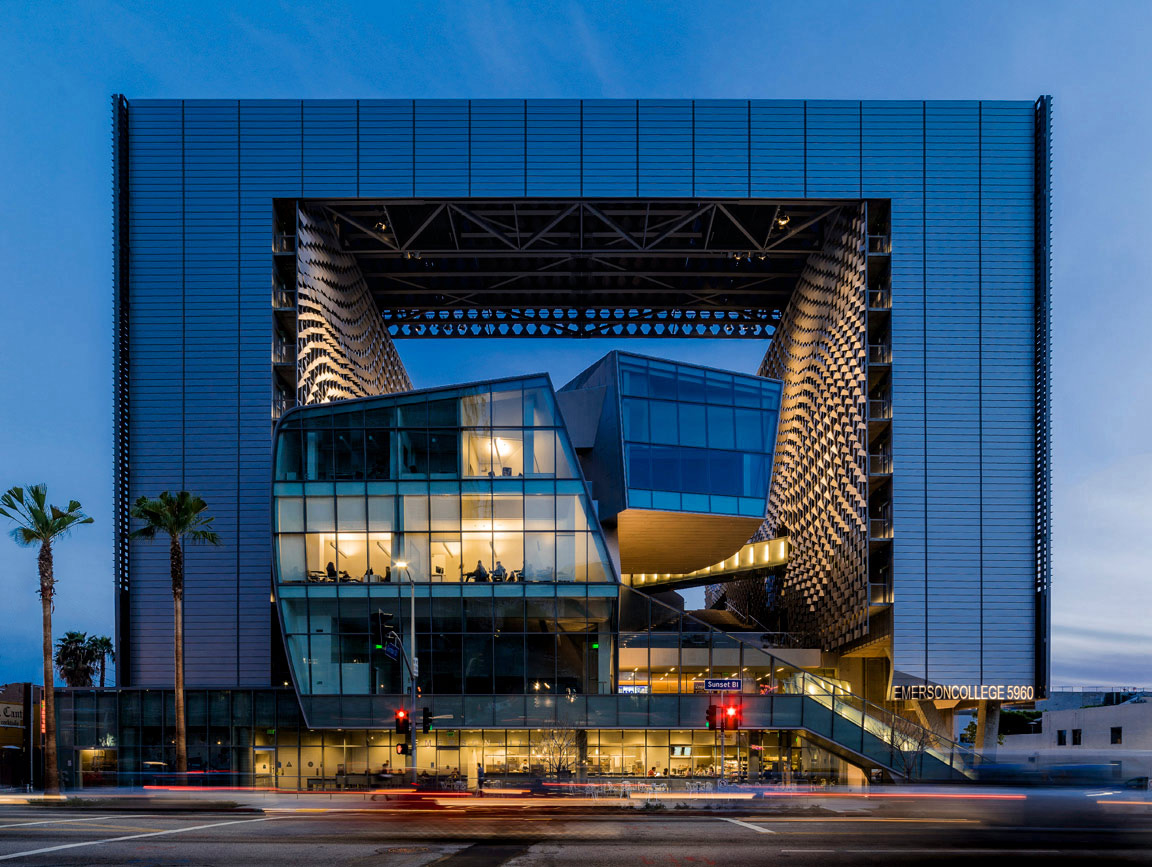 Touted as a place where students live, study, and work, Emerson LA is topped by a helipad (a city-wide requirement for any building over 10 stories tall). Its design uniquely connects two dorm structures, which themselves provide lighting for the al fresco performances in a second-story courtyard and amphitheater. The resulting blend of in and outdoor spaces creates a campus that looks like an oversized piece of engaging modern art. 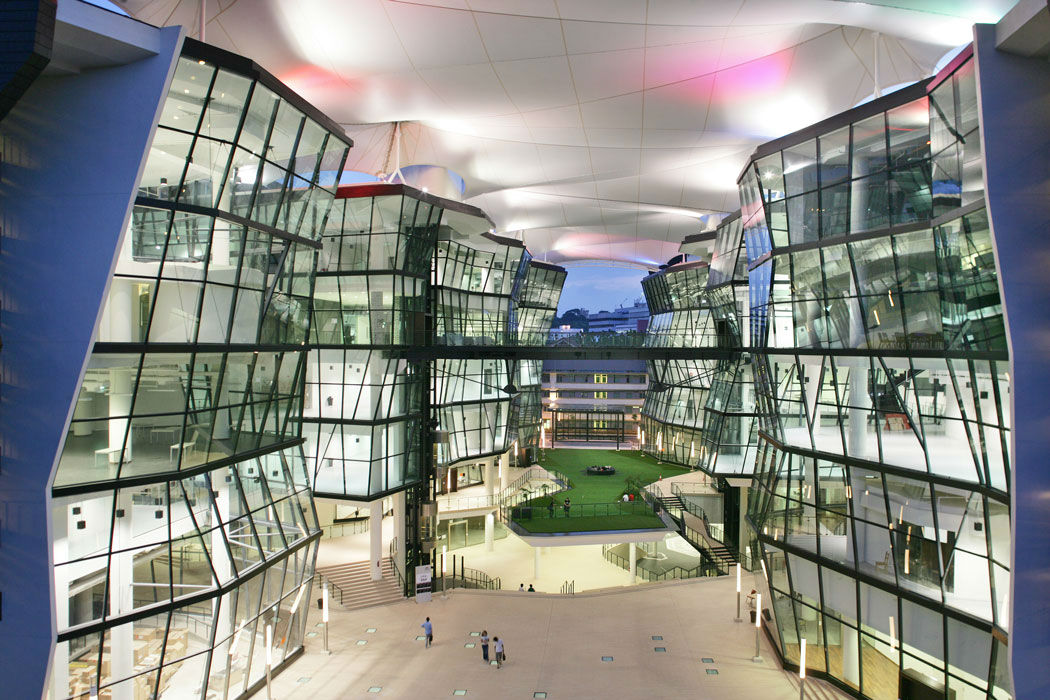 Ingeniously combining the best of outdoors and indoors, the exterior of this structure is dark and foreboding, consisting of a mixture of stone, aluminum, and irregularly shaped windows that can’t help but mesmerize. Inside, a network of linking hallways and sky bridges allows for the steady circulation of air and natural light. 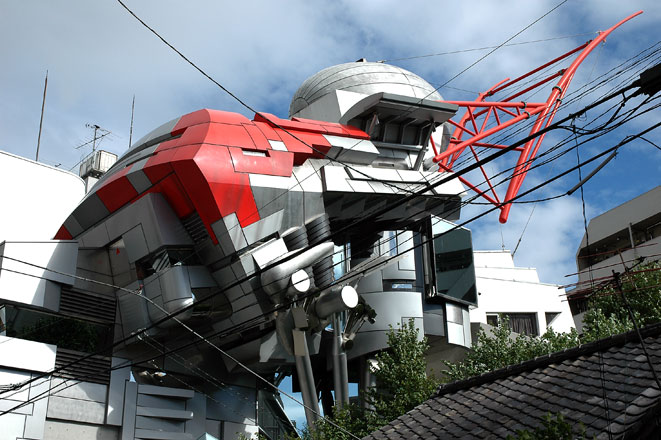 When architect Makoto Sei Watanabe completed this spellbinding work in 1990, he likely had no idea that the design would feel so timely in the 21st century. The fascinating structure looks like a transformer robot and over time has reinforced Watanabe’s belief that “architecture ought to be something capable of moving people’s hearts and giving them a physical thrill in a way possible in no other art.” 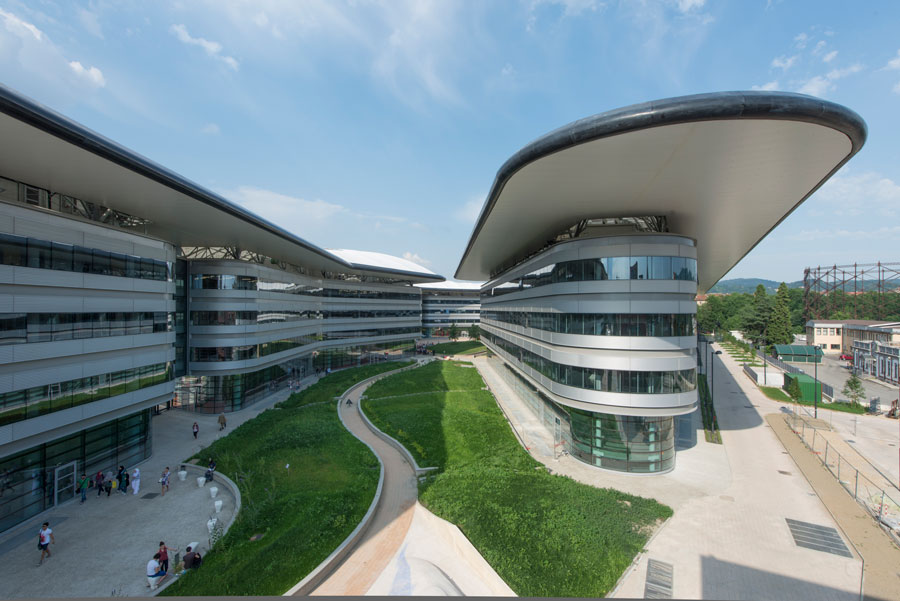 Keeping in mind the appeal and practicality of a conventional sheltered quad comprised of two linked buildings joined by a single canopy roof encircling a central courtyard, this Italian gem neatly wraps new spaces in time-honored packaging. It features a four-story library, private courtyard entrances for each department, lecture halls, and private offices on separate floors. The school’s 500-seat auditorium can even be divided in half to host two events simultaneously.