The Hamptons aren’t exactly known for being discreet. This grouping of hamlets and villages on the eastern tip of Long Island is renowned as a summer enclave for celebrities and other wealthy New York City residents, with ostentatious luxury cars clogging up country roads that are totally quiet in other seasons. Beach house rentals can cost upwards of $400,000 for a single month, and glitzier residences tend to shout their price tags all the way down their long, winding driveways. 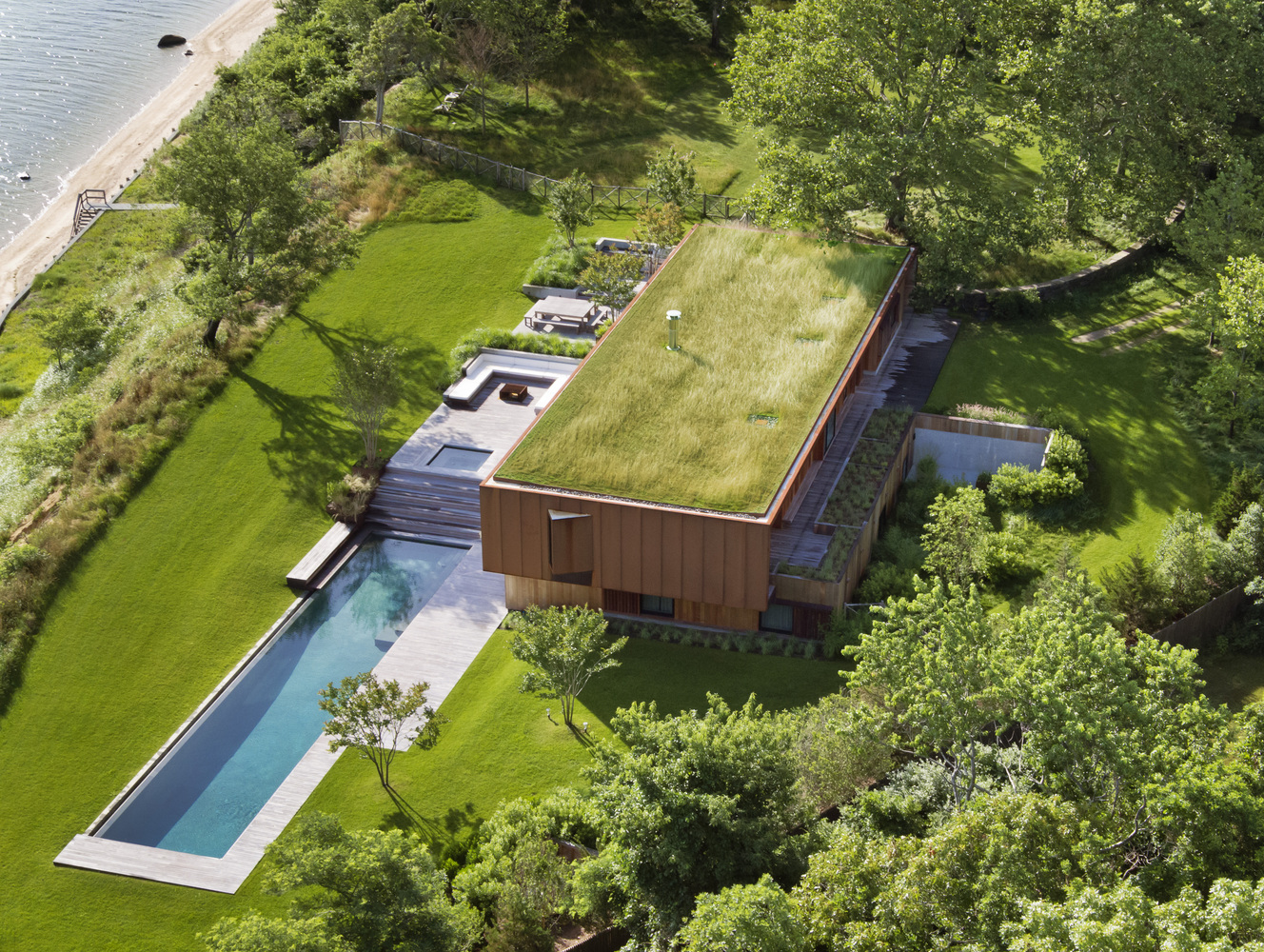 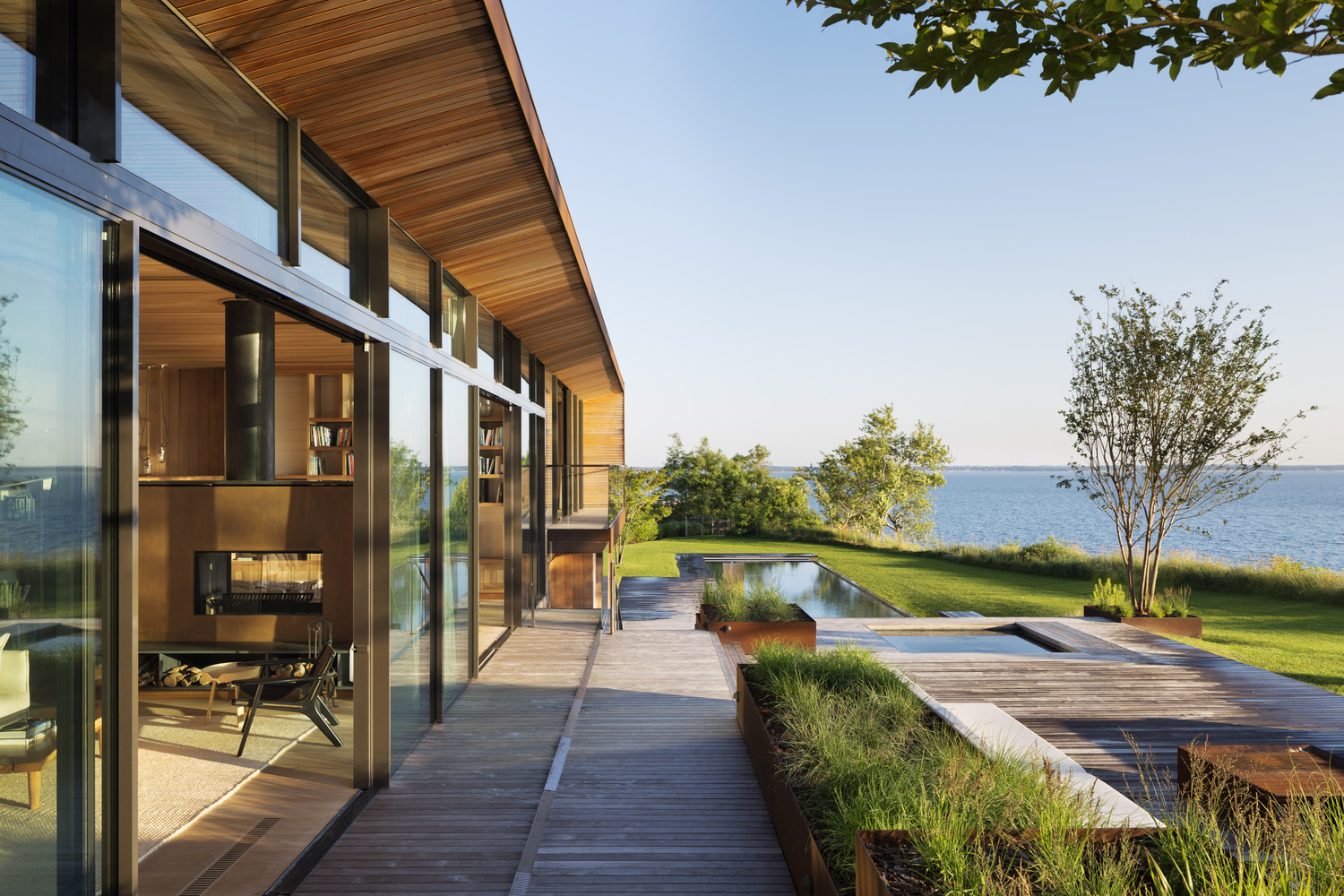 While much of the architecture does draw, at least marginally, upon the local vernacular, as well as the historic character of humbler eastern Long Island structures, it often does so in the form of sprawling floor plans, multiple tennis courts, and wide swathes of manicured, topiary-spotted lawns.

But look beyond the flashy mansions, and you’ll find a breezy, laid-back beach town culture full of permanent middle-class residents — and at least one high-end weekend getaway that aims to set a good example for seasonal guests. To achieve such an effect, the couple behind that getaway approached New York City-based interior design and architecture firm Mapos in hopes of finding the antidote to stereotypical wealth-flaunting Hamptons homes. 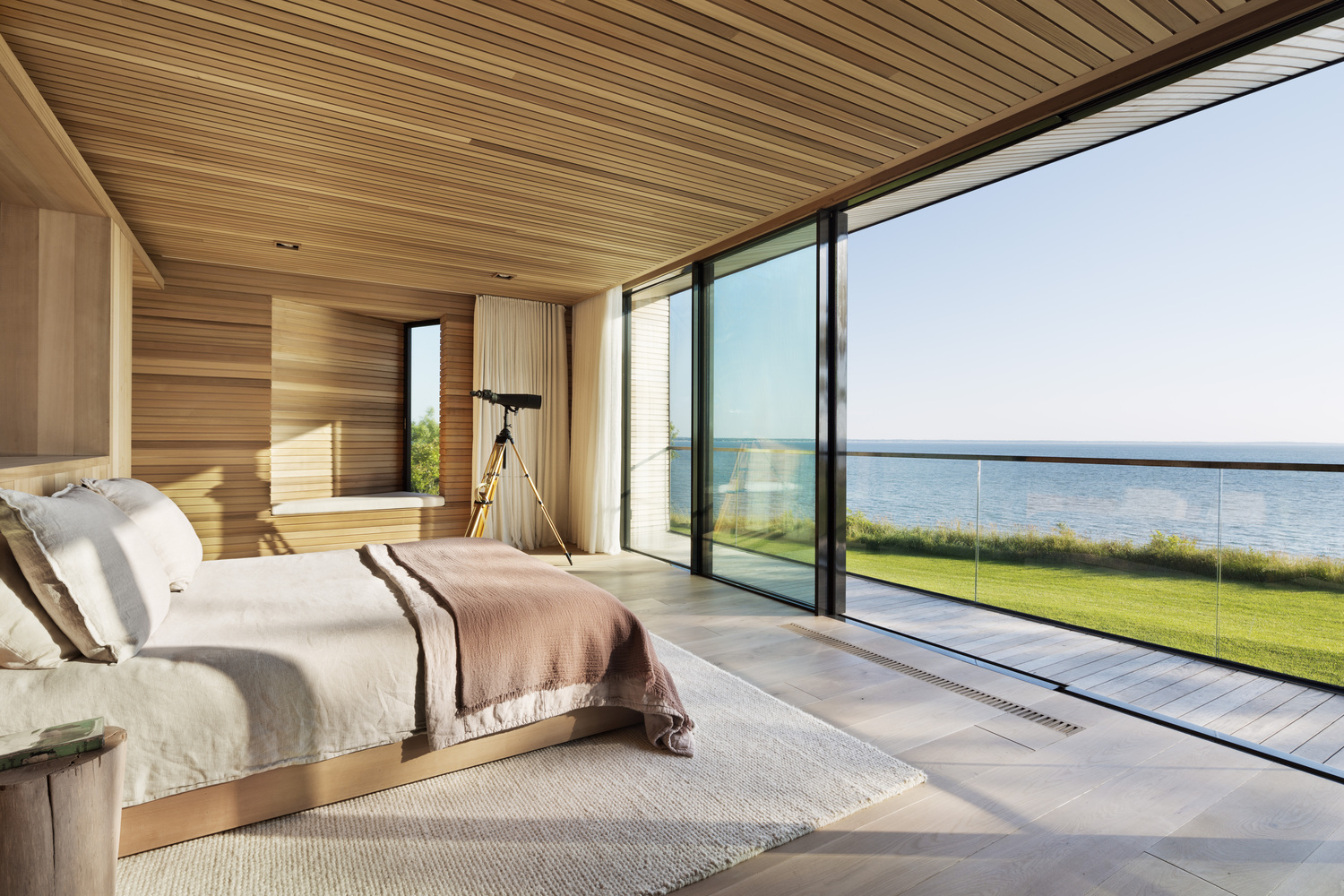 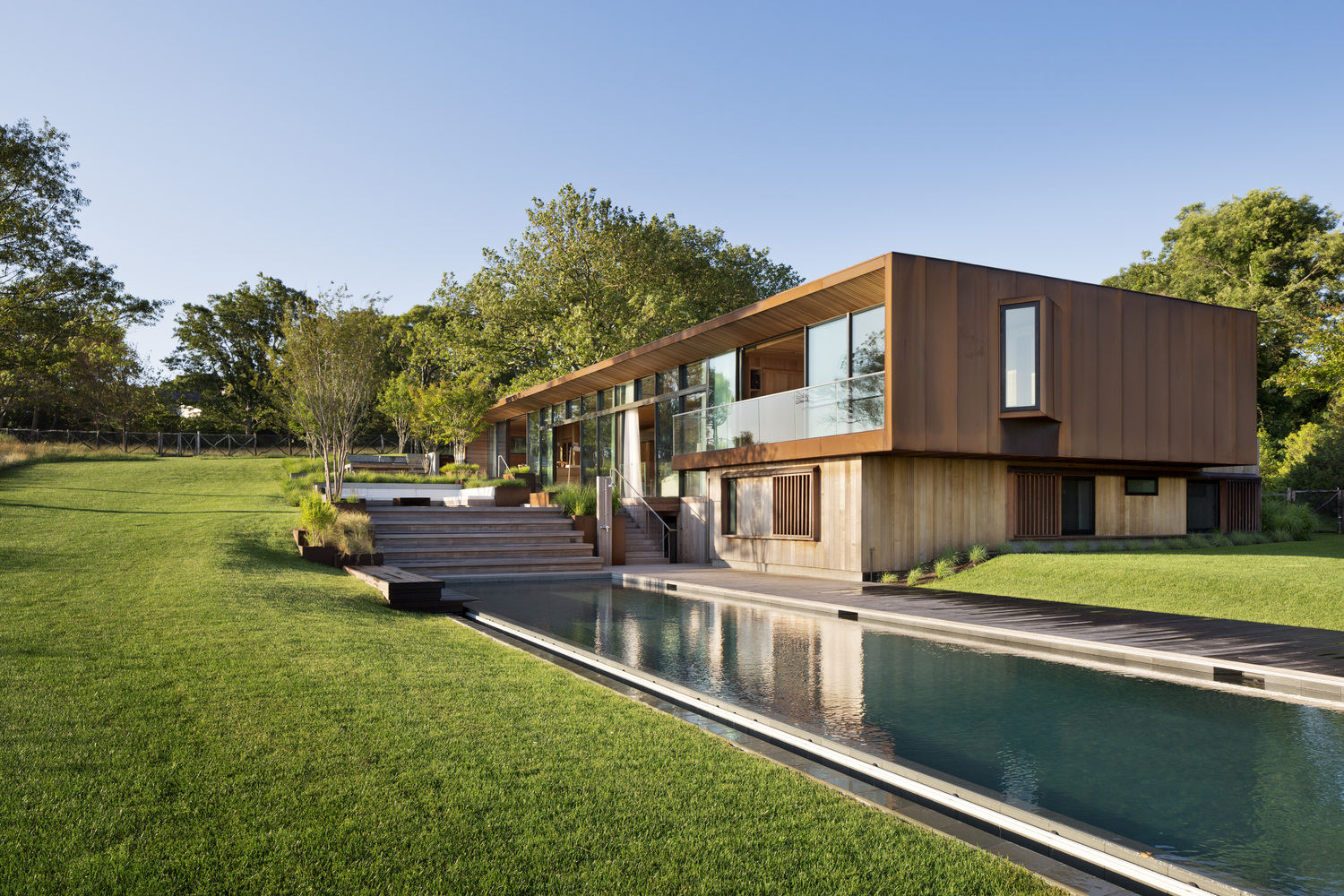 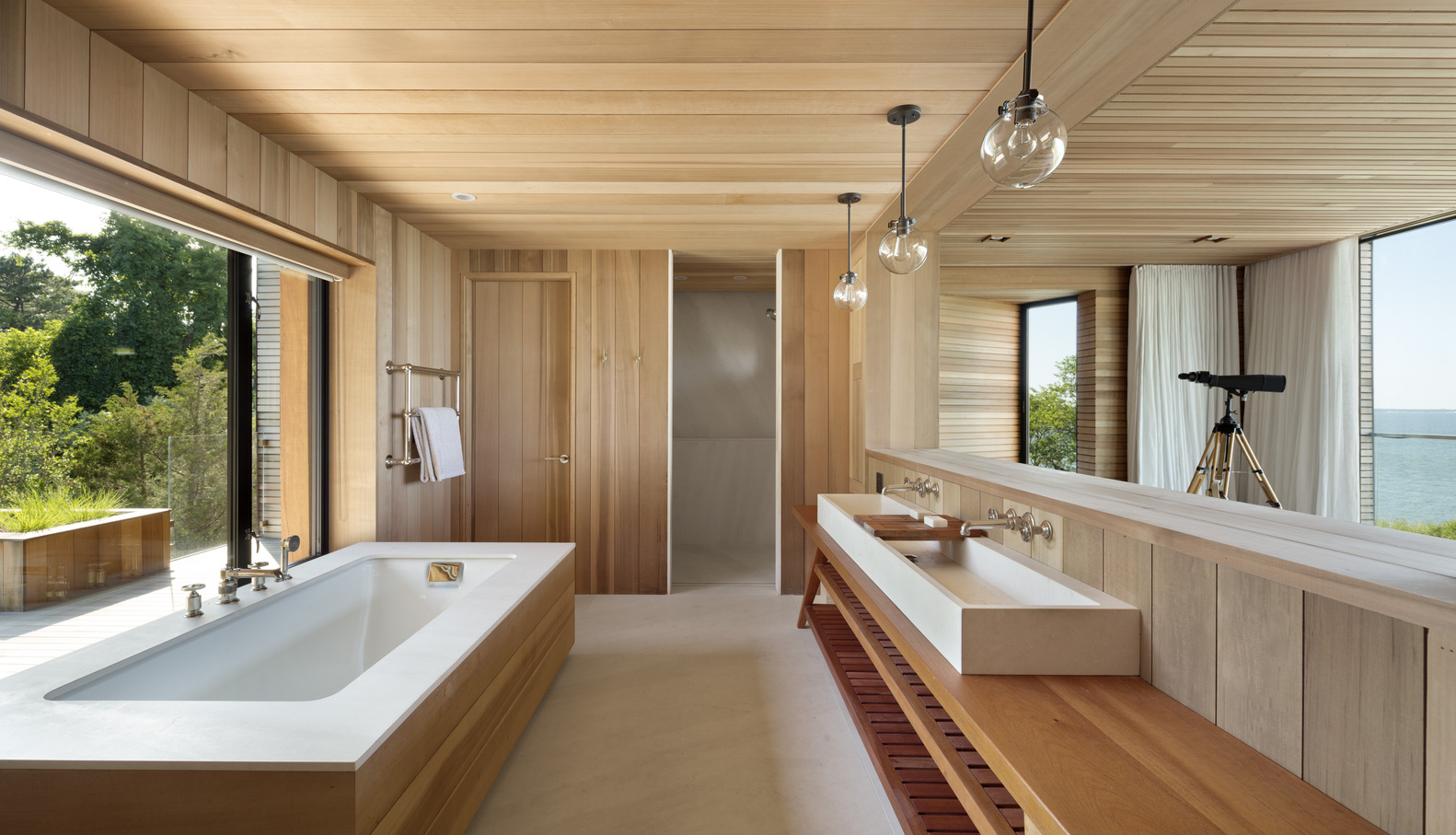 Owners of a global French beauty brand, the clients wanted a timeless, multi-generational family retreat that paid tribute to its sensitive shoreline building site, incorporated the latest sustainable technology and design strategies, and exuded a streamlined classic beauty. The family wanted to keep as much of the existing greenery intact as possible, including a 70-foot-tall old-growth sycamore tree in the meadow. They even requested a natural palette of raw, unfinished materials to complement the spirit of the location.

The result is Peconic House: a sustainable home for the 21st century, and one free of flashy pretensions. Lying low to the ground, the custom 4,000-square-foot holiday home is tucked into a hill just north of the great sycamore and topped with a green roof that’s covered in native meadow grasses. When approaching from the road, you can barely see the house, gazing out over it to the water beyond. Not only does the roof help the structure blend into the surrounding landscape, but it also minimizes the project’s impact on the watershed. 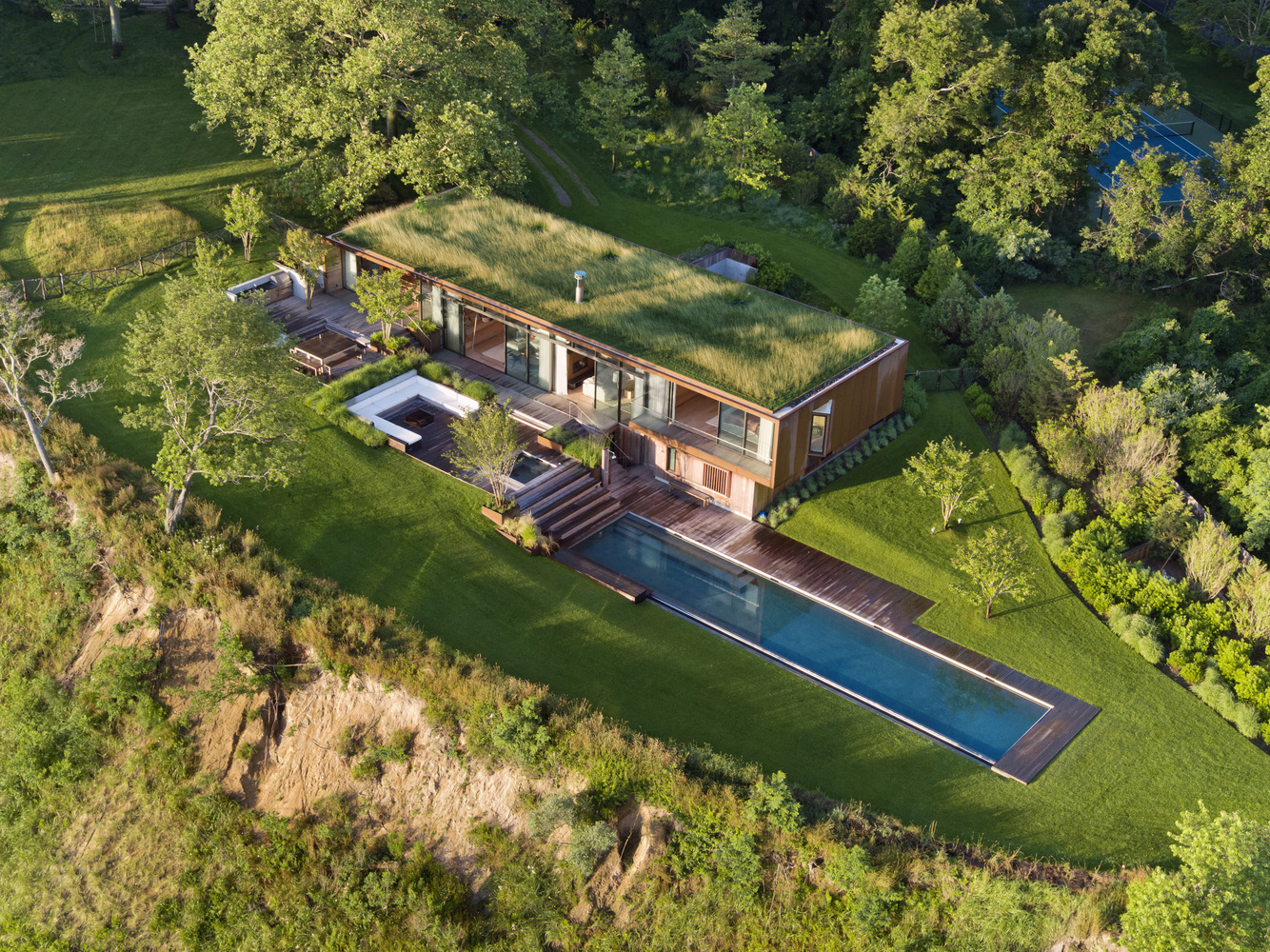 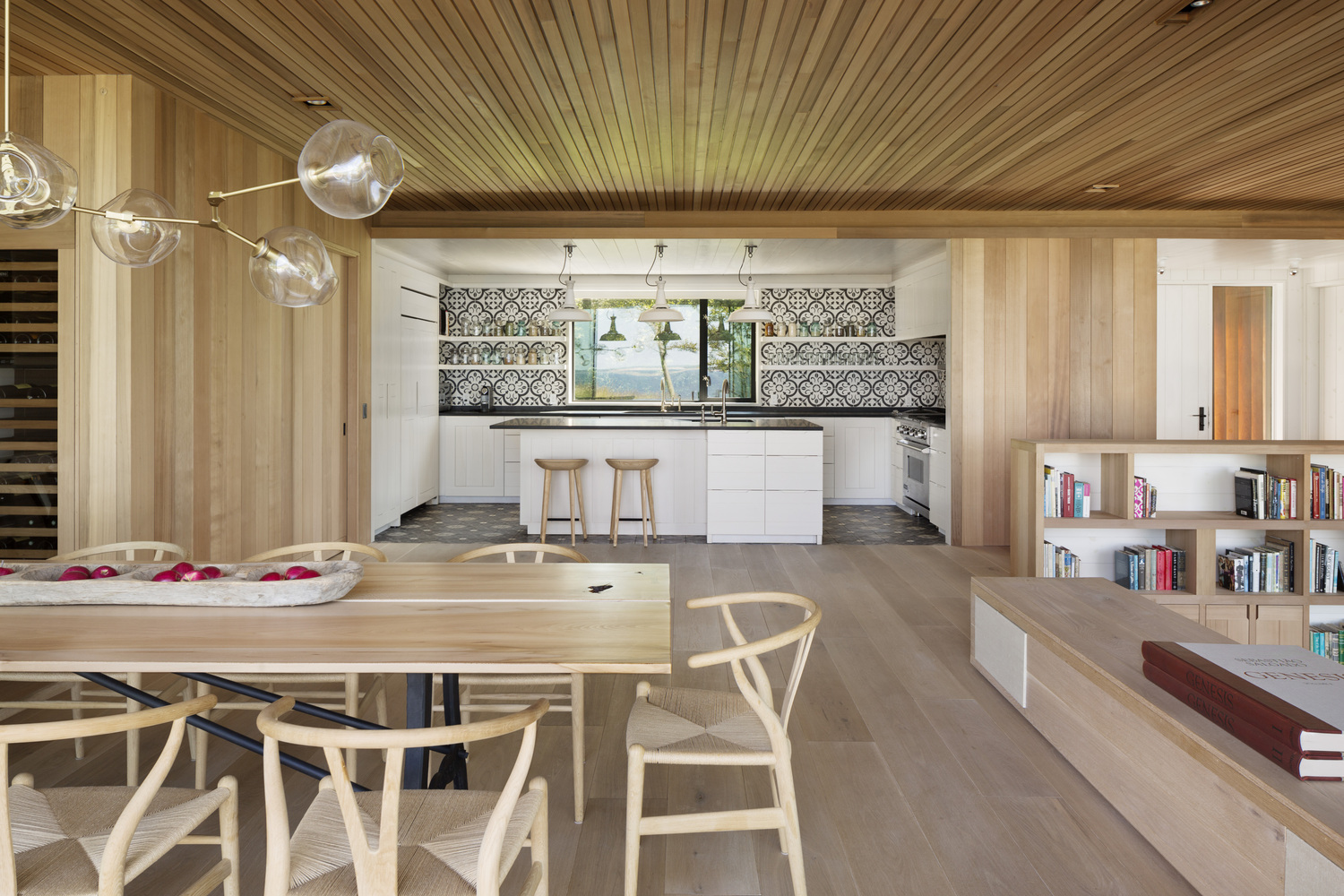 A 200-foot terrace steppes down to the beach in a series of recreational outdoor spaces, including a glittering 75-foot infinity-edge swimming pool. Corten steel, cedar, concrete, and reclaimed ipe wood mimic the natural tones of the environment, and as they age, they’ll develop a rich patina that will further blend them into their surroundings. The living room offsets east-west views of the Peconic Bay with a 100-foot-long glass wall, which itself is framed by unfinished cedar and reclaimed white oak. 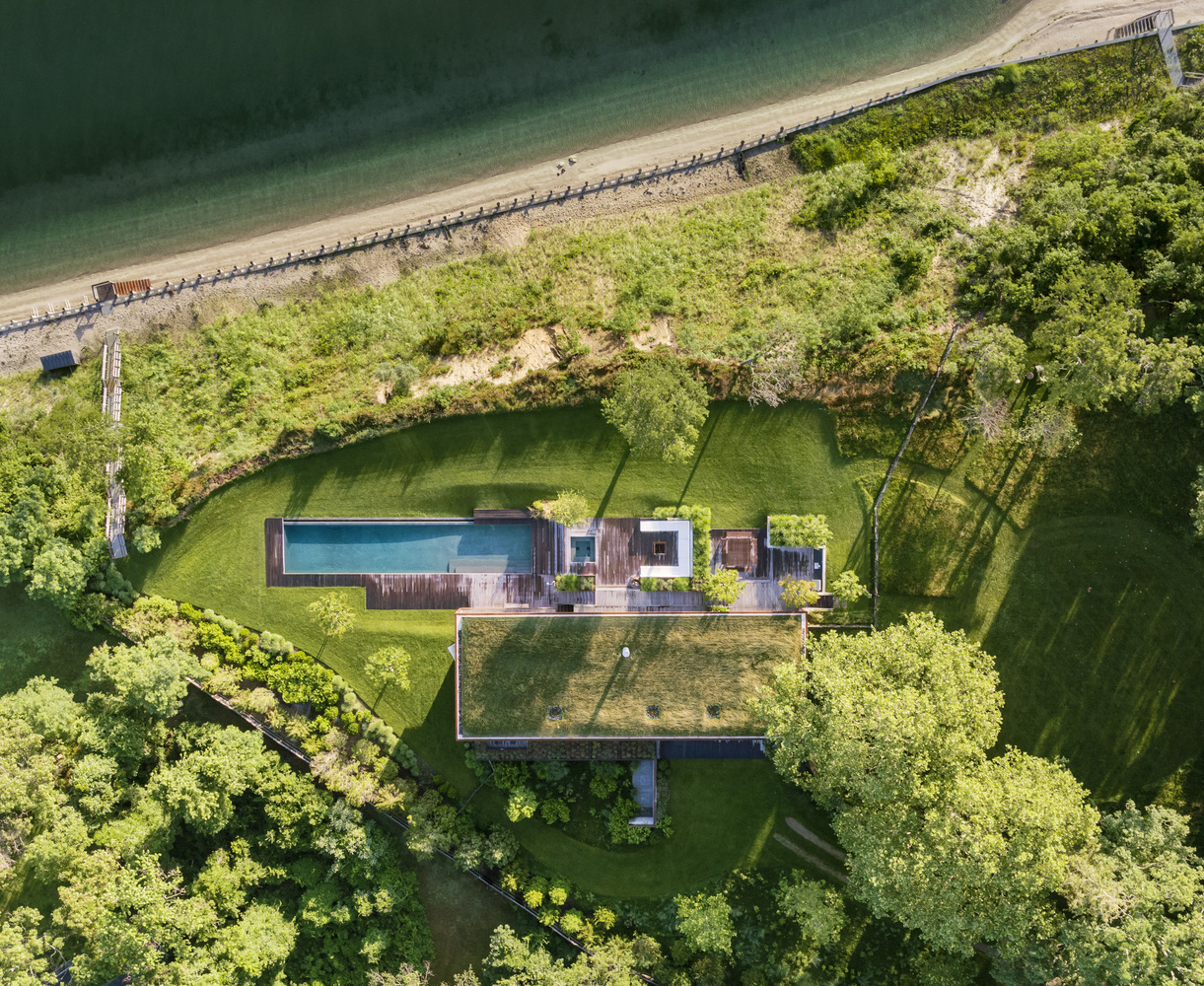 The architects say of the project: “Every design decision supports this blurring of built environment and nature: the green roof promotes biodiversity while its cantilevers provide daylight harvesting in the morning and shade in the afternoon, and articulation of the east elevation creates a prow-like bay window for the master bedroom. The interiors’ abstraction and literalness play off one another, and intimate an overall sustainability strategy that makes this project as sympathetic to the environment, performance-wise, as it is visually.”