In the Indian city of Chandigarh, a ribbon-like sculpture made of hand-carved timber aims to serve several purposes at once: offering a functional work surface, making a statement about the value of wooden art, and paying homage to a long history of craftsmanship. Crafted by local firm Studio Ardete, which consists of designers Badrinath Kaleru and Prerna Kaleru, “Timber Rhyme” is presented alongside a reverent chronicle of a caste of traditional Indian carpenters known as the Sutradhar. 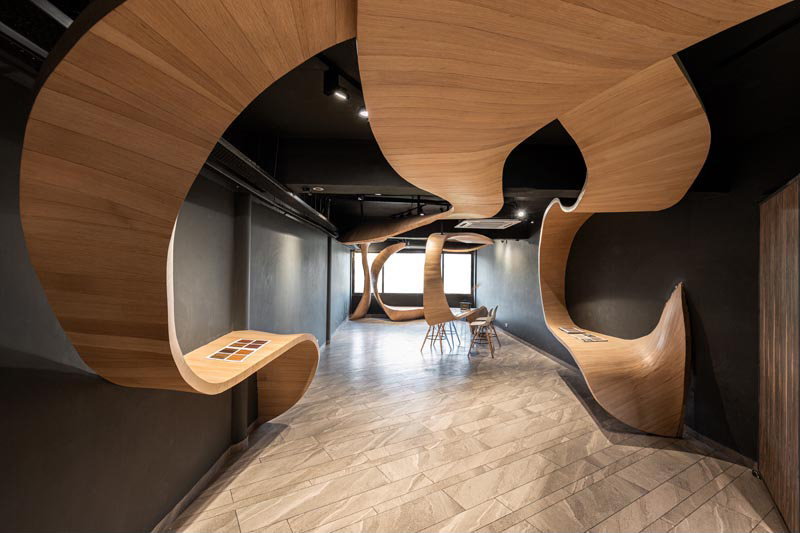 These carpenters are said to be descended from Maya, son of the “divine engineer” deity Vishwakarma. For millennia, they’ve handcrafted everything from utensils to chariots to ships, organizing into guilds where fathers passed on their techniques as master craftsmen to their children. More impressive still, every family, religion, and region has its own style.

But, as the designers note, “traditions cannot outlive time,” and there are concerns that the Sutradhar art may not survive things like mass deforestation, the increasing cost of wood, and the amount of labor required to complete each piece. The government has even suggested that the craftspeople start using plywood in place of timber. 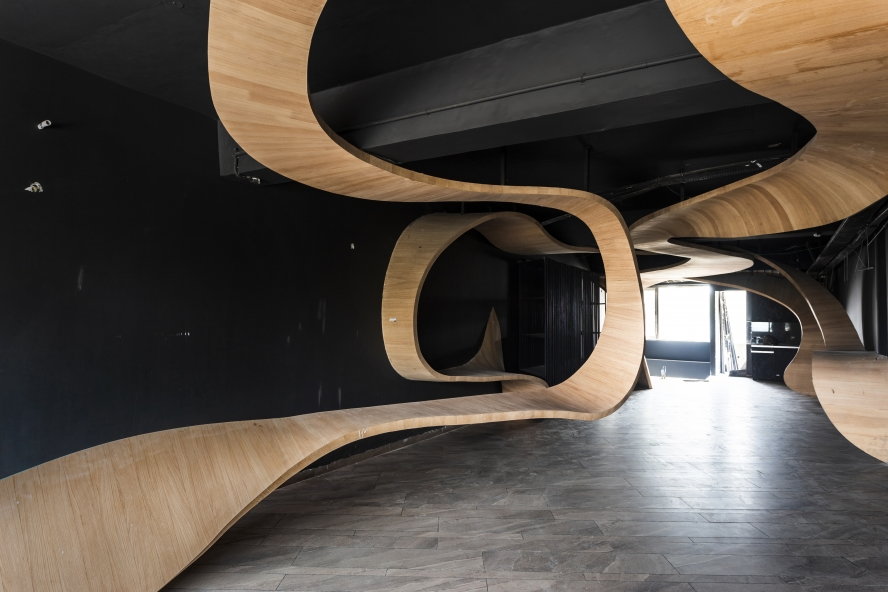 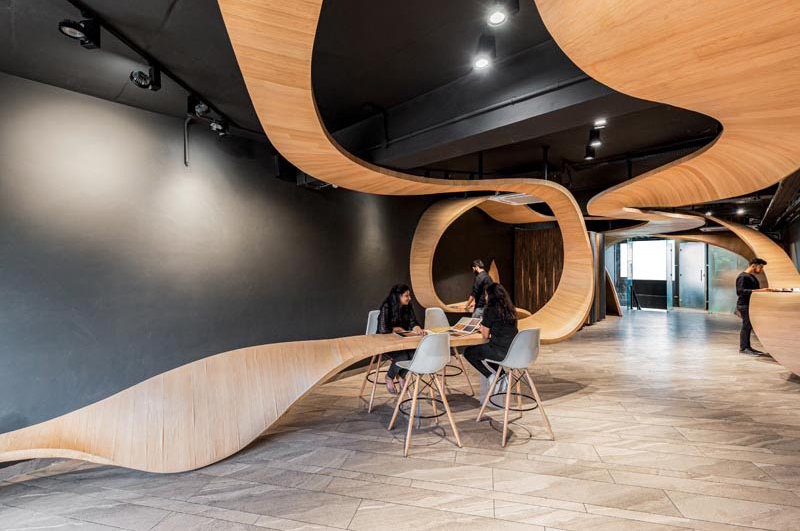 Occupying the first floor of a retail shop in a market complex, “Timber Rhyme” invites visitors to walk through and experience the piece in full and contemplate how the artform must evolve to remain relevant and accessible in the modern world. It’s made of digitally fabricated plywood ribs that are connected in a waffle-like pattern to achieve unique curvatures.

Once assembled, they’re almost self-supporting, with black metal bars connecting them to the ceiling in some areas and transparent acrylic supports holding them aloft in others. The design is reminiscent of the “Superdesk” created for an office by Clive Wilkinson Architects, but the possibility of functional use is far less important here — almost an afterthought. 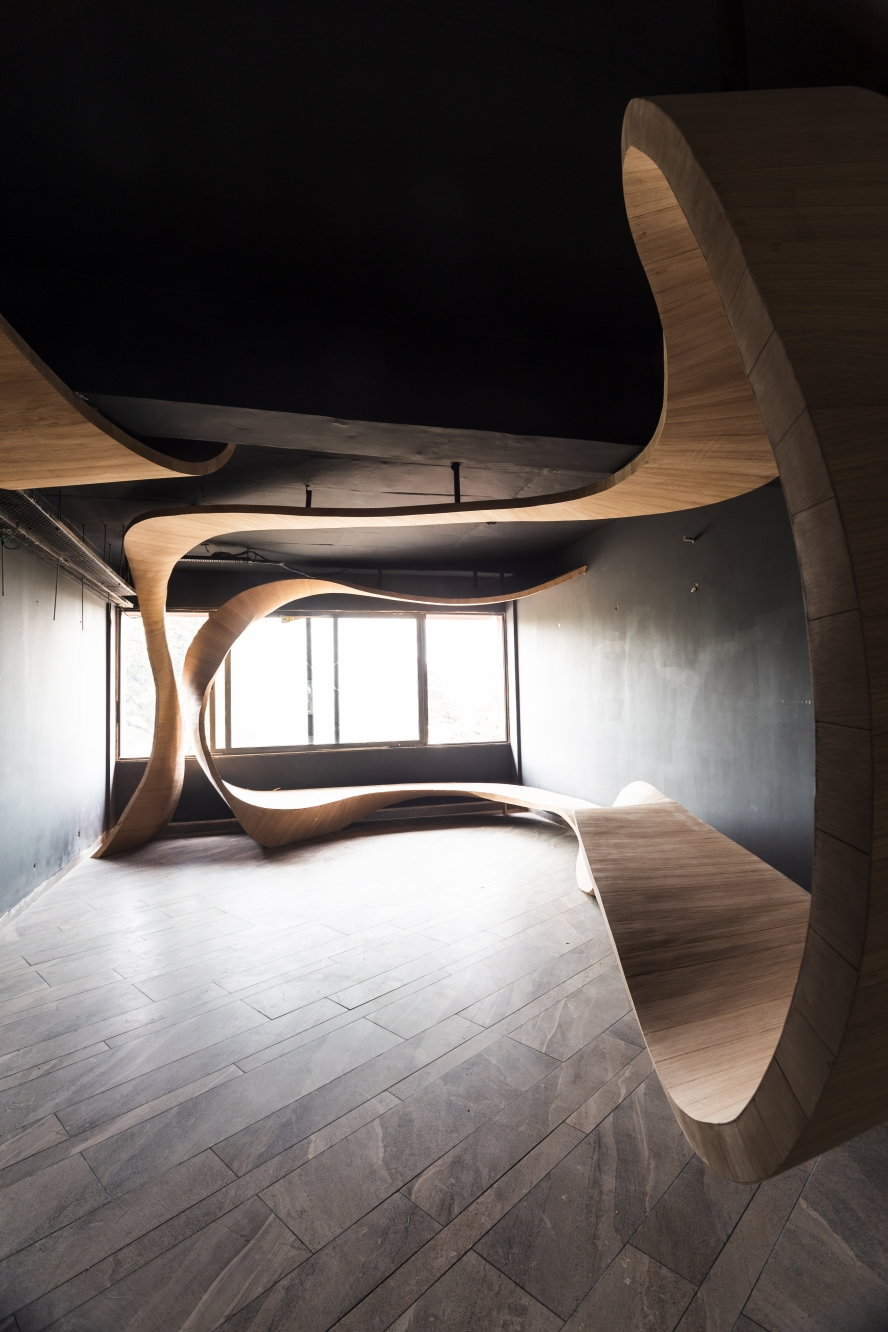 The architects explain: “Represented through the ribbon that pours itself into space, ‘variety in a unified continuum’ nourishes our concepts. The ribbon is envisioned to blur the boundaries between the static, the movable, and the art both in and on these components of the built space. [The] role of static elements like partition screens is obfuscated with that of movable furniture. Propounding as a functional art space, a series of ‘wooden ribbons’ twist and turn to form the display shelves, sitting spaces, meeting tables, and other design elements each flowing into the other. This transcends the interior into an art-landscape.”

“This amalgamation of technology for cost, time, and ease of making with an advantage of old craft is a win-win situation for all stakeholders of the project. The retail shop becomes a setting befitting for a dialogue between the carpenter, the end-user, and the retailer, [thereby] deepening social engagement. As plywood-carpentry meets its entropic spiral, ‘Timber Rhyme’ hopes to create an opportunity to re-imagine [the] craft of the traditional curves as an inexhaustible source of inspiration for the next generation of torchbearers of intricate carvings.” 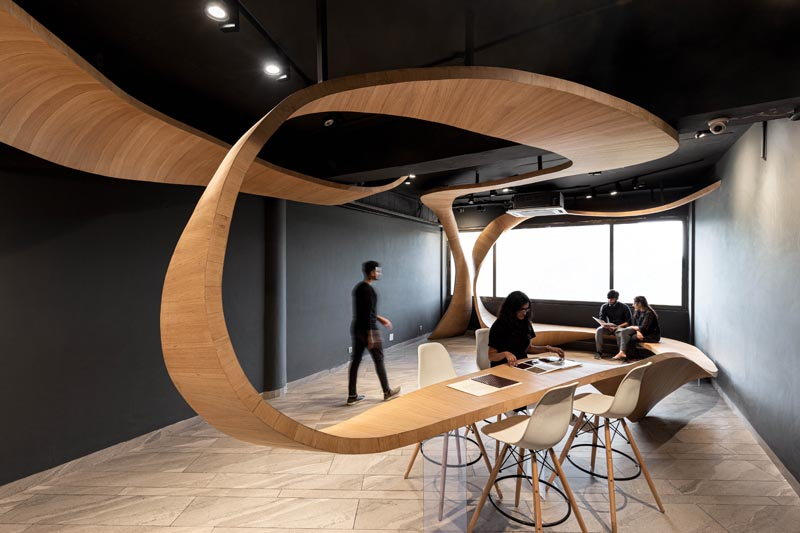 Photos show the piece before it was put into use in its retail context, but it would be nice to see it in use, too. In any case, it’s a thought-provoking meditation on the resiliency of craft and tradition in a rapidly changing world.