The world’s largest redwood sculpture was carved from a single tree by 20 people over the course of three years. Undertaken in 2012 and finished in December 2015, the “Oriental Lion” (as it’s popularly known) was transported over 3,000 miles from a workshop in Myanmar to its final destination in the Fortune Plaza Times Square in Wuhan, the capital of China’s Hubei Province. 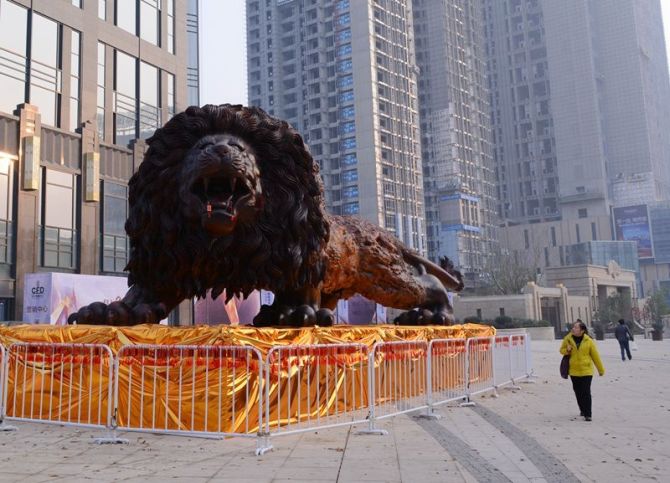 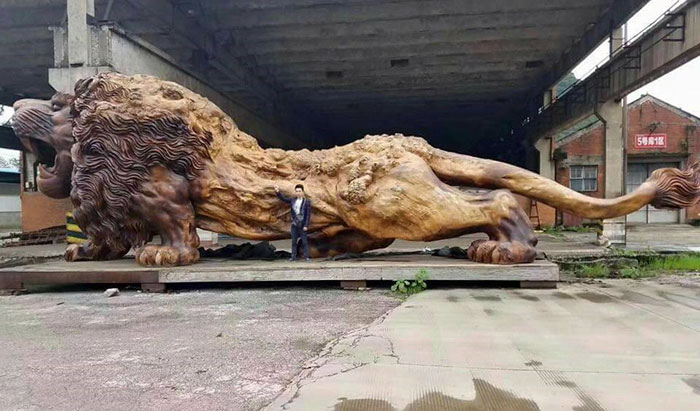 Measuring 47-and-a-half feet long, 16-and-a-half feet high, and 13 feet wide, this king of the concrete jungle has gone on to be included in the Guinness Book of World Records, officially making it the world’s largest redwood sculpture. 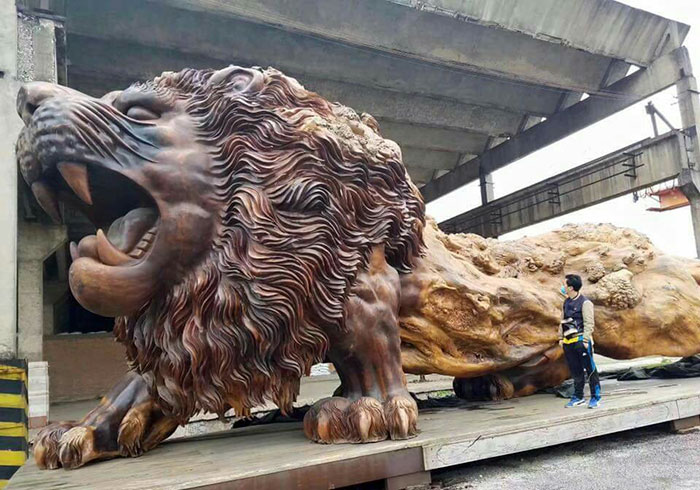 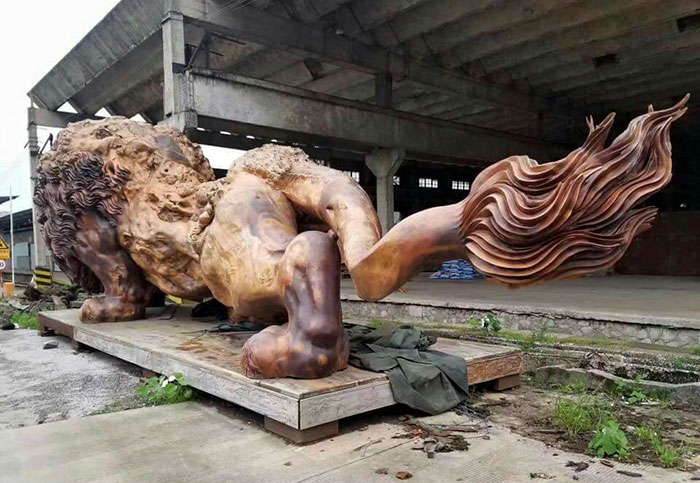 Conceived of by Chinese architect Dengding Rui Yao, Oriental Lion honors the imperial Chinese tradition of depicting guardian lions, or “shi,” in sculpture. The concept of guardian lions, also known as “Imperial Guardian Lions,” stems from Chinese Buddhism. During China’s dynastic period, shi traditionally stood in front of palaces, tombs, and the homes of wealthy government officials. Today, some fine examples can still be seen protecting the entrance to Beijing’s Forbidden City. Guardian lions date back to the Han Dynasty (206 BC – 220 AD) and are still used as powerful symbolic and decorative elements. 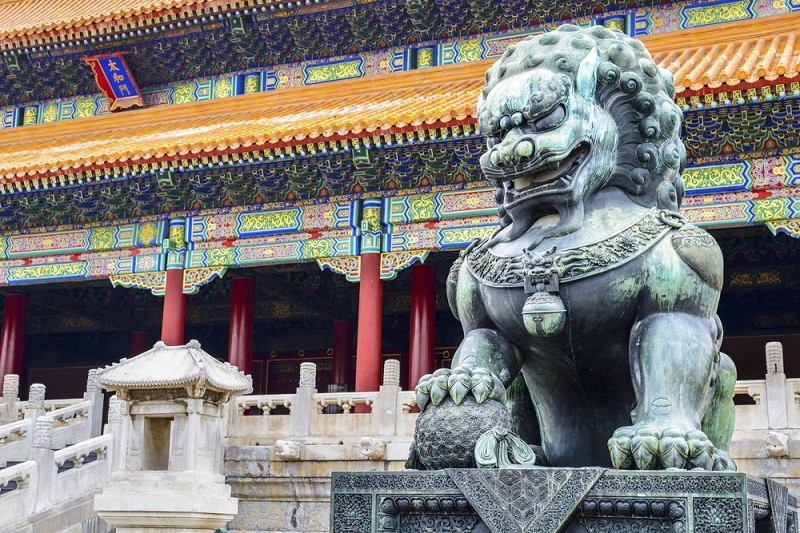 Nowadays, stylized guardian lions can be found outside restaurants, supermarkets, and hotels — in China and also in Chinatowns around the world. While these protectors are usually depicted in pairs to represent the “yin (female) and yang (male)” duality of life, it seems unlikely that the Oriental Lion will be receiving a companion sculpture any time soon. Its sheer size would surely be too daunting to recreate. The lion’s sides are rough-hewn like the bark from which it was made, while its back and roaring head have been smoothed out to create a sleekness of form. 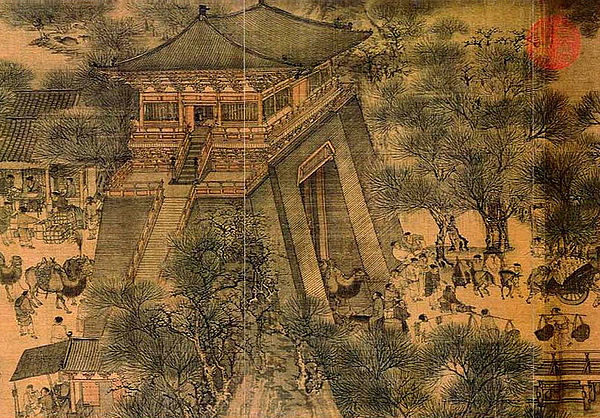 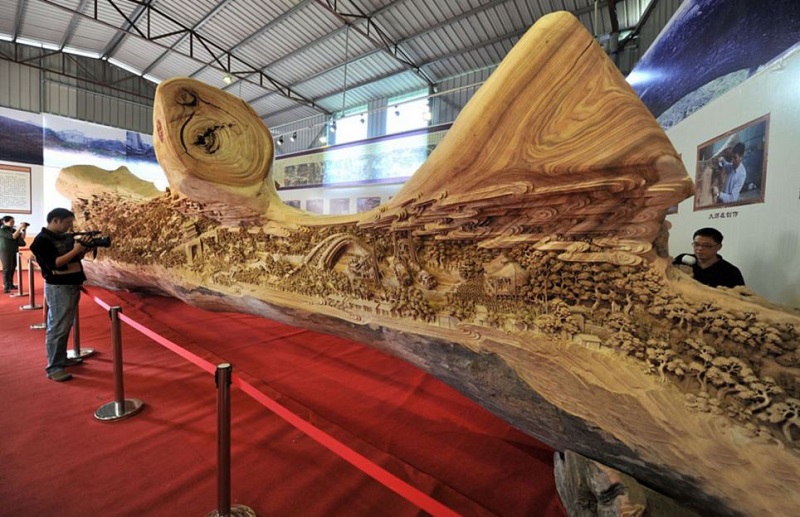 Though Oriental Lion is the largest-ever sculpture created from a redwood tree, the longest continuous wooden sculpture was completed a couple of years earlier. Interestingly enough, it was also carved in China. Created over a period of four years by Chinese artist and renowned woodcarver Zheng Chunhui, it was unveiled in Fujian in November 2013. Measuring just over 40 feet long, the sculpture recreates “Along The River During the Qingming Festival,” a famous painting by the Song Dynasty artist Zhang Zeduan. 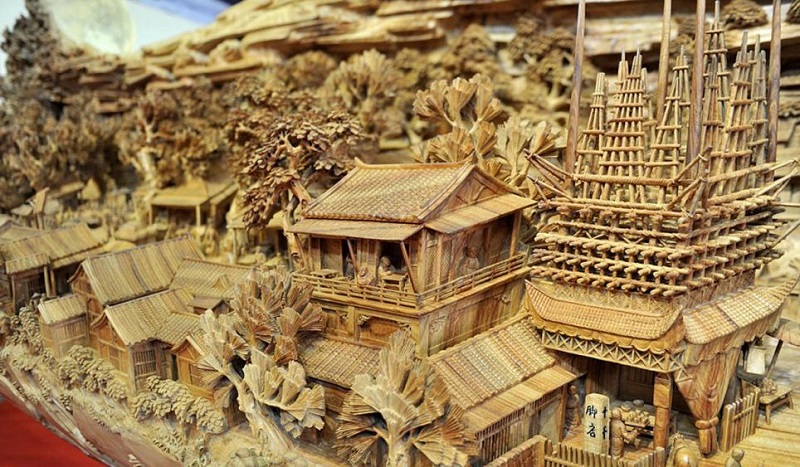 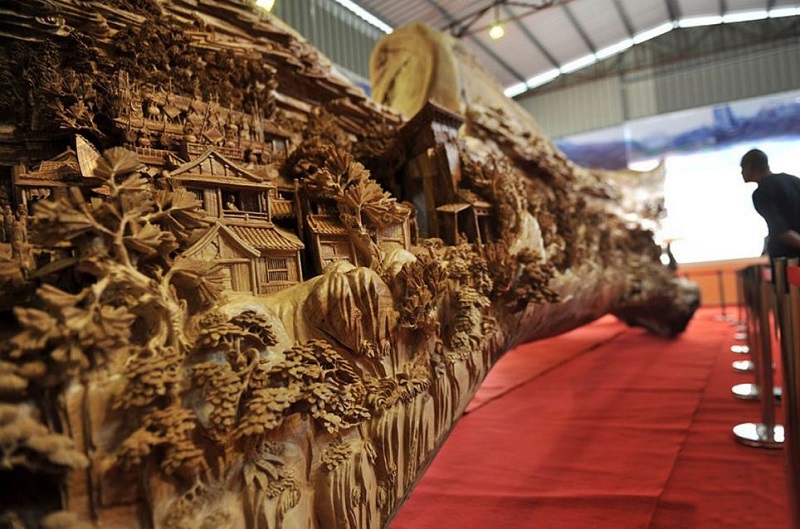 Depicting the everyday lives of Chinese people from 900 years ago, the original artwork was painted on a scroll that was designed to be opened up by hand and looked at by unrolling it from right to left. Over the years, “Along the River” has been reproduced many times. In keeping with the style of the original work, most of these replicas were painted on parchment or paper. The painting is so famous in China that it is referred to as the country’s “Mona Lisa.” Chunhui’s massive wooden take on it features 550 people herding animals, carrying cargo, and shopping at street markets. 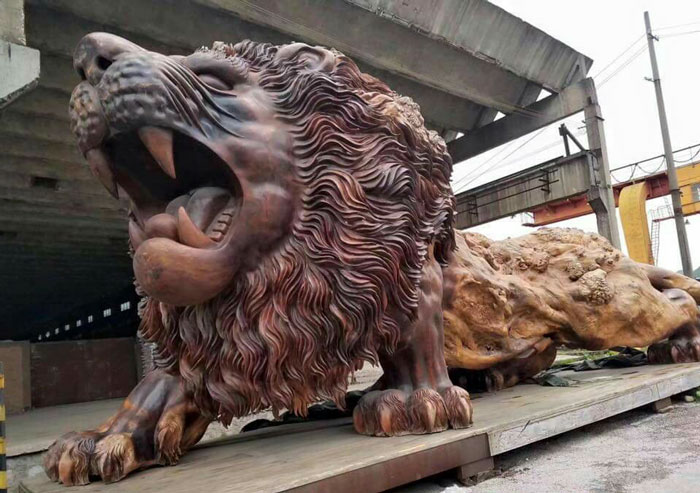 It exceeds the Oriental Lion in length, but because it is made up of several tiny scenes, Chunhui’s recreation of  “Along the River” is arguably the less impressive piece in terms of size. After all, nothing beats the sheer breathtaking nature of the lion’s scale and physical presence.