The 1950s and 60s were the golden age of air travel, when the seats were spacious, the service was luxurious, and the food was freshly cooked. Planes often had dining lounges and open bars, and flight attendants were glamorously dressed in outfits designed by the likes of Emilio Pucci. All of that feels a long way from the cramped, harried, low-quality experience typically seen on commercial flights today, so it’s easy to see why so many people are nostalgic for it. 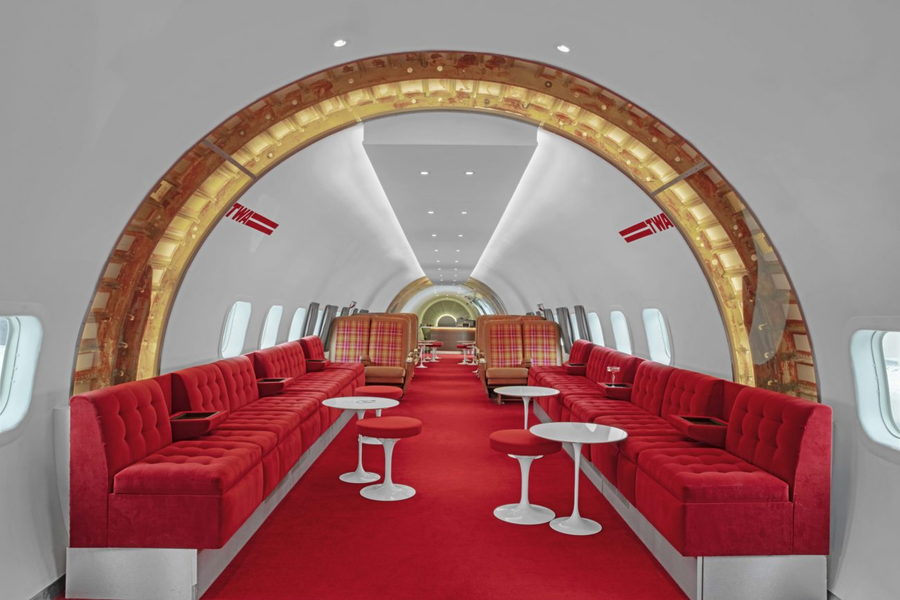 New York City-based architecture and design firm Stonehill Taylor aims to bring that feeling back at the TWA Hotel. The only in-airport hotel at John F. Kennedy International Airport, the TWA makes use of the head house of the TWA Flight Center airline terminal, designed in 1962 by renowned architect Eero Saarinen. The terminal was preciously declared a city landmark in 1994, which protected it from demolition even as other parts of the airport were knocked down and renovated around it.

The building itself already had the iconic look of air travel from yesteryear. Stonehill Taylor was brought in to infuse the guest rooms, Sunken Lounge, Connie cocktail lounge, and other public spaces with that same flair, simultaneously updating them for modern sensibilities. The design team took inspiration from the year 1962, the first time an American was able to circle the Earth and a time when aviation was “the promise of the future” signifying the beginning of a new era. 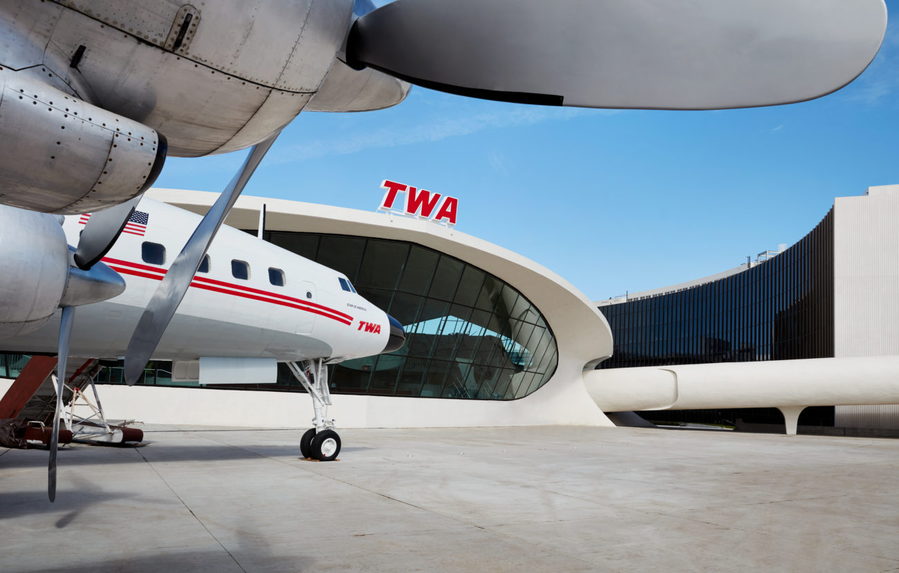 Outfitted in period-appropriate furnishings, the guest rooms enjoy views of the tarmac. There’s definitely something Mad Men about them, but you’re not entering a time warp. The vintage details that accent each space feel tasteful rather than forced, and the inclusion of TWA-branded toiletries in the bathrooms is fun.

But the standout is definitely the cocktail lounge set in the vintage Lockheed Constellation “Connie” L-1649A Starliner, which features refurbished vintage airplane seats in cherry red, banquette seating, and what the architects describe as a “reveal moment,” when guests can see the plane’s original interior frame encased in glass. The cockpit is also visible, restored with authentic controls and switches. 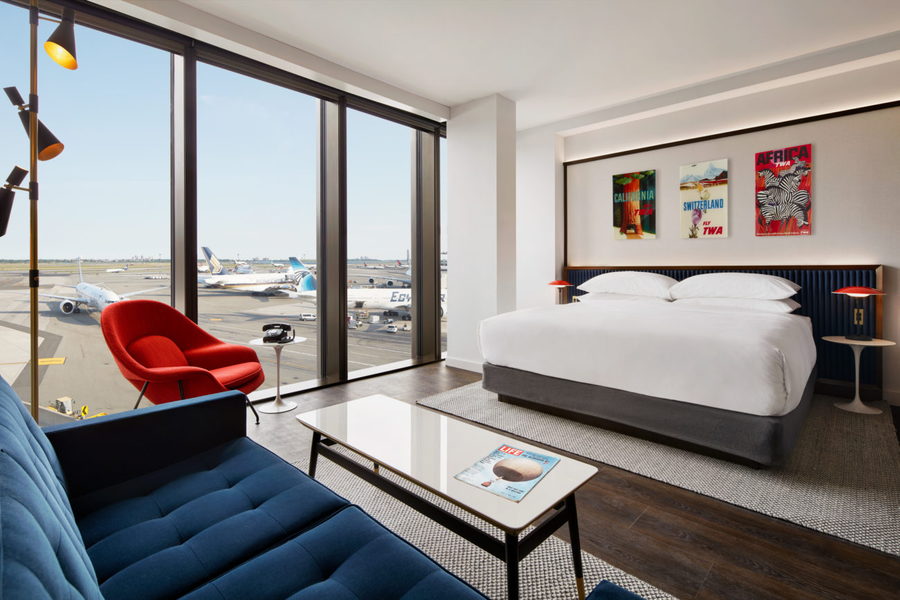 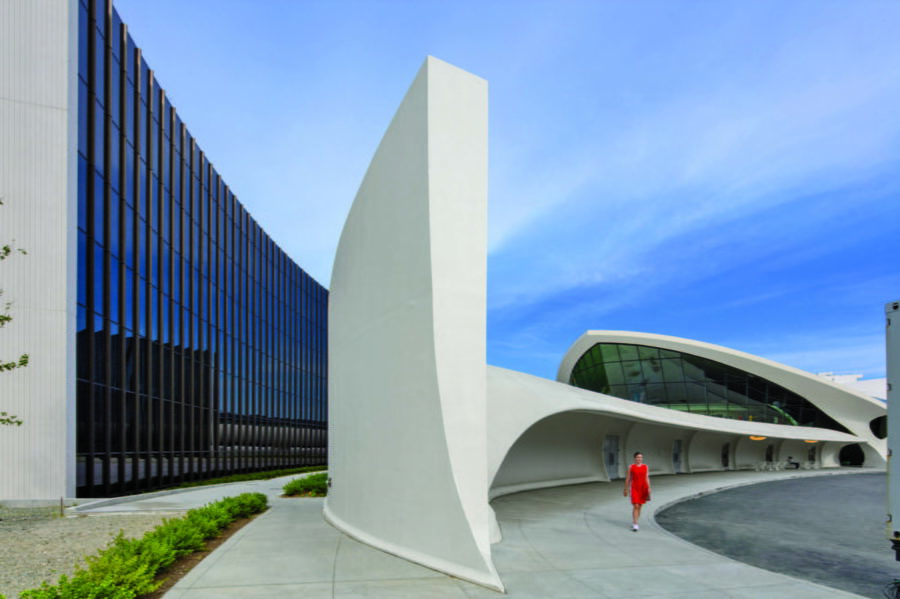 The firm explains that “by offering a modern refuge with a thoughtful, strong sense of design and space, the rooms are meant to make guests feel the same appreciation and excitement for aviation that travelers once felt during the rise of the industry.” 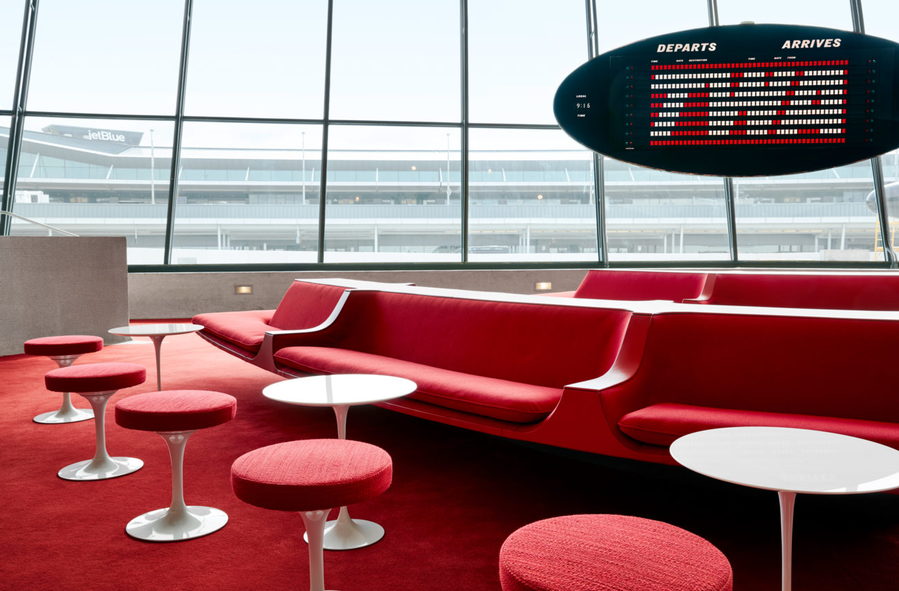 They add that “custom furnishings and lighting, like the wood trim, which follows along the ceiling edge and softly illuminates the room, [reference] midcentury design. In many of the rooms, beds are positioned to let guests enjoy the exciting rhythm of the runway or the glory of Saarinen’s TWA Flight Center.”

The TWA Hotel officially opened in May 2019, and rates are quite reasonable, currently running between $160 and $200 per night.