With a series of bland 1970s high-rise buildings as its backdrop, the new addition to the Shiroiya Hotel in Maebashi, Japan could easily have been unremarkable, adding to the block’s overall “concrete jungle” vibe. But as soon as architect Sou Fujimoto became involved with the project, the word “boring” flew out the window. Well known for his unconventional approach to urban architecture, Fujimoto has breathed new life into the development with a faux tree-covered hillside topping the original hotel building. 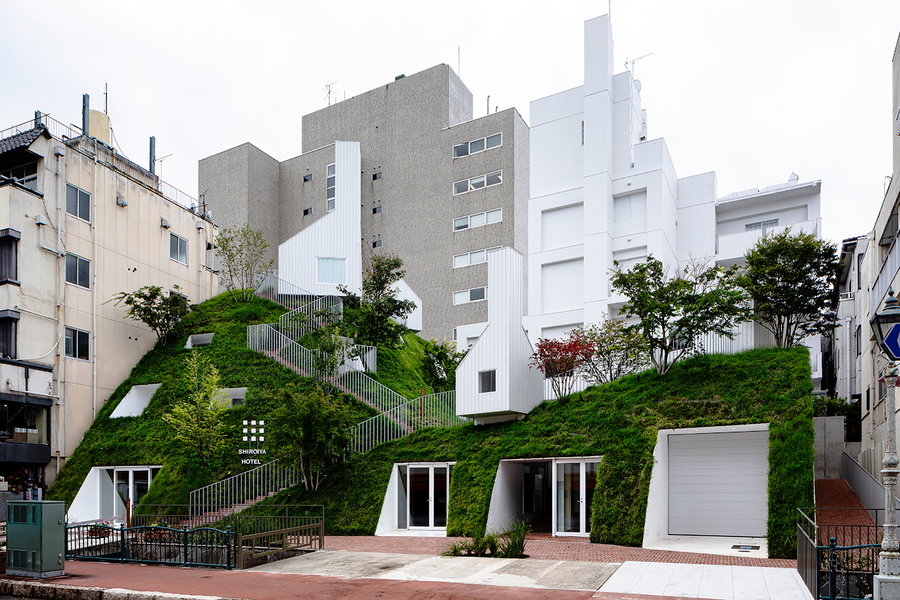 The town, which once thrived in the silk industry, is currently in the midst of a revitalization, with Shiroiya Hotel in particular being seen as “a living room” for locals and travelers to relax, dine, and enjoy art. In recent decades, however, the hotel fell into decline and closed. Japanese business mogul Hitoshi Tanaka, CEO of eyewear company JINS, enlisted Fujimoto to make it the jewel of his hometown once again, overseeing a renovation that also includes guest rooms designed by an international team of creatives including Michele de Lucchi, Jasper Morrison, and Leandro Erlich. 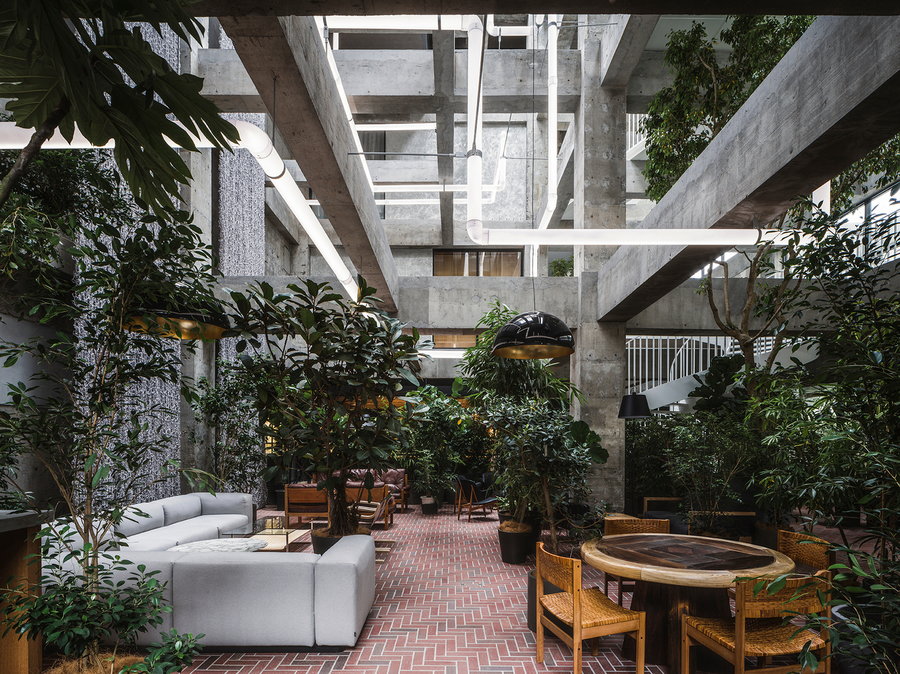 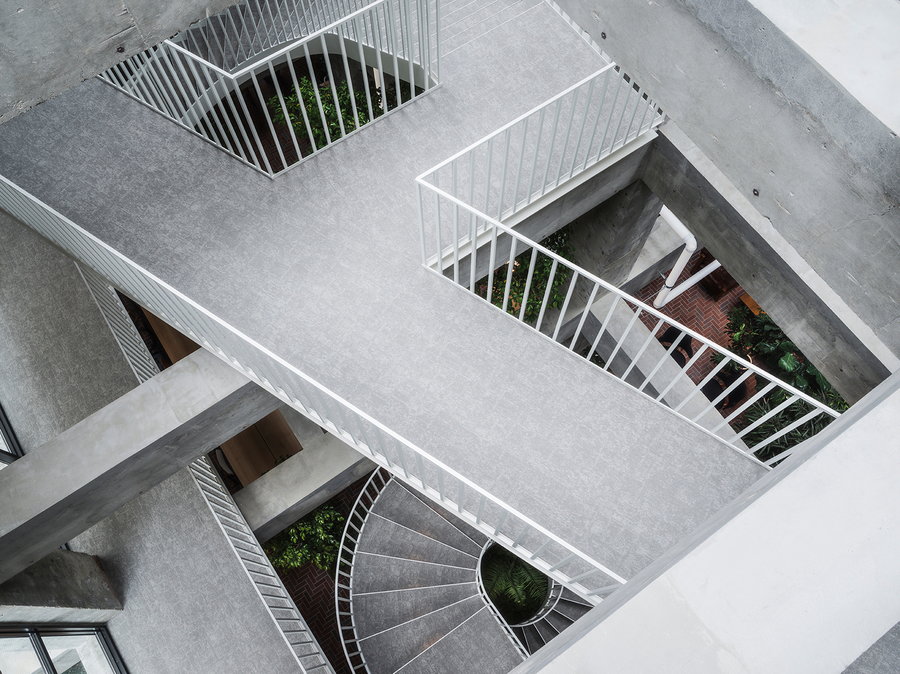 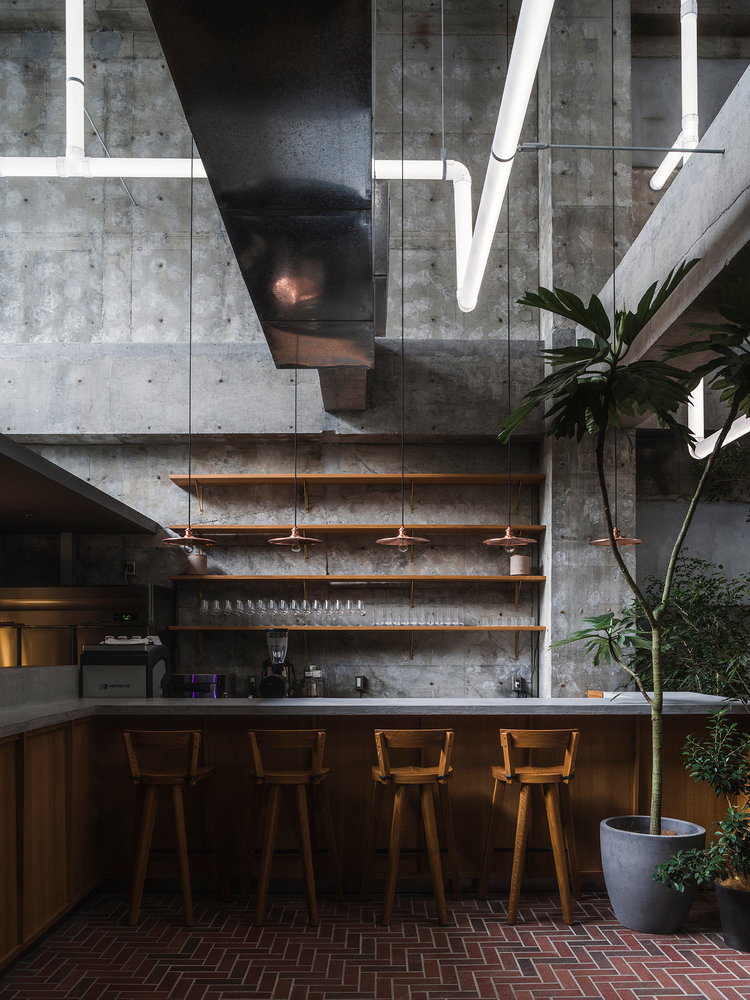 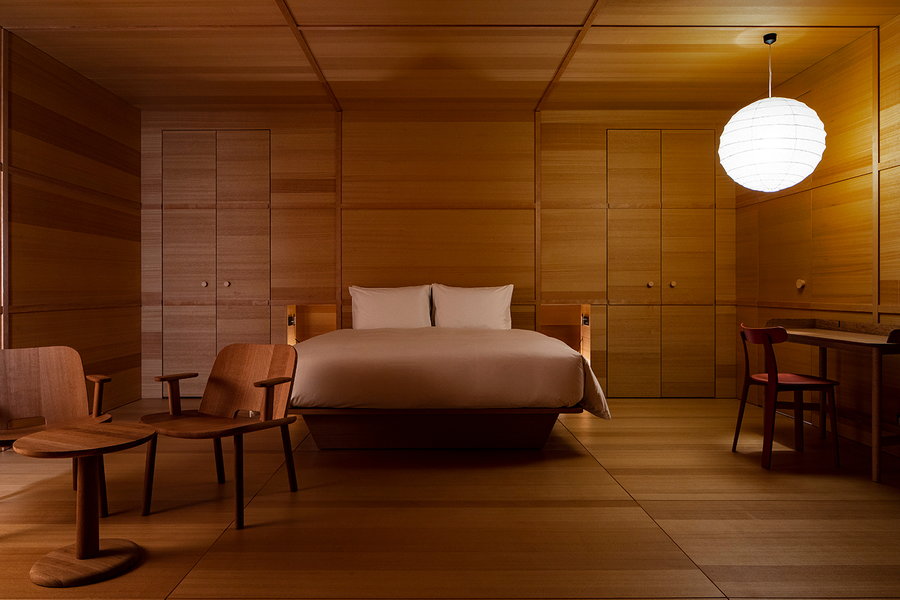 In an interview with Designboom, Fujimoto explained that he didn’t feel particularly inspired when he saw the existing building, and that the four-story hotel made of reinforced concrete “wouldn’t be a very special place” if the team just completed an interior renovation. Naturally, they had to take it further than that. Then, by a stroke of luck, the lot next door became available, and they had the opportunity to transform the heritage structure while also building something new.

“From my personal background, I have always been interested in integrating the natural environment with an architectural environment, because I don’t like to divide nature and architecture,” Fujimoto says. “Nature has a nice diversity, and it’s more of an open place where people can choose where to sit, or what to do.” 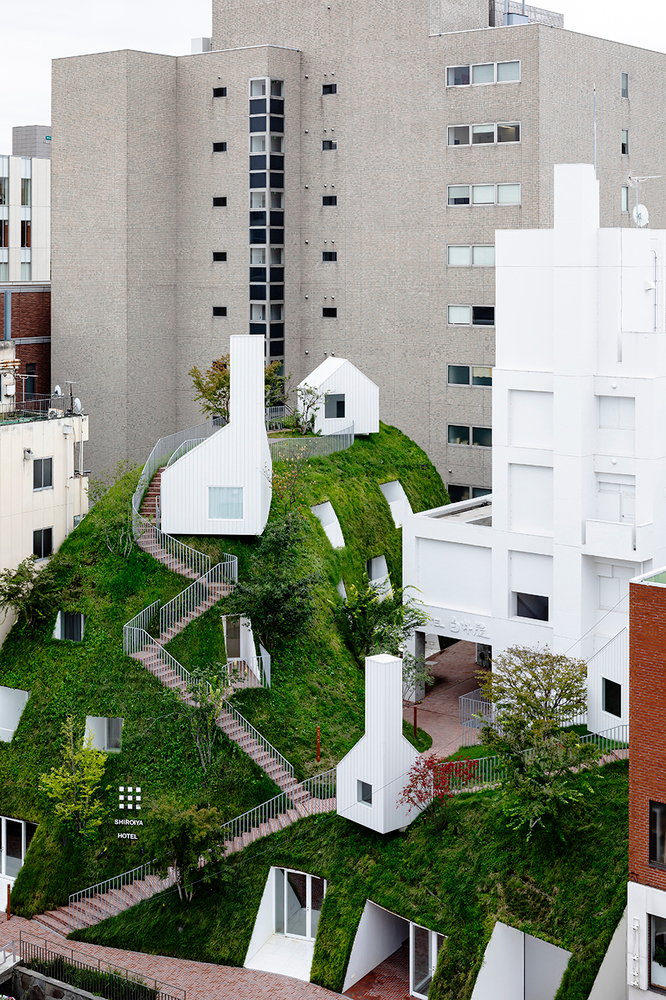 The result is a stunning “Green Tower” that brings the natural scenery of the region into the downtown area. The grassy hillside wraps around the new volume, topped with small house-like volumes and pierced by windows. A staircase zig-zags up its surface to the pinnacle. Suddenly, the environment around it is reinvigorated, seeming to bloom under its new sense of purpose as a center of activity.

The theme continues in the original building, where Fujimoto followed through with his initial idea to eliminate many of the horizontal planes of the hotel, creating vast new atriums open to skylights. These spaces are perfect for incorporating lots of living greenery, which contrasts with the solid, geometric Brutalist shapes of the concrete. Stretching through the new voids are Leandro Erlich’s “Lighting Pipes,” functional sculptures that double as lamps. 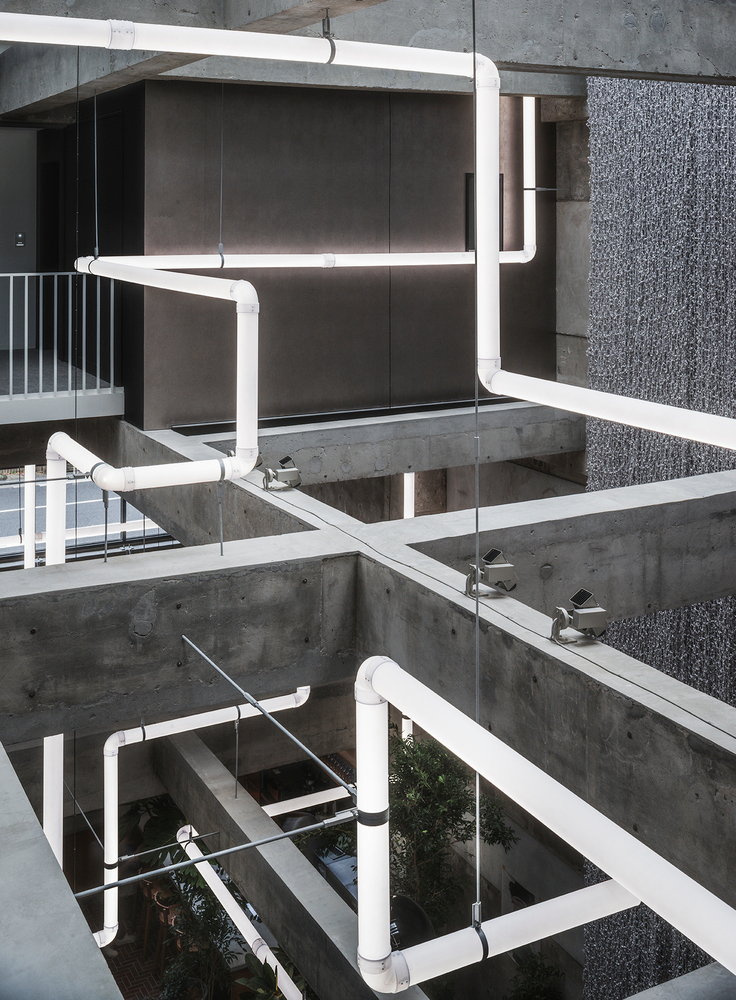 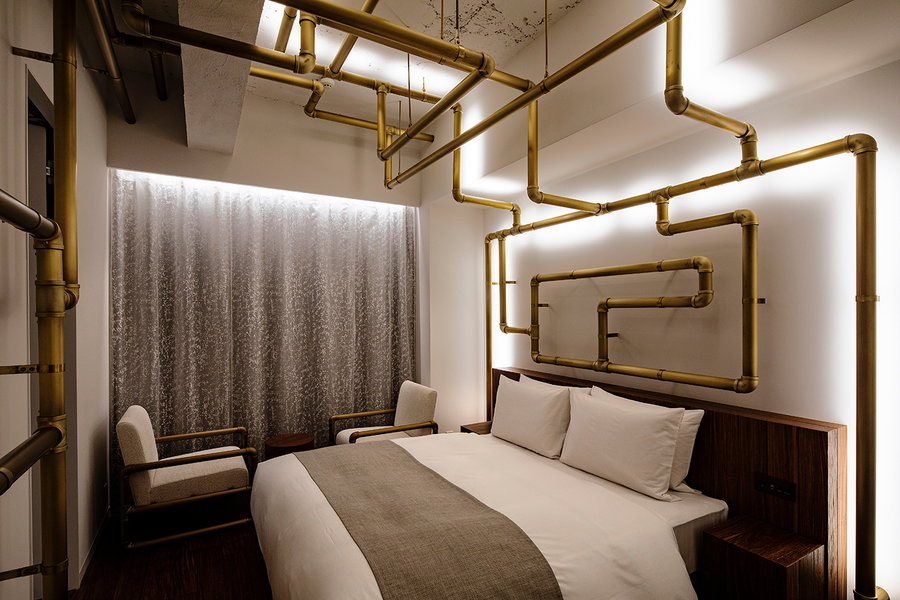 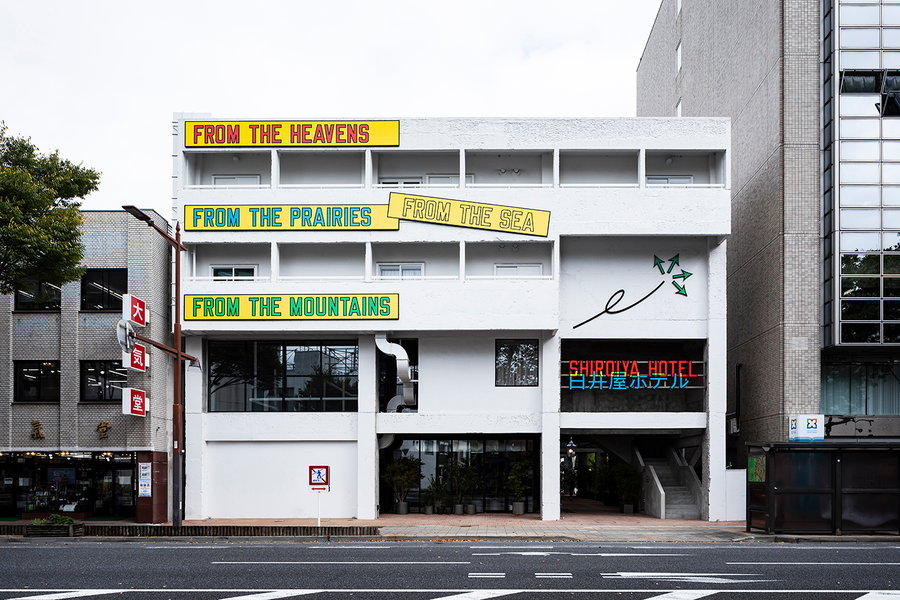 Last year, Fujimoto completed L’Arbre Blanc Tower in Montpelier, France, a mixed-use multifamily project featuring cantilevered balconies supporting plants, which turned out to be a fascinating example of how odd-looking renderings translate to real life buildings. Some of his other notable works include residential projects that make interesting use of tight urban lots, like the surreal “stacked houses” apartment building in Tokyo and the bright white “House N,” which consists of three perforated layered shells.