There’s one major reason we don’t see many regular-sized quirky homes: building codes. In many places around the world, it’s tough to get approval to build something with unusual shapes and materials. But with small structures like sheds and guest houses, which are often exempt from the need for permits, you have a lot more leeway for fun and creativity. 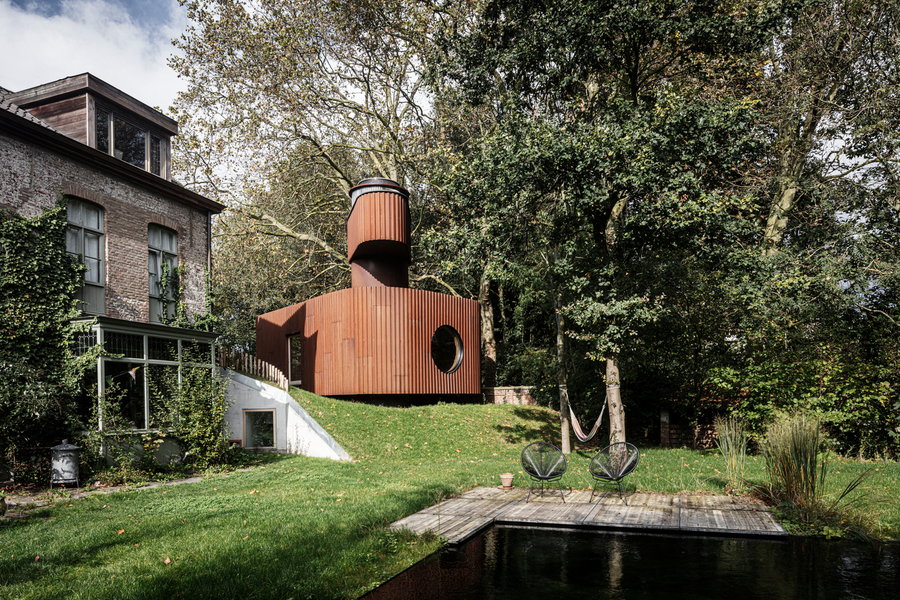 In Ghent, Belgium, a new guest house by Atelier Vens Vanbelle makes a sculptural statement beside a more traditional residence. Its exterior contrasts with the main brick volume in just about every way but somehow complements it at the same time, and its interiors are just as delightful.

The client, who works in the film business, wanted to host international guests in style without sacrificing privacy within his own home. What the studio served up fills that criteria and then some, offering up guest quarters, a screening room, and a lookout tower in a compact package that takes up very little space in the yard. 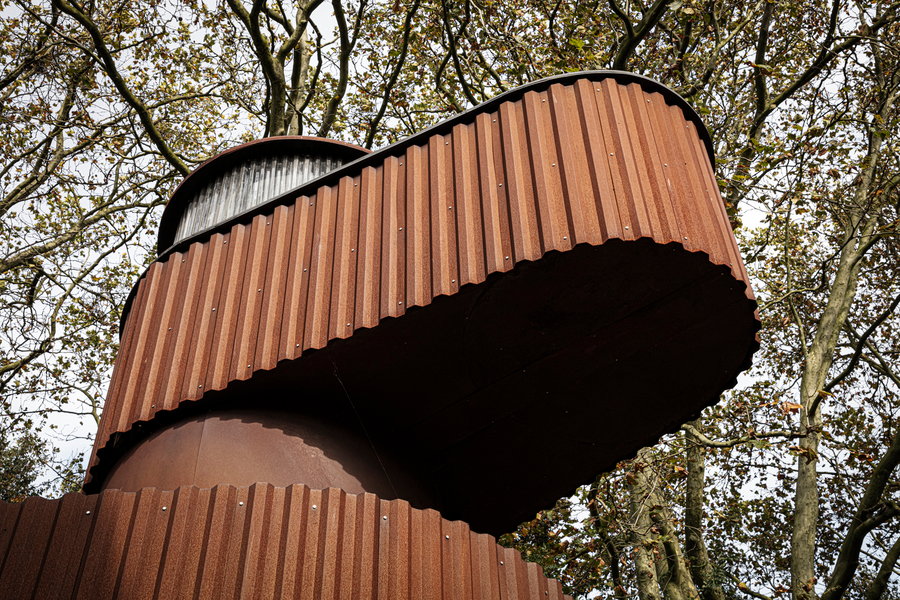 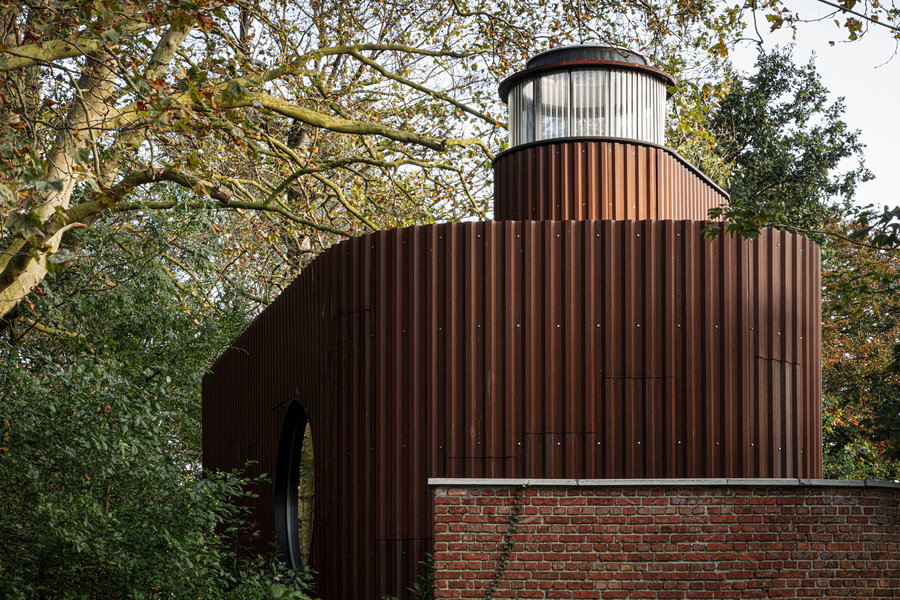 “The location is very idyllic, with the Schelde (river) flowing behind the romantic garden on the one hand and a castle view on the other,” the architects say. “The French-style house had a garden wall behind which an old dilapidated garage and shed stood in a wild garden. A lost and forgotten corner, but still this place had everything to be the ideal location for the guest house: cool setting, privacy, space, and view.”

“This project remains close to the reality of the owner, and as a guest, you literally descend into an alienating underground world before the ultimate log cabin is shown. Guests enter the new garden shed and bicycle shed through the living room of the client, after which they descend a staircase and end up in a long underground corridor. The disorientation is complete. A first surprise awaits them when they arrive in a small cinema hall with red curtains. David Lynch is not far away. Opposite there is a small, nice bar with an equally strange character.” 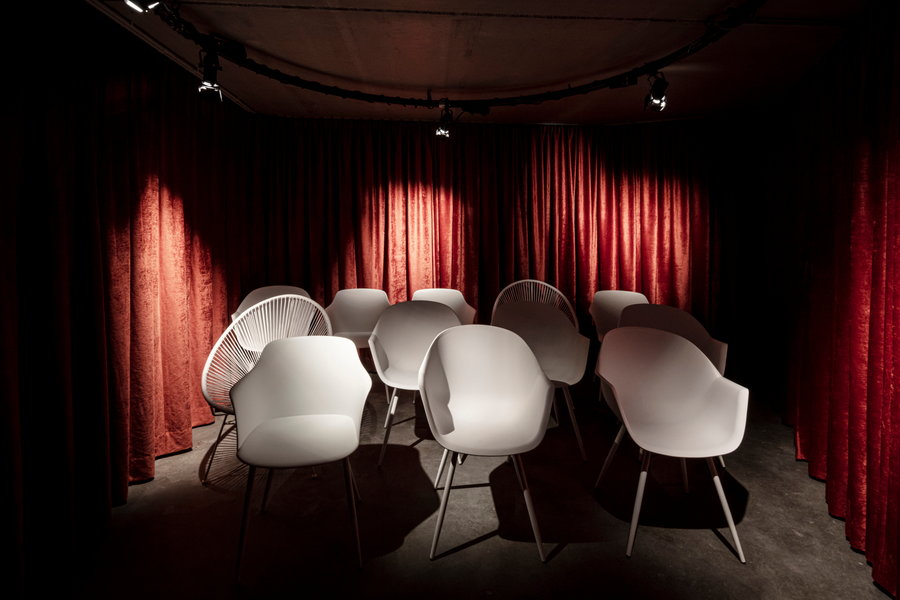 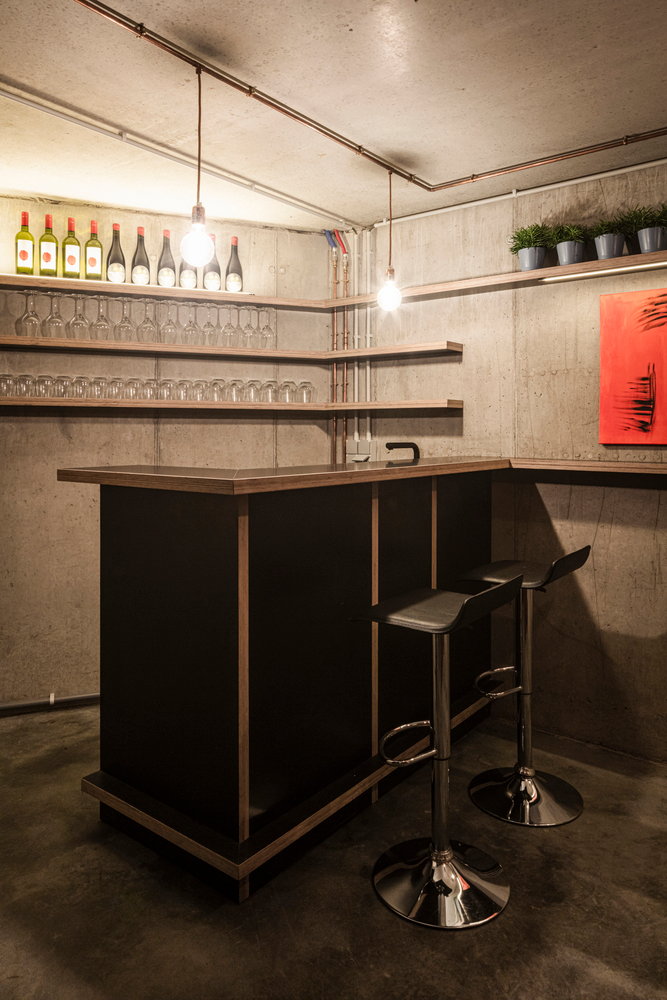 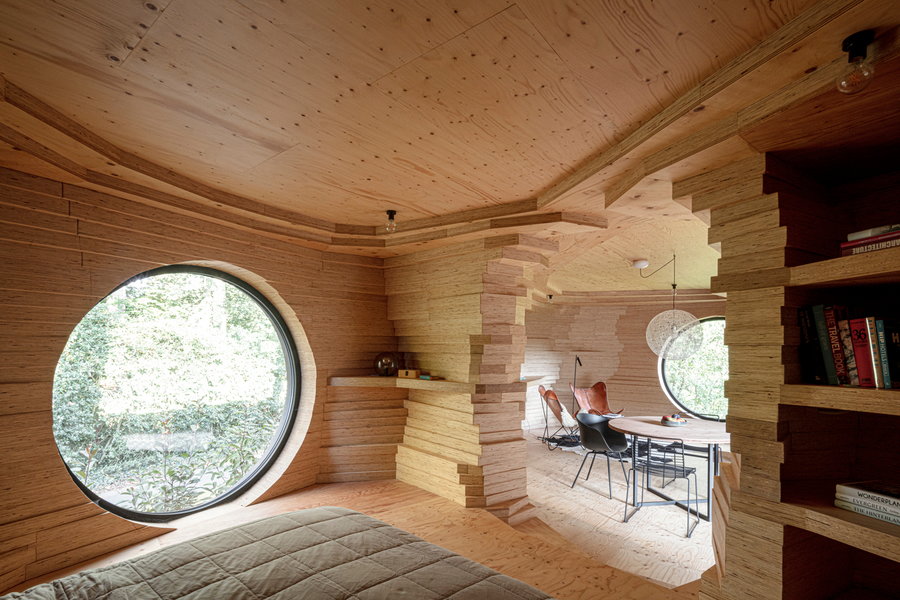 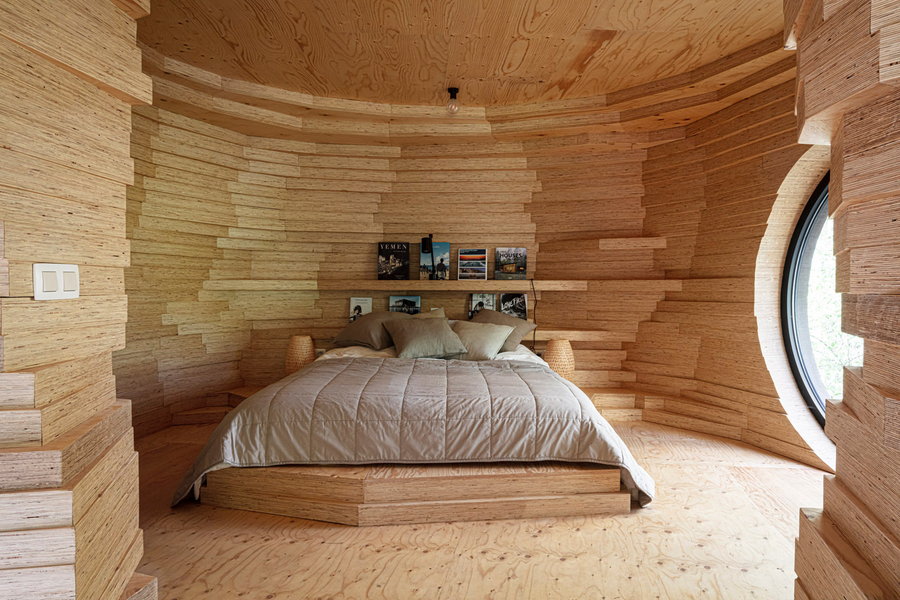 The spiral staircase then leads to a completely wood-lined guest space inspired by the cozy enveloping atmosphere of a cave. Instead of framing standard interior walls, the architects stacked laminated wood throughout the interiors for a chunky, sculptural effect. In fact, the whole guest house was built this way in the architects’ studio using four-centimeter thick slabs of wood, “layer by layer,” before it was transported to the site. 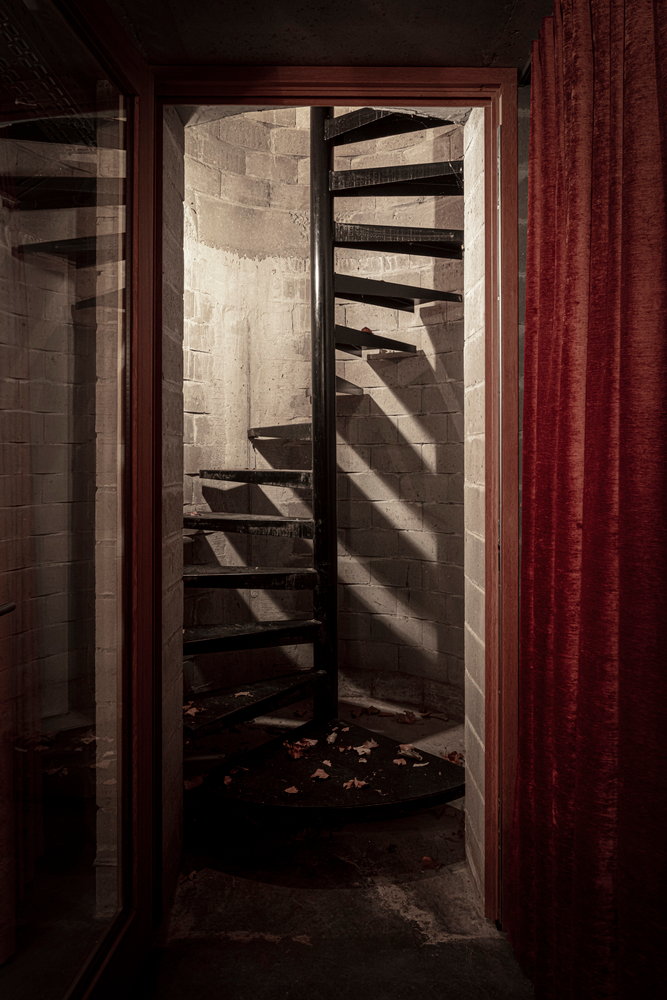 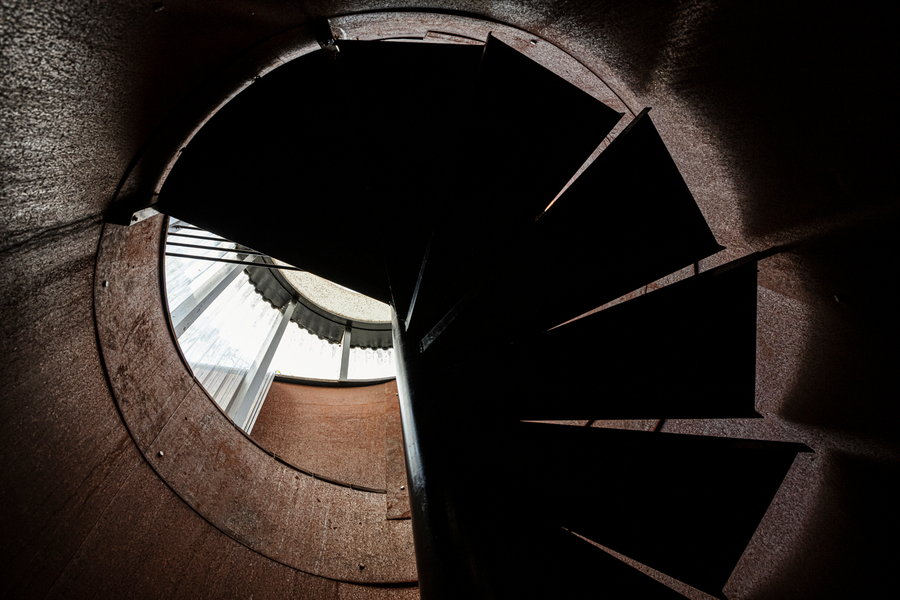 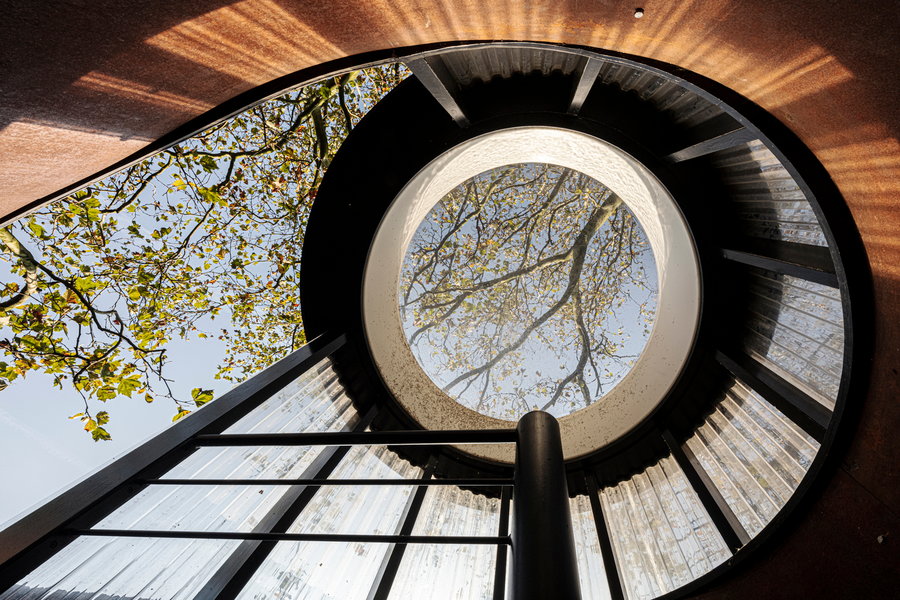 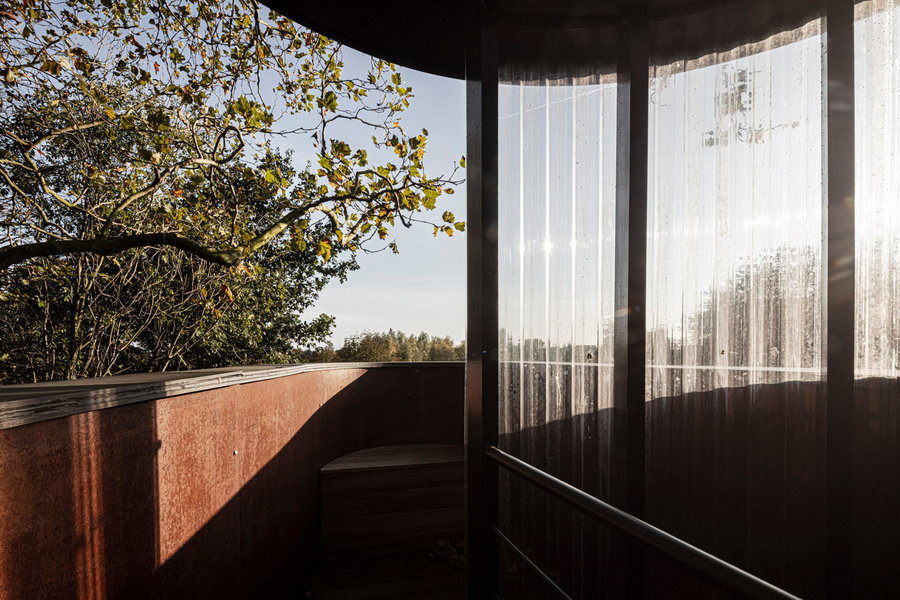 Two large round windows offer views of the landscape and of the home. If you continue ascending the staircase from there, you’ll find yourself at the top of a “lookout point” that’s actually an outdoor shower. The Corten steel facade of the guest house offers protection from the elements, and gives it an earthy feeling among the surrounding trees. 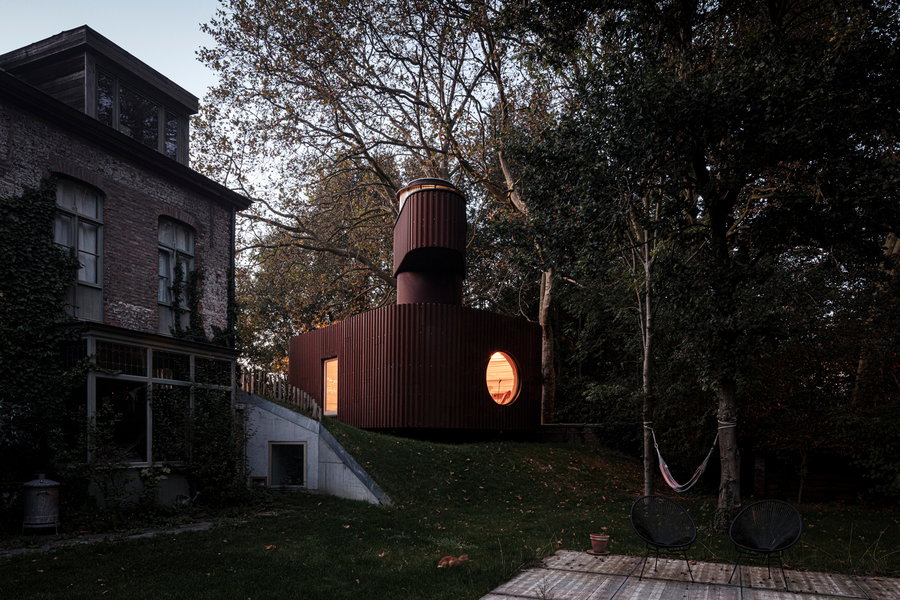 The architects add that “this project was designed as a kind of cinematic experience in which you are catapulted from one atmosphere into another, and which responds strongly to your feelings. One elongated surprise with a guest house that stays as far away from a typical hotel room as possible. Here, you are briefly away from the world.”