Rising into the air well beyond the tallest reaches of the surrounding forest’s trees, an impressive observation tower lets visitors make their way into the clouds for some unprecedented views of Gisselfeld Klosters, a privately-owned preservation that sits about an hour to the south of Copenhagen. The 1,969-foot walkway, which was designed by the Danish architecture studio EFFEKT, is accessible to all, as it incorporates a gently sloping ramp rather than an endless set of breath-stealing stairs. The tower’s multi-tiered nature encourages visitors to enjoy the scenery from every one of its levels. Thanks to the ramp, people can take their time with the ascent, making their quest to reach the top almost as important as the destination itself. 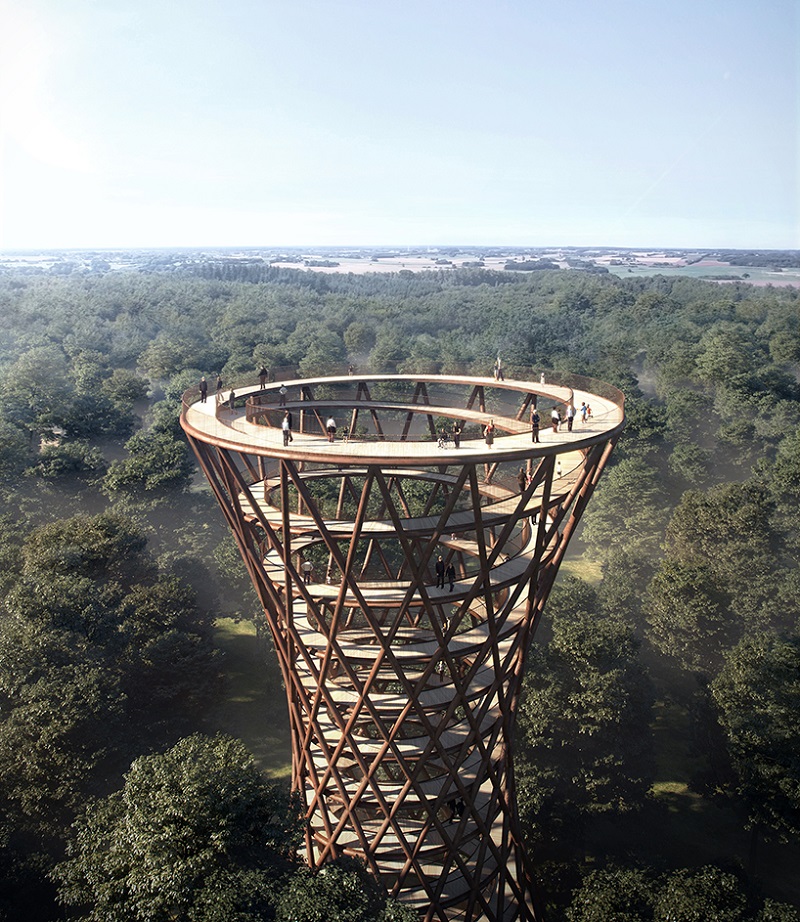 This modern observation tower is soon-to-be part of the forest’s “Camp Adventure,” an amusement park filled with activities like zip lining and advanced indoor rock climbing. Guests will be able to get up-close views of the forest’s lakes, wetlands, creeks, cliffs, and aviaries as they traverse a series of pathways and bridges that ultimately lead to EFFEKT’s “Treetop Experience.” 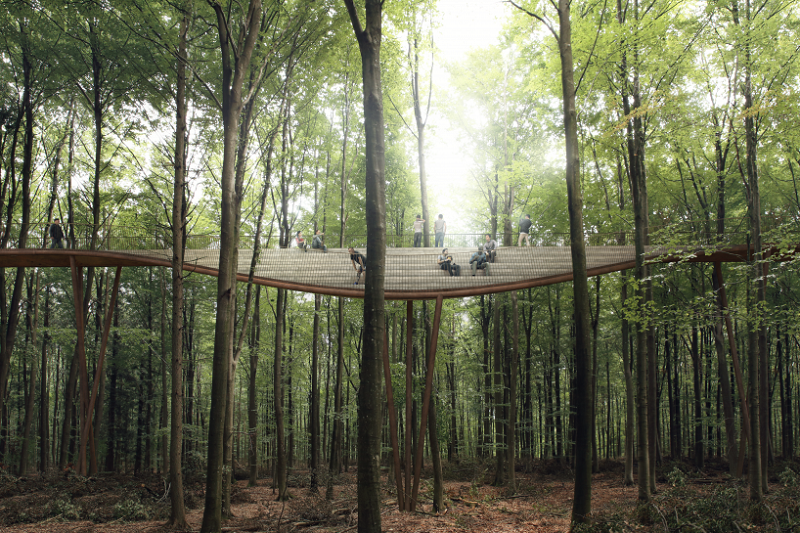 To get to the tower, you’ll have to take one of two ramps. The “high” walkway gives visitors a look at the forest’s oldest and tallest trees, while the “low” walkway passes through some areas that have been lined with newly-planted saplings. You’ll also have to trek over some hilly terrain on your way to the Treetop Experience — a rarity in these parts of Denmark. There’s even a small amphitheater along the way where you can stop and have an afternoon picnic! 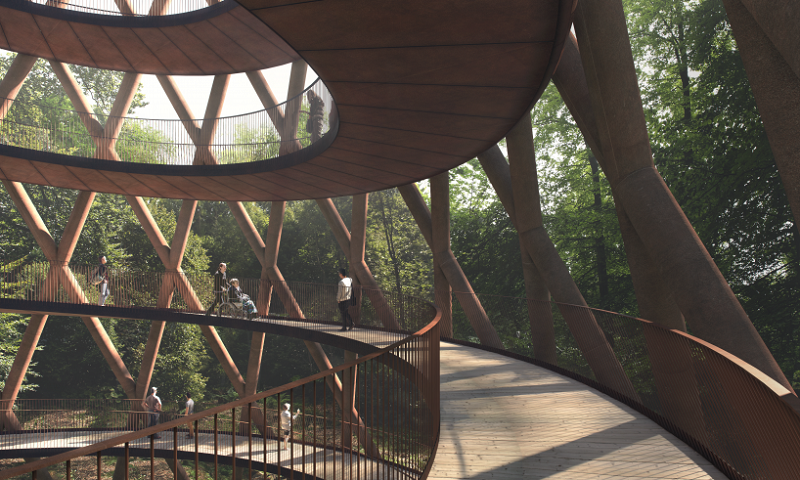 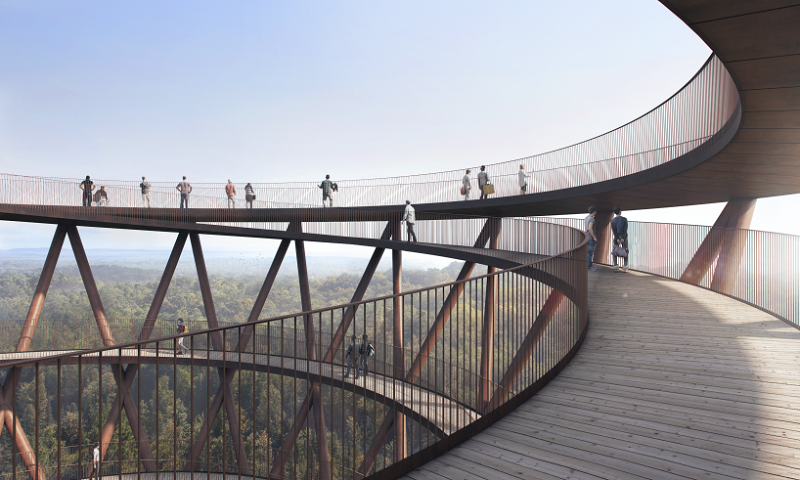 While designing the tower, EFFEKT asked themselves, “how can we protect a preserved forest and make it accessible at the same time?” Their answer was the Treetop Experience. “The tower is set gently and respectfully in the forest, disturbing the existing surroundings as little as possible, while creating a new unique opportunity to take a walk above the tree tops and experience the stunning nature from a new perspective,” explain the architects. “A 600 meters long tree top walkway around the forest, will be connected to the tower as a continuous experience. Both tower and walkway function as a seamless continuous ramp that will make the forest accessible for all, despite physical condition.” 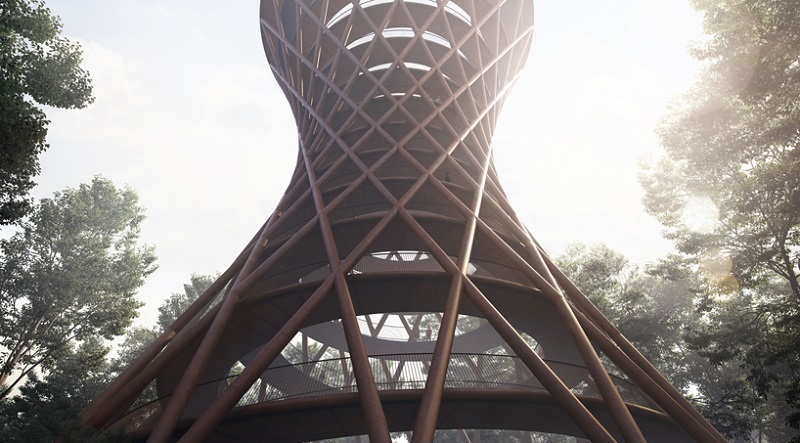 The tower’s profile is almost as beautiful as the landscapes around it, which is a good thing considering its high visibility from places all around the park. Narrowing at its center and flaring out at both ends, the tower features a lattice-like open framework that supports its wooden walkways and curls upwards towards the sky. The resulting aesthetic makes the entire structure feel like a tautly-pressed spring that’s ready to launch itself, and anyone on it, into space. Once you reach the top, you’ll be able to look down at what seems like a vortex of guests making their way up the ramps. 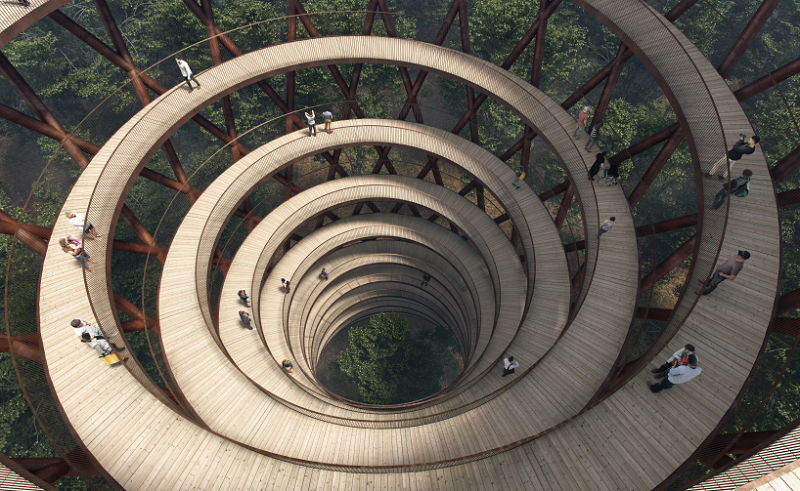 The Treetop Experience is just a concept for now, but it’s well on its way to becoming a physical structure. As of yet, no official opening date has been announced. In January, EFFEKT revealed that they had been granted building permission and that they would release further details on the project as soon as they could. The firm’s website features several images of the tower and maps of its proposed walkway routes.