Modernist architecture has a grandness of scale and simplicity of form that makes it feel hopeful, expansive, and full of possibility. Vietnamese architecture firm Whale Design Lab wanted to translate these feelings to an unusual setting: the interior of a typical apartment in a high-density urban neighborhood in Ho Chi Minh City. 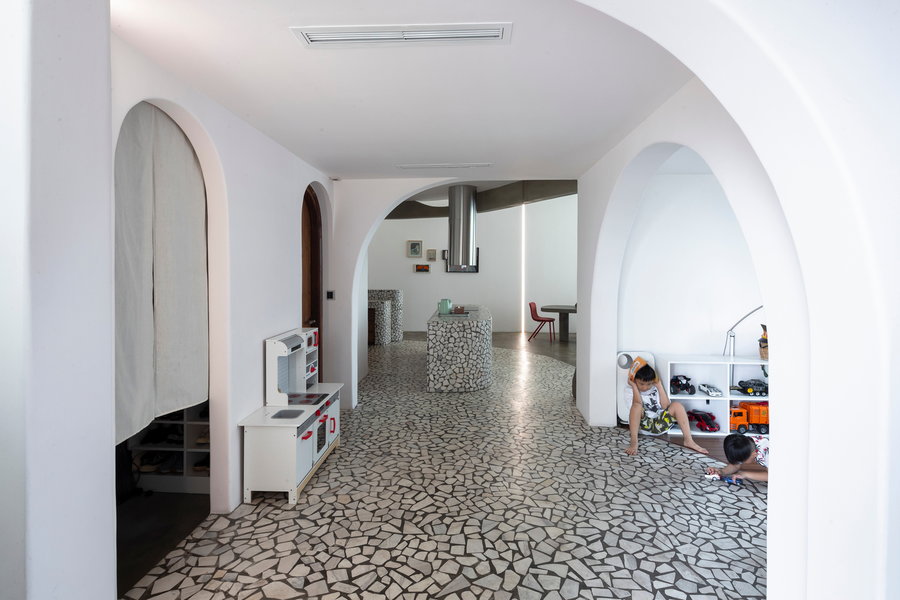 Mái Apartment embraces and reimagines the aftermath of Vietnam’s fraught colonial history. The country was controlled by France for more than six decades as part of the so-called “French Indochina,” during which time the French believed it was their responsibility to introduce modern Western political, social, industrial, and technological ideas to Asian and African nations in order to “civilize” them.

Northern Vietnam declared independence from France in 1945, but Western influences continued to have a big impact in the ensuing decades. Imported from the United States, Modernist architecture flourished as part of an effort to overthrow the French neoclassicism, introducing a new aesthetic of concrete and terrazzo to the otherwise-tropical environment. Great examples of this style in Vietnam include the General Science Library by Nguyen Huh Then and Bui Quang Hang and Independence Palace by Ngô Viết Thụ. 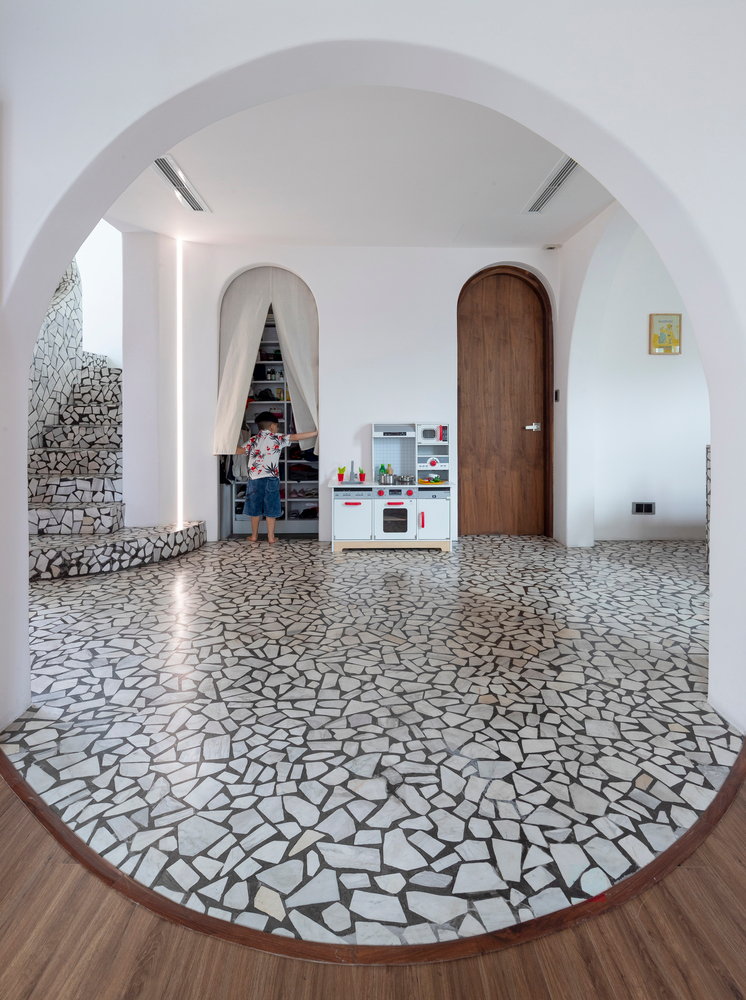 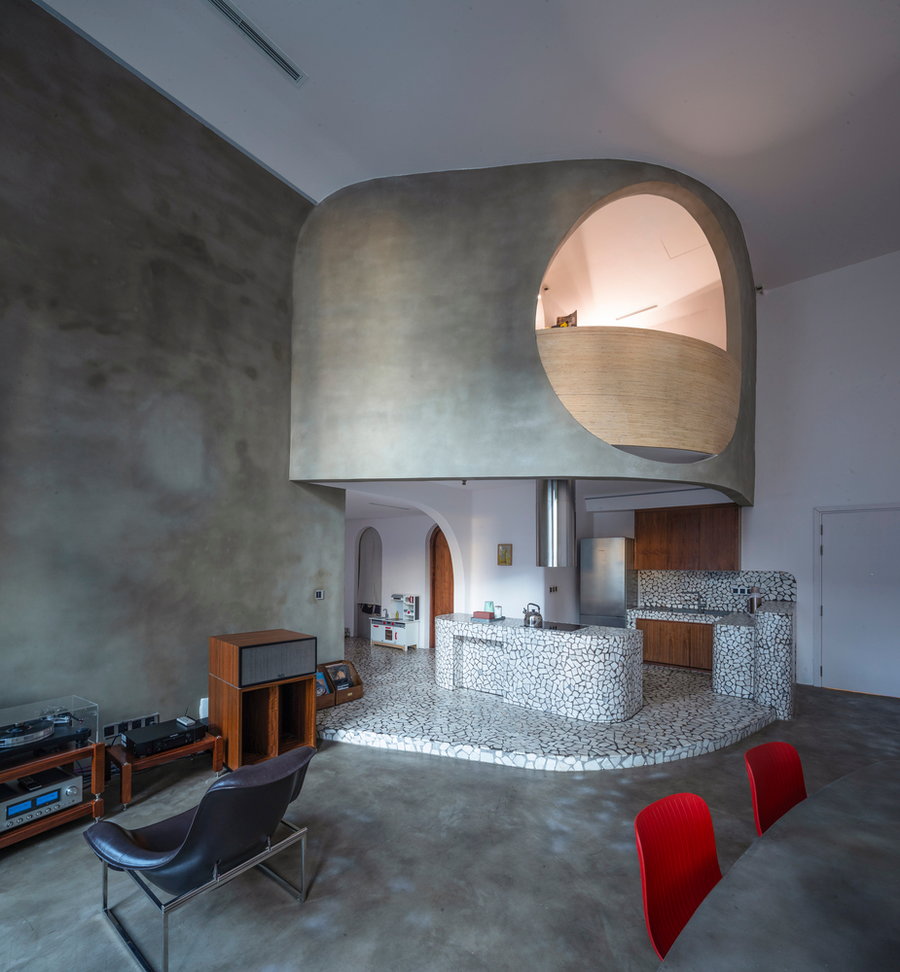 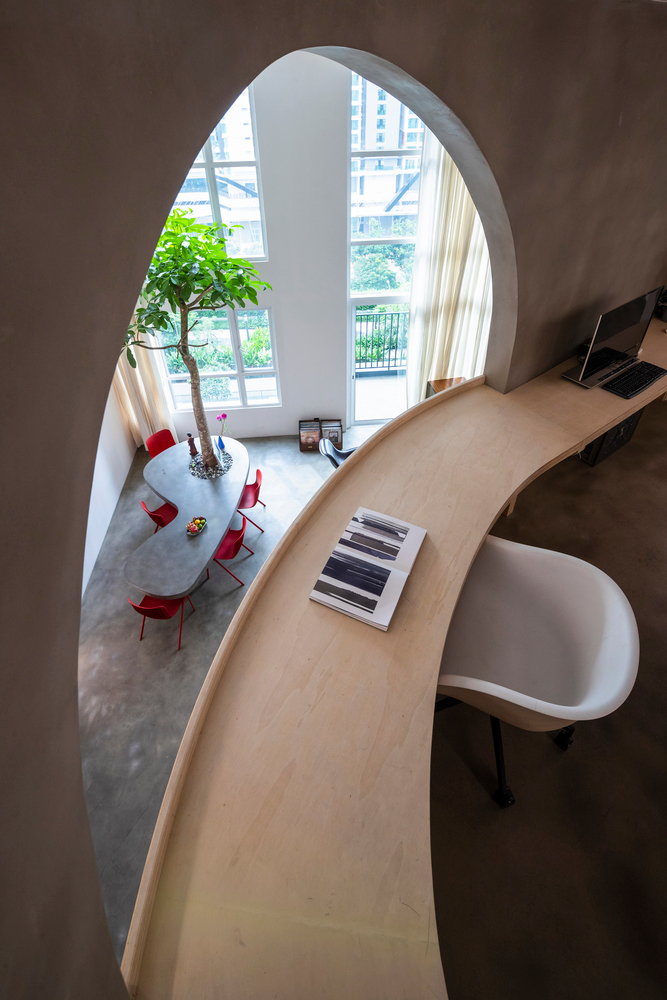 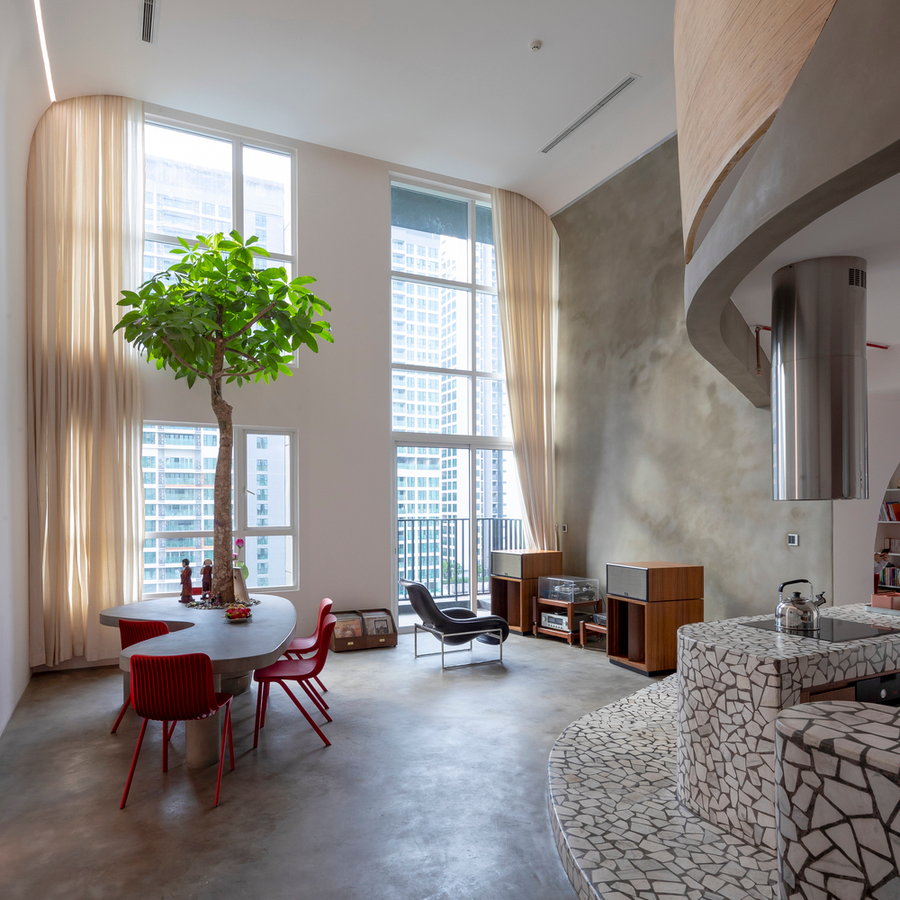 Take a walk through Ho Chi Minh City and you’ll see evidence of these influences on virtually every street. The style is easy to spot when it comes to exteriors, but less common indoors, especially within residences. Whale Design Lab, led by architect Hanh Le, has brought to life a striking arrangement of minimalist surfaces and monumental forms without making any significant structural changes to the existing apartment.

One significant influence is Louis Kahn, one of America’s greatest 20th-century architects. A master of Brutalism, Kahn created such visionary structures as the Salk Institute in La Jolla, California (1959-65), Phillips Exeter Academy in Exeter, New Hampshire (1965-72), and the striking National Assembly Building in Dhaka, Bangladesh (1962-63). His work is typified by dynamic geometric shapes, and though most of his structures were made of cold and hefty cement, they never felt static or boring. 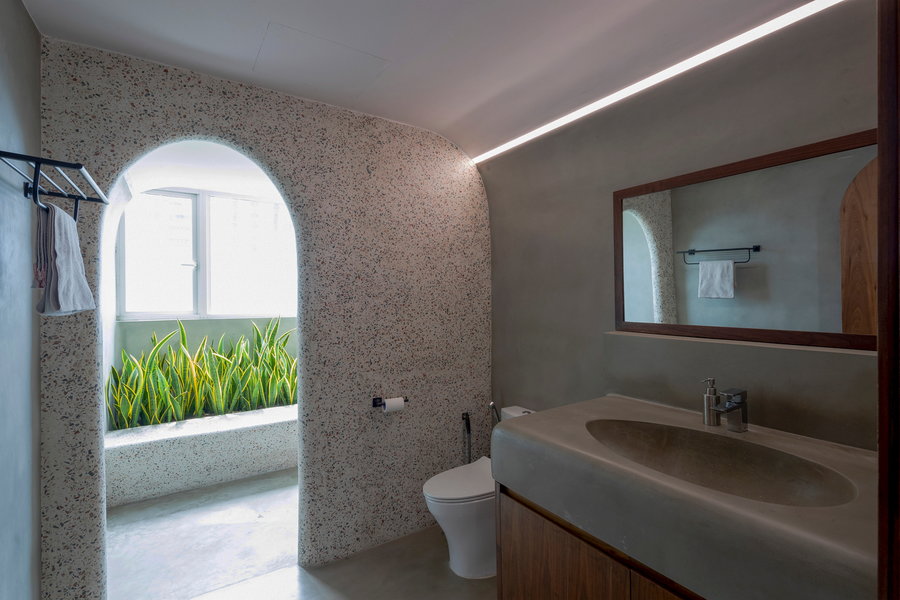 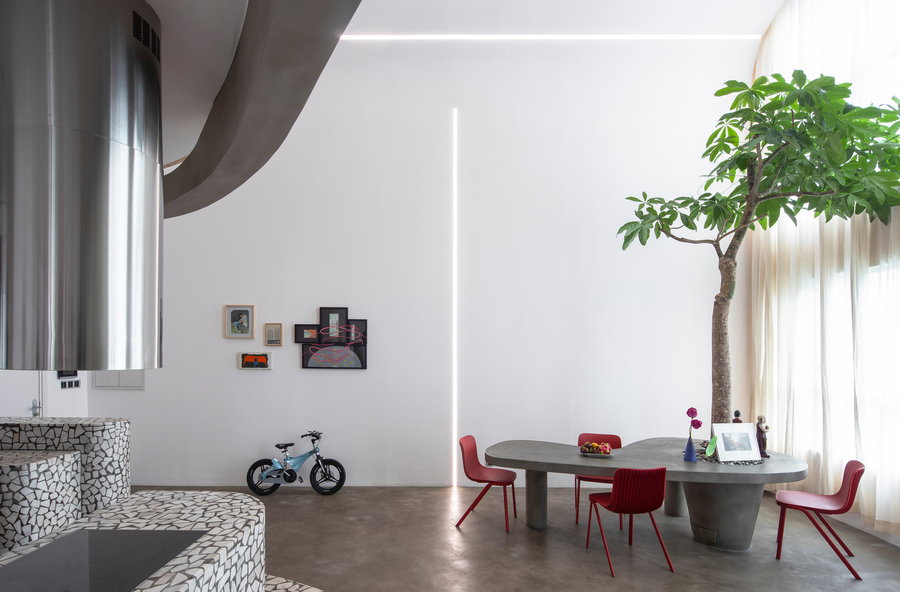 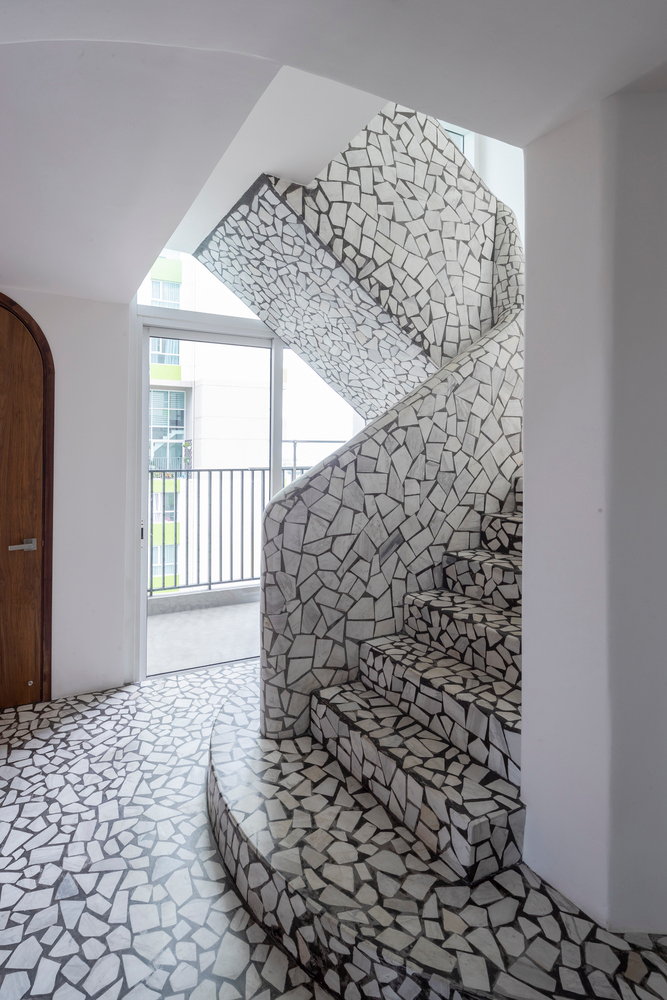 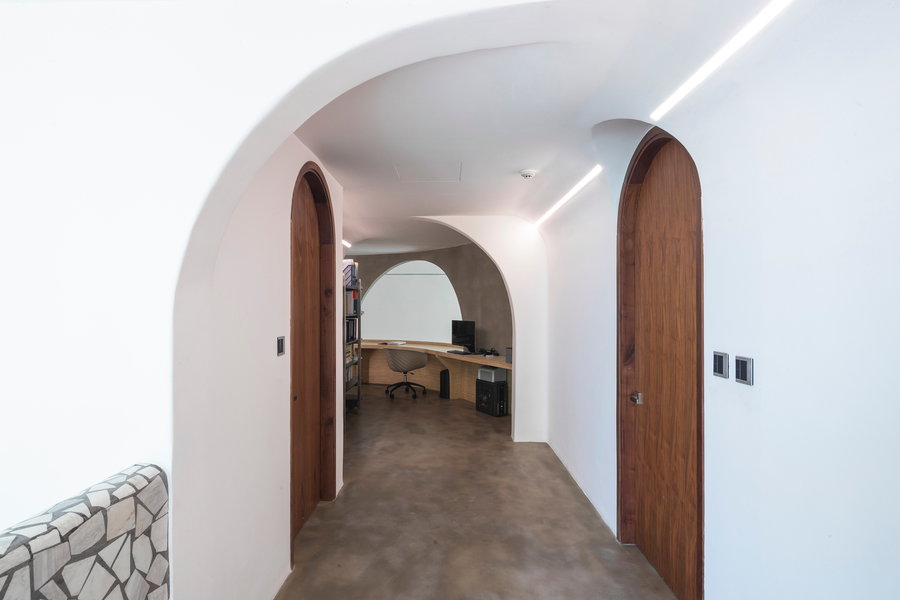 Hanh Le saw in Kahn’s work a revolutionary functionality and pared-down elegance, eventually leading him to wonder how could these aesthetics be recreated “in a boring four-bedroom condo apartment.”

The giant circular cutouts seen in the Phillips Exeter Academy appear here in a new way, sliced out of interior concrete walls that allow light to pass between the spacious, open two-level living area and a quiet study with a curving built-in desk upstairs. They’re echoed by the rounded archways subtly separating and defining various interior spaces, including the lip of a gorgeous terrazzo floor, which uses large chunks of white marble inlay instead of aggregate for an updated look. 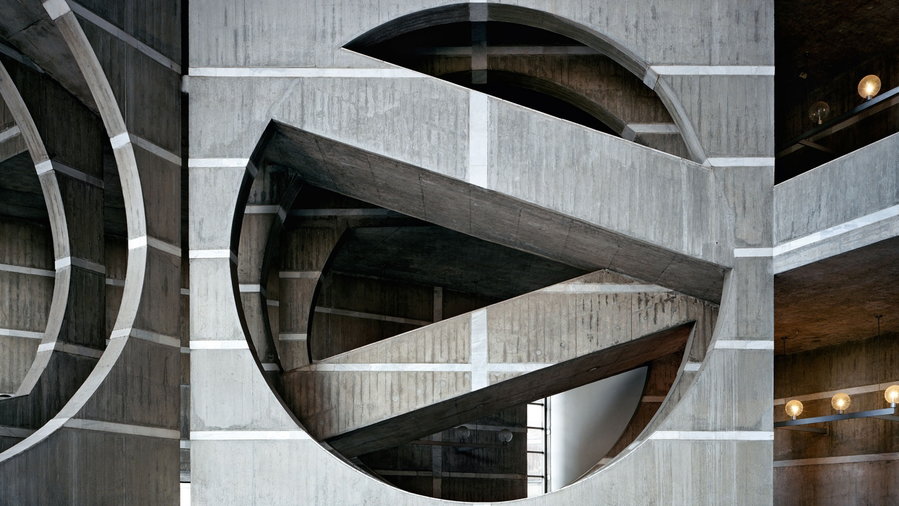 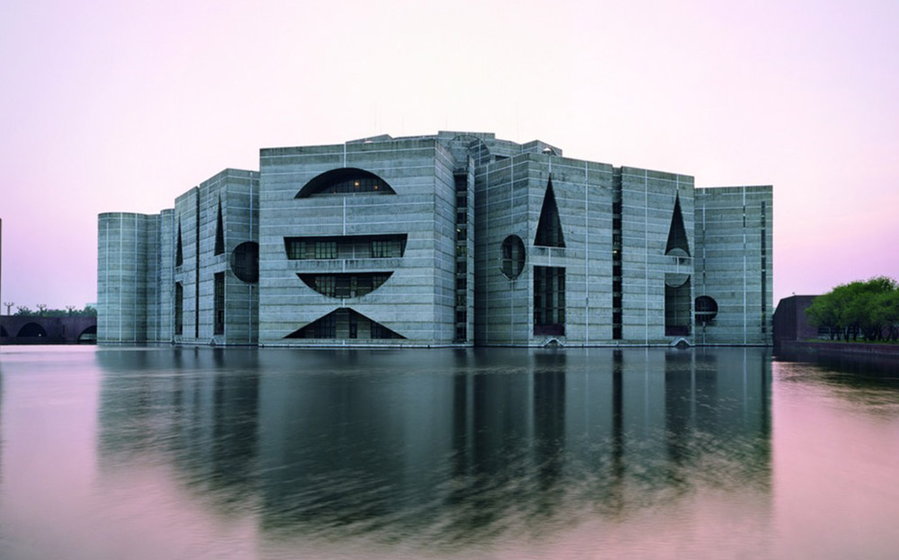 This terrazzo continues both up the stairs to the second level and into the kitchen, where it forms the counters, central island, and even a backsplash. Custom furniture, like a rounded dining table with a built-in planter for a living tree, perfectly complements the architecture of the space. Tropical greenery and warm wood give it an edge that’s distinctly Vietnamese.

The apartment takes its name, mái, from the Vietnamese word for “polish.” It took three years to complete, but the result meets all of the clients’ needs with a refreshing sense of uniqueness that can’t be found anywhere else.