In the aftermath of Hurricane Ian this September, Florida fire marshals dashed around extinguishing six blazes in electric vehicles that had been inundated with seawater. The fires burned for prolonged periods up to six hours. In one case, North Collier Fire Rescue fought an EV fire that continuously reignited, even as fire teams used tens of thousands of gallons of water to cool the batteries. No one had ever seen anything like it.

Now, those officials are calling for electric car companies to explain what happened, and how it can be prevented from happening again. State Fire Marshall Jimmy Patronis issued a letter to over 30 carmakers, including Tesla, Ford, and Rivian, asking them to “step up, demonstrate leadership, and partner with the State of Florida and local officials in this recovery.” 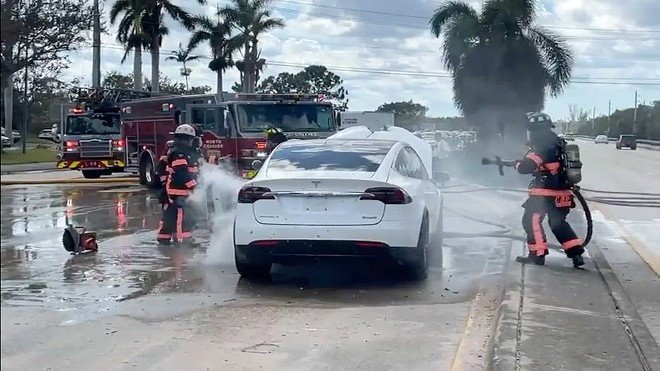 The letter also demanded that EV makers explain whether they knew this was a risk, and to identify whether EVs exposed to saltwater could reignite weeks or months after they were flooded.

“Has your company conducted any analysis on the effects of saltwater intrusion on the lithium-ion batteries in your vehicles and their risks associated with fires? Are there any fire risks associated with chargers that were submerged in the storm surge? Do you have the ability to assess whether an EV impacted by a storm surge is operational and currently being used?,” the letter reads.

The National Highway Transportation Safety Administration confirmed that “test results specific to saltwater submersion show that salt bridges can form within the battery pack and provide a path for short circuit and self-heating. This can lead to fire ignition. Lithium-ion vehicle battery fires have been observed both rapidly igniting and igniting several weeks after battery damage occurred.”

This happens because saltwater is extremely conductive, and when it collides with a lithium-ion battery full of energy, the results can be dramatic. Fires have the potential to be even more dangerous if they involve RVs, golf carts, or scooters inside saltwater-flooded homes, creating larger blazes.

Floridians affected by the storm were urged not to turn on their EVs, plug them in, or unplug them, instead seeking professional assistance to move their vehicles. It’s still unknown what exactly sparks a blaze in the first place, but experts believe it could be as simple as turning the wheel. 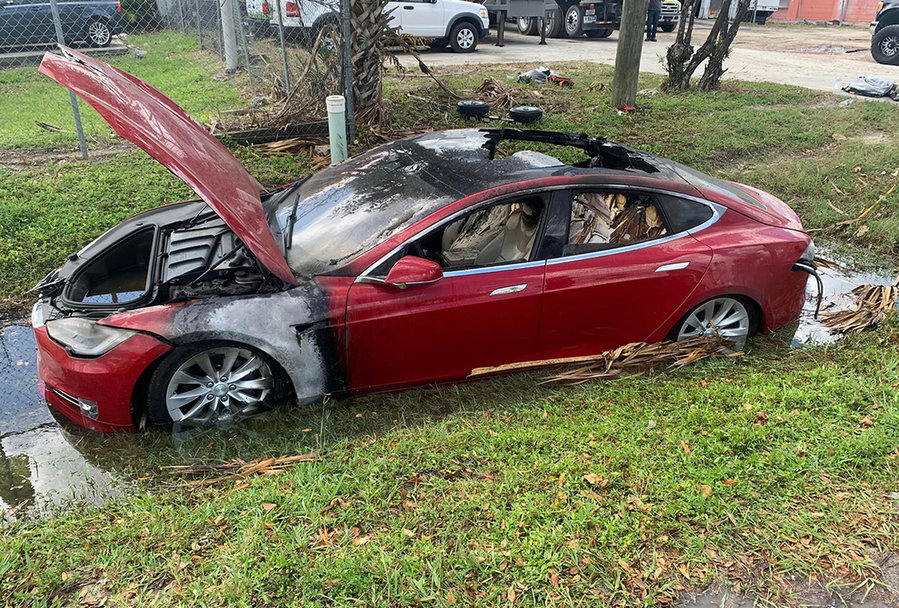 The fires put a political target on the backs of electric vehicles during a time when the Biden administration is attempting to address climate change by replacing millions of gas-powered cars with zero-emitting EVs. Industry groups worry that the fires could lead to an impression that electric vehicles are less safe overall, pointing out a recent report that found roughly 25 fires for every 100,000 EVs sold, and 1,530 gas car fires for every 100,000 internal combustion vehicles sold.

“One Tesla fire gets more news than 10,000 gasoline car fires, whether it’s because people are super interested in Tesla or because people are still fighting the battle to suggest that electric cars are not ready for prime time or not good,” says Marc Geller, spokesperson for the Electric Vehicle Association.