The cold, clinical, and sometimes ominous atmosphere of Stanley Kubrick’s classic sci-fi film 2001: A Space Odyssey isn’t exactly associated with wellness and relaxation. It’s just about the opposite of the nature-infused approach taken by most spas, in fact. But when a client approached architecture firm Atelier Caracas asking for an “out-of-this-world” spa design, they leaned into the concept with surprisingly successful results. 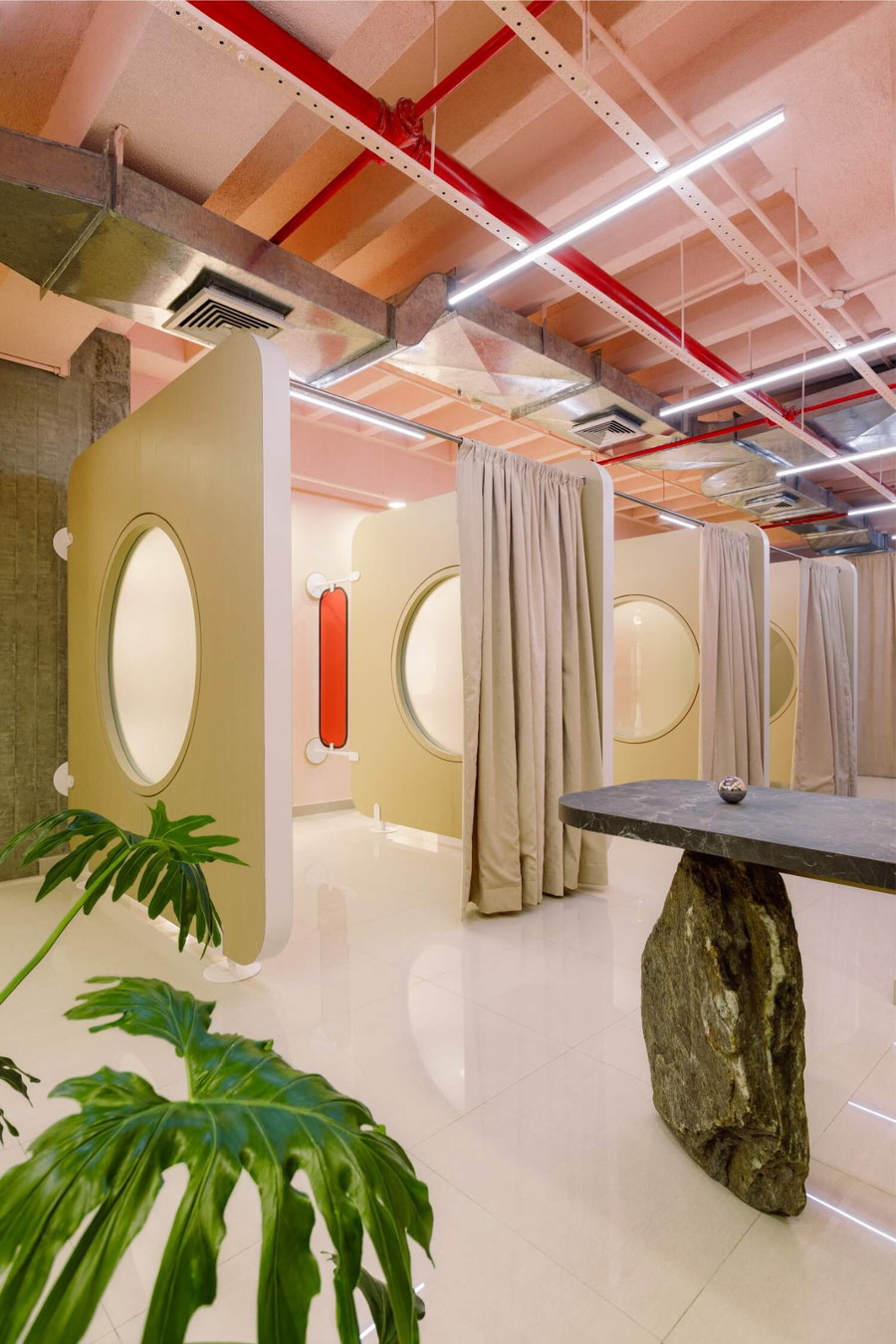 Appropriately named “2020: A Spa Odyssey,” the day spa set on a bustling street in Caracas, Venezuela, feels surreal yet serene. Retro-futuristic science fiction visuals merge with soothing pastels and a few grounding earthly elements for an effect that looks a lot like a set for a contemporary film, or the wellness center of a utopian space colony on Mars. 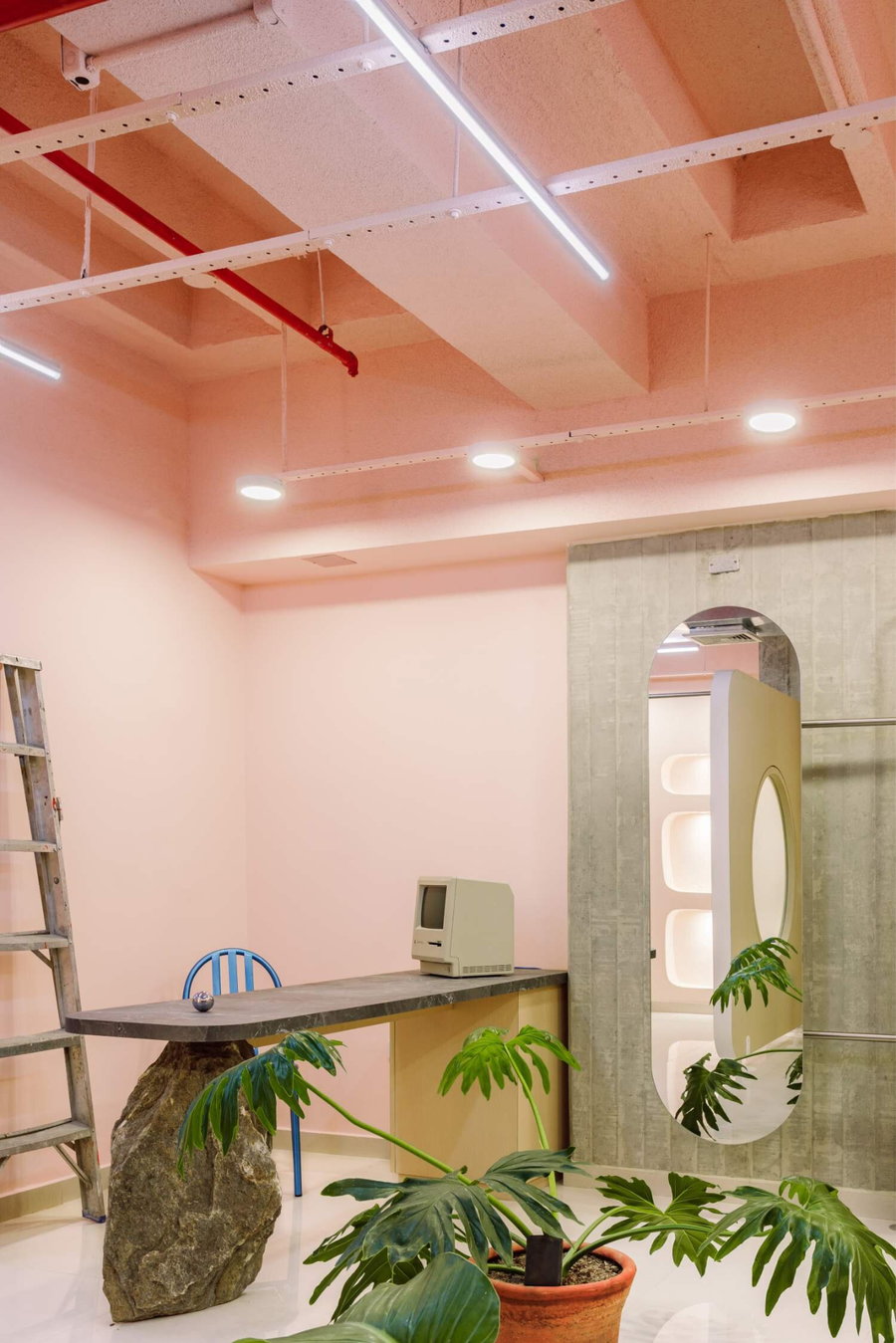 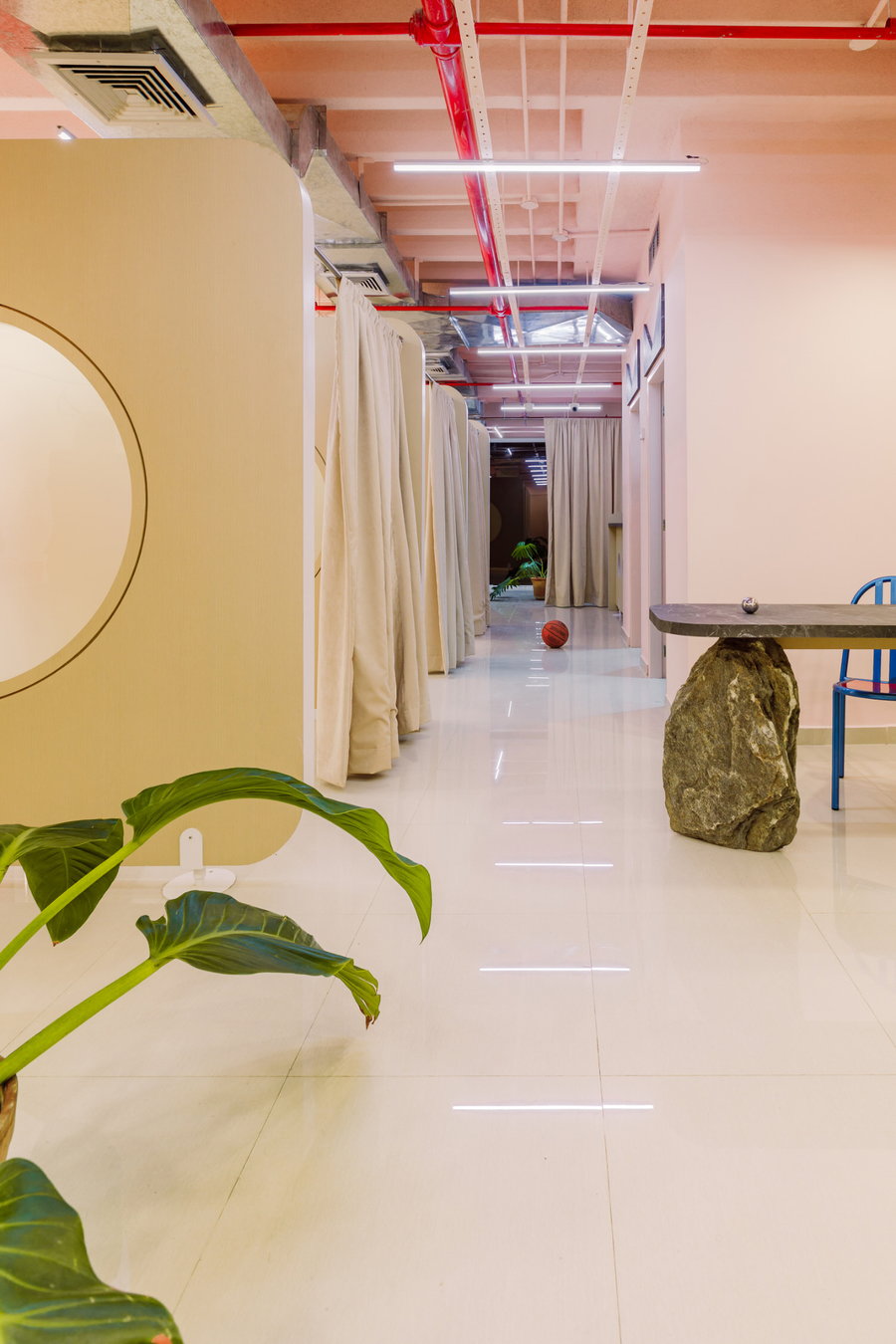 “Considering that the location is in a considerably busy area of the city, [the clients] desired it to act as a pleasant hermetic bubble, an airtight space isolated from the noise of the city where its frequently polluted environment simply would not exist or apply,” say the architects.

“Contemplating the concept of ‘outer-worldly’ led us very quickly to consider analyzing and dissecting the visual aesthetics of Stanley Kubrick’s seminal sci-fi movie 2001: A Space Odyssey, in its staging and scenarios, and we decided to undertake architecture following those cues. We would endeavor through the deconstruction of the sets and scenography created by Kubrick and Harry Lange to generate more than a spa, to create a space of surreal perspectives, a diffuse threshold between earth and outer space.” 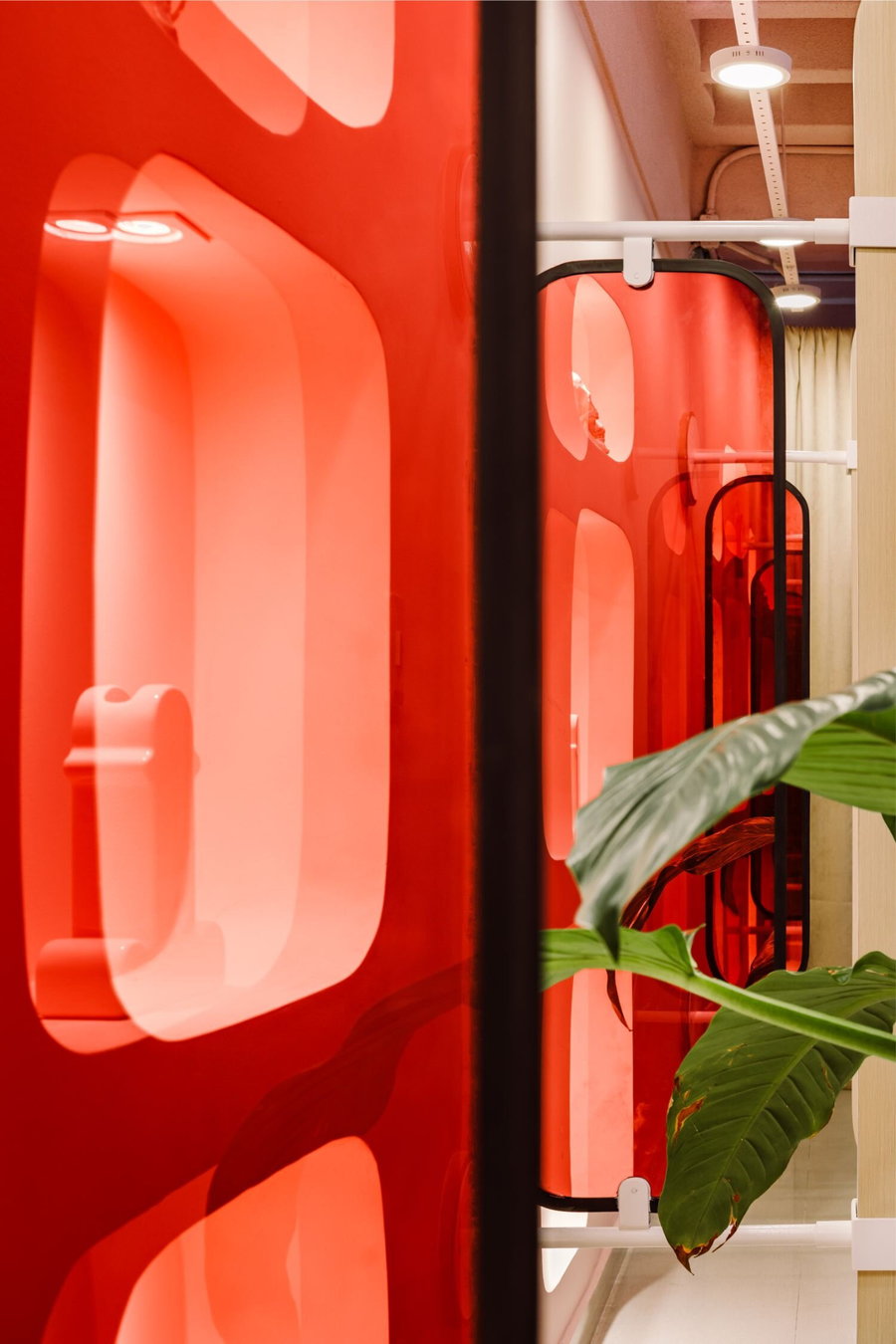 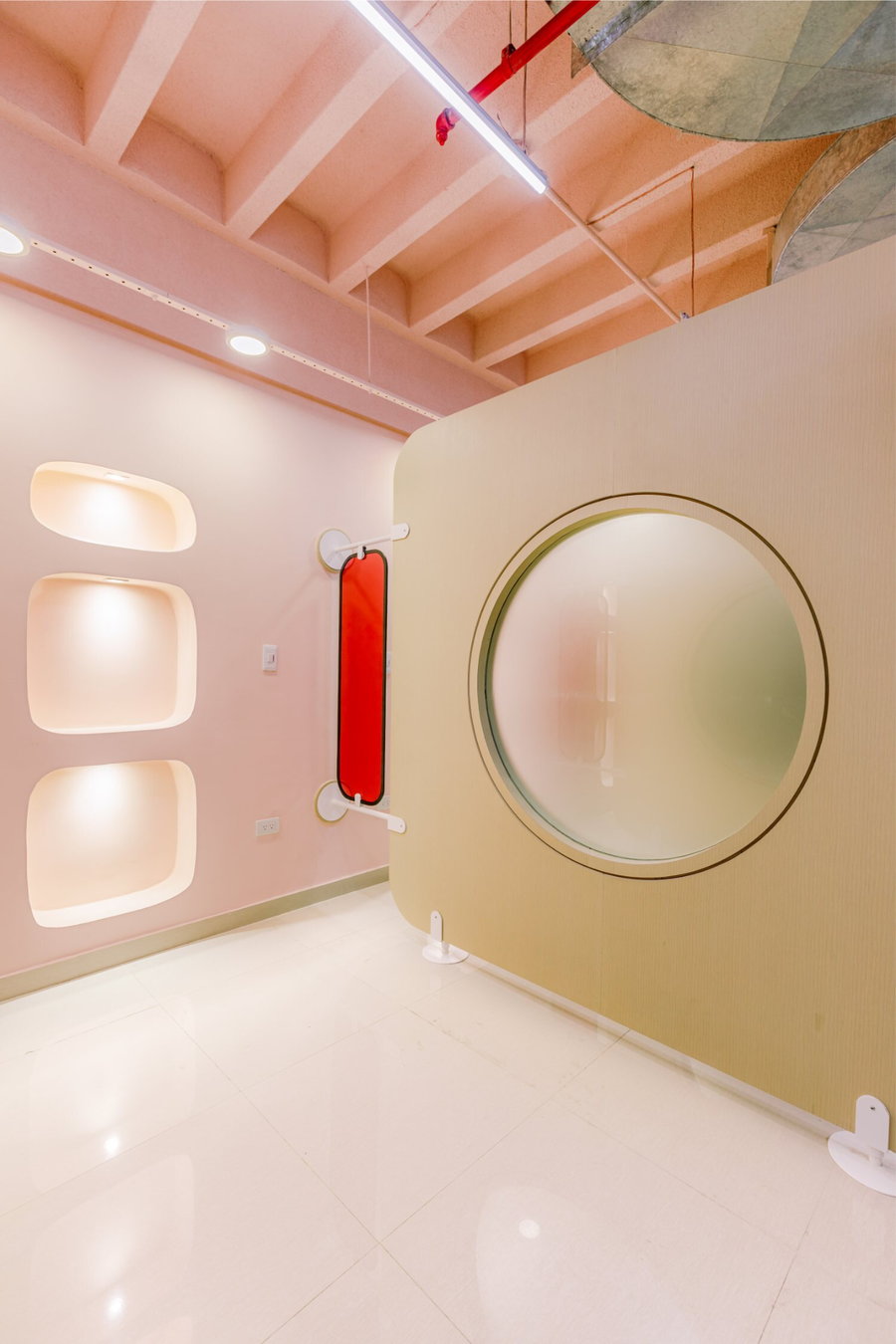 To keep it from feeling too much like a medical facility — or the probing room of an alien spaceship — the architects also added some warmth into the color palette. The walls and ceiling glow a comforting salmon pink, while pipes and translucent privacy screens enhance them with pops of red. Natural terrestrial materials like wood and stone, along with the occasional oversized leaves of philodendron, give the space a sense of gravity.

The sci-fi elements are there in the form of glossy white plastics, giant frosted oculus-shaped windows meant to evoke the movie’s sentient computer HAL, and capsule-shaped openings in formica walls. Bright white strips of LED lights mimic those seen in the film, but they’re softened and broken up into asymmetrical arrangements. You’ll also find the occasional sinister visual, like a tiled room with an Astroturf floor, a ceiling light fixture dangling by its wire, and even a fake skull in one corner. If you’re familiar with the film, more references make themselves known; even the rock supporting the reception desk is meant to evoke a meteorite. Would you feel relaxed and ready for a spa experience in these surroundings? Perhaps, if you’d just entered from the chaos of the urban environment outside, you’d feel relieved for the temporary break from reality, even if it comes with a vague sense of foreboding. 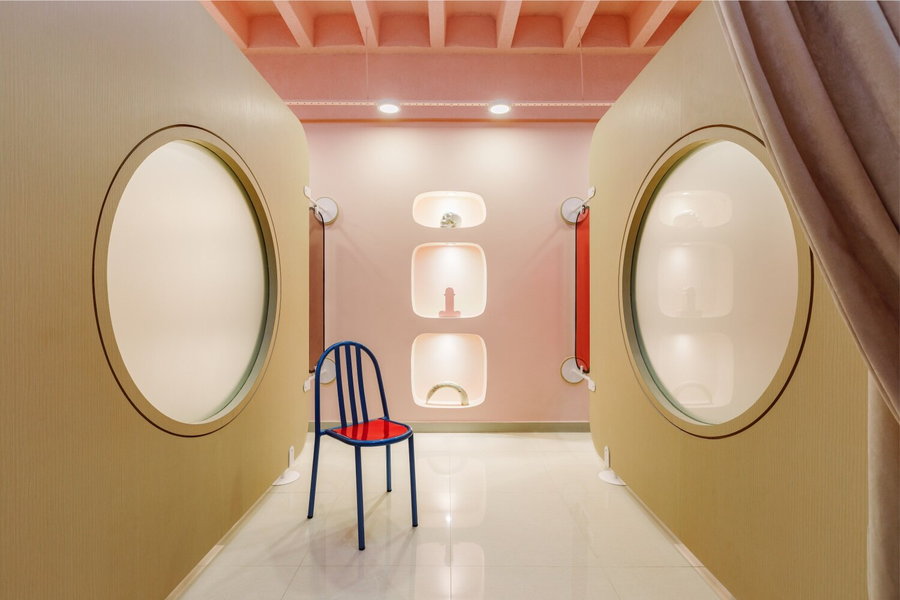 Atelier Caracas was founded in 2015 by Julia Kowalenko and Rodrigo Armas, drawing “strong influences from pop culture and everyday, as-found objects to create alluring spaces and objects at once humorous, thought-provoking, and symbolically charged.”