If you’ve seen Wes Anderson’s films before, you’re definitely noticed his highly distinctive aesthetic, even if you can’t quite put it into words. It’s not just the delightful vintage costumery or the romantic architecture that defines a signature Wes Anderson scene – it’s the perfect symmetry of many shots, the frequent use of slow-motion, the mood-setting color palettes and typography carried through each film, and the tint of the color filters that create a whimsical, dreamlike quality. Taken all together, the aesthetic is sort of like nostalgia for a past that’s a little too pretty to be real, as seen in films like The Darjeeling Limited, Moonrise Kingdom, and Anderson’s latest, The French Dispatch. 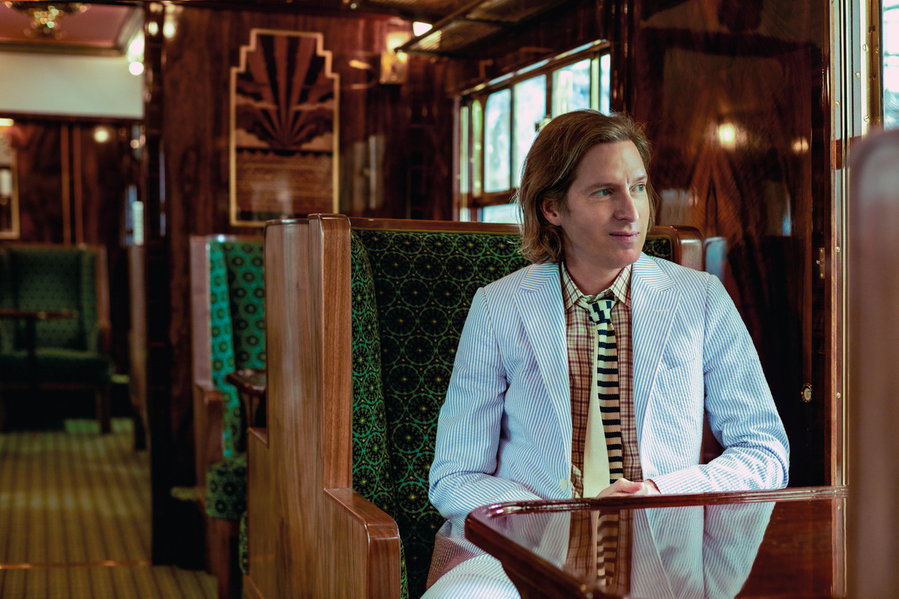 Now, Anderson has brought those same sensibilities to a real-world environment, a 1950s-era Cygnus carriage that’s one of eleven aboard the Belmond British Pullman train that operates from London’s Victoria Station. This train, initially made famous by Agatha Christie in her 1934 book Murder on the Orient Express and the subsequent 1972 film starring Dustin Hoffman and Vanessa Redgrave, is made up of Pullman coaches dating from the 1920s to the 1950s. Anderson was given free rein to transform the Cygnus carriage into his personal ideal, no doubt a treat for someone who’s so clearly enamored with old trains. 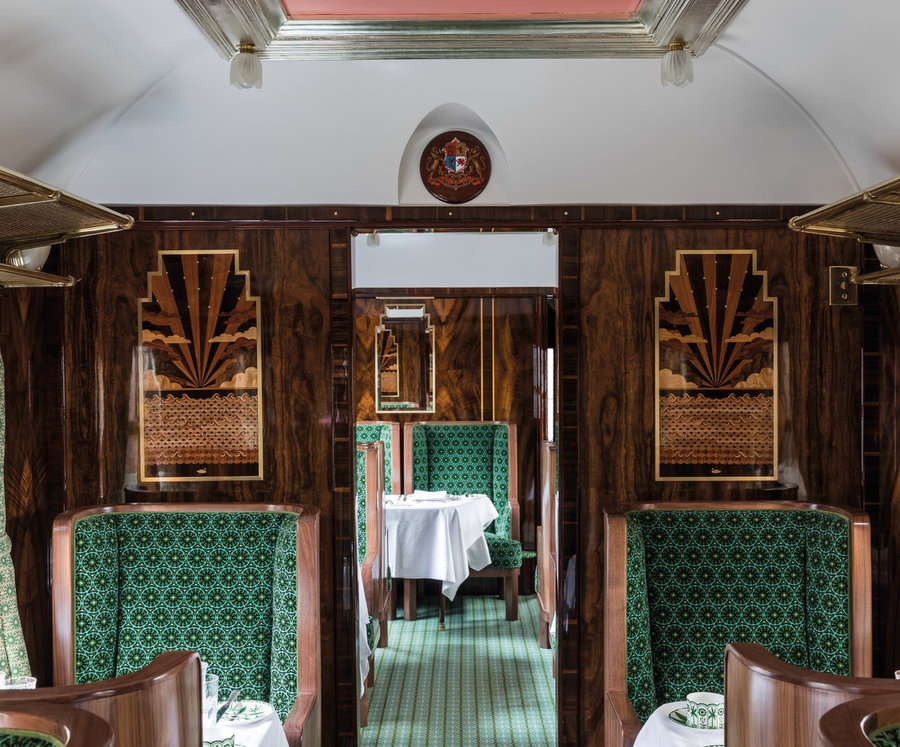 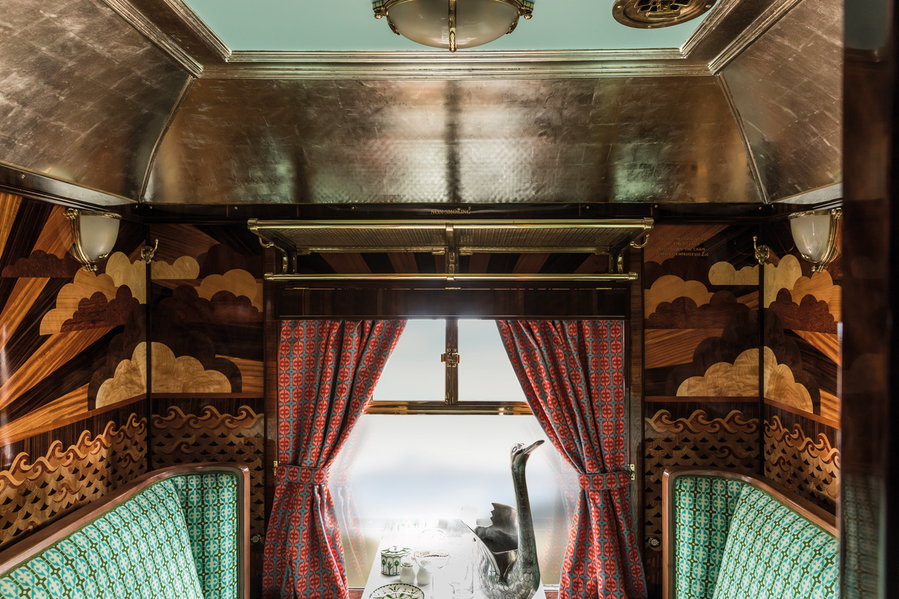 In fact, as Anderson exclaimed in a press release, “I love trains! I have often had the chance to invent train compartments and carriages in my movies – so I was immediately pleased to say ‘yes’ to this real-life opportunity, and very eager to make something new while also participating in the process of preservation which accompanies all the classic Belmond train projects.”

The carriage was already practically begging for Anderson’s touch, given that it’s named for the Greek god of balance, often signified by a swan. Anderson’s design incorporates angularity, symmetry, and intricate motifs to the Cygnus, including a pastel pink ceiling, a complement of jewel-like green tones, and ornate marquetry work like wood panels featuring sunbeams, clouds, stars, and waves. Little swans can also be found throughout the carriage in reference to its name. 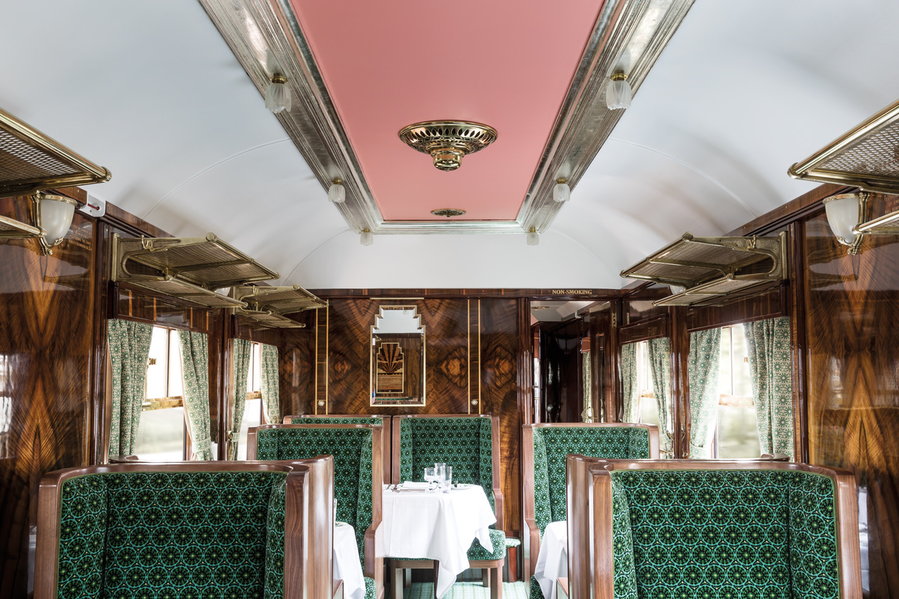 “Guests can ride in Cygnus on any journey on the British Pullman, a unique travel experience that rumbles across the rails all over England,” reads the Belmond website. “Whether a murder mystery lunch through the Kent countryside or a sparkling dinner hosted by an up-and-coming guest chef, a ticket in Cygnus means you can experience the Golden Age of Travel while appreciating the beauty of modern design. With two private four-seat coupes or seats in the open carriage, the choice is yours.” 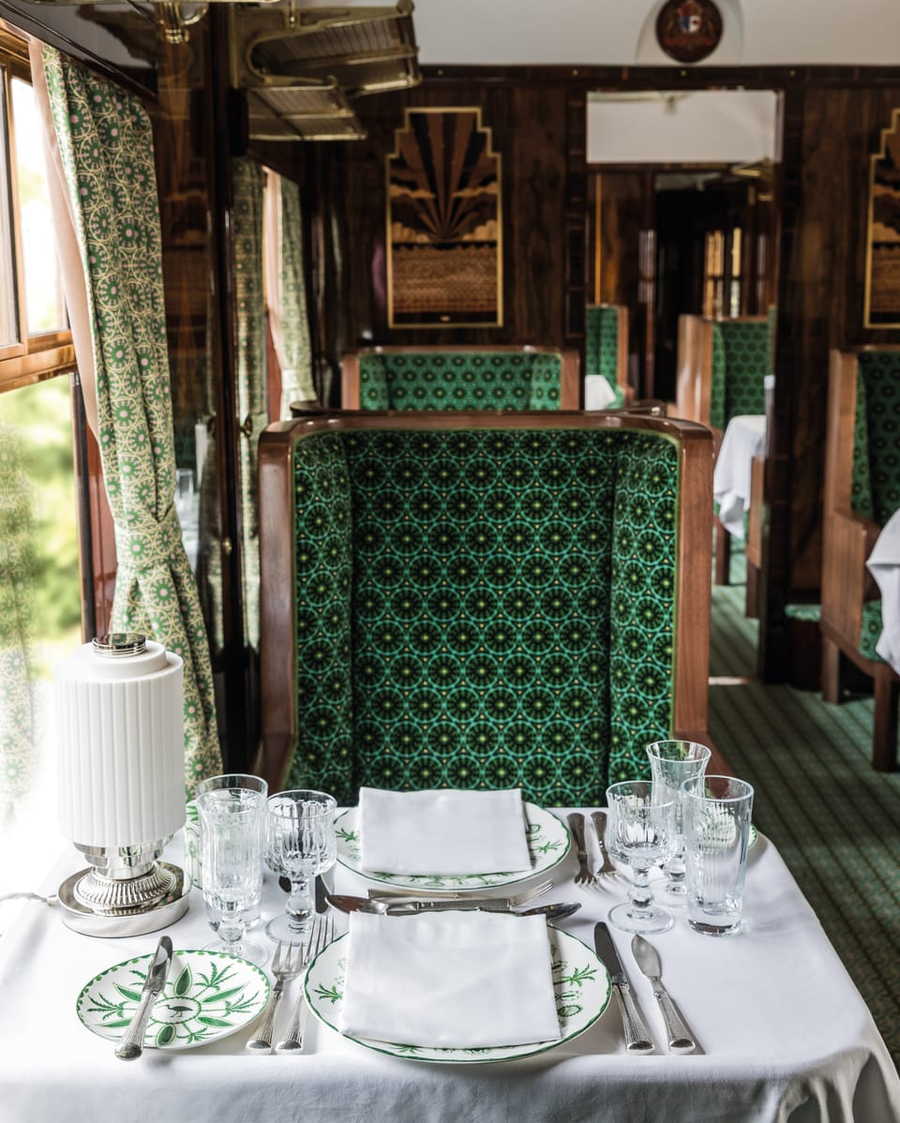 If you’re hoping to book a ride on the Belmond yourself, expect rates for an open table to start at $545 per person. Or, you can book one of two private coupes with seating for four guests, who’ll also enjoy unlimited champagne at a price of $2,455. You can even book the entire carriage for a private event hosting up to 26 guests (price upon request). 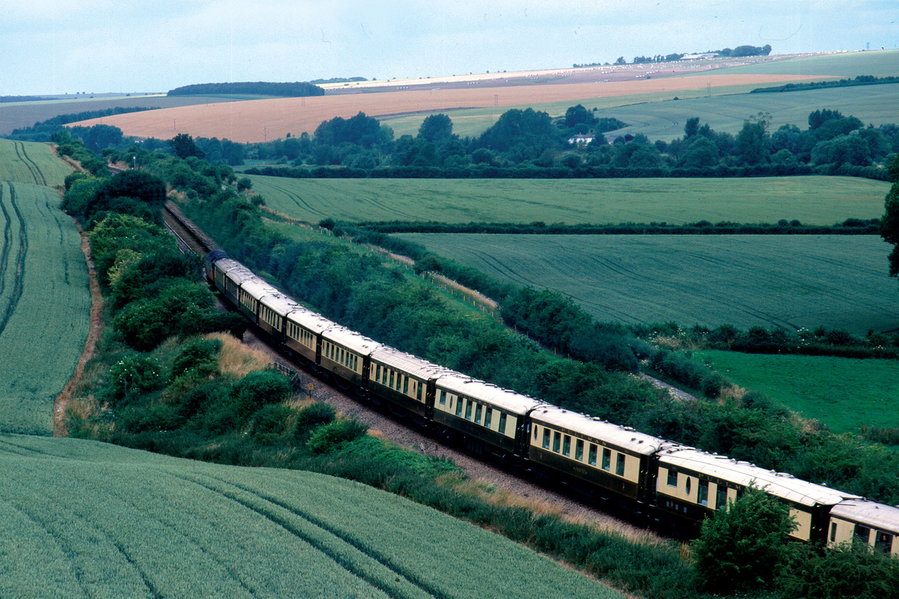 Occupying a space designed by Wes Anderson himself is certainly a rare experience, but you can also visit places that were explicitly inspired by his aesthetic, but designed by other people. The Budapest Cafe by Melbourne-based firm Biasol is one of those places, itself an eatery located in Chengdu, China that aims to capture Anderson’s visual flair. And if you dream of making over your own interiors in Wes Anderson style, we have some fun tips to try out.