It could be argued that we already live our lives as monuments to corporations, so why not make that adage literal by molding our houses after them? Architect Karina Wiciak of Wamhouse Studio recently designed a series of stark concrete residences modeled after the shapes of four major corporate logos: Adidas, Chevrolet, Renault, and Mitsubishi.

The project began with “Trihouse,” which takes the three bars of Adidas’ logo and sets them diagonally into a foundation. Wiciak told Dezeen that the idea came to her accidentally when she just saw the shape of a building in the logo and realized the idea had potential. The concrete “bars” of the logo are divided by glass to create a spacious, open four-story home filled with natural light. 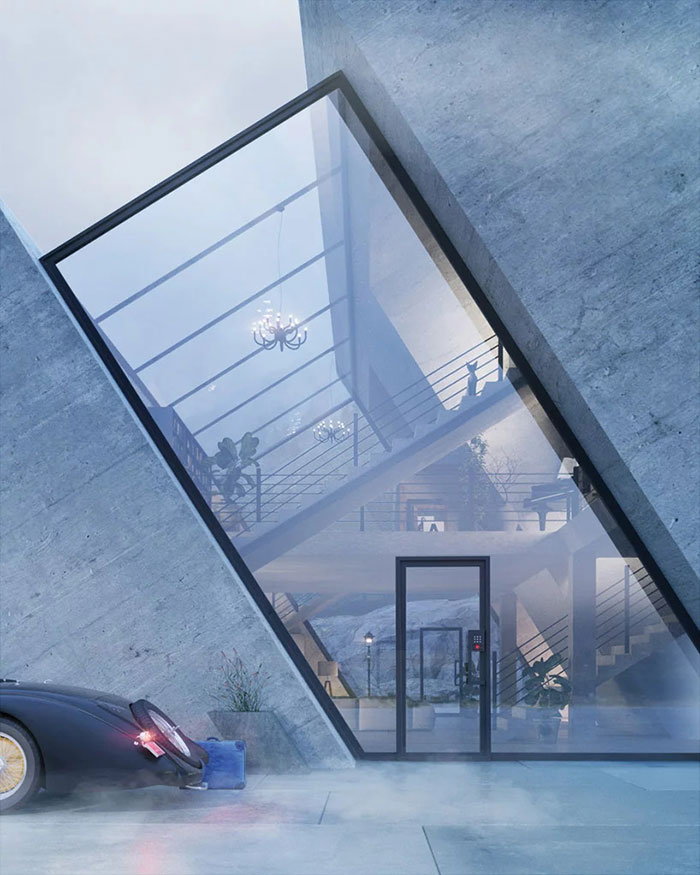 Wiciak’s plans place the kitchen, living room, dining room, recreation room, pantry, and a restroom on the Trihouse’s largest lower level, while the second floor offers quieter communal spaces like a study room. On the upper levels are the bedrooms and private bathrooms, though one does wonder if there’s any way to cover those enormous skylights to block out moonlight and early sunrises. 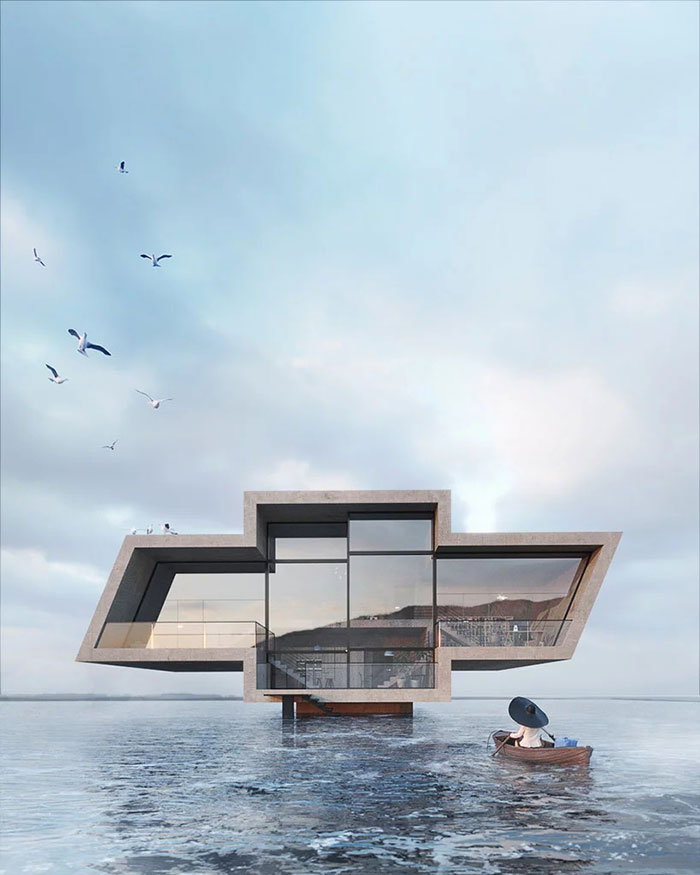 The cross shape of the Chevrolet logo naturally makes it well-suited as a home that’s elevated on some kind of plinth, either as a sort of observatory or as a remote residence set above a body of water. Wiciak envisions the latter for “Crosshouse,” with the face of the logo rendered as a glass facade. This two-story, 2,637 square-foot home is only accessible by boat and features private spaces like the bedroom in it’s darker back half, with shared social areas like the living room and library in the front. 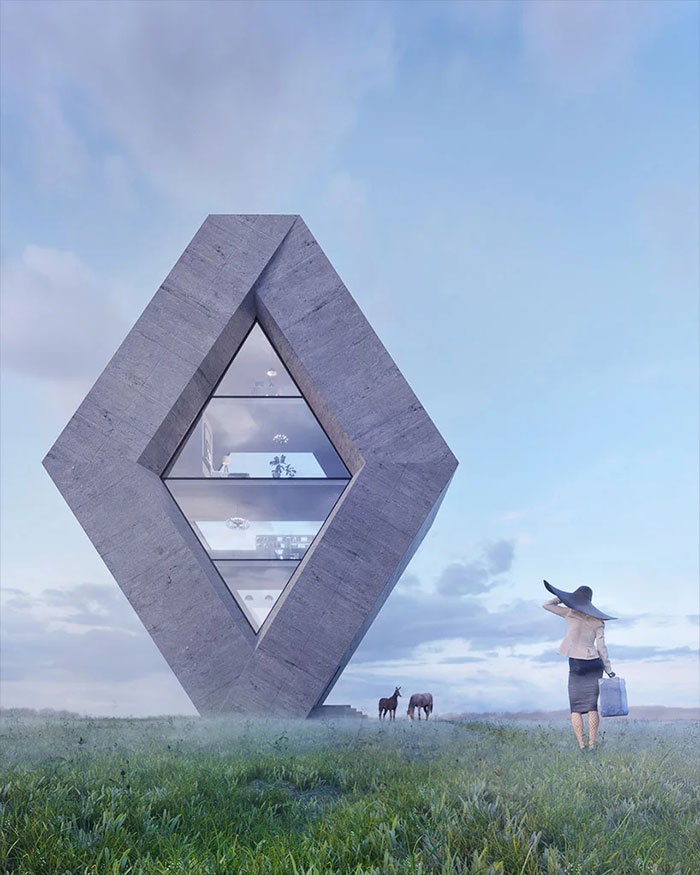 “Rhombhouse” takes its diamond shape from the logo of car manufacturer Renault. Imposing and intimidating in its proportions, this tall, narrow structure looks a bit more like a Soviet monument than it does a home. Its four stories loom over a grassy landscape. About the same size as the Crosshouse, the Rhombhouse is more luxurious in its lofty shape than it is in its square footage. 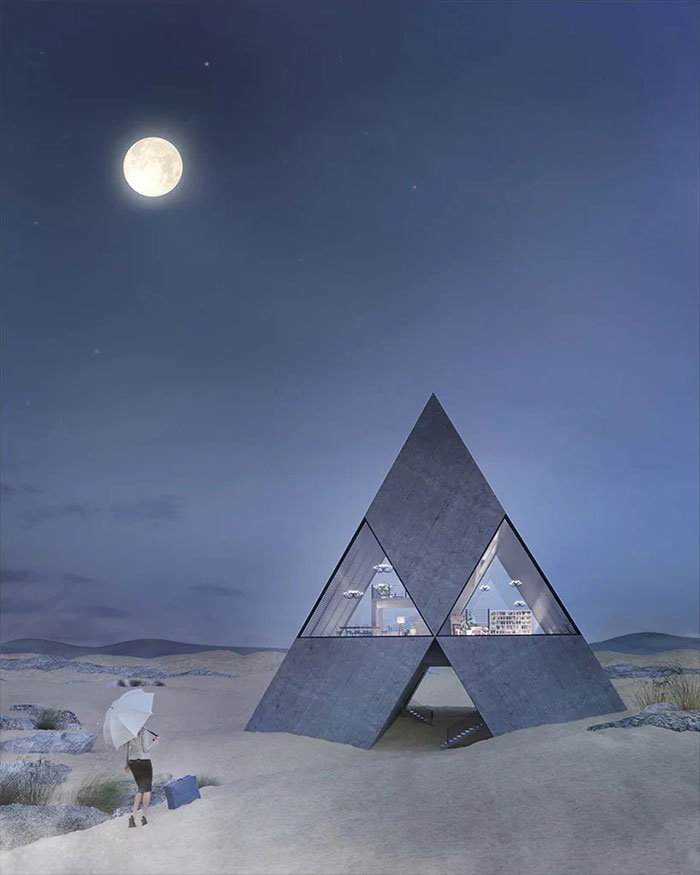 Finally, there’s the pyramid-shaped “Pyrahouse,” based on the three triangles of the Mitsubishi logo. Two of the spaces between the triangles are filled in with glass, while the third is left open to the sand underneath. This fourth house features storage areas in the lower levels, a large, open-plan living space in the widest part of the home, and two private floors rising into the uppermost peak.

The use of corporate logos, concrete, and stark, minimalist shapes gives these houses a bit of an ominous feel, and it’s easy to imagine them as settings in a dystopian film that’s only a few steps removed from our current reality. 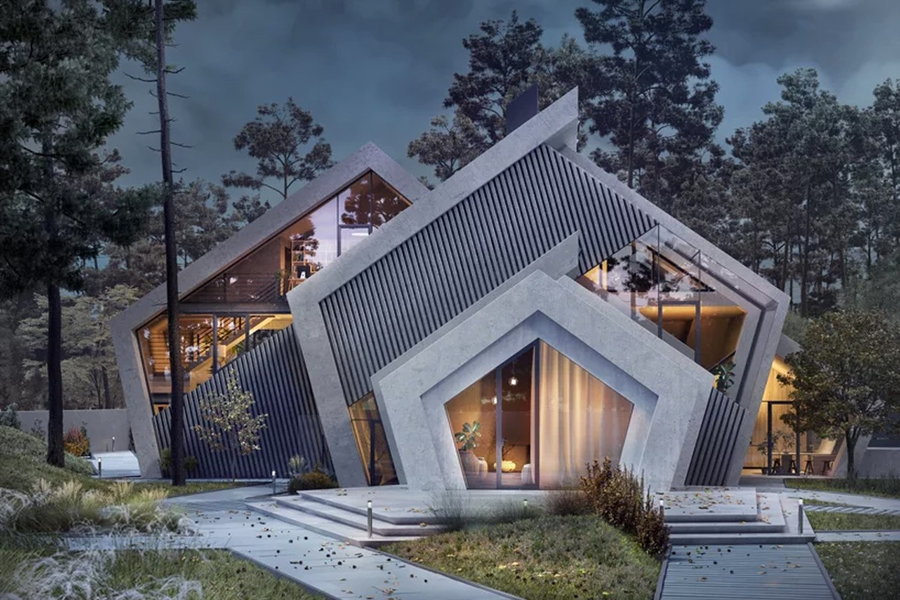 For Wiciak’s part, however, it seems that the series is less about corporate identity, politics, or economics than it is about potential overlap between graphic design and architecture. Wamhouse has already shown a predilection for unusual geometric houses made largely of concrete. “Pentahouse,” for example, is a single-family home consisting of extruded pentagons of various sizes connecting with and overlapping each other to create a shape reminiscent of a mountain range.