A new ice cream shop in Iceland’s Perlan museum is getting a lot of buzz for its eye-catching, stalagtite-like interiors. Taking inspiration from the country’s natural beauty, as well as from the museum itself, interior design company Atelier Tobia Zambotti imagined the space as a glacial cavern adorned with blue and white conceptual icicles. 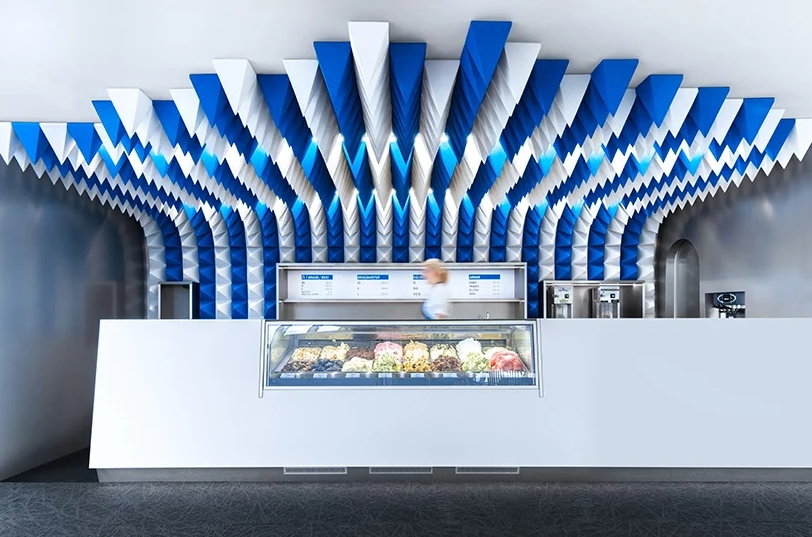 These foam pyramids alternate in a polychromatic pattern of columns, beginning at the ceiling and cascading boldly down the wall. The effect draws the observer’s eye down into the store’s icy man-made grotto, and of course, to the ice cream counter that features frosty treats in shades of mint, chestnut, and peony pink. 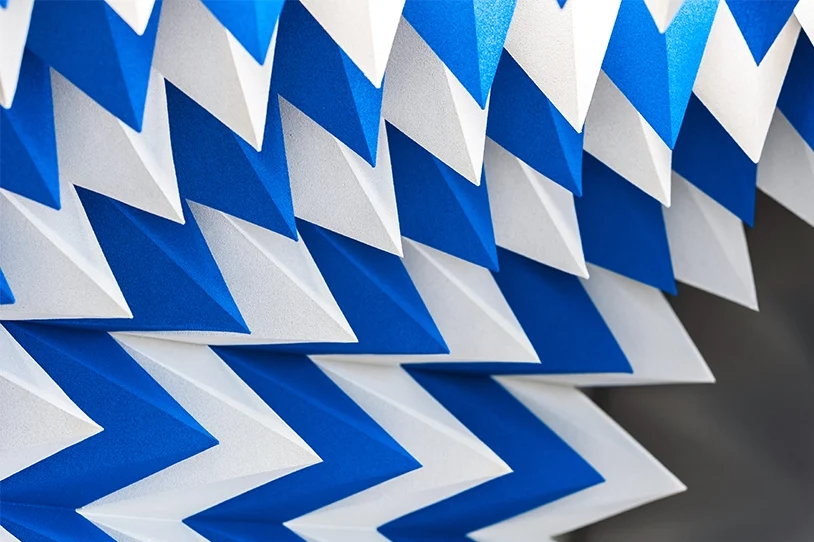 “The idea was to create an abstract ice cave,” says the design firm’s founder and namesake Tobia Zambotti in an interview with mbl.is. He adds that “the project description was very simple. What I had to do was design something Instagram-friendly and iconic with a strong ID.”

The design certainly accomplishes those goals with its use of dramatic shapes and colors, making it ultra-popular on social media platforms around the world. That exactly’s what Gunnar Gunnarsson, managing director of the Perlan, was hoping for when he commissioned the project to “change Icelandic ice culture.” His aim is for the ice cream, produced on site, to entice patrons to linger longer at the museum, delving deeper into its geological displays. 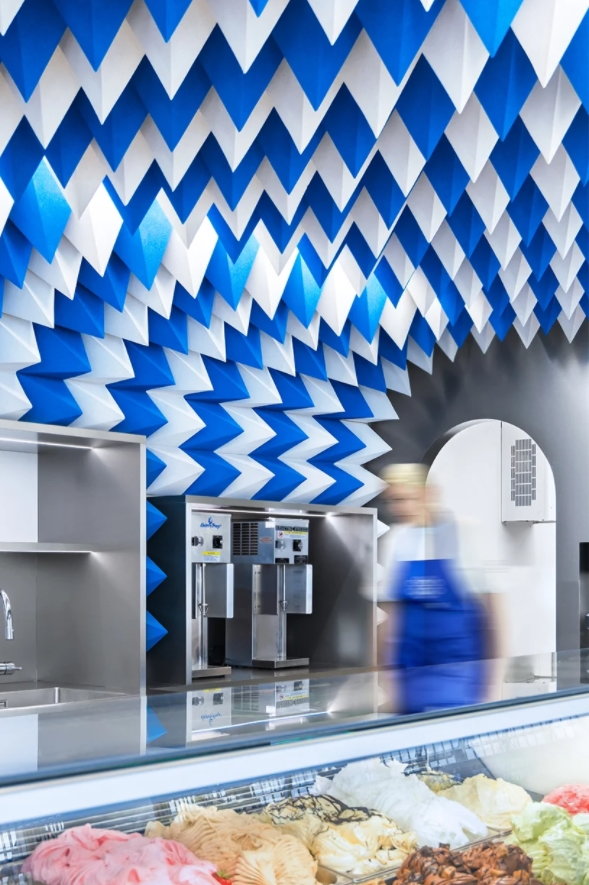 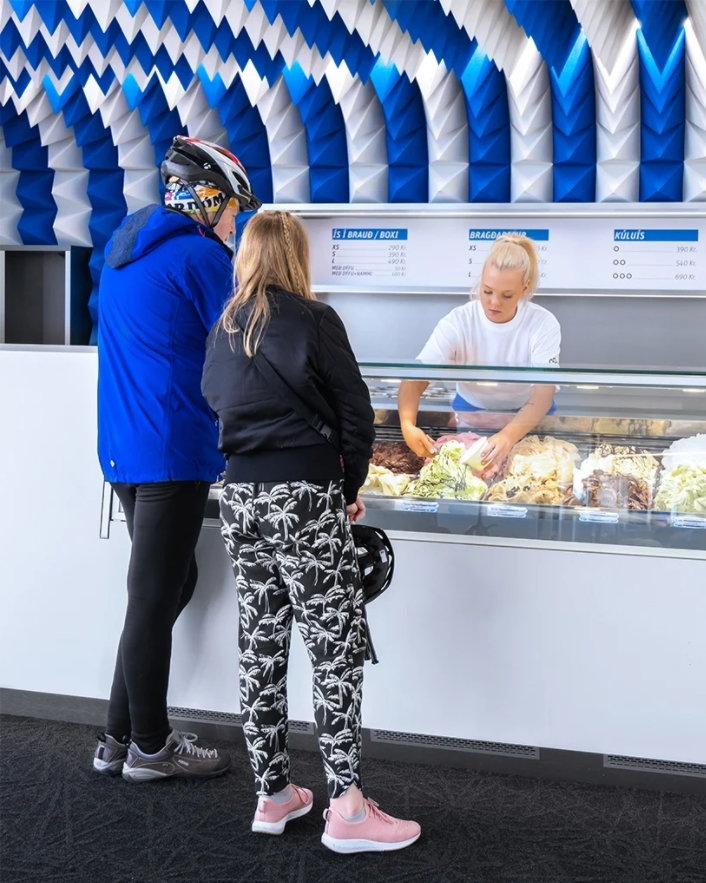 To have the installation fit into the landscape of those exhibits, including the ground floor’s 330-foot real ice cave made from 350 tons of snow, Zambotti wanted the art to be an immersive experience. He had the triangular icicles constructed of sound-dampening foam that hushes the mechanical drone of the nearby freezer. “I decided to use this material because the ice machine is very loud,” he explains succinctly. The insulated design acoustically adds to the cave-like feel of the ice cream parlor.

The 540-square-foot shop also features a stainless-steel shelf at the back that highlights the menu and is illuminated with LED light strips that reflect the cool, glacial hues of the ceiling. On top of that, the main counter is constructed of sleek white Corian, producing the visual effect of a polar wall of ice. 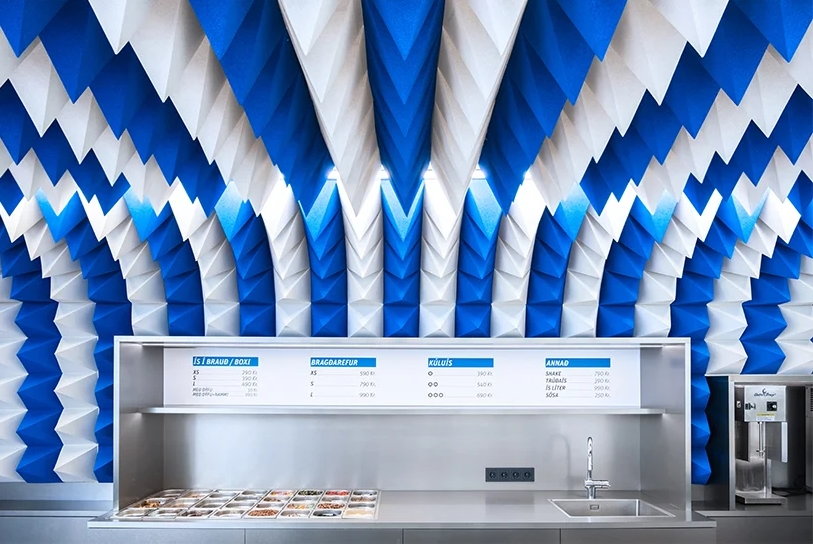 Originally from Italy, Zambotti studied architecture in Vienna and interior design in Milan. Upon graduation, he got a position in Shanghai working with award-winning design firm Alberto Caiola Studio. After a year in China, Zambotti traded his chaotic life for a “very quiet one” in Reykjavík where his wife already lived.

That transfer put him in connection with the Perlan and director Gunnarsson. One of the country’s most popular museums, the Perlan sits on a hill 200 feet above sea level and is built on top of six giant water tanks, each containing over 1,000,000 gallons of water pulled from underground hot springs. The objective of the building’s exhibits, according to the Perlan website, is to let guests “see, hear, and feel the power of volcanoes, earthquakes, and geothermal energy.” It features planetarium shows of the northern lights, a cinematic underwater tour of Iceland, and an augmented reality cliff-face experience. 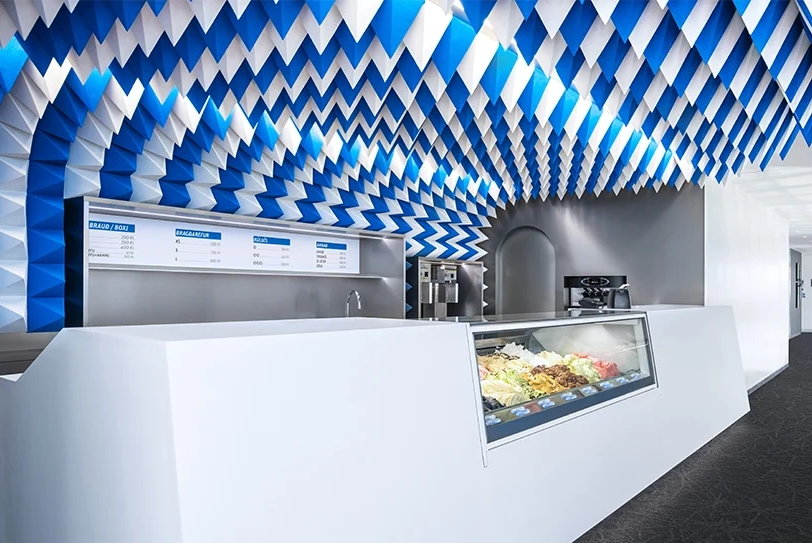 The onset of the COVID-19 crisis diminished initial public exposure of the ice cream shop installation after its June grand opening. However, Gunnarsson is pleased that foot traffic is increasing now, allowing the shop’s innovative Zambotti design to gain more widespread notice.