Interior design is a combination of colors, textures, furniture placement, and product selections that collectively give a space a certain “vibe.” Personal preference drives selections and every person seems to have their own perspective on what they find to be relaxing or energizing, calming or motivating, cozy or eclectic. But beyond that, animals all have very different outlooks on your space, too. As curious as a cat, HomeAdvisor decided to look into a typical space through the eyes of animals to see if we could see what they see. What they found is insightful, to say the least, but it also just might provide the perfect frame of reference for your next redecorating project. 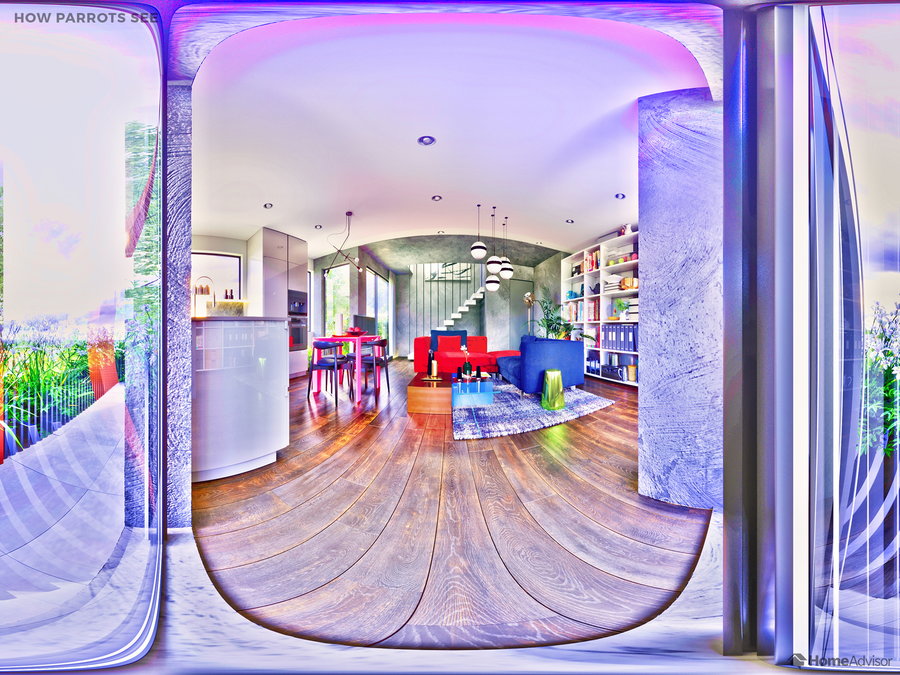 The team began by selecting seven animals with varying characteristics in the way of eyesight: dog, cat, goldfish, snake, tarantula, parrot, and chameleon. They then isolated room perspectives, looking across a pre-set space and down on it as an aerial view. Using scientific evidence regarding our understanding of animal vision, the HomeAdvisor team then created two renderings of each room/animal combination from both a human and perceived animal view. 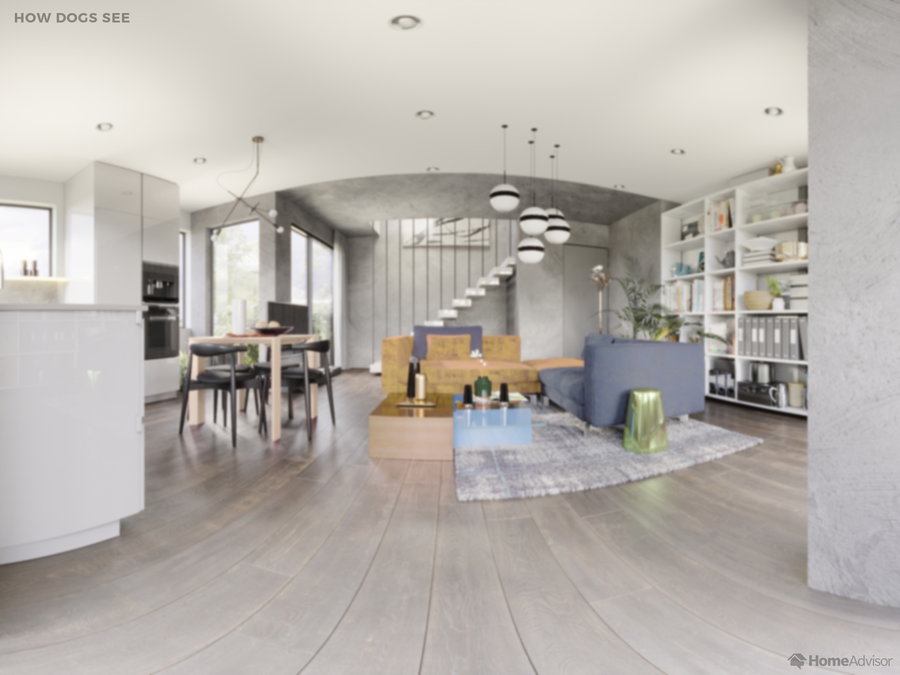 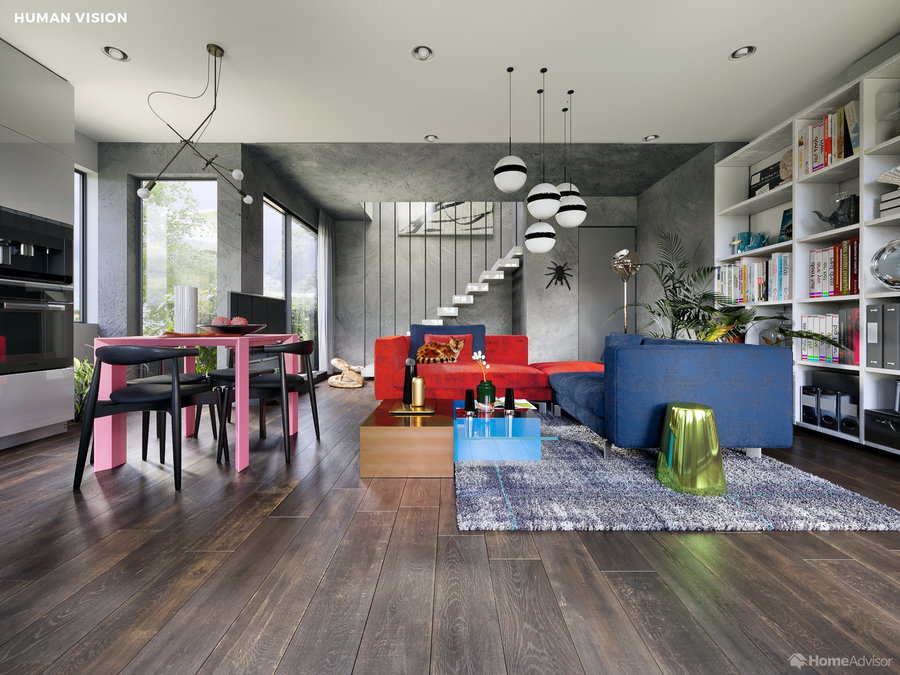 Dogs are able to see an array of yellows and blues, along with grayish brown. This means colors that appear bright to us appear dull to them. While that means Fido doesn’t necessarily care if his toy is red or brown, it also means he won’t appreciate the vibrant dog bed or sofa (at least, not the color of it). 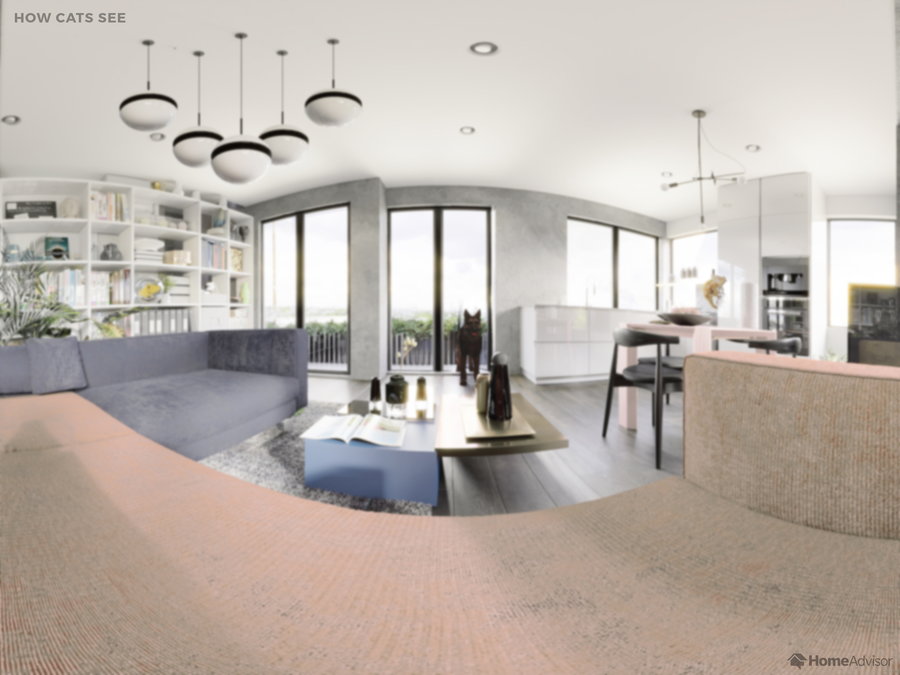 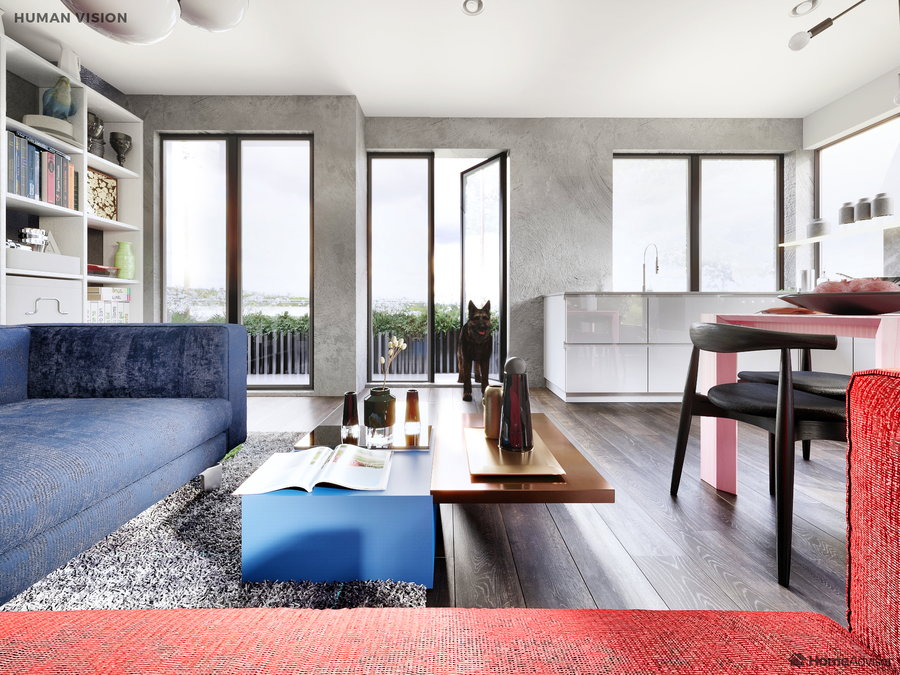 Cats eyes have similarities to our own, but they basically see things the way someone with colorblindness would. So again your color palette is wasted on the cats, but they can still appreciate green and blue toy mice. Because cats’ visual acuity is 20/100 to 20/200, the angles of the room appear also differently to them, which means they need to be closer to items to bring them into focus. You can now rest easy knowing that the bookcase across the room will be much less of a draw to them than you. 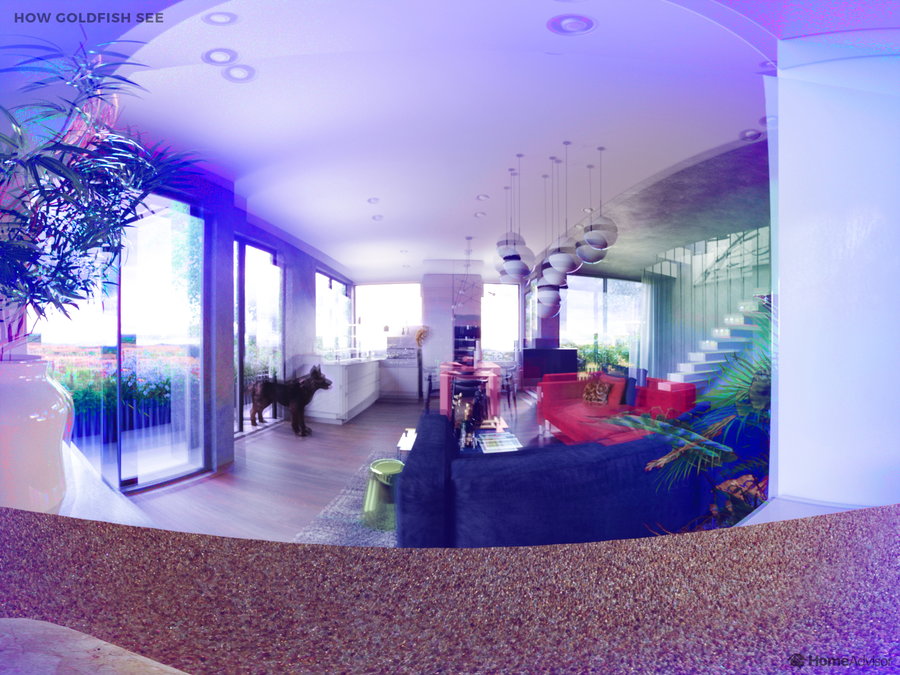 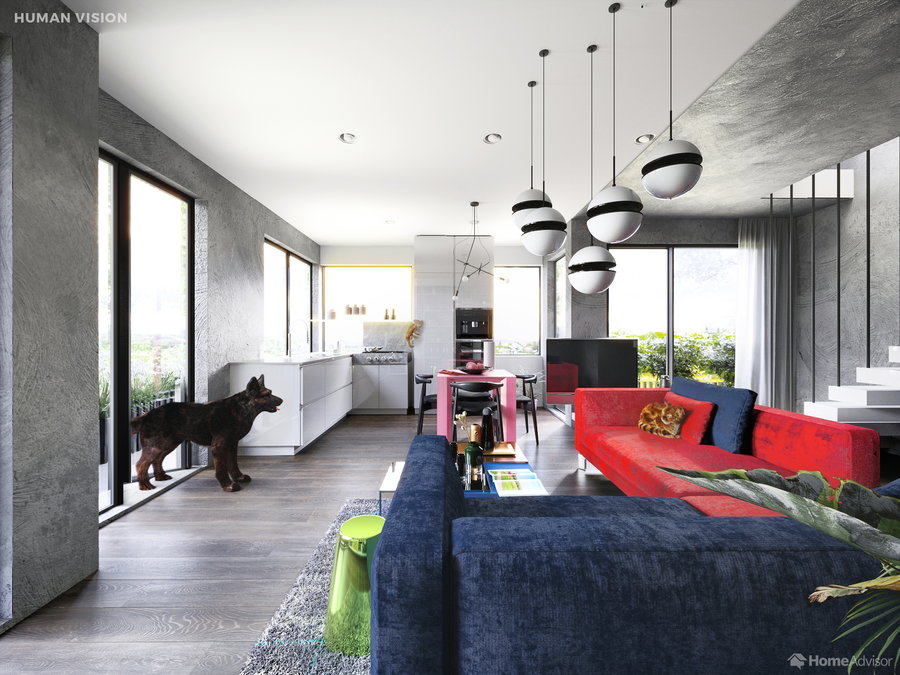 Your goldfish, on the other hand, can see a wider range of colors than you can because it can see UV light, an adaptation that allows it to see through water. However, a goldfish’s visual focus is remarkably less than a human, making your entire room look like it’s underwater. 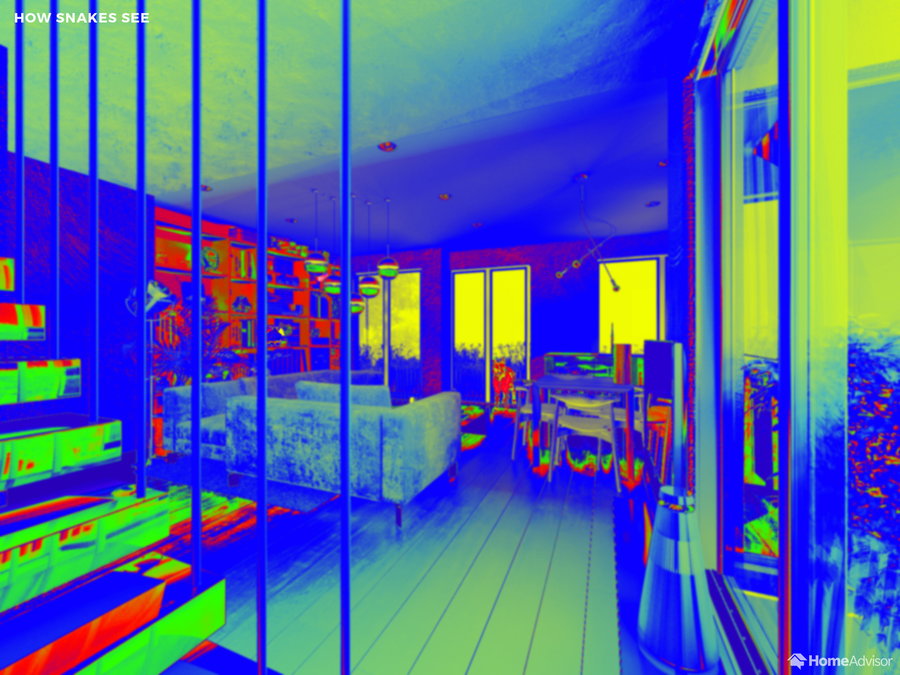 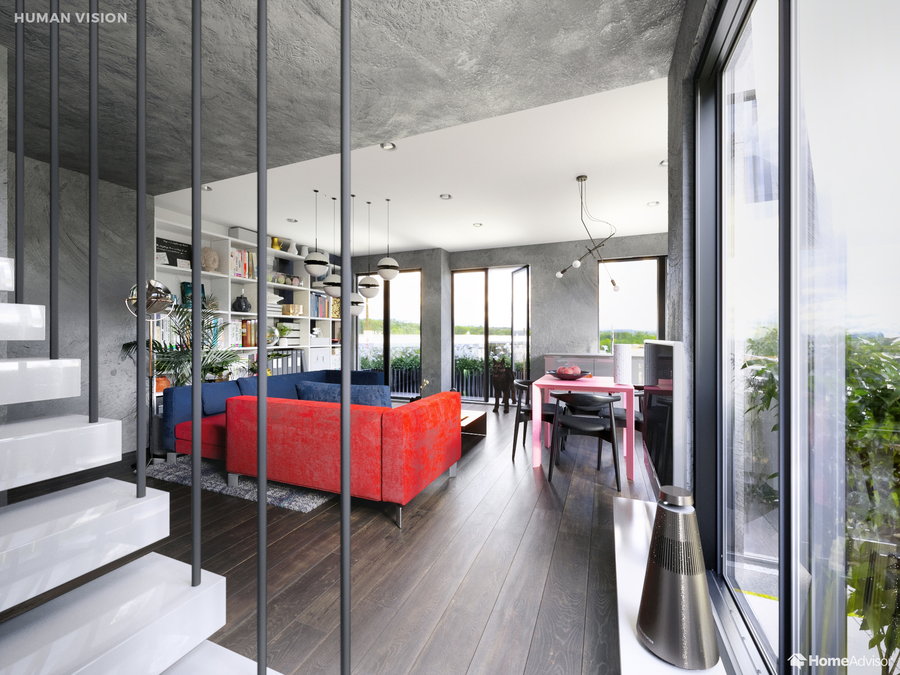 The pet snake may be safe in a tank, enjoying the spa-like heat lamp feature, but he’s likely not taking in the view from in there. This is because snakes, with few exceptions, have lousy vision. Not only does your room look like a photo development lab with oddly-lit blacklight highlights to them, but your reptile friend also won’t be able to bring specifics into focus. 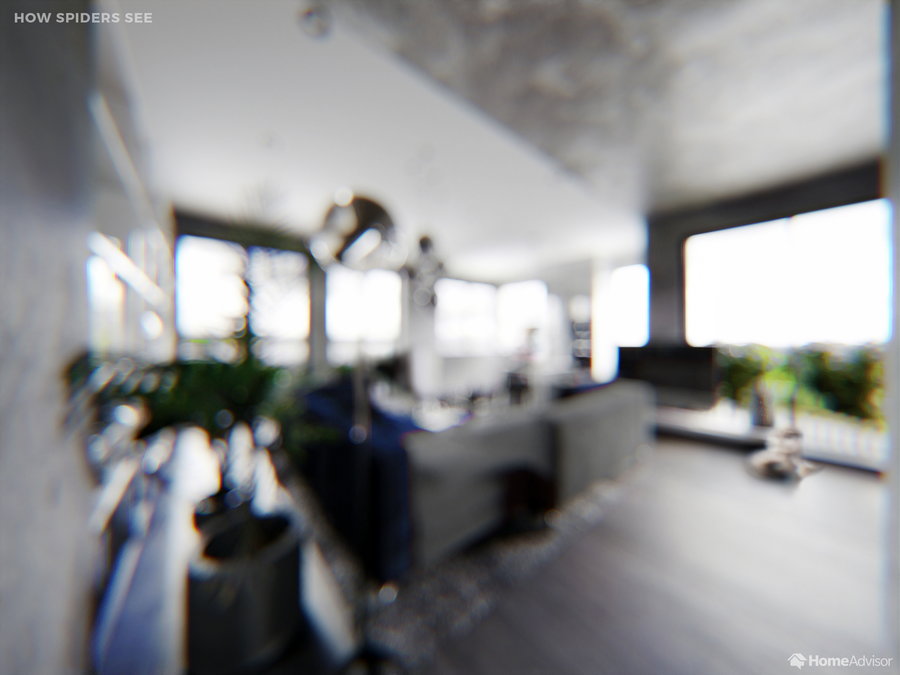 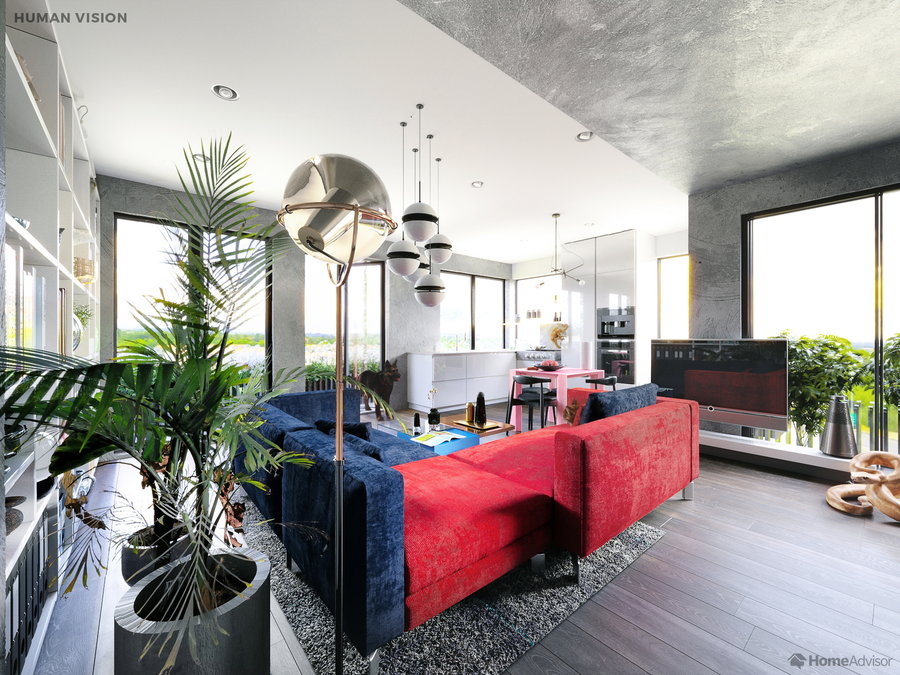 If your pet of choice is a tarantula, you likely won’t be going to him for interior design advice. Even with eight eyes, spiders have very poor vision, so your carefully decorated space will almost certainly be underappreciated by the arachnid in the corner. In fact, regardless of your design style, Mr. Tarantula will see little more than a gray blur. 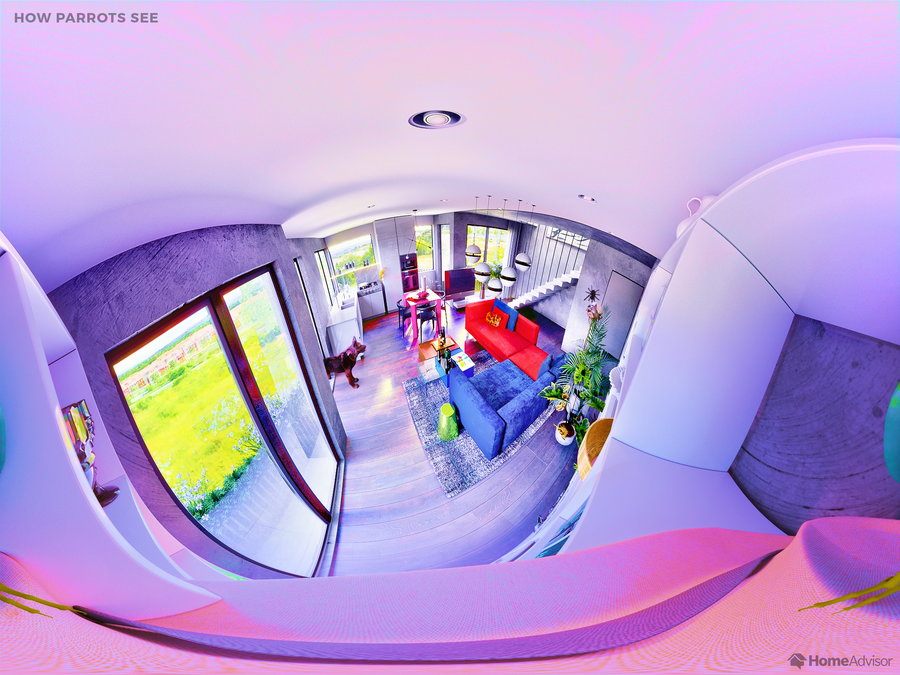 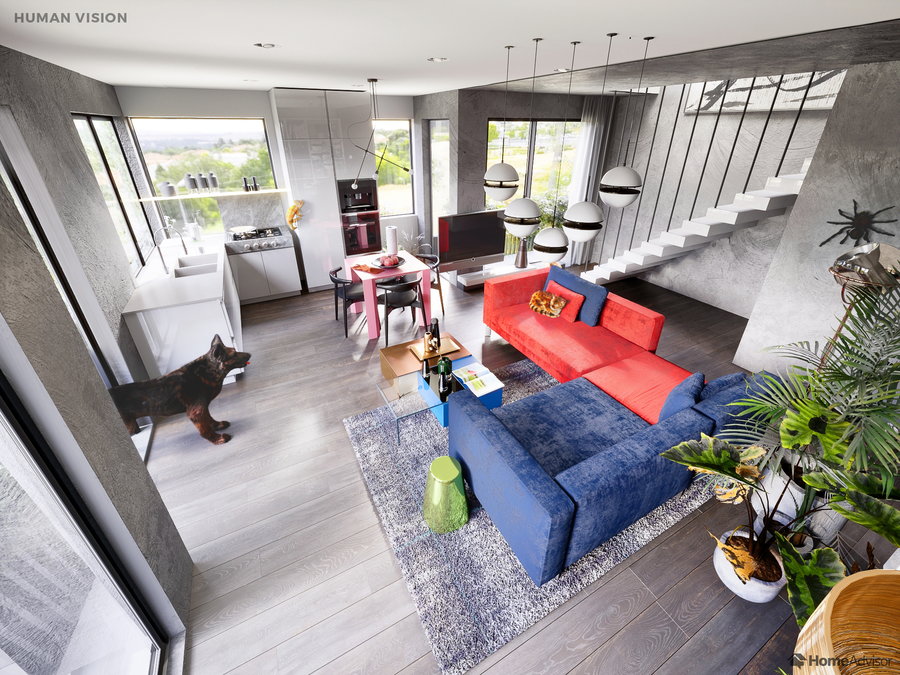 Parrots aren’t just colorful themselves — they also have a range of colors in their tetrachromatic vision. Where humans see red, green, and blue, parrots can also see UV. That means their perch provides a full-spectrum (and typically aerial) perspective of the space. So while the room will appear even more colorful to your feathered friend than it will to you, the spatial layout will be more fluid and less rigid than our eyes provide. 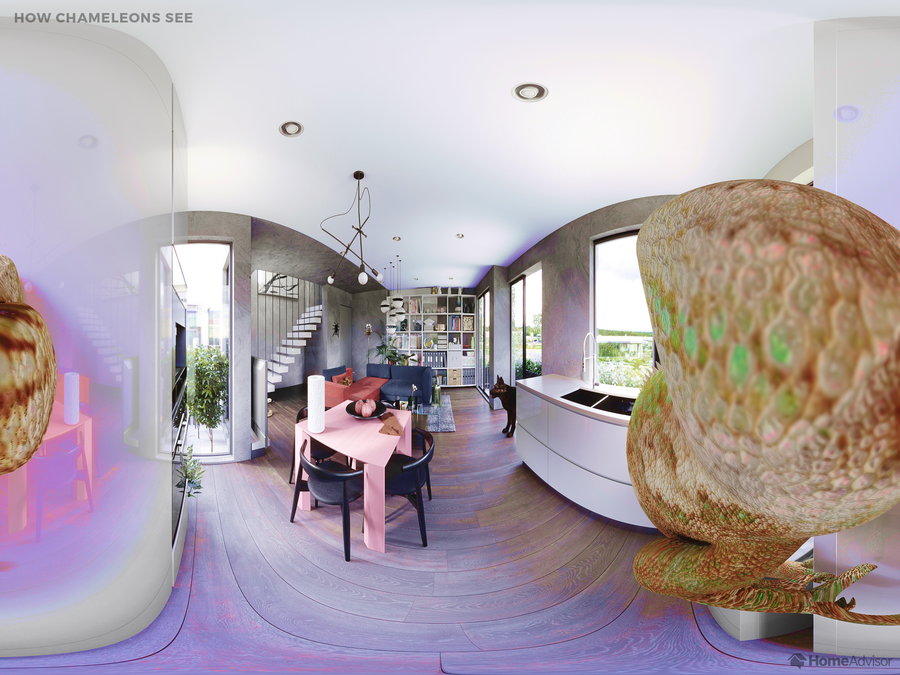 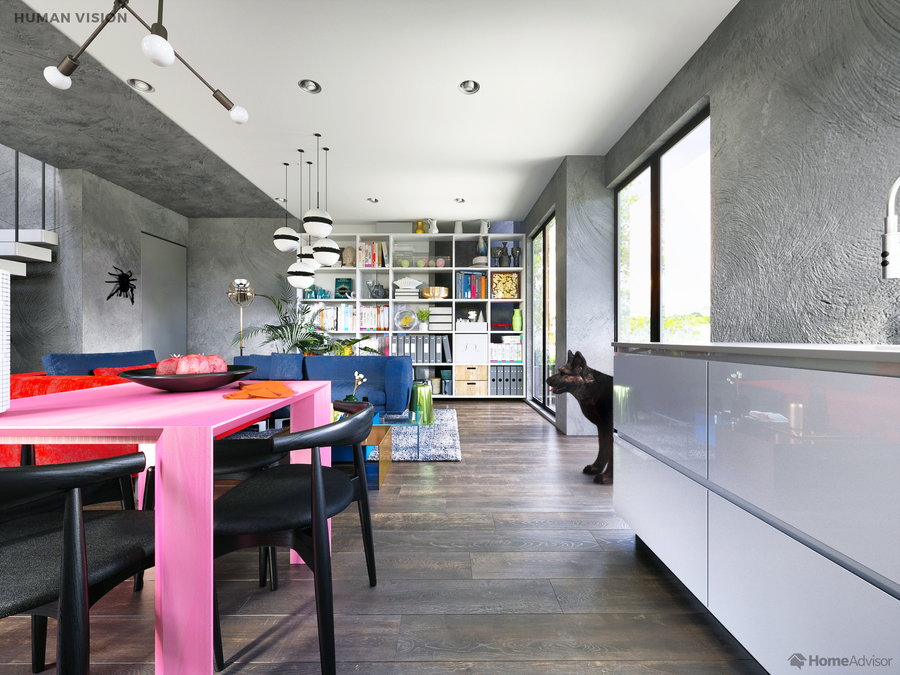 Finally, we have the chameleon, a well-adapted animal that almost literally has eyes in the back of its head. A chameleon’s eyes have the highest level of magnification of any vertebrate, so it’s like having your mother-in-law’s discernment in regards to minute details. To that end, every item is blown up in the chameleon’s perspective, and their panoramic vision allows them a super-wide range of space. Similar to your mother-in-law, if you want to hide the mess from your chameleon, just turn out the lights, as they have very poor vision in the dark.