From the outside, this building in Oaxaca, Mexico looks harsh and fortress-like. It’s a monumental concrete structure with no windows in sight. In fact, all that is visible in its inscrutable facade are a few wooden doors. There’s certainly nothing warm and welcoming about it. If you were to pass by it on the street, you might think it looked like a miserable place to live. 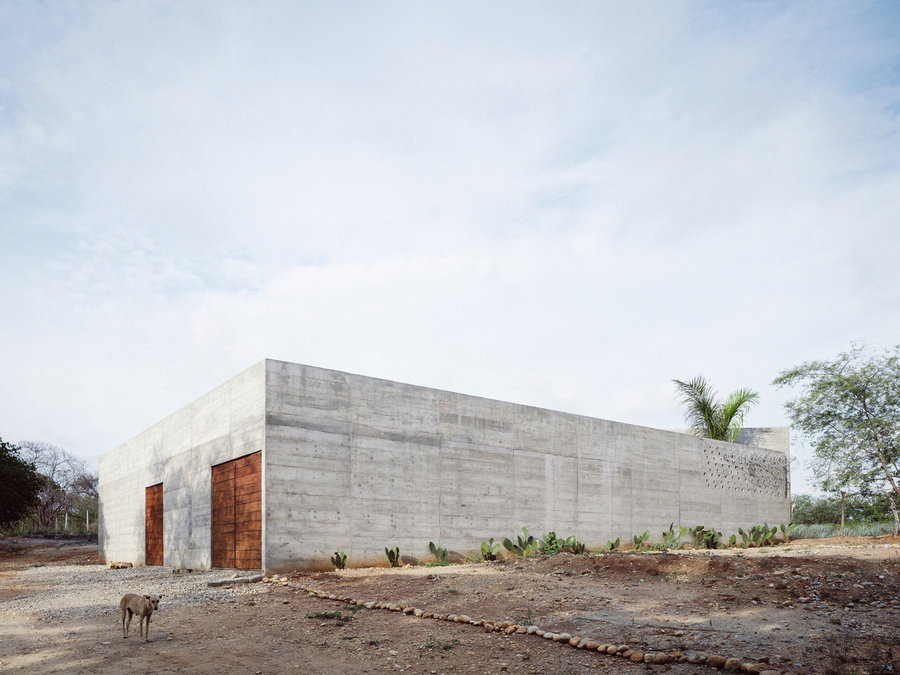 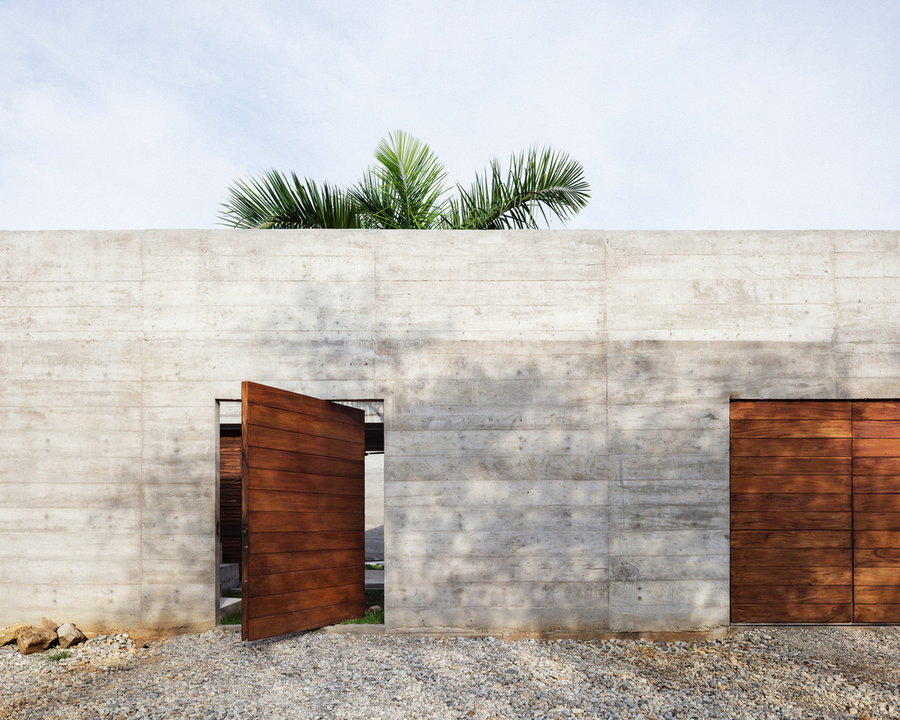 “Zicatela House” is proof that appearances can be deceiving. Designed by Mexico City-based architect Ludwig Godefroy and named for a nearby beach in the town of Puerto Escondido, it’s meant to look like a bunker to outsiders. Inside, it’s an entirely different story, with every one of its rooms and spaces designed around access to sunlight, fresh air, and views of the sky. 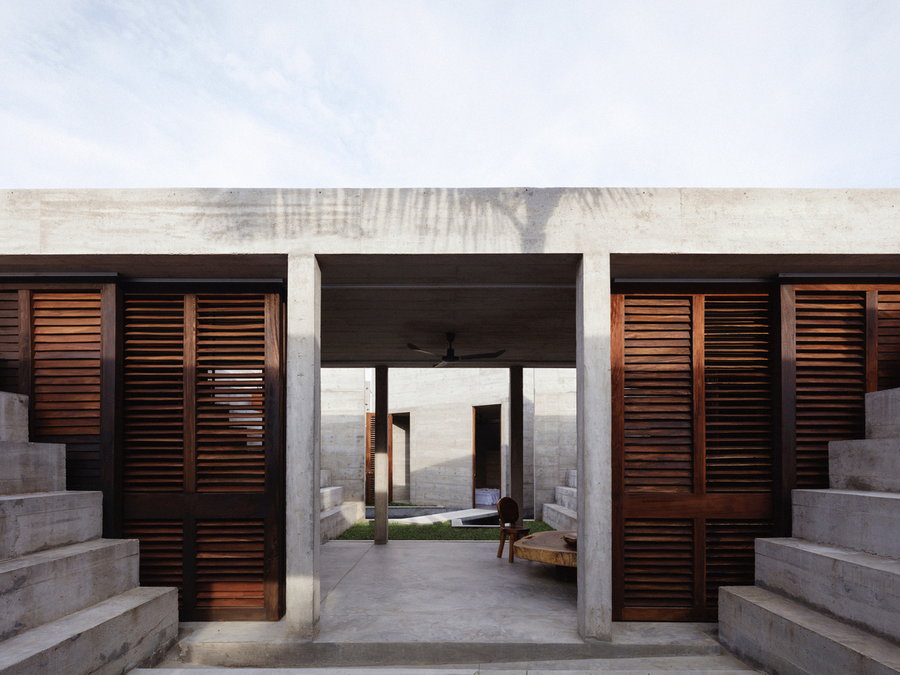 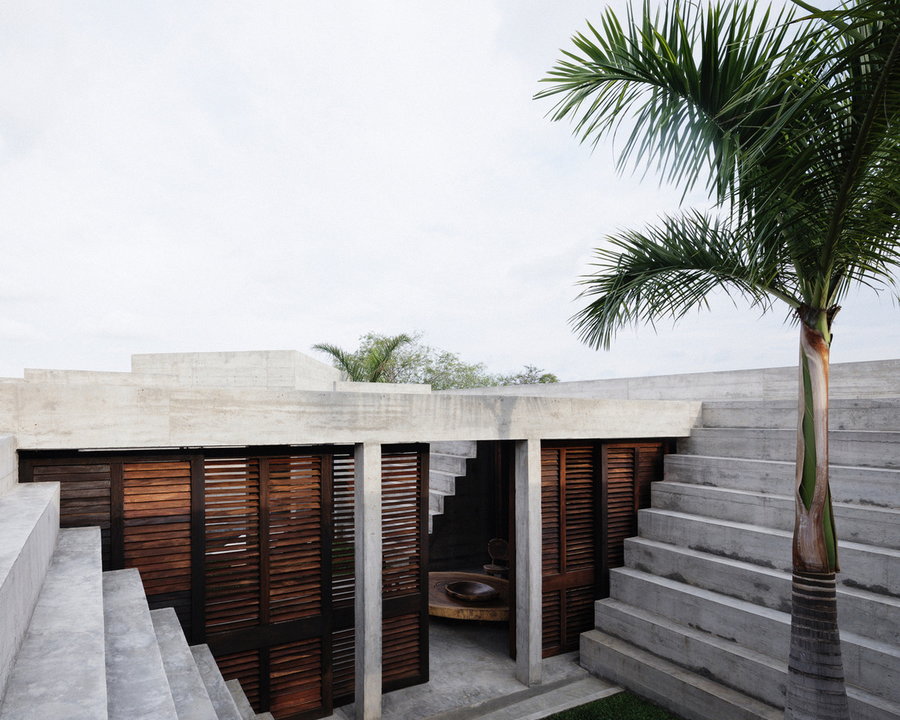 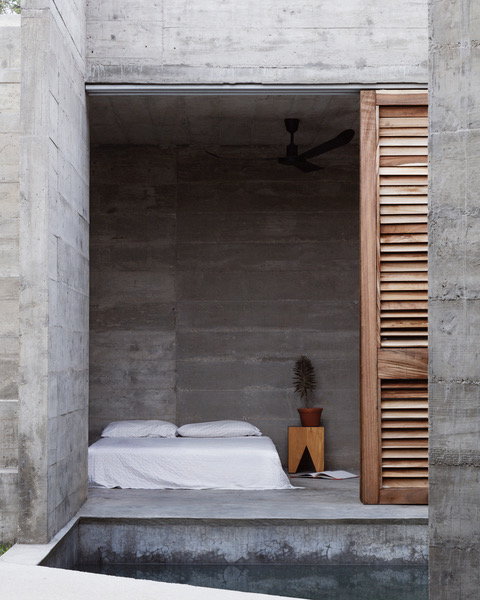 “The house was designed with one main purpose: to give the owner the opportunity to leave Mexico City to make a break with the megalopolis and urban habits by coming to get some rest and relax[ation] while enjoying the heat of the Mexican coast and the peaceful light of Oaxaca,” Godefroy says. “This house responds to a double landscape, on one side in the background the beach and the sea, on the other side the mountains and agave fields, the plant from which is made mezcal and tequila.”

Godefroy began working on Zicatela House in 2014 alongside his design partner Emmanuel Picault. The duo is best known for their nightclubs and bars, with their work often representing an alluring combination of modernist and pre-Hispanic influences. They based the design for this house on a Mesoamerican ball court surrounded by large symmetrical stepped walls. 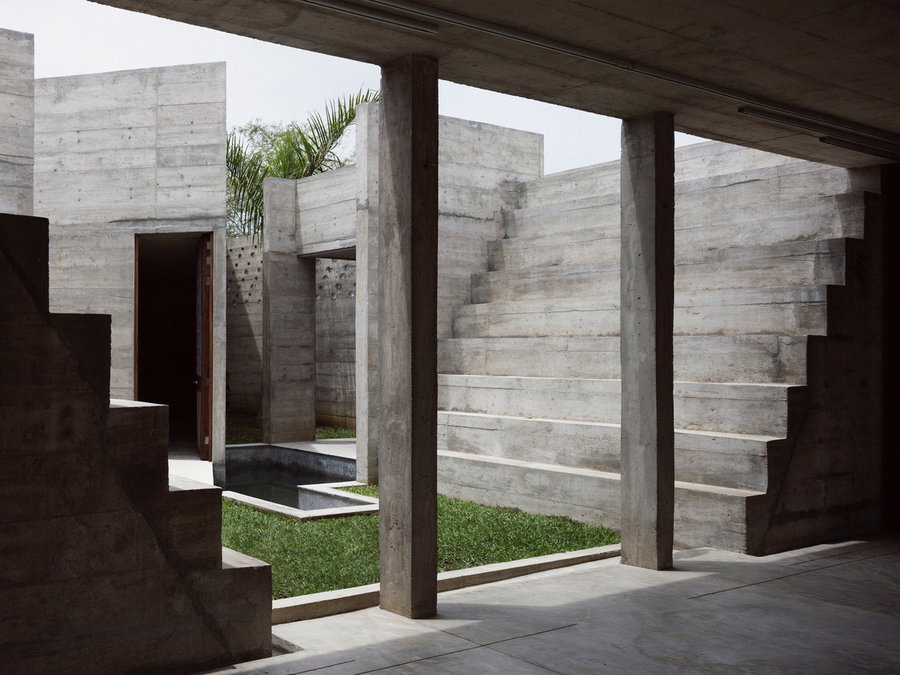 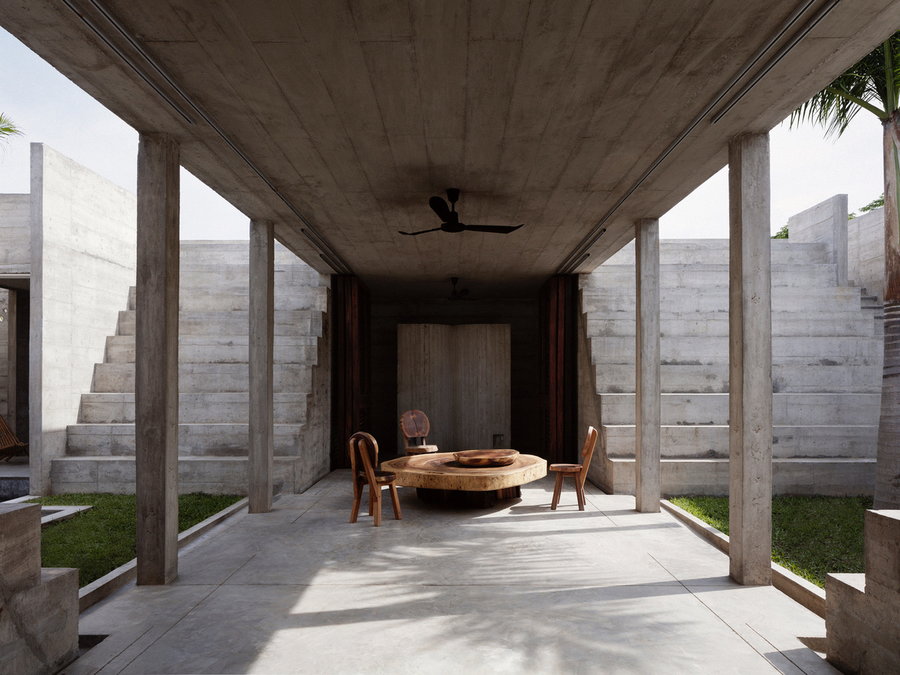 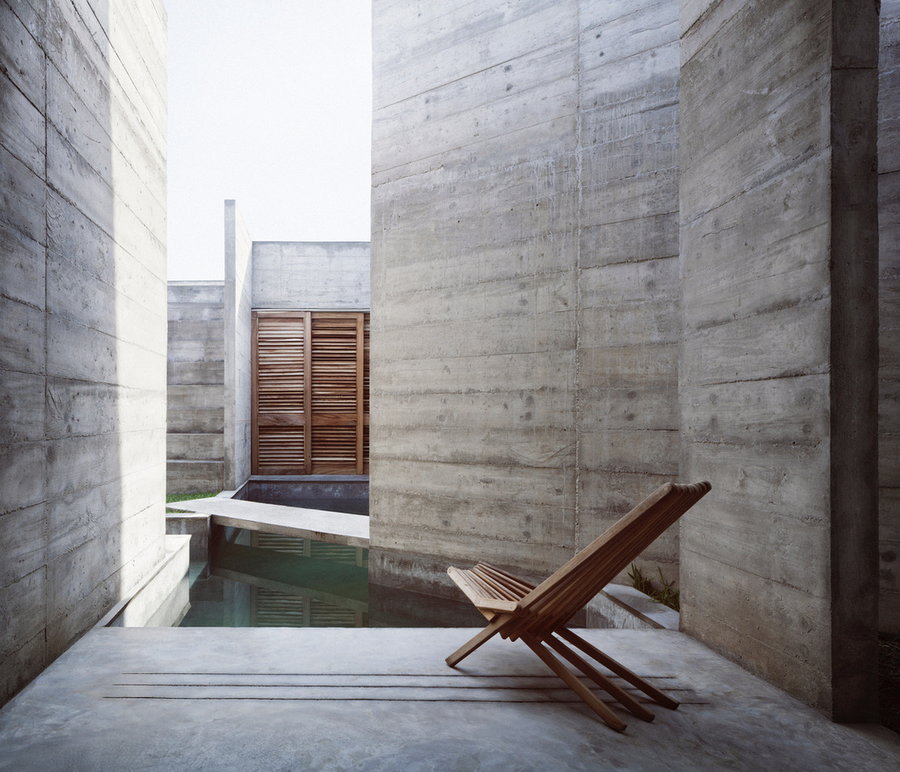 The concrete and simple rectilinear shapes bring in the brutalist element Godefroy and Picault are known for, while the home’s tropical feel comes courtesy of elements like wood, greenery, and a tranquil swimming pool. What’s even more surprising, given the house’s outside appearance, is the fact that there’s no glass to be found anywhere inside. Those large shutters you see all throughout the courtyard can be closed for privacy, but otherwise, the residence is remarkably open to the world at large.

Godefroy adds that “this project has a very interesting personality of being a countryside house next to the sea, instead of a beach house. The house is based on this duality, the duality of its surroundings and its [ability] to respond to the mountains and be protective as a fortress as well as a wide-open space; giving you the feeling [of living] outside in a garden, making the border between in and out disappear.” 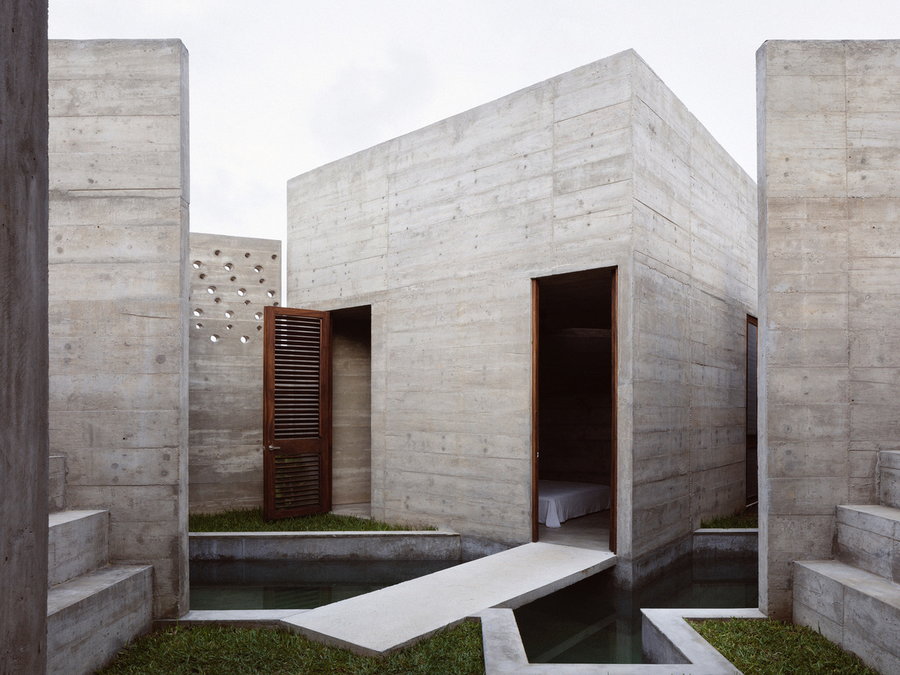 “Zicatela House is built on a small 300-square-meter plot, using a typology of defensive architecture, where a wall surrounds the terrain completely, helping create a 100-percent controlled area on the inside, turning it into an open-sky fortress, with only one main view towards the sky, the only permanent element in time. The house is a bunker on the outside, one of those massive concrete structures I used to see in Normandy — where I was born — protecting a Mexican pyramid on the inside, one of those I see when I travel around Mexico, the country where I’ve been living and working for 10 years now.”