J.R.R Tolkien fanatics are famous for frequenting New Zealand’s North Island, where they can roam the whimsical movie set of Hobbiton and indulge in the magic of Peter Jackson’s adaptation of The Hobbit. Featuring tiny yet beautifully adorned circular doors set in the sides of the area’s rolling green hills, these hobbit houses offer unparalleled photo ops, making guests feel as if they were about to go on an adventure with Bilbo Baggins himself. 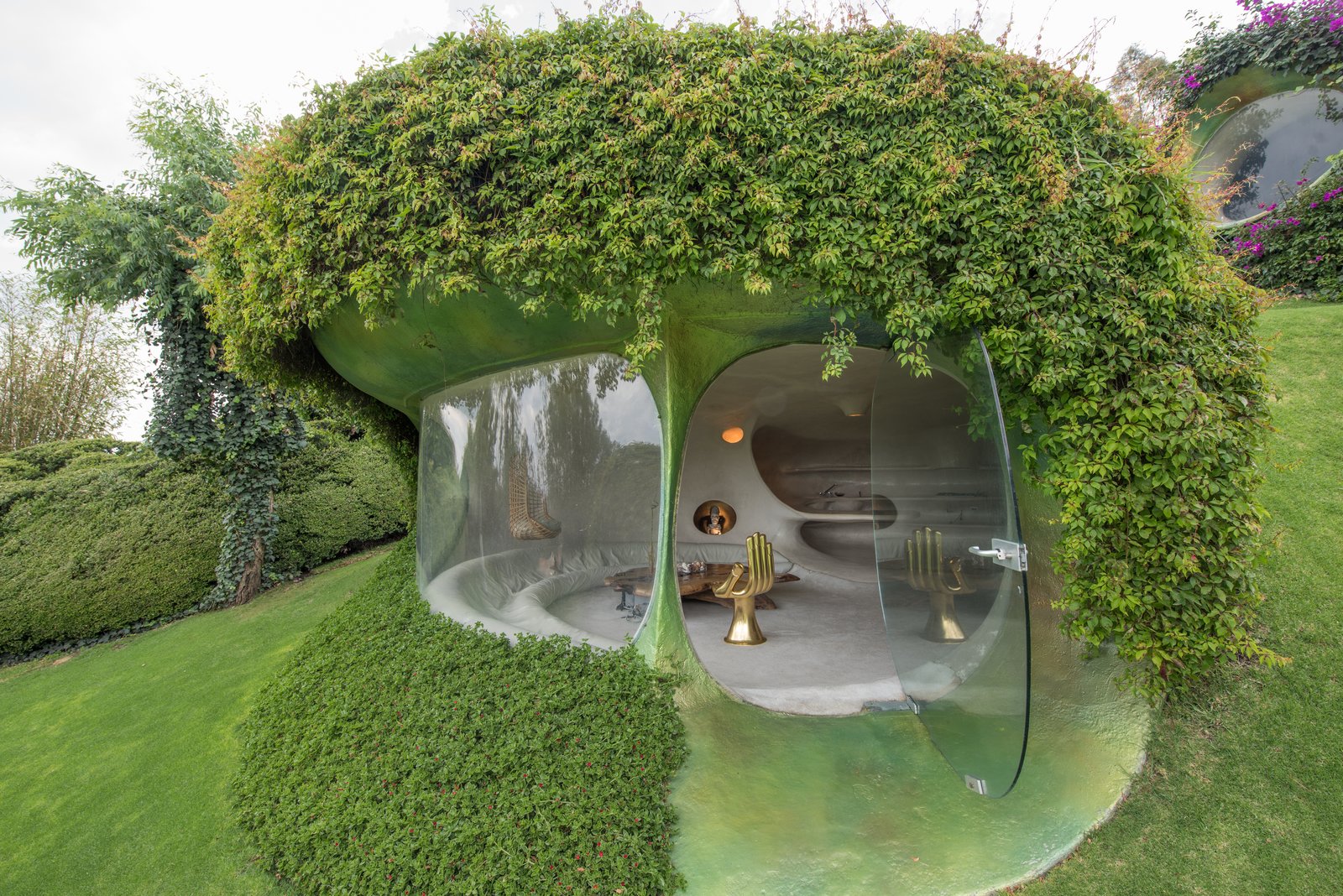 As wondrous as the New Zealand set may be, it’s important to remember that Mexican architect Javier Senosiain brought a piece of Hobbiton to the real world long before Peter Jackson did. Set on a grassy knoll in Mexico City, the visionary devised a home reminiscent of a “hobbit cave,” at first likening it to the shape of a very large peanut. The semi-submerged 1,873-square-foot structure was originally completed in 1984 — a time when designs like this would have been seen as particularly unusual. But this design was quite good at going unnoticed, mostly because Senosiain made it a point to seamlessly blend it into the surrounding natural landscape. 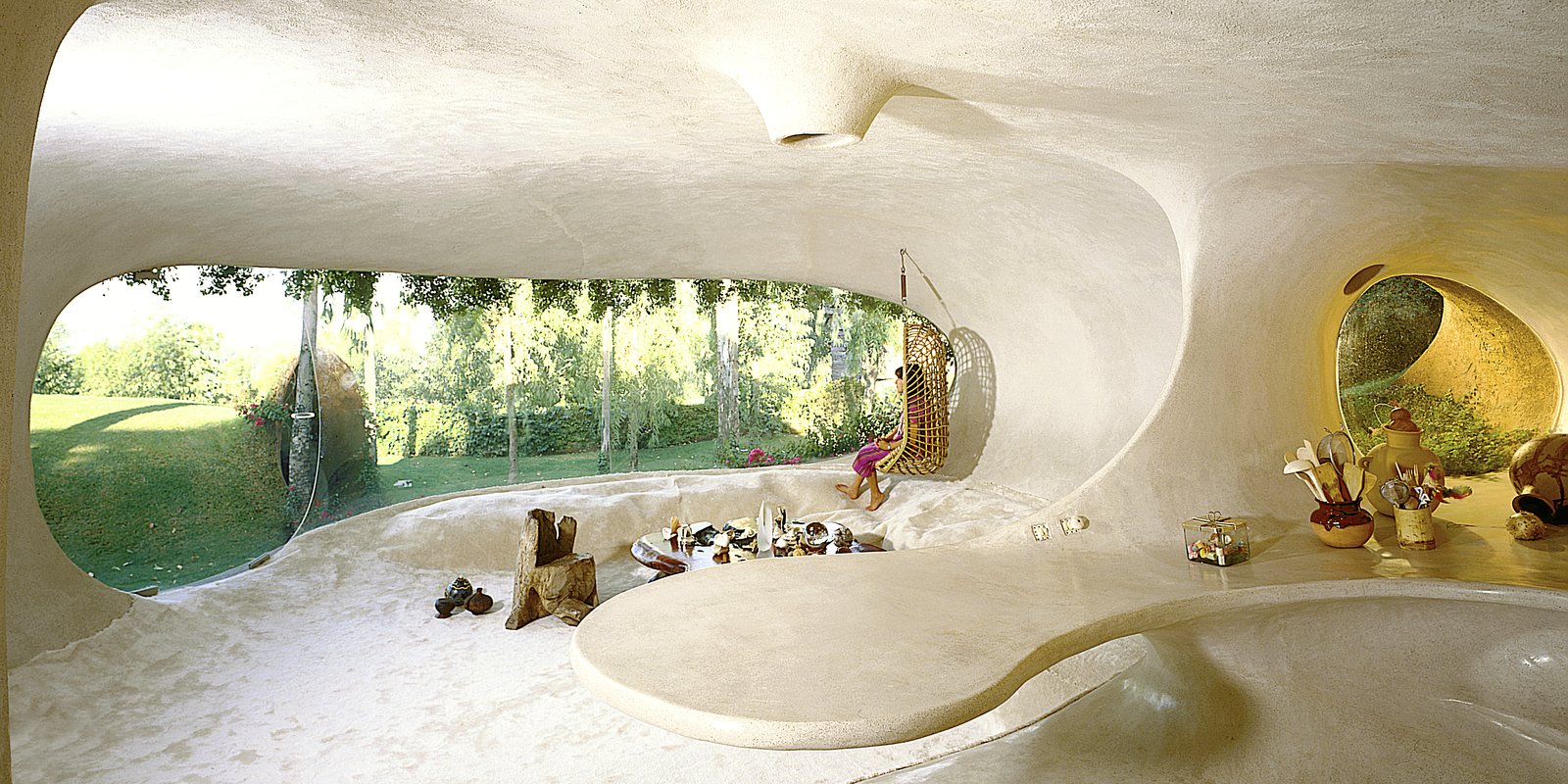 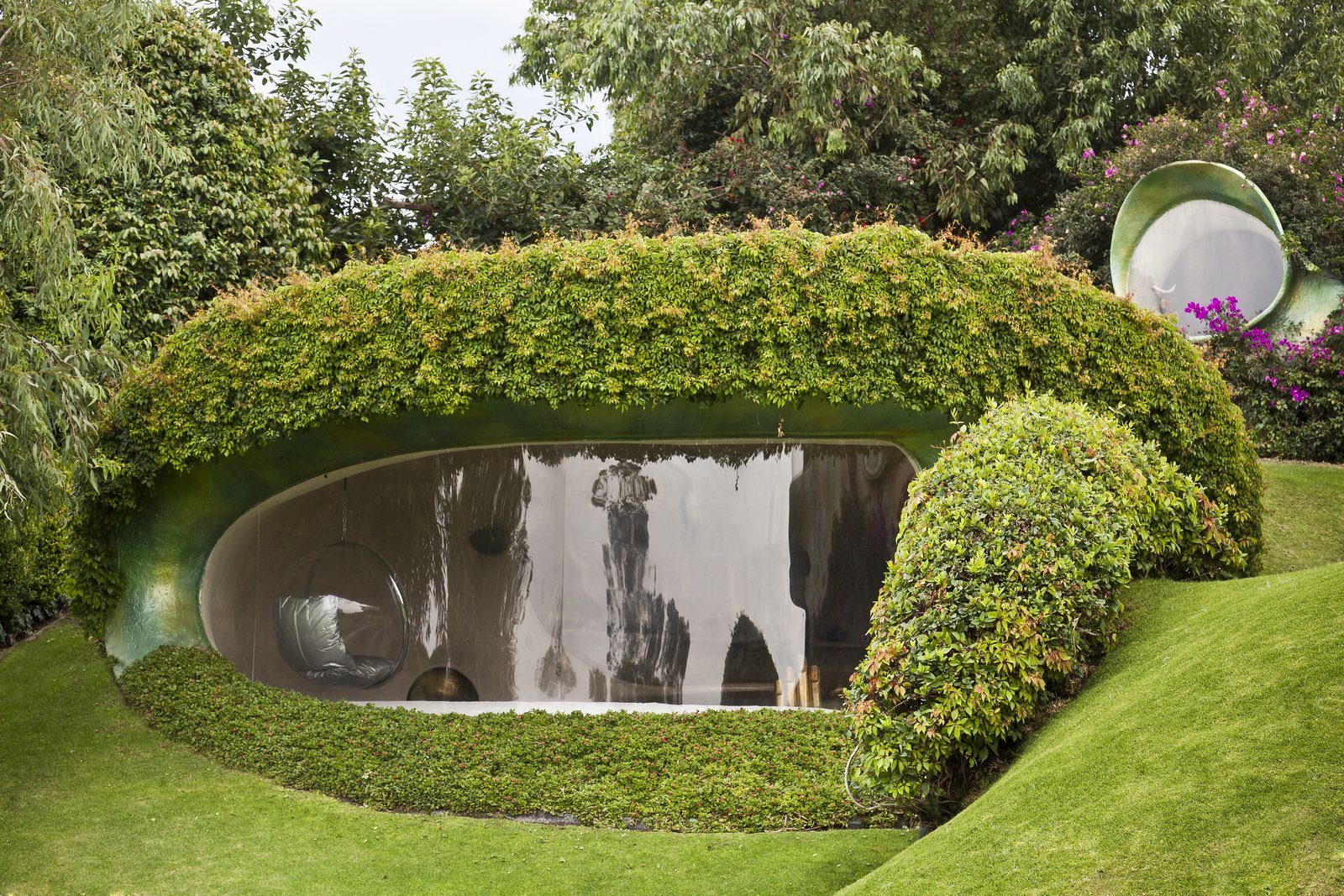 At first glance, “Organic House” seems like it has always been a part of the plant life around it, twisting in ways that mimic the shapes of the neighboring hills and coated with foliage and flowers. If you’re walking in the garden, you might just end up obliviously tramping across what is in fact the roof! Inside, two sleek ovoid spaces connected by a narrow passage house a dining room, living area, kitchen, bedroom, and even a couple smaller social areas. 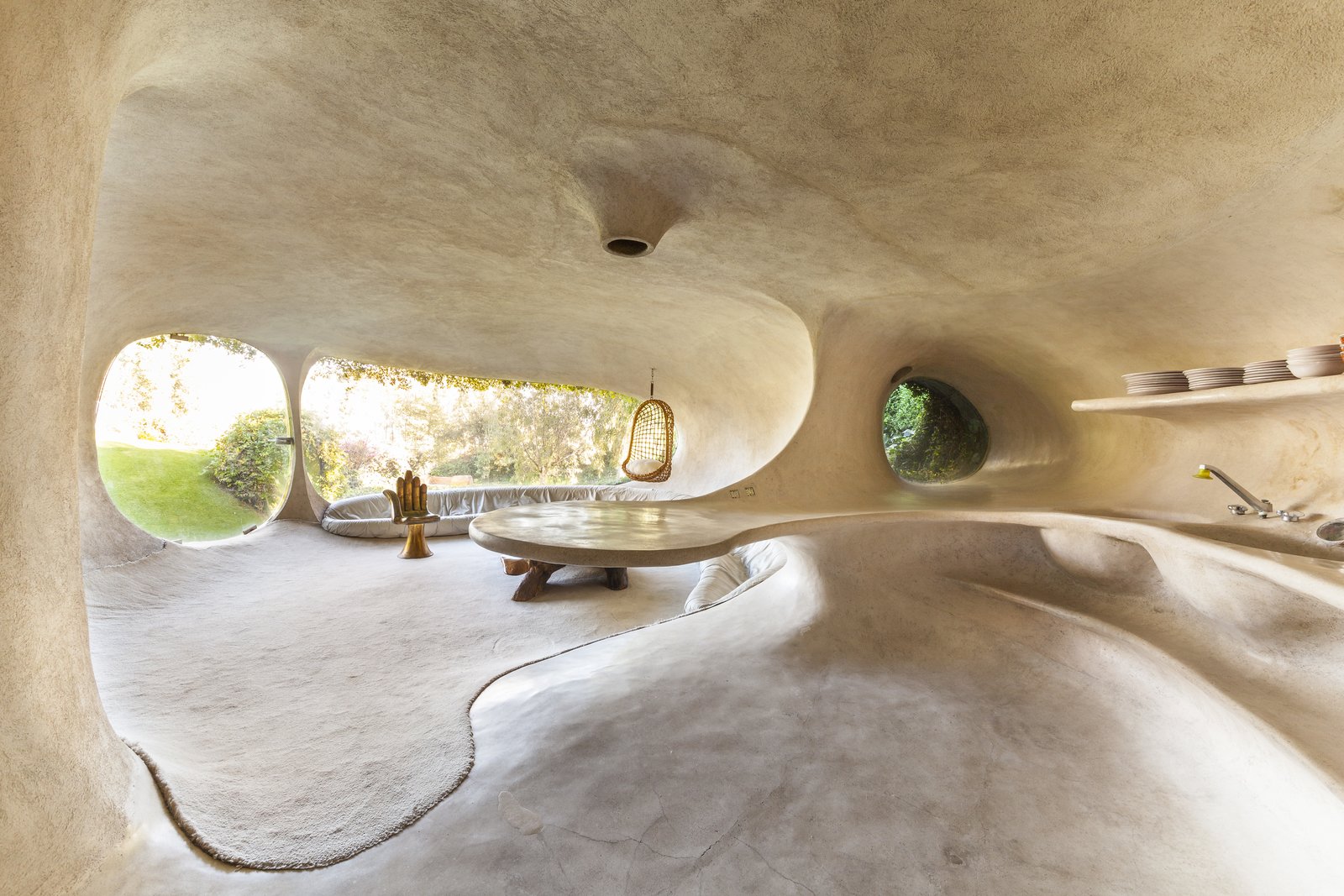 The hobbit house is not the only building that the freeform architect has designed with an inanimate likeness to a worldly object or animal. Senosiain has also built houses resembling a mushroom, a snake, a shell, a shark, and a flower in the past. All of his designs reflect two concepts that he believes fundamental to a person’s well-being: a place to call home and a place to demonstrate fellowship with others. Recognizing the importance of these conditions, he often lets them influence his design decisions. For example, the Organic House’s greenery builds natural barriers around it in order to filter out harsh sunlight and keep the interiors at a cool, comfortable temperature. The surrounding foliage also helps to expel noise pollution and protect the house from the elements.

The home’s open plan design facilitates free air circulation, just as you would expect to find in a large cave. The sleeping “nooks” are located at the end of a narrow tunnel that leads on from the first oval shaped chamber, where the living and dining areas are situated. And although you’d probably also expect this hobbit-like-hole to be shrouded in a half-buried darkness, the dwelling lets in a lot more light than most conventional homes due to its large, oddly placed windows and domed ceilings. 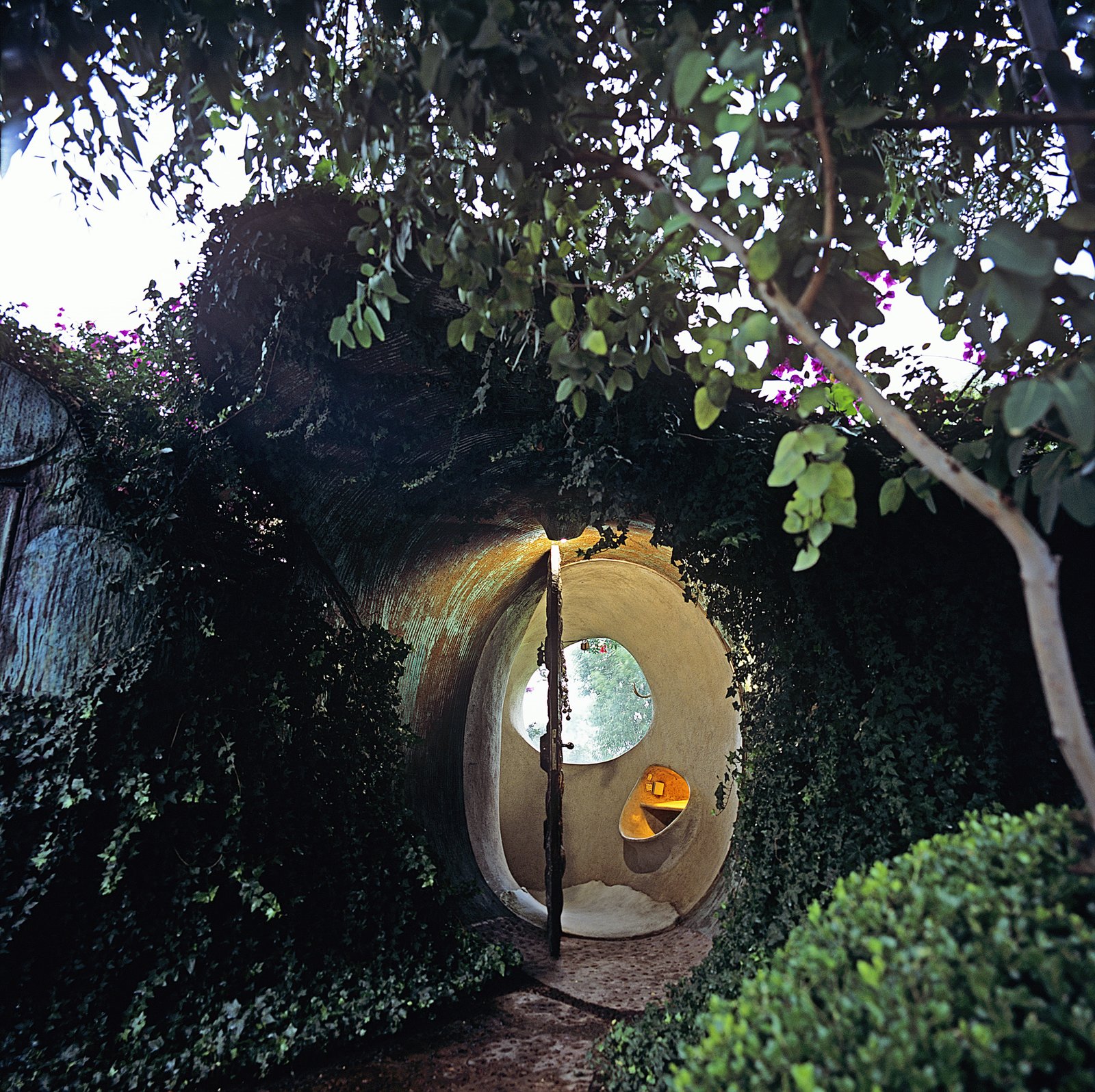 At the end of the day,  Javier Senosiain is just another architect living in our modern civilization — but his imagination and talent are unquestionably from another realm.