Ever a visual buffet of creativity and excess, the annual Met Gala certainly didn’t fail to live up to its reputation this year. Huge stars, outlandish costumes, and political statements abounded, all nebulously organized around the theme “American Independence” for the Costume Institute’s newest exhibition, “In America: A Lexicon of Fashion.” Postponed from its usual date in May to September 13th due to COVID, fashion’s biggest night produced some of the most dramatic looks yet, and we aren’t done marveling and muttering about them. Here are 12 of the greatest, weirdest, and most WTF looks that marched up the stairs to the Metropolitan Museum of Art in New York City in 2021. 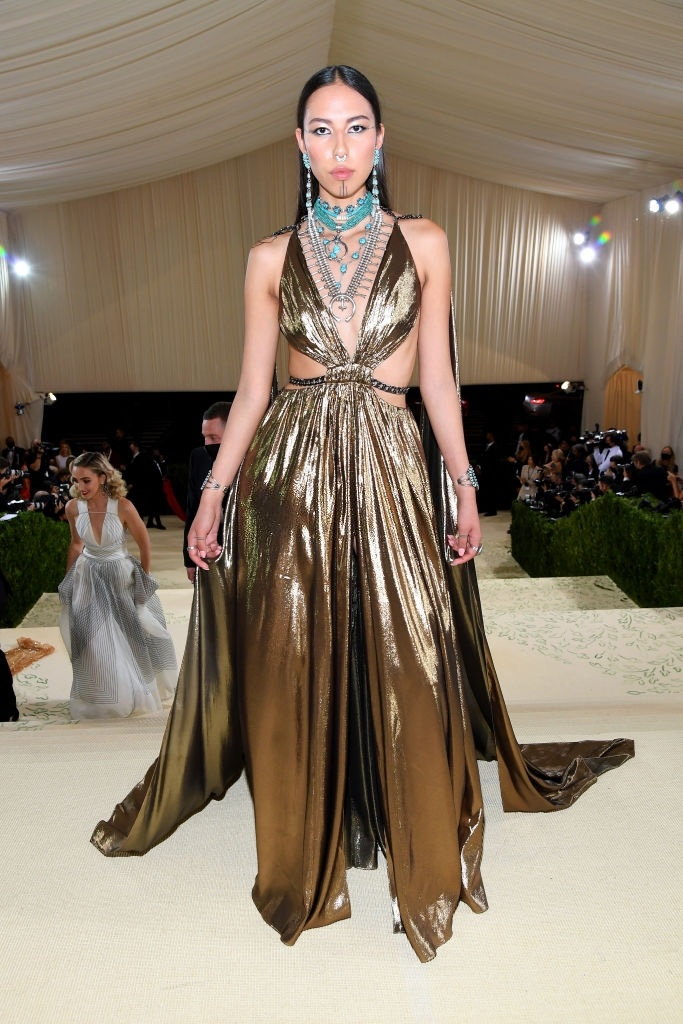 Best statement of the night arguably goes to 19-year-old Indigenous model and activist Quannah Chasinghorse, who wore a stunning gold cut-out gown by Peter Dundas for Revolve along with traditional turquoise jewelry borrowed from her aunt Jocelyn Billy-Upshaw, former Miss Navajo Nation. On Instagram, Chasinghorse wrote, “I did not celebrate American independence (nor will I ever), I celebrated my Indigenous bloodlines coursing through my veins… and sacred to my heart because over and over again my people fought genocide and WE ARE STILL HERE.” 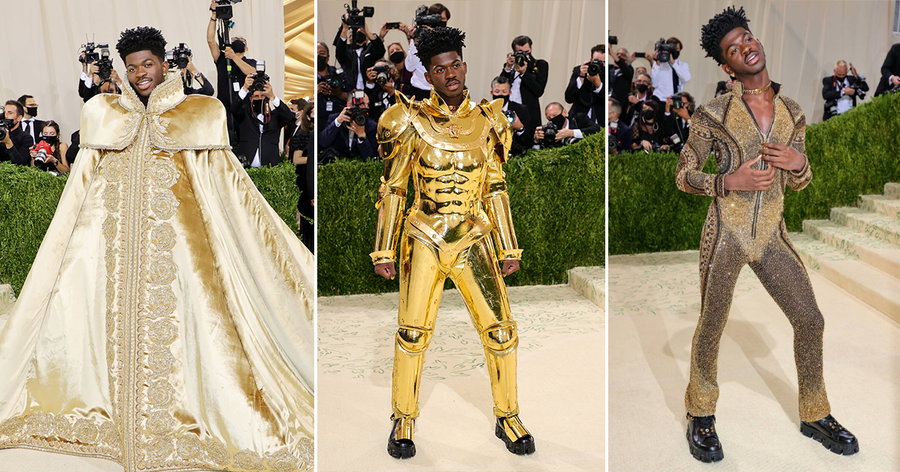 Provocateur Lil Nas X deserves recognition not just for looking amazing, but for the sheer number of costumes he presented on a single red carpet, all designed by Donatella Versace. He first shrugged off an ornate royal-looking cape covered in intricate gold beading to reveal a gold suit of armor, then shed that layer like an exoskeleton for a final look in a stretchy shimmering bodysuit. It was the rapper’s first Met Gala appearance, and certainly one to remember. 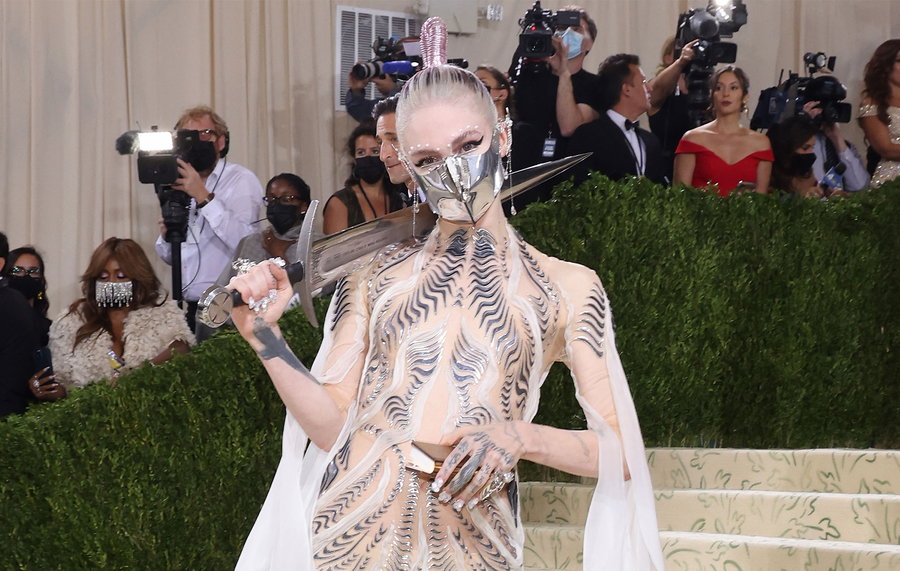 Looking like an alien forest spirit is kind of Grimes’ everyday thing, but designer Iris Van Herpen brought out her inner futuristic warrior with this intricate ensemble. The custom look, made from liquid silicone hand-casted into a “mirror finished laser-cut labyrinth,” was inspired by the Bene Gesserit cult in the classic sci-fi novel Dune by Frank Herbert (which has a new film adaptation staring Timothée Chalamet debuting this year). Van Herpen is known for her signature blend of technology and haute couture, incorporating 3D printing, electromagnetic weaving, and other visionary techniques and materials into her work. Also looking otherworldly fabulous in Iris Van Herpen at the Gala were Gabrielle Union, Tessa Thompson, Winnie Harlow, Valentina Sampaio, and Hailee Steinfeld. 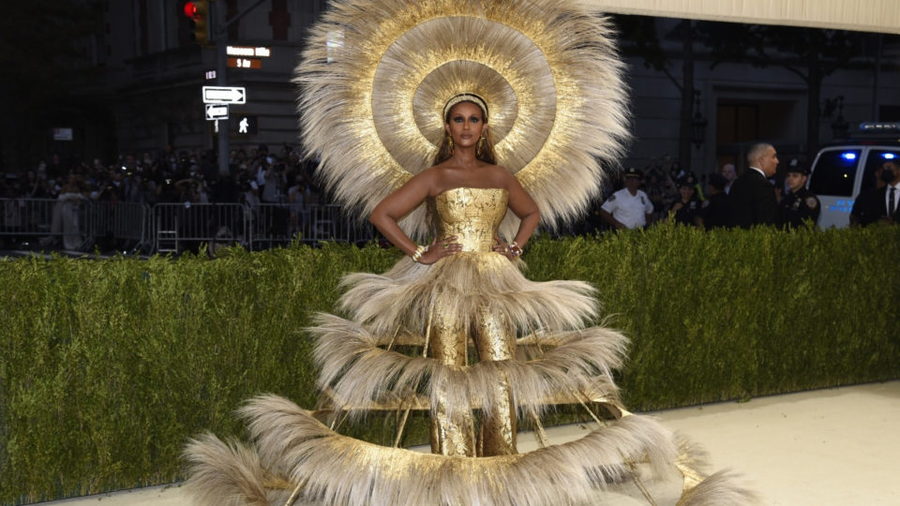 Did anyone look more breathtaking than Iman this year? The answer to that question is obviously no. Dreamed up by the young queer up-and-coming designer Harris Reed, the jaw-dropping feathery gown and headdress feature crinoline, gold leaf, and jacquard in a sunburst motif that’s impossible to ignore. 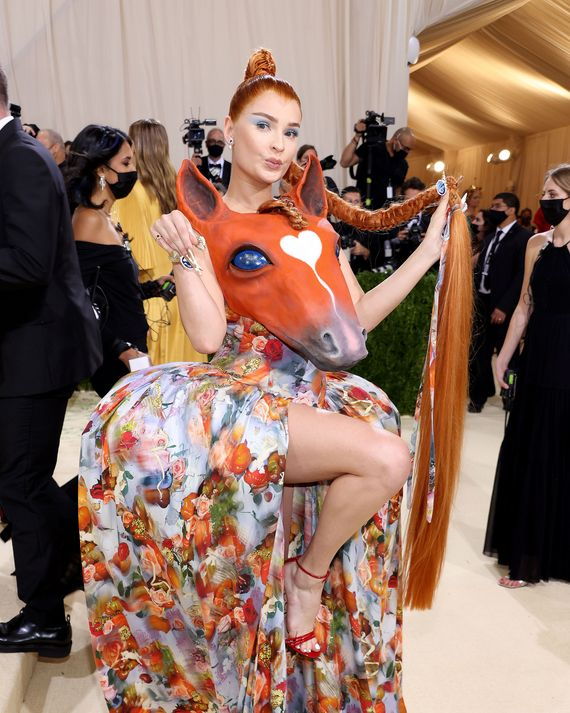 On the more surreal side of the spectrum is this getup worn by German-born, LA-based singer Kim Petras. Her Collina Strada dress, designed by Hillary Taymour, pays tribute to “horse girls” with a giant 3D bust of a horse jutting out of the bodice and a voluminous skirt covered in images of roses and tomatoes. Taylor also appeared in a horsey outfit of her own. 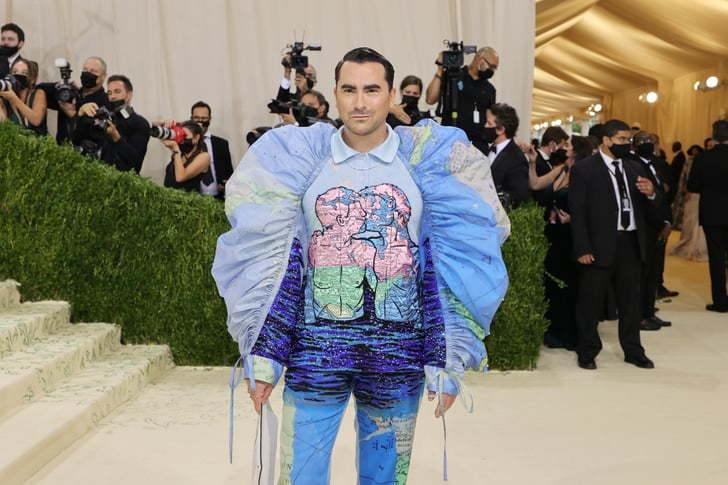 Schitt’s Creek star and co-creator Dan Levy made a touching statement with his custom-designed outfit by Spanish fashion house Loewe, featuring an appliqué of two men kissing on the front. Accented by voluminous sleeves and map print, the look celebrates an image by artist David Wojnarovicz, who died of an AIDS-related illness in 1992. “We wanted to celebrate queer love and visibility – acknowledging how hard artists like Wojnarovicz had to fight, while also presenting the imagery in a way that offered a hopeful message,” Levy wrote on Instagram. 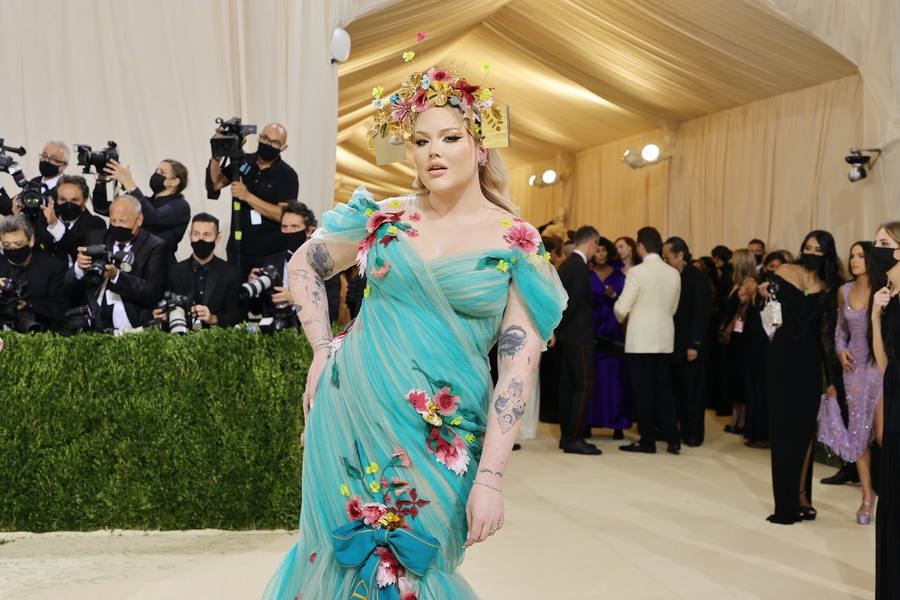 The makeup artist and YouTube personality best known as Nikkie Tutorials also came out for LGBTQIA+ visibility with her floral headdress and gorgeous gown by Edwin Oudshoorn Couture. The look is a tribute to Marsha P. Johnson, the Black transgender activist best known for her role in the 1969 Stonewall uprising. The sash reads “Pay it no mind,” which was Johnson’s response to people who questioned her gender. 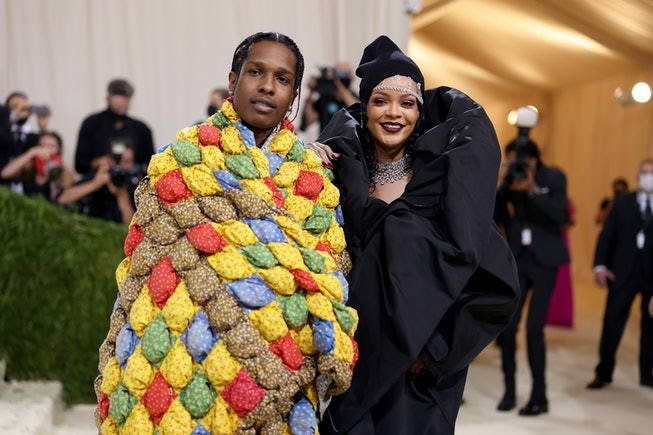 Rihanna is always one to watch at the Gala, and for her seventh year in attendance, she didn’t disappoint. Showing up dead last along with her boyfriend ASAP Rocky, who wore a quilt-inspired look by ERL, Rihanna went with all black everything (but the diamonds). Styled by Demna Gvasalia, her overcoat is by Balenciaga, hat by Stephen Jones Millinery, and jewels by Bulgaria and Thelma West Diamonds 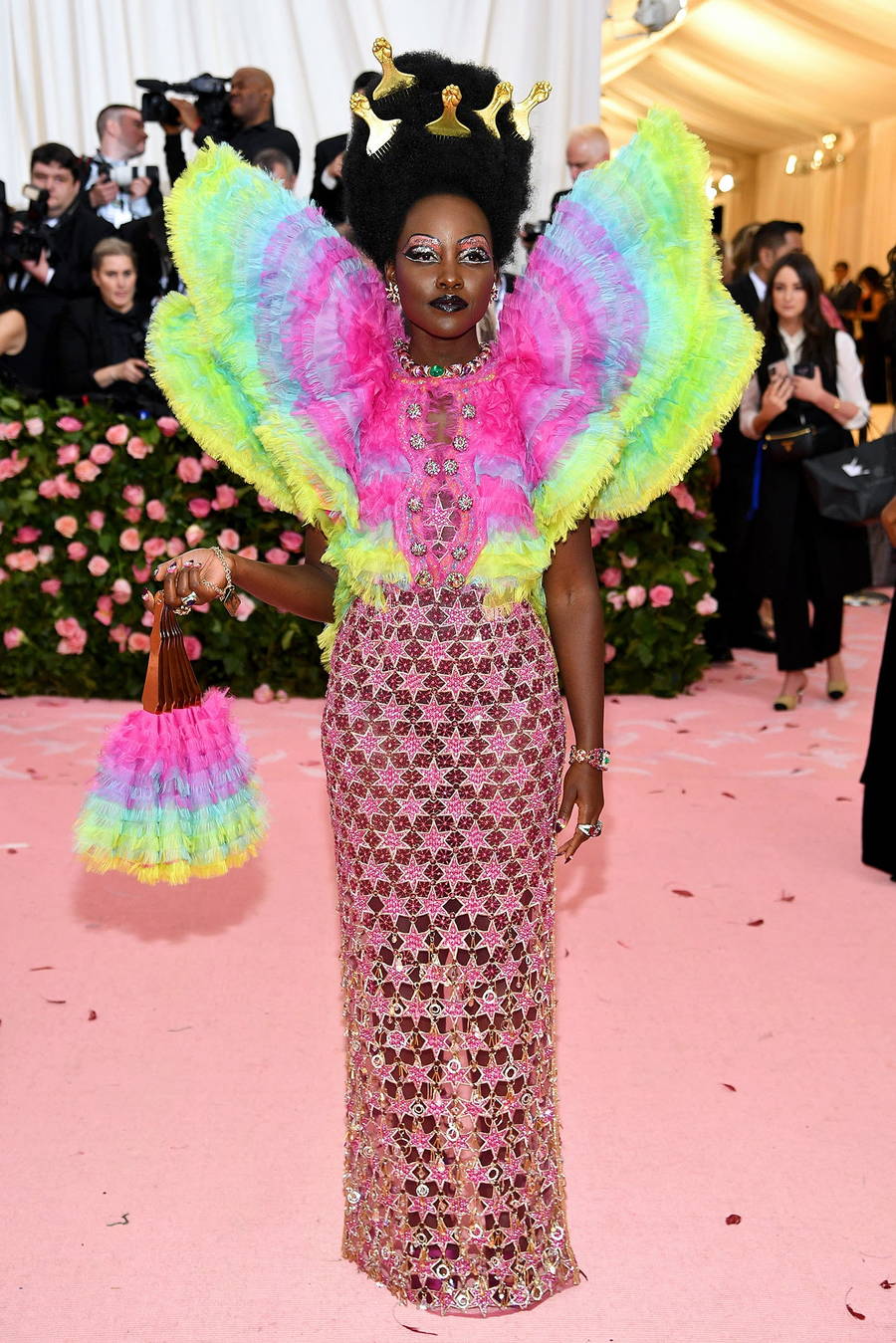 Lupita Nyong’o nailed the theme better than just about anyone in her denim gown by Versace. Attempts to elevate denim to haute couture can come across a little cheesy, but this stunning silhouette pulls it off nicely. 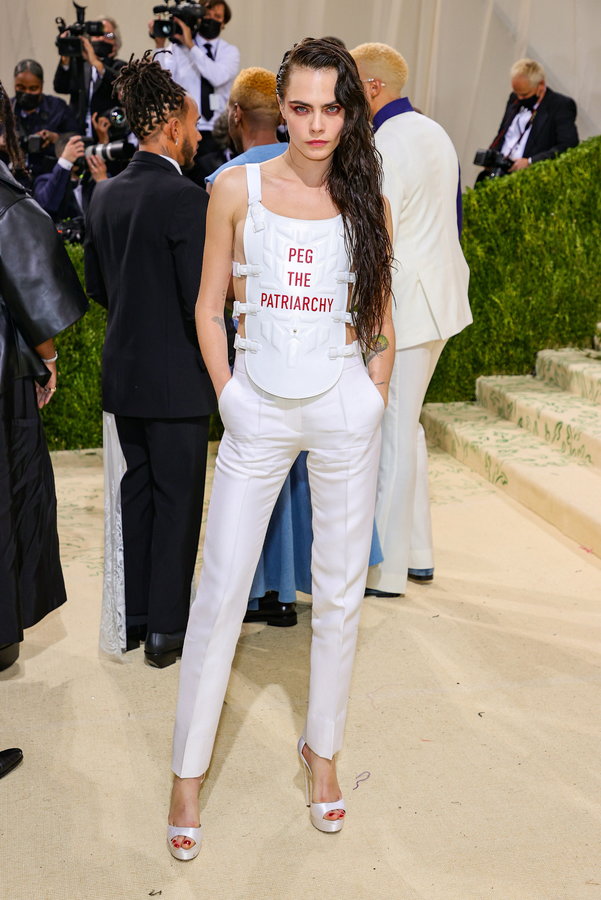 Model and actor Cara Delevingne showed up in a chic all-white ensemble consisting of a vest, cigarette trousers, and peep-toe heels. But controversially emblazoned across the front of the vest is the message “peg the patriarchy,” an attempt at conveying “women’s empowerment” and “gender equality,” as Delevingne told Vogue on the scene. If you don’t know what pegging means, have a Google. Suffice it to say the message comes across to many as less than sex positive, and hints that being in the receiving position of this sex act is demeaning, which can be construed as homophobic. The uncredited slogan was coined by black queer sex educator Luna Matatas, who says she means it in a metaphorical sense to denote the subversion of a gendered power dynamic. 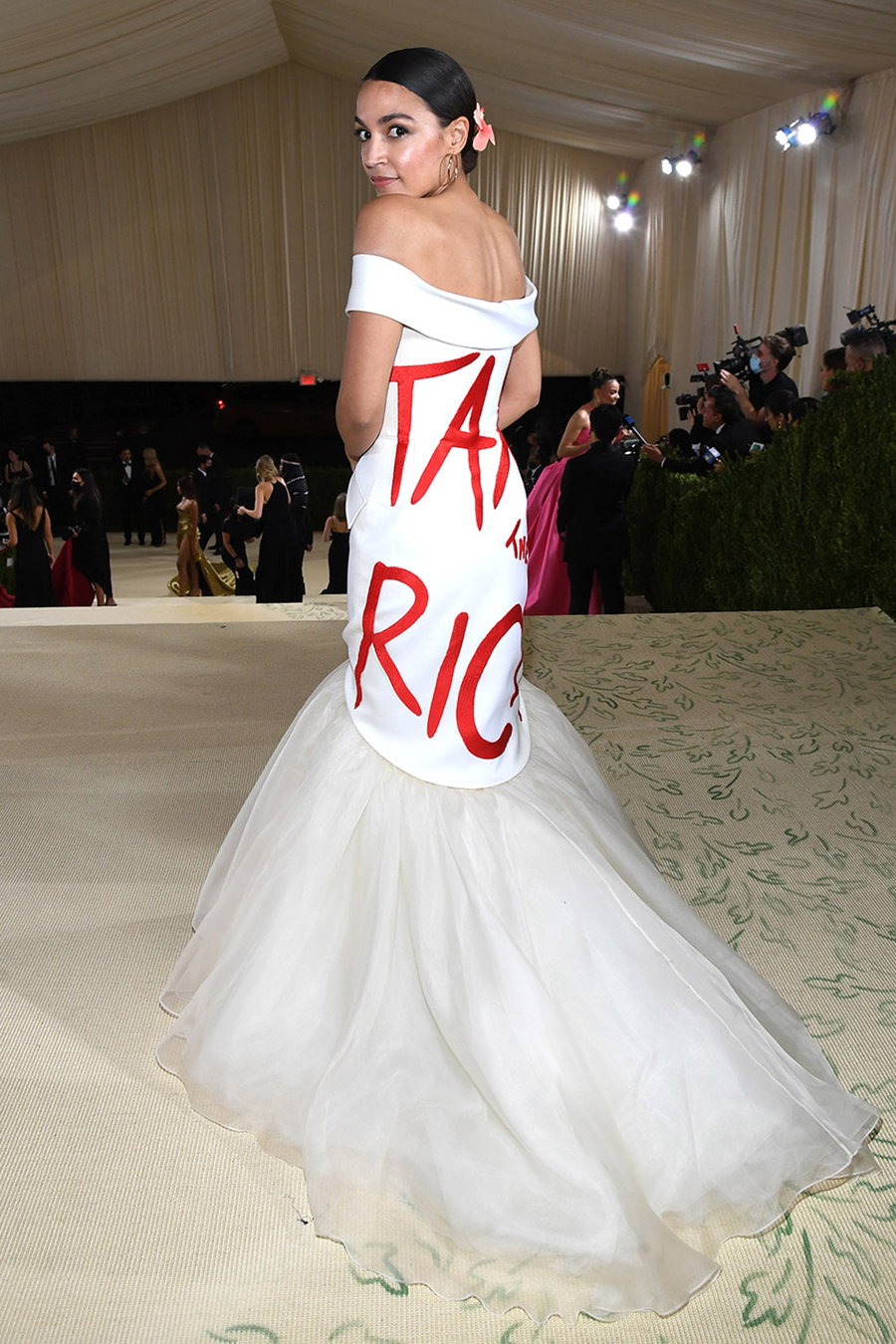 You gotta hand it to U.S. Representative Alexandria Ocasio Cortez for showing up to an event full of uber-rich elites in a gown that says “Tax the Rich.” Probably the most polarizing look of all, the gown by Black designer Aurora James brought one of AOC’s favorite political causes to the doorstep of some of the world’s wealthiest people. Some critics called her a hypocrite for attending the event at all, though she reportedly didn’t pay for her $35,000 ticket and New York City elected officials are often invited (AOC was one among several this year). It’s also notable that Google searches for the phrase “tax the rich” surged after the Gala, too, which was kind of the whole point.