AI-generated art has advanced so much recently, it’s winning first prize in fine arts competitions meant for human artists. Programs like DALL-E and Midjourney make it possible to produce surprisingly beautiful, nuanced works of art just by entering text-based prompts. This development is stirring up a lot of controversy and ethical concerns, and rightfully so. 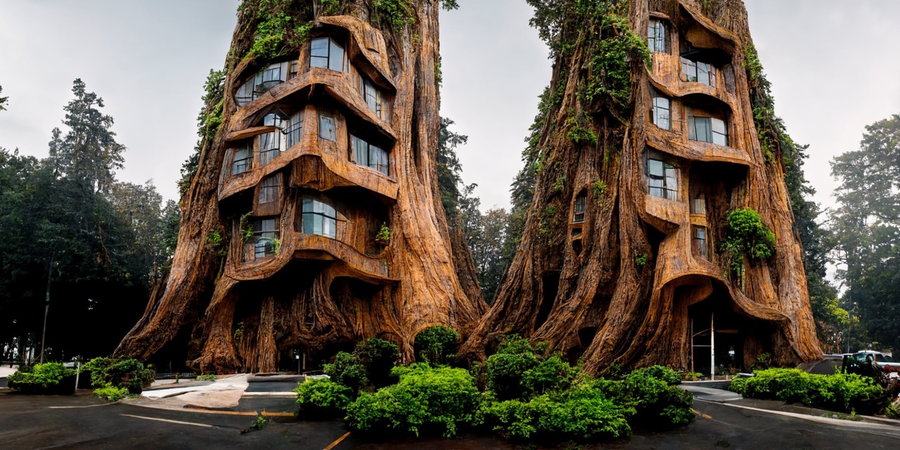 When machines can produce stunning masterpieces that mimic a human’s signature style, that artist’s work can suddenly seem less valuable. But a recent project by Manas Bhatia shows us one way in which artificial intelligence could enhance our creativity instead of replacing it. Envisioning what organic architecture of the future could look like, “Symbiotic Architecture” breaks through our understanding of what’s actually possible and asks us to think about our built environment a little differently. 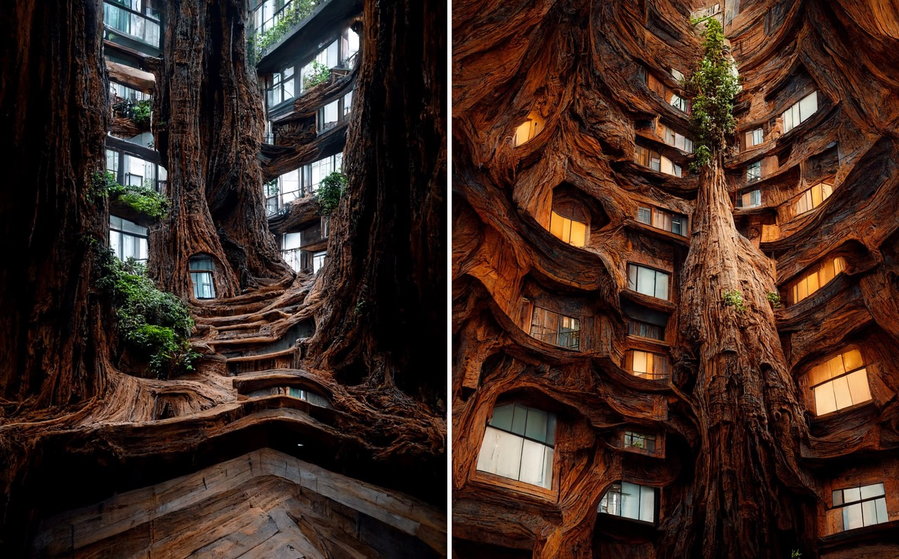 Bhatia, an architectural designer based in India, uses the AI art generator Midjourney as a tool to overcome his own conscious and subconscious assumptions. He’s particularly interested in finding sustainable solutions that are able to withstand climate change by acting more like natural structures than artificial environments. For Symbiotic Architecture, he asked the program to combine an apartment building with Hyperion, a towering 380-foot redwood in California that’s considered the world’s tallest-known living tree. He entered combinations of words like “giant,” “hollowed,” “tree,” “stairs,” and “facade,” continuing to alter the prompts until he got the results he wanted. 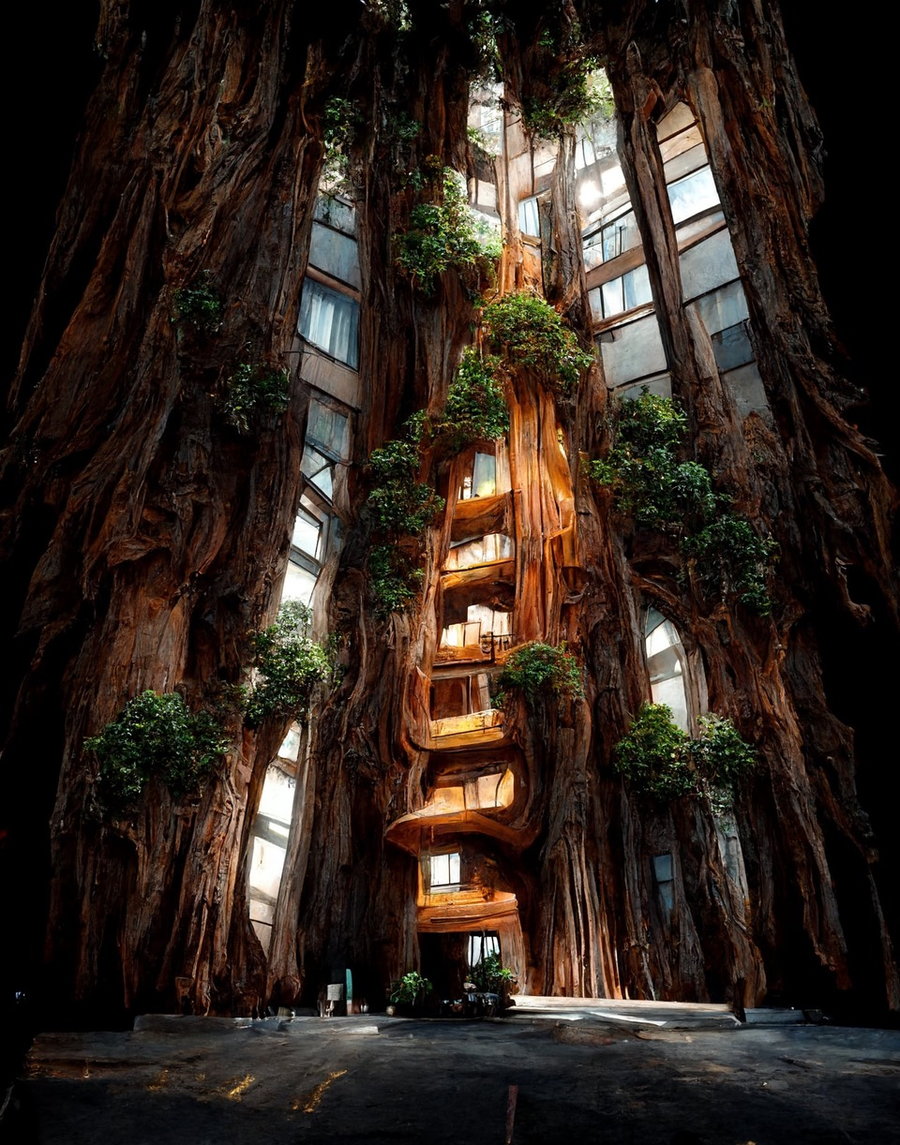 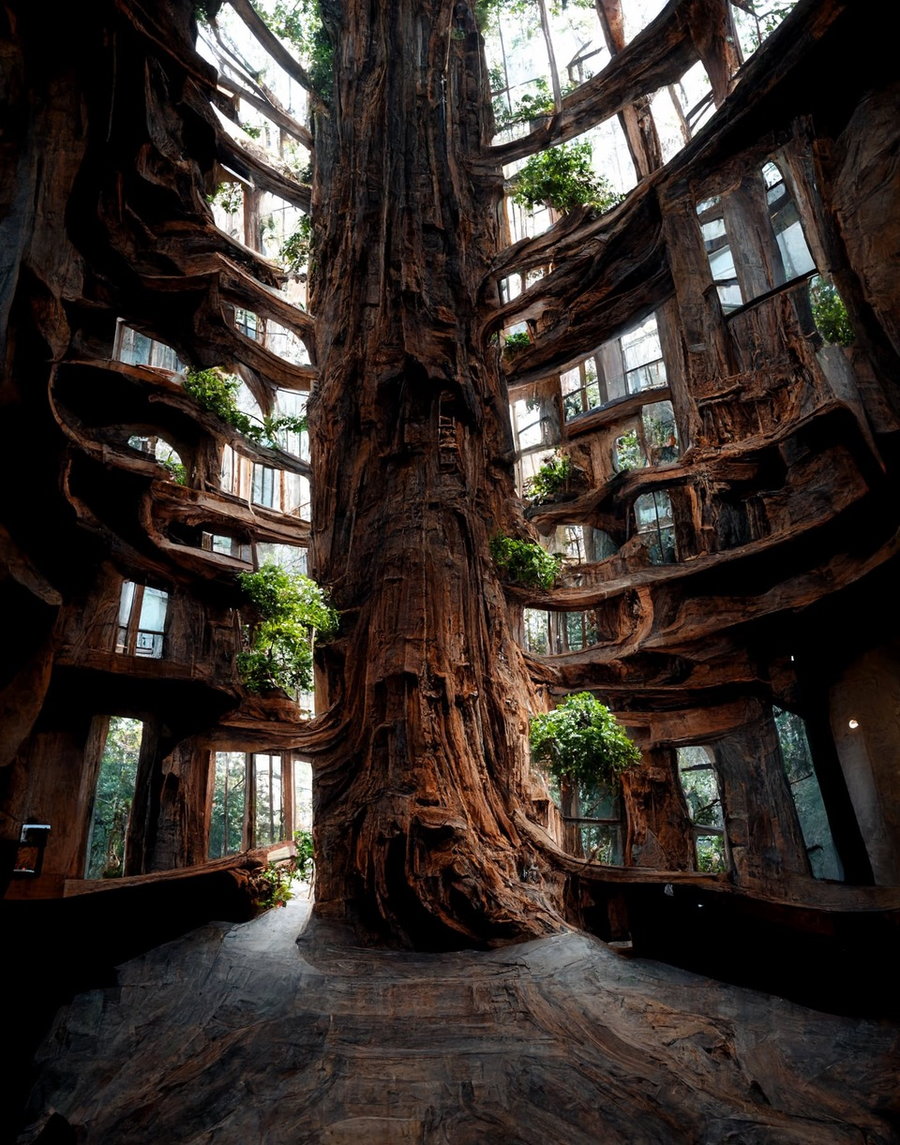 The final digital works of art produced by the program are nothing less than stunning, even if they seem completely impossible in the real world. Massive coastal redwoods the size of Hyperion and even larger are pierced with glass-clad dwelling units stacked on top of each other. Little sprouts of leaves pop up here and there between windows and balconies. The images give us an idea of what the world might look like if human dwellings were more like those of ants and other creatures that build their homes from the world around them. The idea is that the structures we live in breathe and potentially even grow as a part of nature instead of attempting to be separate from it. 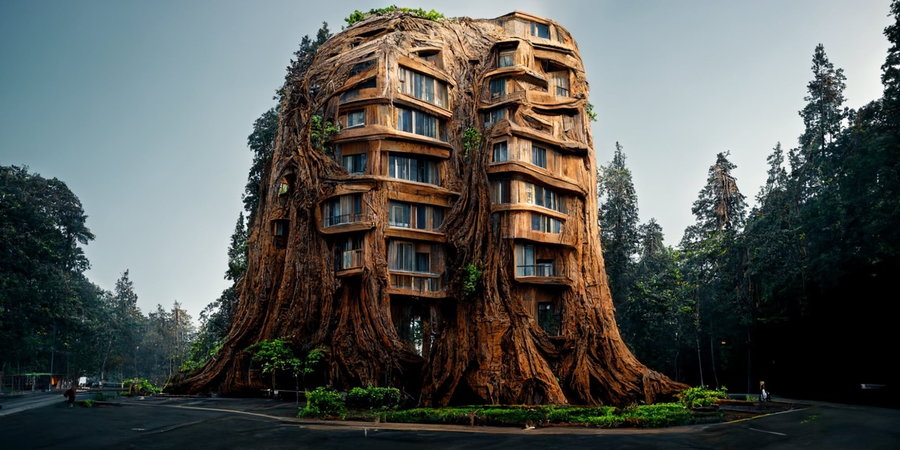 Would we really want to insert architecture into existing groves of sensitive, slow-growing, and endangered redwoods? Definitely not, but that’s not really the point. Just because our existing construction methods, materials, and technologies aren’t capable of producing safe and durable buildings that look like this doesn’t mean we can’t develop new ones that can. Working backwards from fantastical ideas could produce amazing innovations that allow us to burst out of our minimalist architectural stagnancy. For instance, it’s not that hard to imagine something like a naturally reproducing fungus-based material growing to a desired shape and size around a framework of modular living pods with an appearance resembling these giant inhabitable trees. 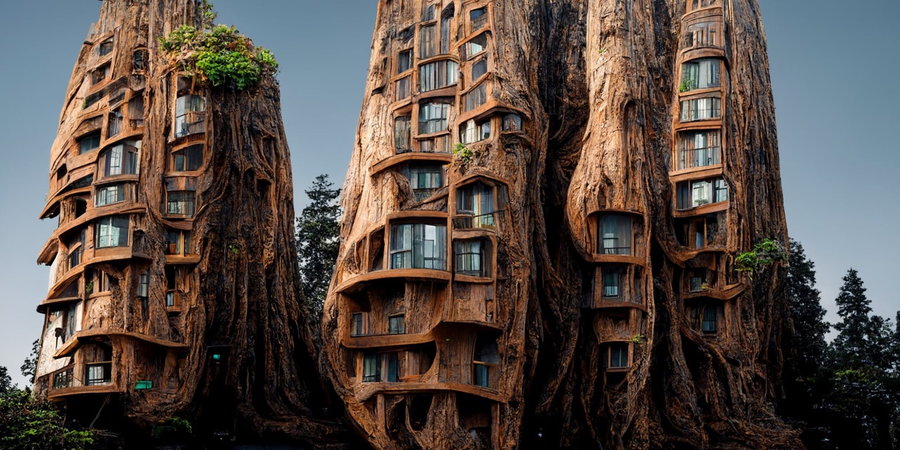 “The project began as an AI-based investigation into the interactions we have all had with nature, such as appreciating a tree’s shade on a hot day, reading a newspaper in a courtyard under a tree, or simply hanging out in a park to take in the changing hues of the leaves,” Bhatia explains. “Building on these observations came the idea of a ‘utopian future’ in which buildings are not machines made of steel or concrete…Instead, the structure is alive and has the ability to grow and breathe.”