If hobbits suddenly became fans of slightly futuristic contemporary design, Hobbiton might look a little bit like this wild mostly-subterranean home in Russia. Designed by a firm called Niko Architect, “House in the Landscape” looks like it’s located in some picturesque rural area, but it’s really set on a relatively limited urban plot in the Chekhov district of Moscow. 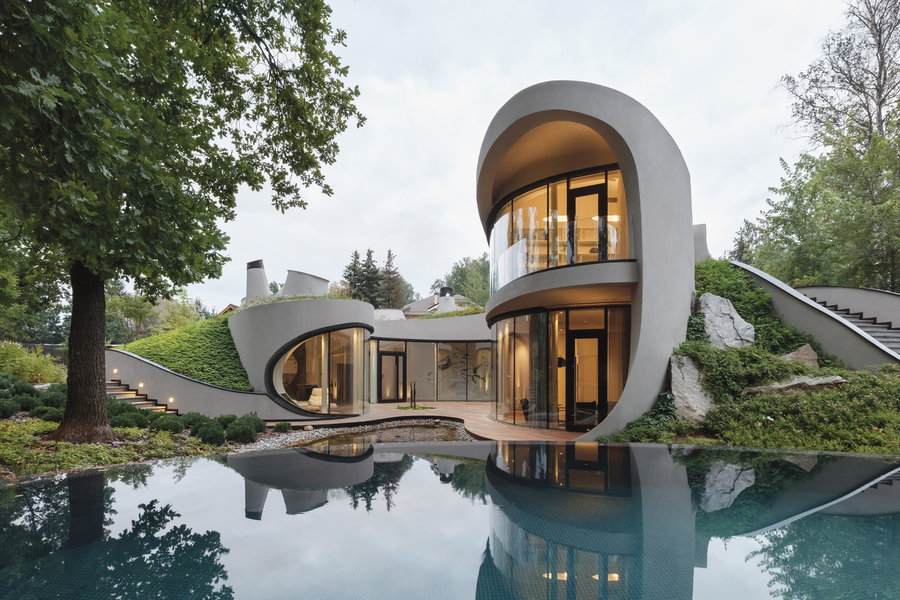 Made primarily of monolithic reinforced concrete, the 300-square-meter (3,229 square foot) home has a fanciful organic design that would somehow be at home in the universes of both The Lord of the Rings and Star Wars. It rises from the landscape like a natural hill punctured by rounded skylights and chimneys, with a double-height glass facade facing both a reflecting pool and swimming pool outside.

Niko Architect set out to create a balance reflective of a living organism, one that rejects the idea of architecture and nature existing independently of each other. In fact, they argue that futuristic architecture is “a natural extension of nature.” The different functional zones of the house are separate enough to provide privacy and a sense of calm and quiet, but connected enough to make up a single whole, including the outdoor areas. 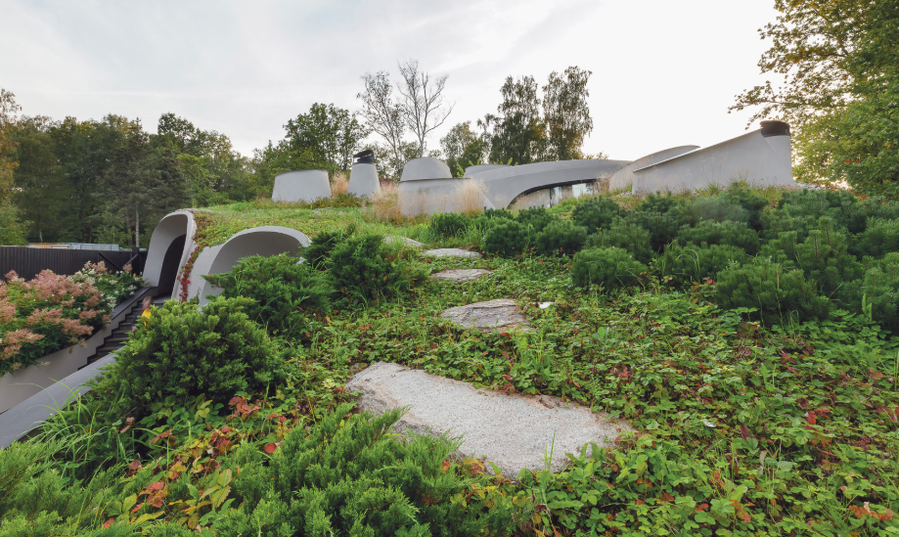 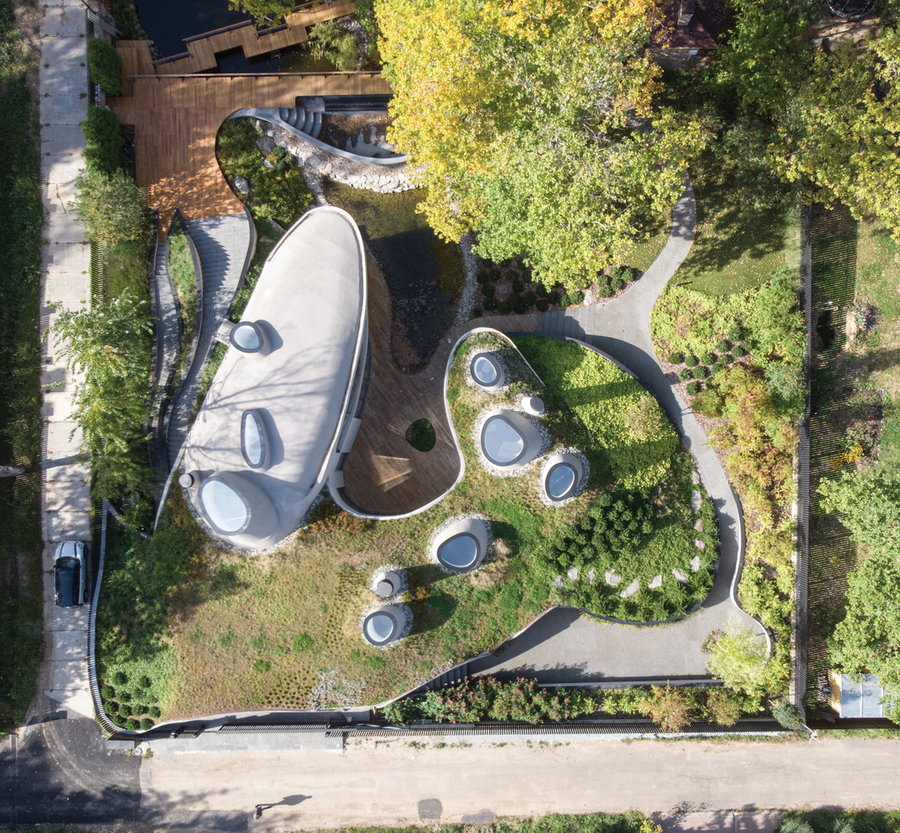 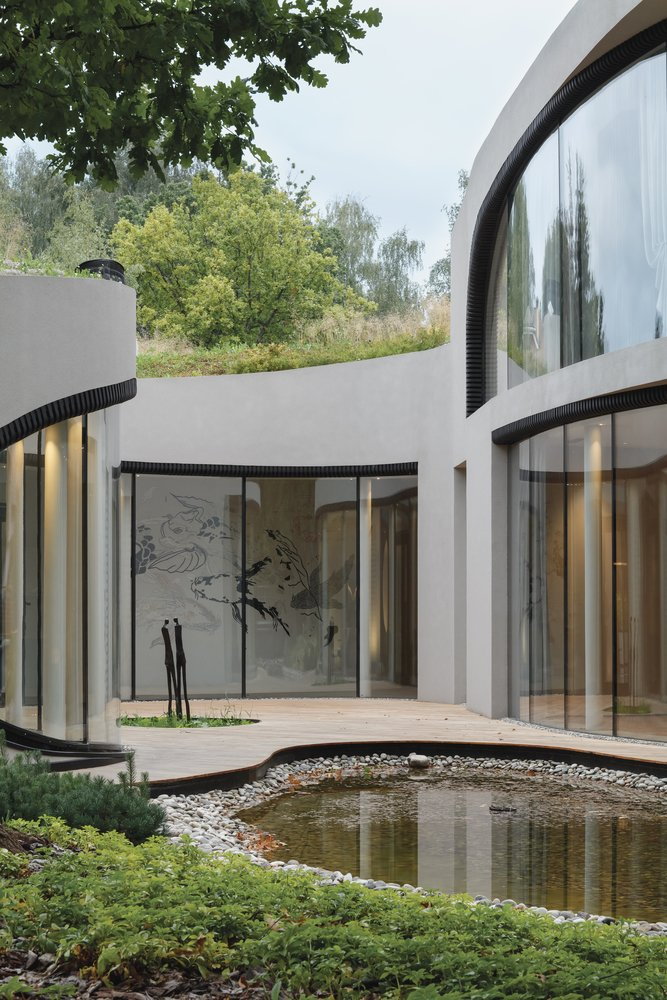 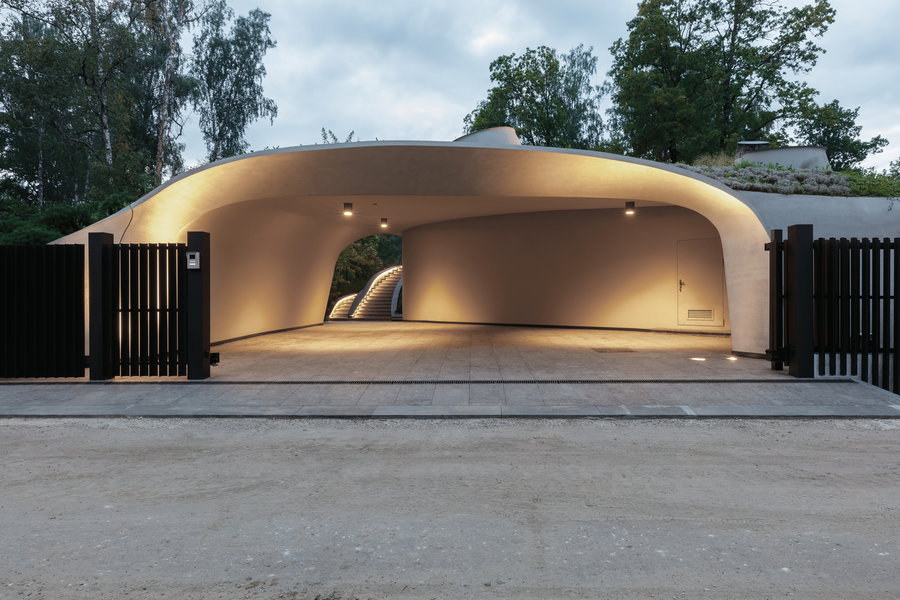 Instead of being bound to conventional ideas of how homes should be shaped, they decided to allow the composition of the project to develop freely according to what felt harmonious. But one of the major considerations was designing the property so it could have that feeling of being in a remote natural place without sacrificing any modern comforts. That meant tucking most of the interior volumes beneath the artificial hill, with constellations of skylights and the glass facades keeping them from feeling dark and cut off from the lushly landscaped yard. From the perspective of the inhabitants, gazing out at the water, their neighbors might as well not exist at all. Yet, in the photos, you can see those other houses just peeking over the fence line.

Inside, “House in the Landscape” is sculptural and minimalist, with hardly a straight line in sight. Curving white plaster staircases and natural materials like teak wood reinforce the connection to the outdoors, adding to the overall ambiance that “favorably affects the internal emotional state.” 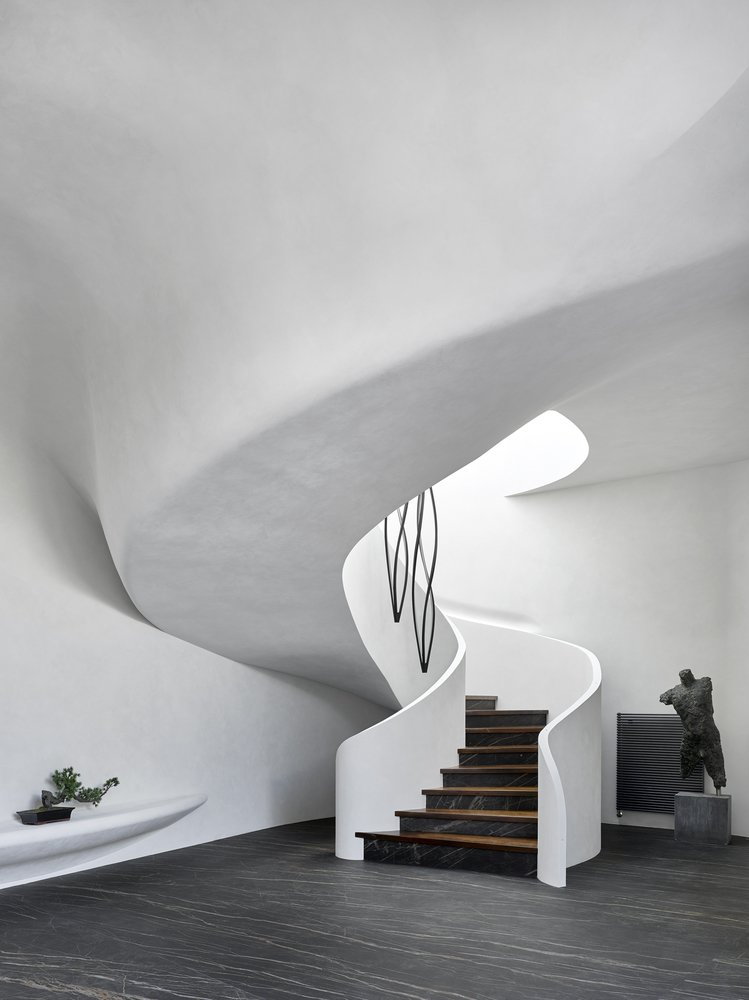 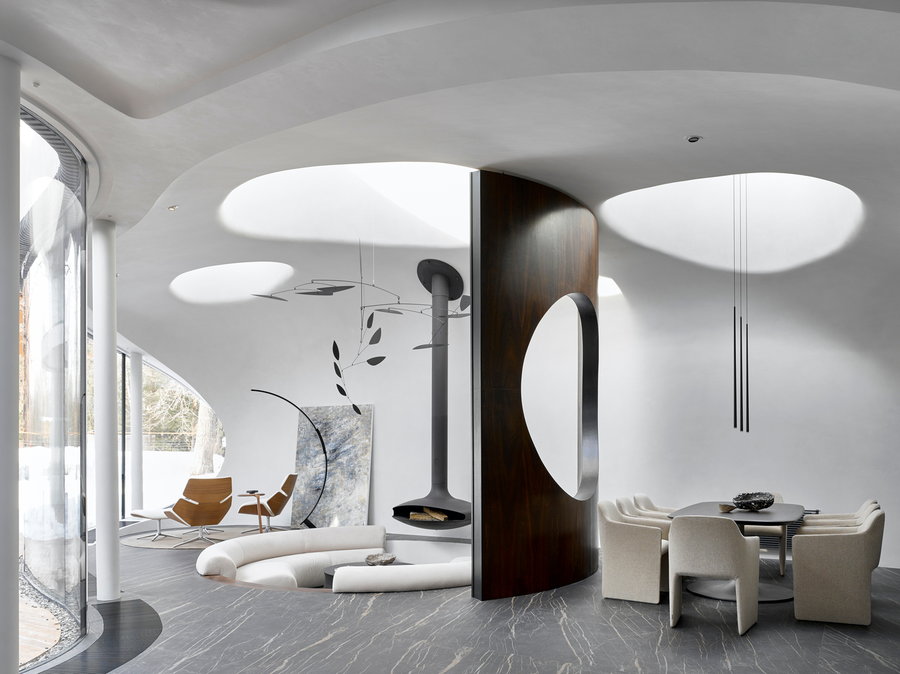 The Niko team adds that their main inspiration for the design was “the metabolism of organic architecture. As a result of the inexpressive environment, the fundamental concept base was the integration of the building into an artificially created landscape and the inextricable connection of architecture with the open courtyard site structure. This is a dialogue with the natural order context. The project was created taking into account the living moving space for human life as a creation and a component of this nature. It is a union of biological images, engineering, and architecture.” 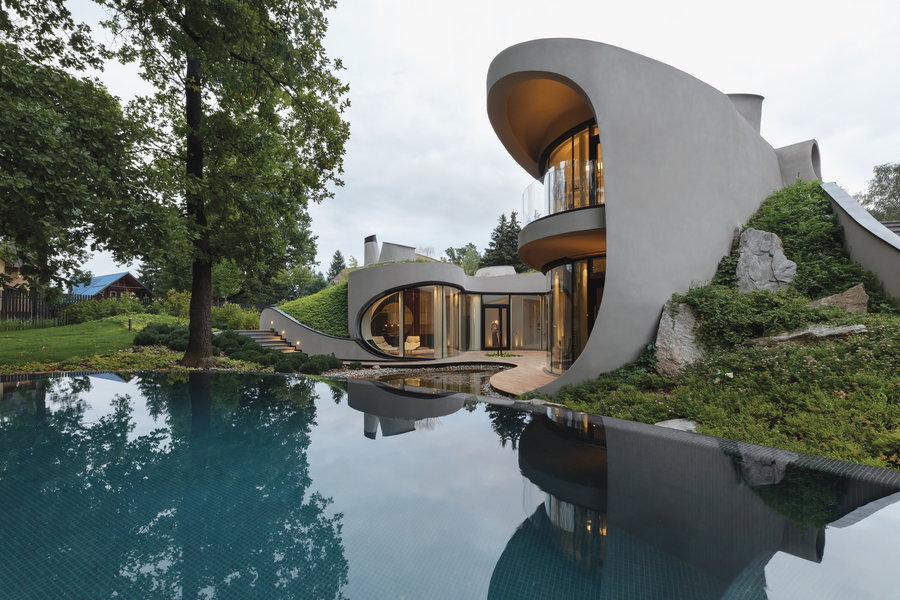 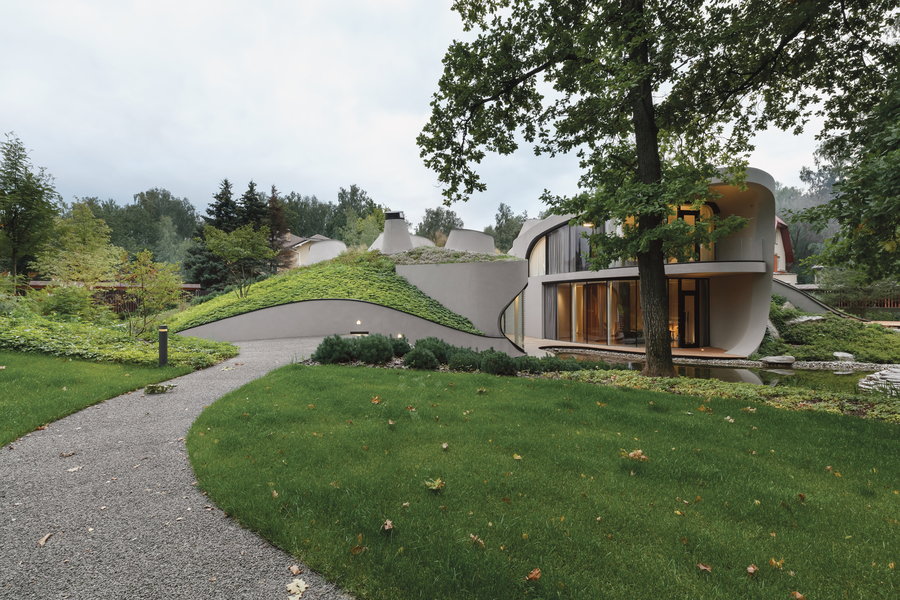 “The architectural composition of the building develops from the outside to the inside. It is interconnected with the environment, being an organic architecture with a philosophy of metabolism. Temporary and permanent components are clearly traced: the framework and the changing essence of the surrounding world, the biology of architecture, [and] the unity of architectural and natural design.”