Most of the millions of people who walk, bike, hail cabs, wait in long deli lines, ride double-decker tourist buses and otherwise go about their usual business in New York City every day never see vast sections of the metropolis that are hidden from the casual observer’s eye. You could explore every last corner of Manhattan, gazing up at all of the architecture, without realizing there’s essentially a city on top of the city that can only be taken in as a whole via plane or helicopter.

New York City maintains stringent building regulations to preserve the facades of its historic landmark buildings, requiring any rooftop additions to be set back far enough to be invisible from street level. This rule applies to all the luxurious penthouse gardens, terraces, swimming pools and greenhouses that have sprouted up on the city’s rooftops for over a century, but as developers look to add more square footage to the densely populated urban center, they’re increasingly creating an exclusive ’stealth’ version of the city, full of modern structures.

A jagged loft addition recently completed by the firm WORKac serves as a dramatic example of what might be too far above your head to notice. Named ‘The Stealth Building,’ the hidden structure adds a three-story penthouse to the roof of one of Tribeca’s oldest cast iron facades. The addition is hidden from view not only due to its height, but also by the flat, windowless walls of adjacent structures. 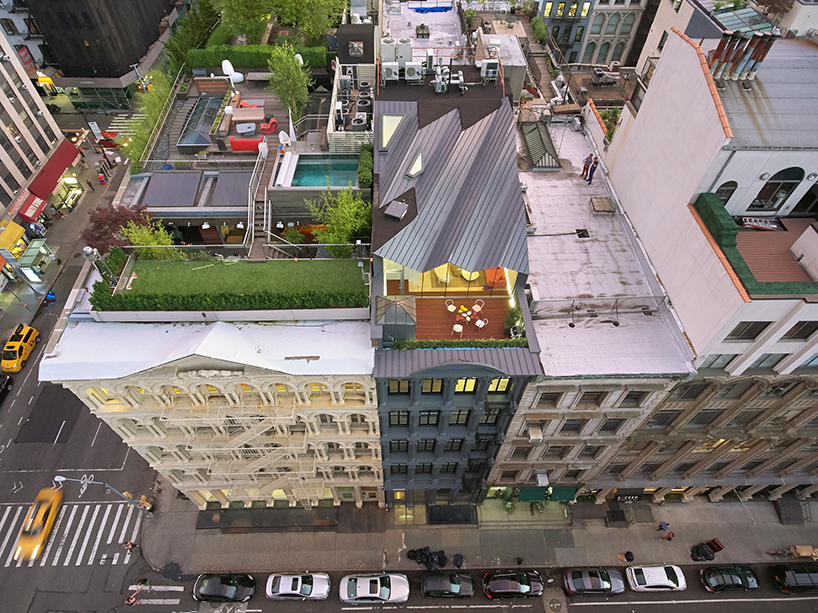 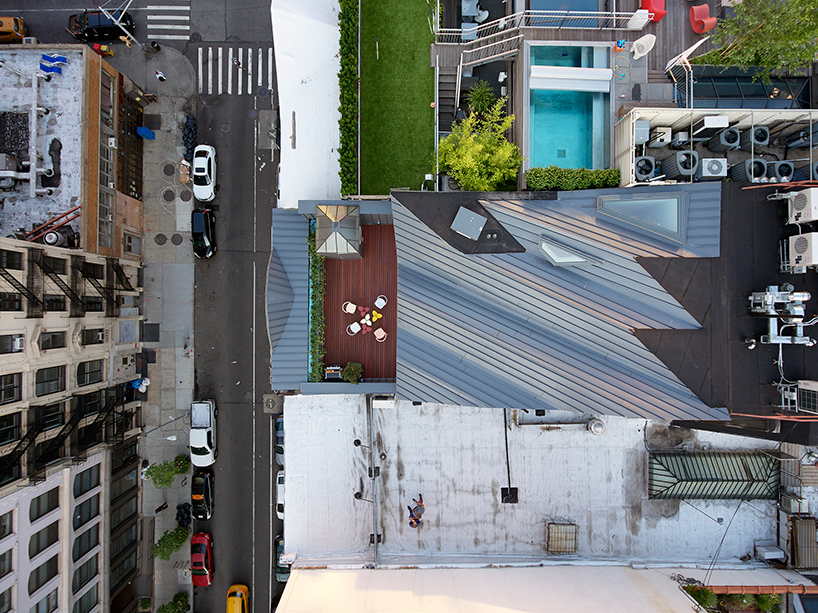 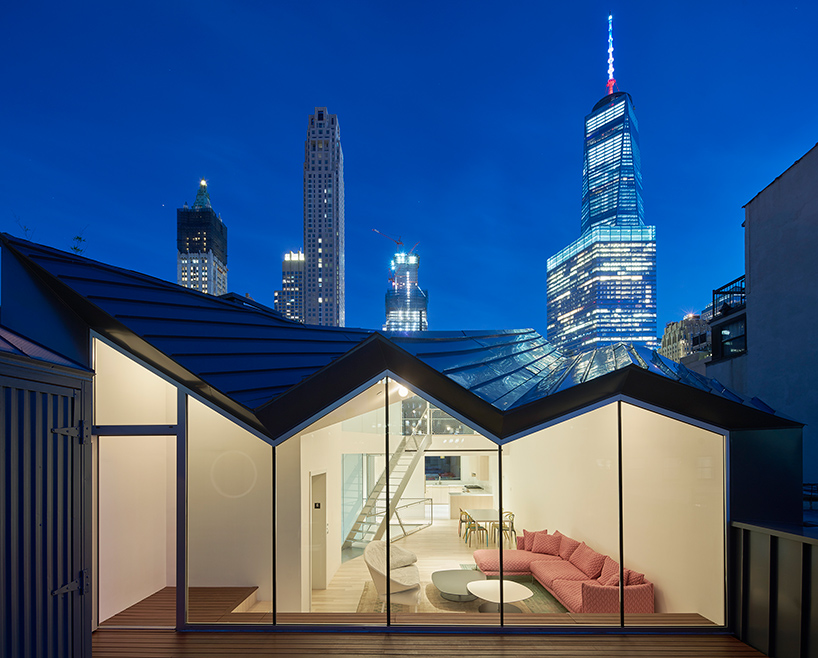 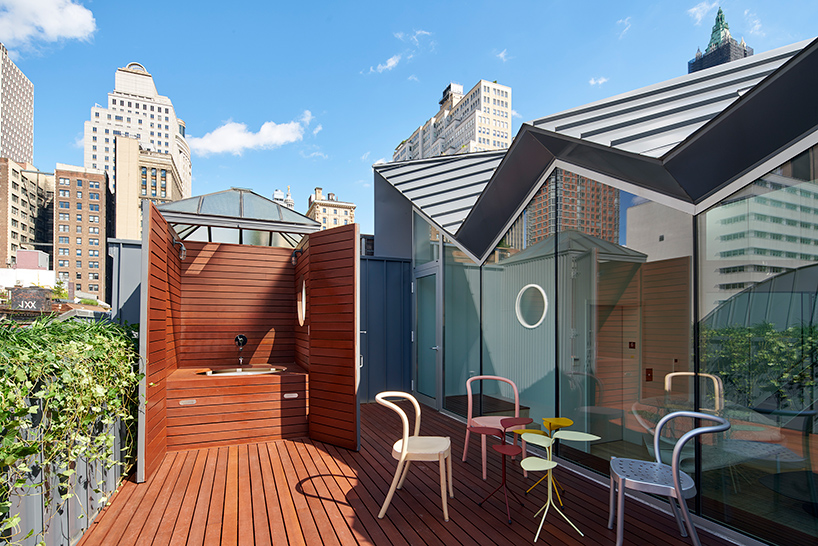 An abandoned elevator bulkhead and the architectural ‘crown’ projecting from the top of the facade shield the penthouse’s private terrace and its full-height glazing from residents of buildings across the street, while the mountain-inspired zig-zag roof shape concentrates views of city landmarks through the glass walls in the rear of the structure. The former elevator bulkhead is now a private enclosure for the rooftop hot tub, opening onto the deck. 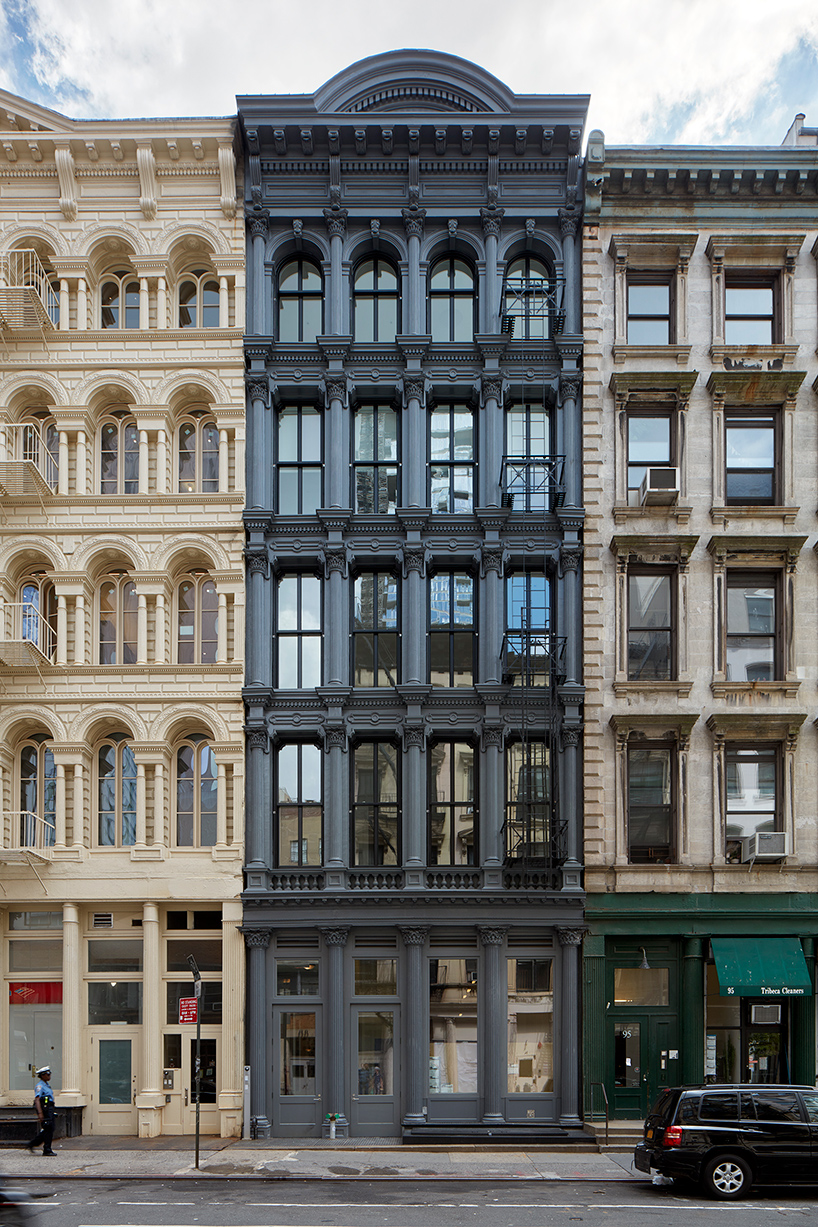 Unlike other penthouse projects that add a single-family residence to the rooftop of an existing structure, this one creates new spaces for residents of the luxury apartments below. The rooftop penthouse is part of a larger renovation for the entire building at 93 Reade Street, which boasts one of the city’s most beautiful cast iron facades.
“For the apartment interiors and the public area, WORKac created spaces that combine nature-inspired elements and systems with new ideas about urban living,” say the architects. “From the tessellated green all at the lobby to generous planters and balconies at the second, sixth and seventh floors, connections to the outdoors are emphasized… the penthouse combines sleeping spaces and a family room within the old fifth floor of the building with new entertaining and dining spaces under the new roof at the sixth floor.” 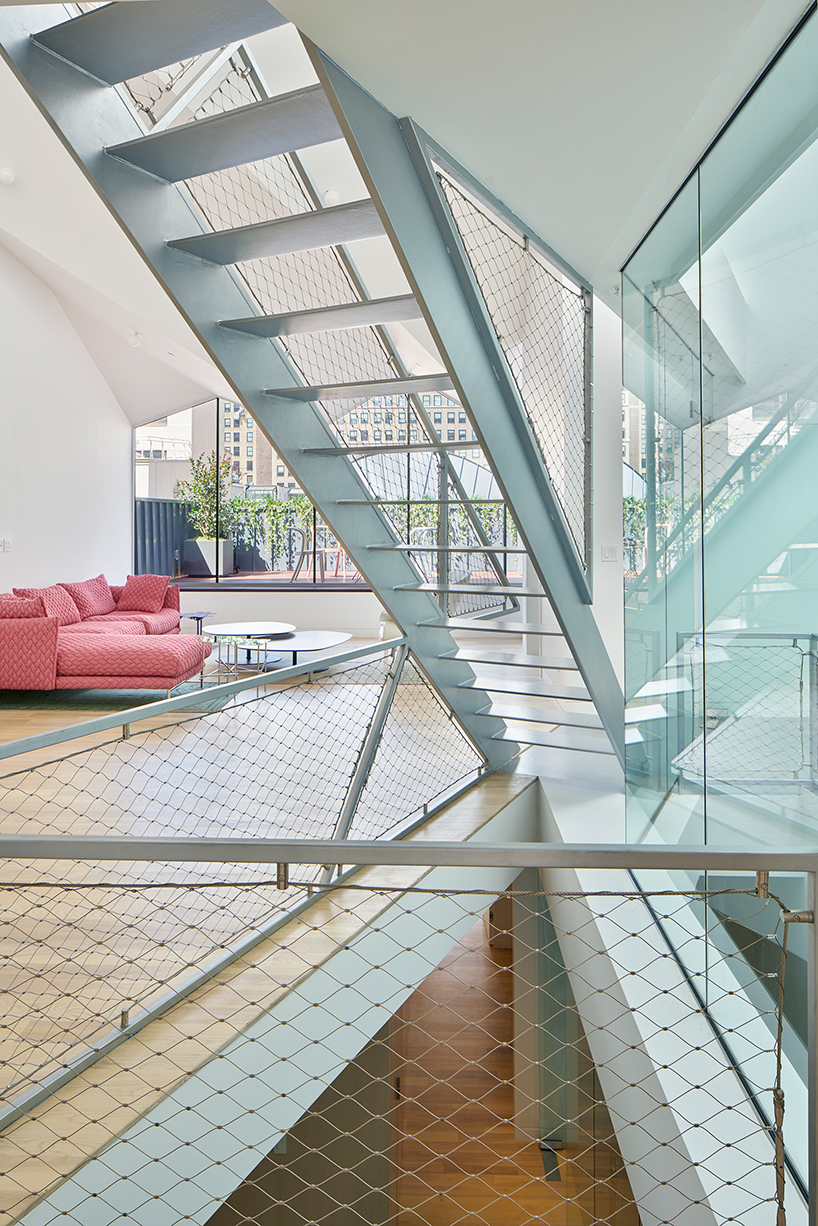 This new layout also integrates a series of glassed-in atriums stretching from the rooftop down to the second level, encouraging daylight to penetrate deep into the building’s interior. Around each of these atriums, a built-in volume made of wood creates a sort of apartment within an apartment, with a lofted lounge and greenery. 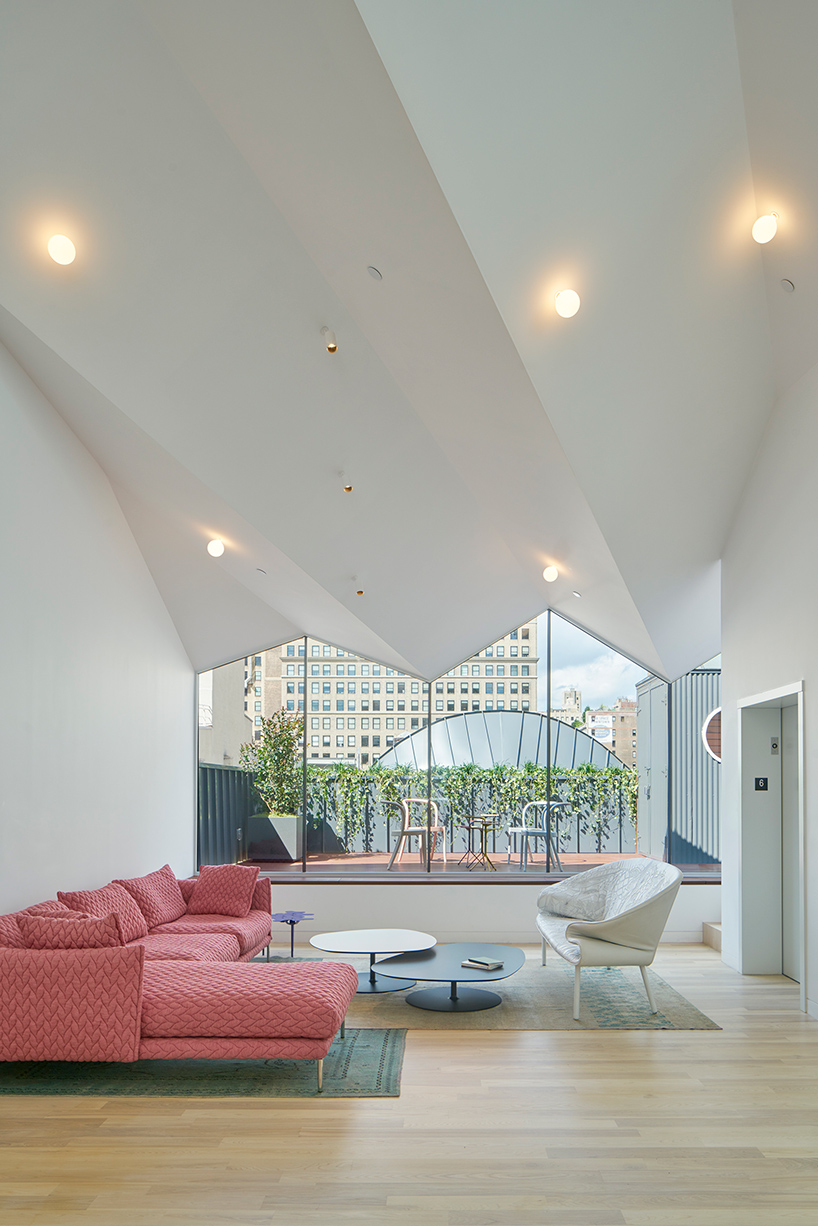 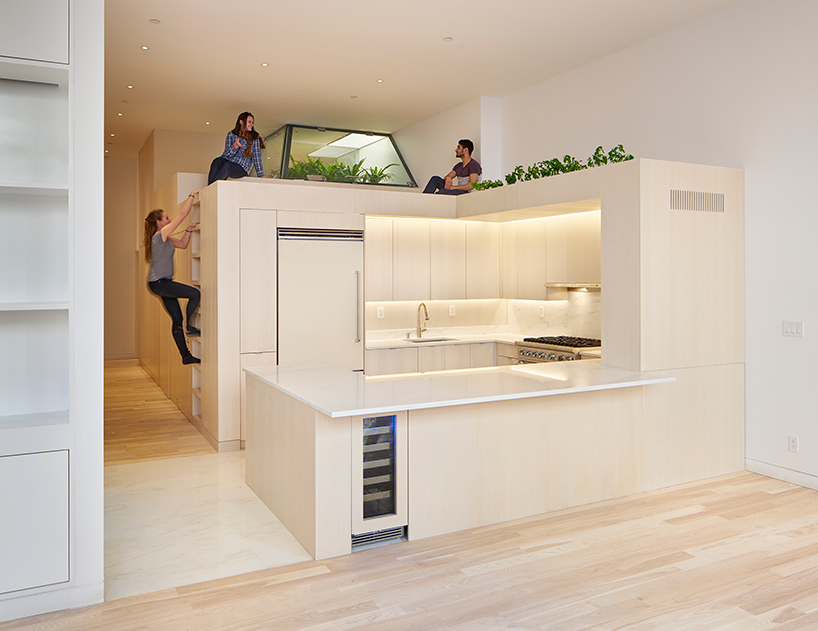 Continue reading below
Our Featured Videos
“Within each apartment, a ‘third space’ between bedrooms and living spaces is created at the top of the volume containing storage and bathrooms,” the architects explain. “Less than four-feet high, this ‘bonsai apartment’ is outfitted with a futon, seating areas, and an herb garden above the kitchen. Its main feature is a fern garden connected to the master shower below. Steam from the shower collects on the glass walls of the garden and waters the plants.”