If this unusual concrete home in Japan looks like someone smashed through walls during a renovation only to stop halfway through, that’s because they basically did. In the midst of transforming an old five-story building into their own home and office, the architects at MAMM Design realized there was beauty in all the raw, ragged concrete edges and exposed rebar, which led them to change their design to accommodate the half-finished feeling. At the heart of the space, the remains of a formerly enclosed staircase have become a stunning focal point, now turned into an atrium cascading with plants. 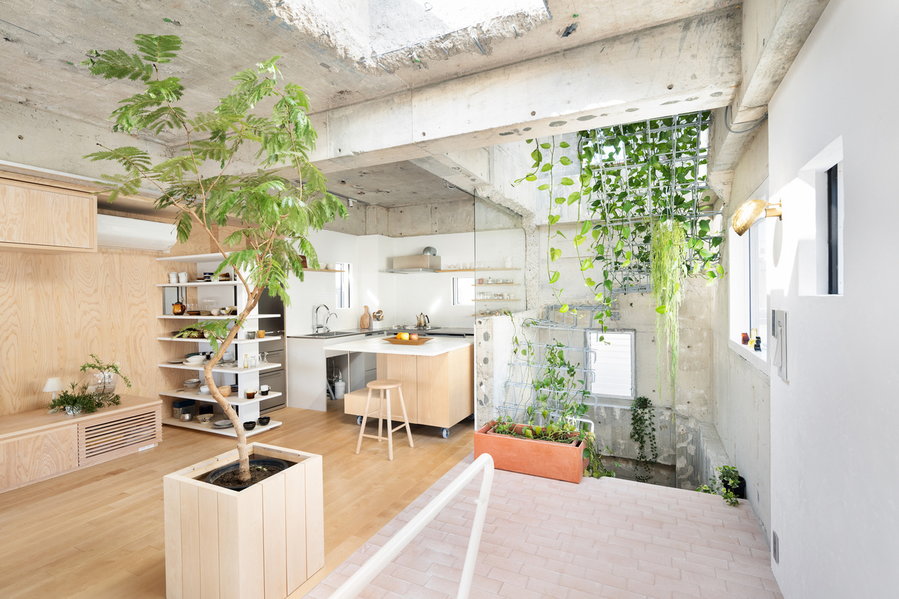 “In this renovation, instead of designing everything from the beginning, we designed it while proceeding with dismantling,” the architects explain. “The elements of the past, which emerged as the demolition progressed, provided considerable inspiration for the design.” 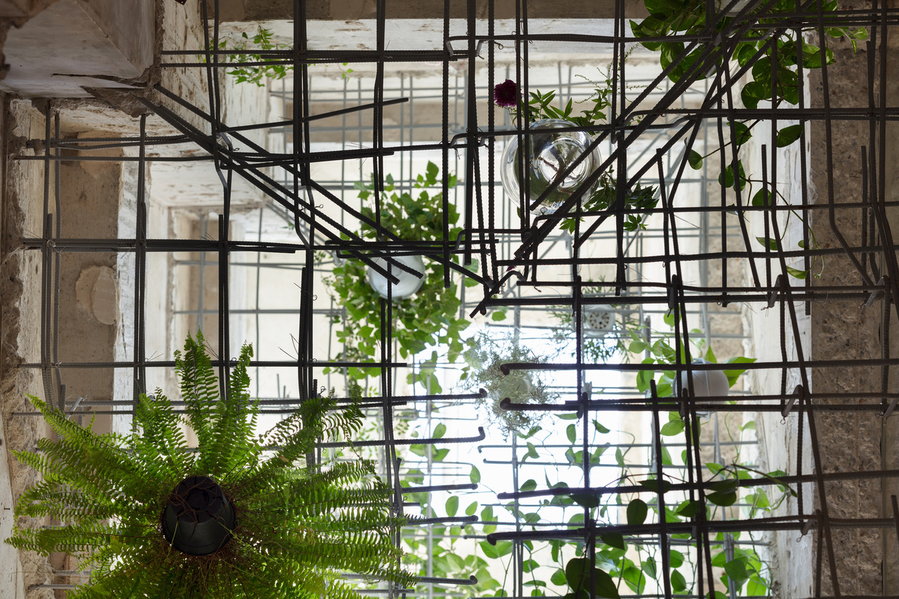 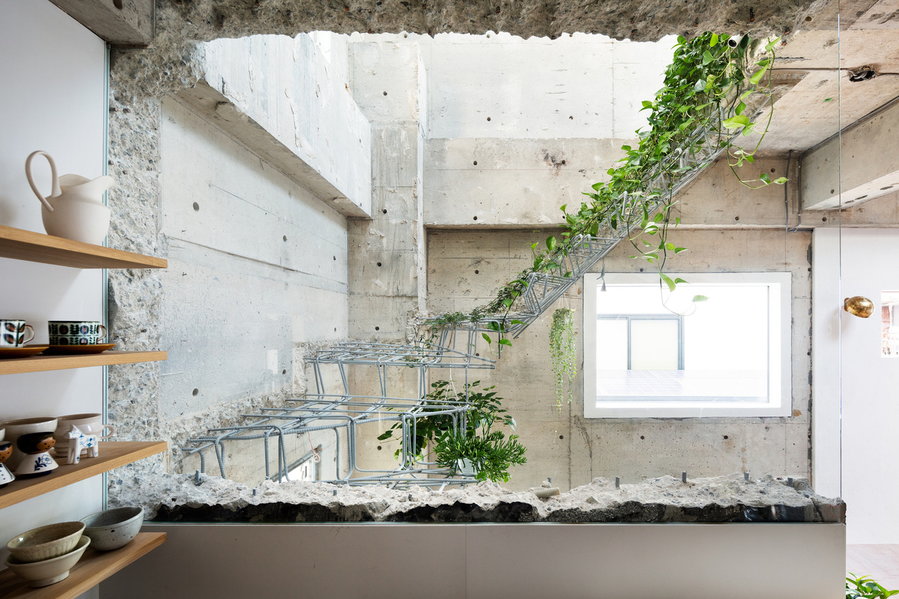 Located in the Koishikawa/Hakusan area of Bunkyo Ward, an area historically full of bookbinding and printing-related facilities, the building once housed a printing factory in its lower half and a private residence in its upper half. The second owner converted the entire structure into a home. When Akira Mada and Maya Mada of MAMM Design purchased it, they wanted to restore its former live/work layout, but adapt it to their personal needs and style. 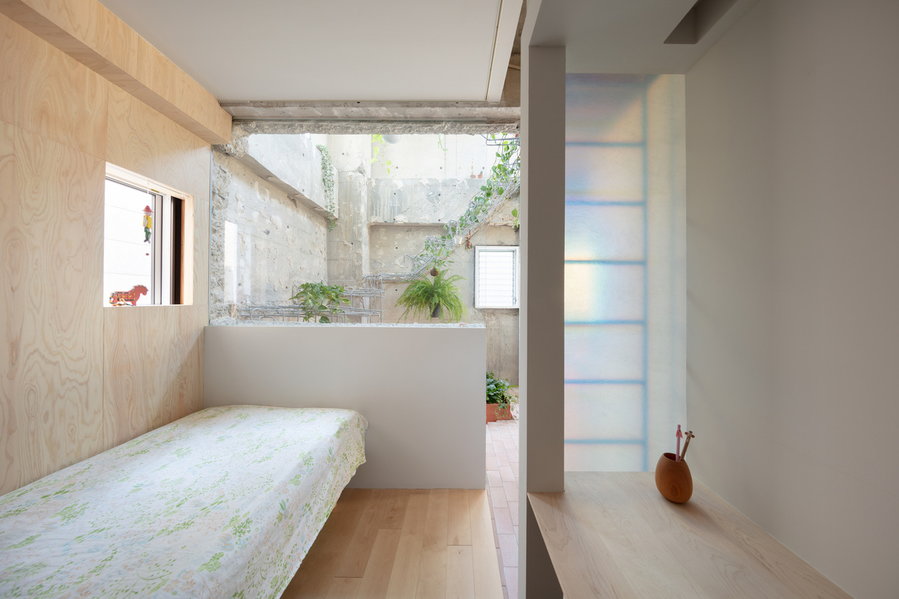 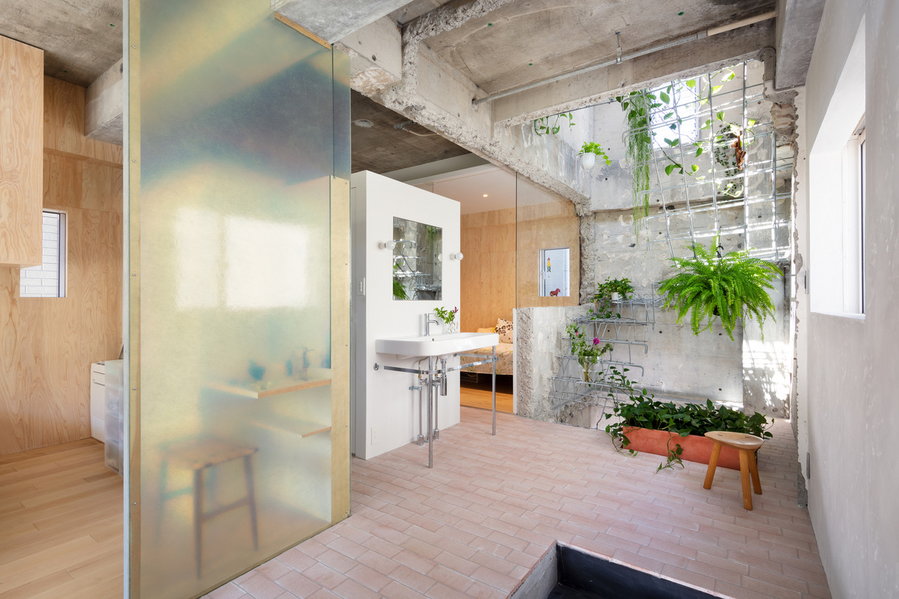 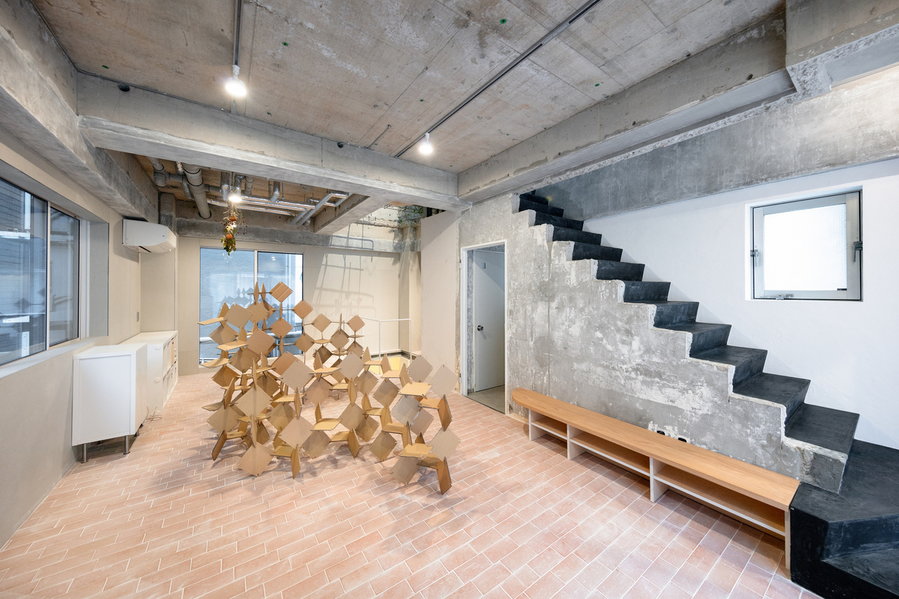 They started with the staircase, which was contained within its own dark, dim walled stairwell. At first, they envisioned knocking out the concrete walls and putting a skylight at the top to create an atrium, replacing the old stairs with new ones. But as the demolition revealed the jagged concrete edges of the walls and the internal rebar supporting the old concrete stairs, they realized they wanted to keep some of these elements in the finished product. 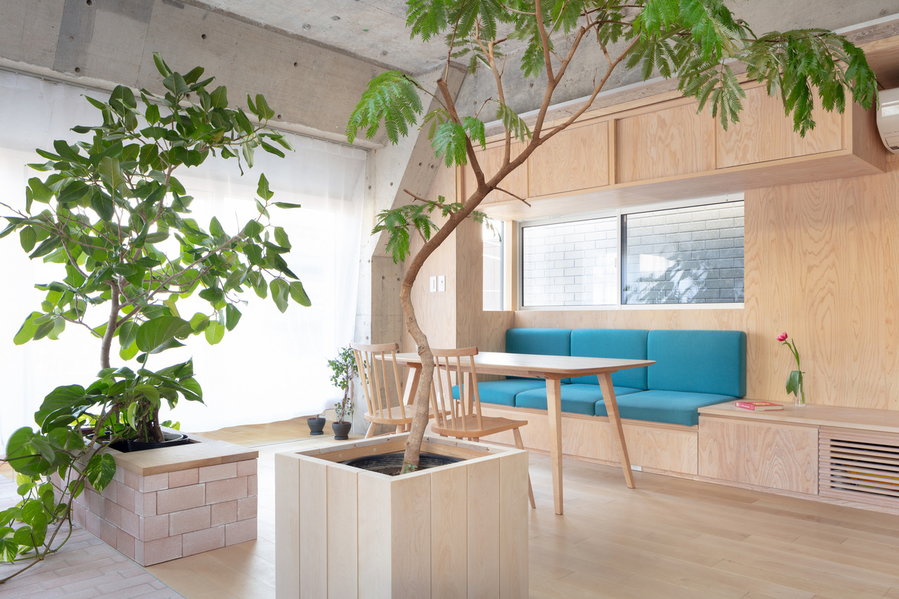 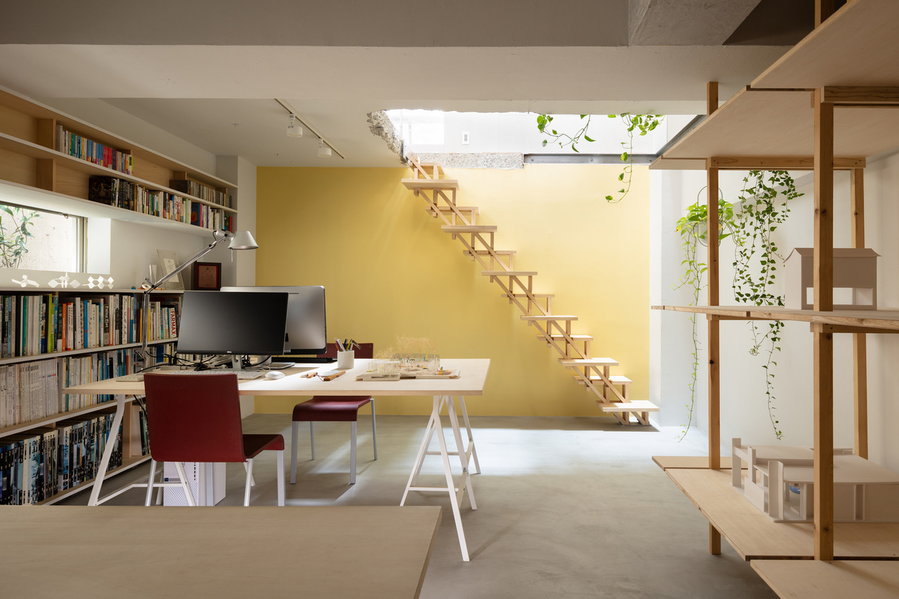 Thus appeared the home’s star feature, the skeletal metal staircase now entwined with living vines. Stretching the full height of the building, the stairwell is topped by a skylight that can be opened for exposure to the fresh air, with a ladder providing rooftop access. The old rebar staircase is now purely decorative, with new stairs piercing the floors and ceilings in other locations. 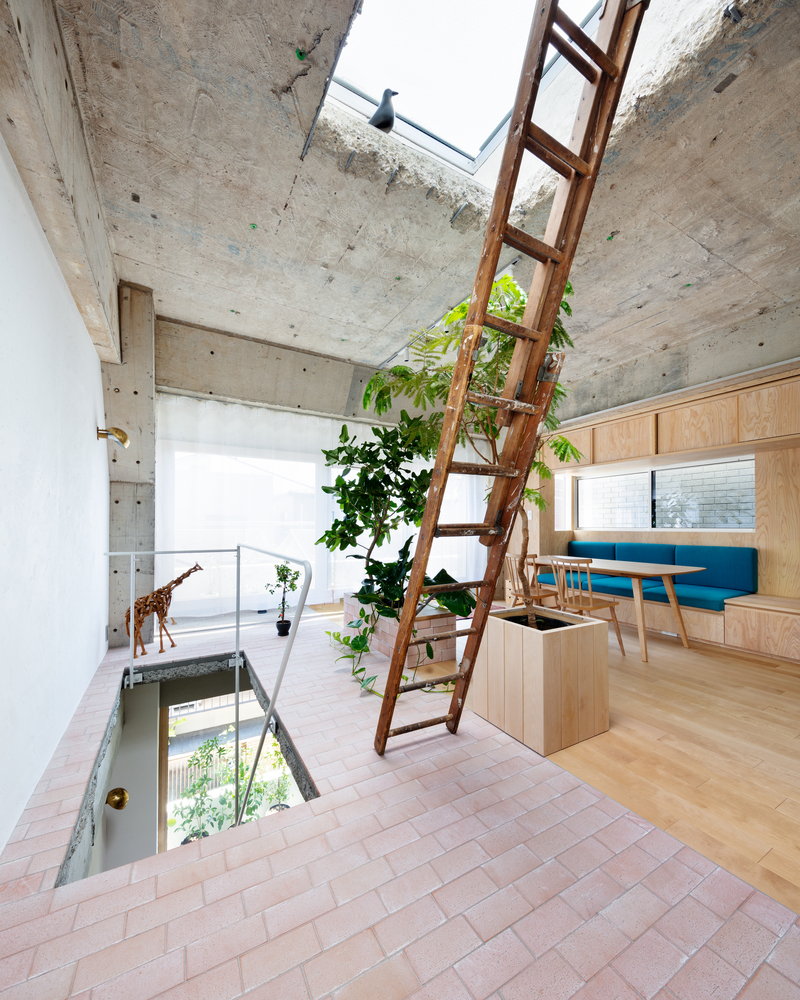 The rugged nature of the exposed concrete and metal contrasts beautifully with new elements the architects brought in, like blond plywood, salmon-pink tiles, and translucent partition walls. Additional plants, like small trees in oversized planters, help draw a sense of vitality into the rest of the home and out onto the balcony and rooftop. 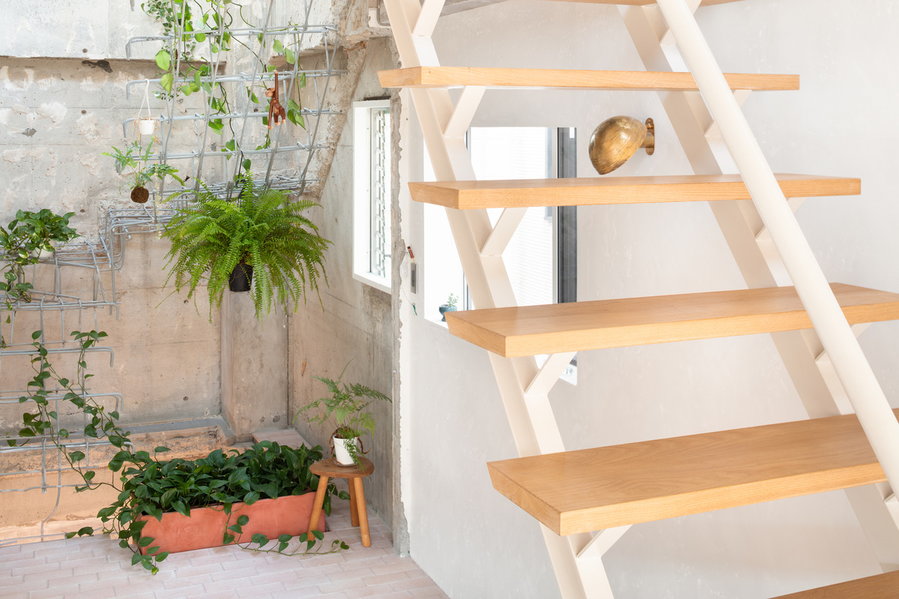 The renovation also revealed some surprises. Had they started the process with rigid ideas of how everything should look, the architects might have missed out on some defining features that add a lot of texture and historical context to the redesign. “In order to apply a new finish to the outer wall, I scraped off the existing plaster finish, and found the glossy tiles from the beginning of the new construction,” says Akira Mada. “I thought it would be a good contrast with the green of the newly planted trees, so I polished it and decided to use it as it is. In this way, as we proceeded with dismantling, we carefully read the existing shapes and materials, and sometimes gave them new meanings.”