The defense mechanisms of plants are usually limited to things like thorns, stinging hairs, irritating oils, and poisonous compounds. Machetes aren’t among them, to put it mildly. But in his quest to explore the intersection between robots and the natural world, artist David Bowen has armed a philodendron with an enormous razor-sharp blade, and every jab, slice, and swipe is directed by the plant itself. 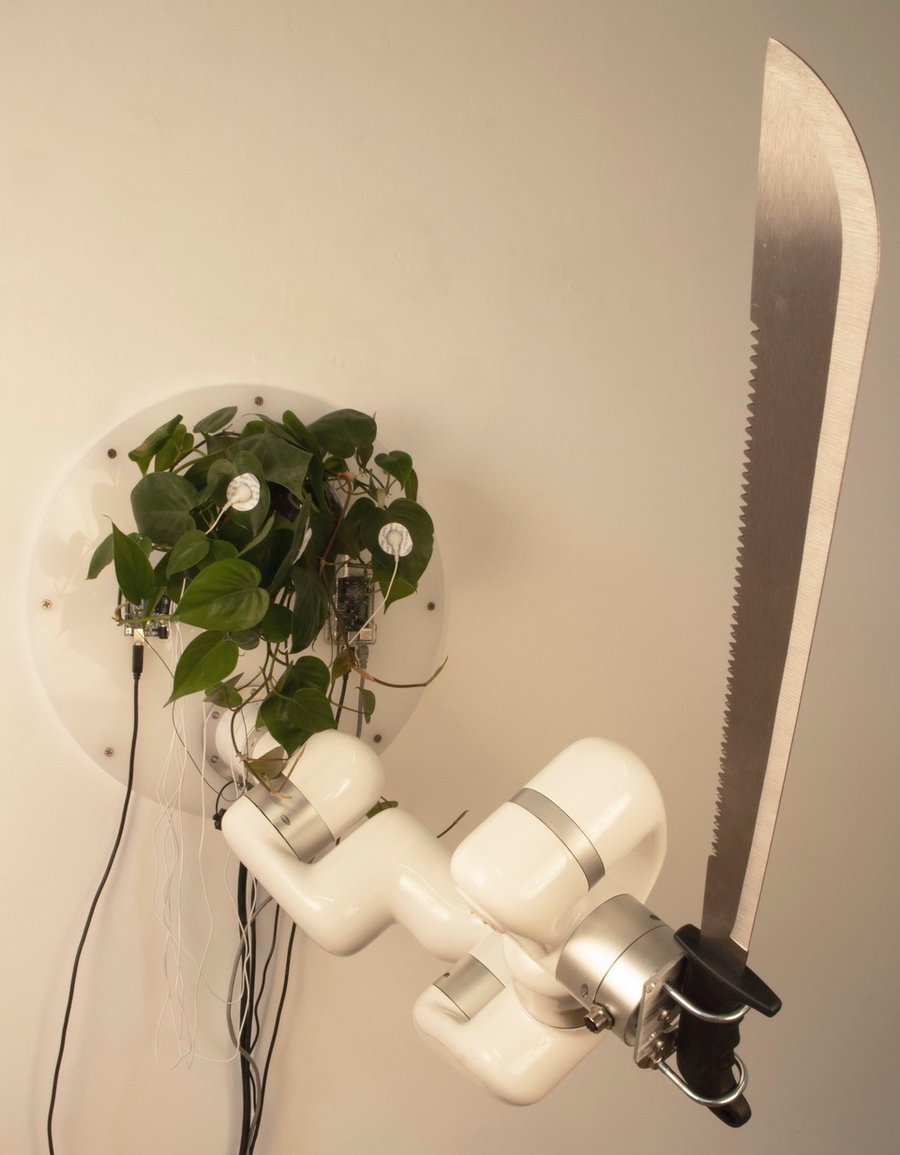 Watching “Plant Machete” in action is a little surreal. The multi-jointed robotic arm pivots and rotates, the blade swinging to and fro in a threatening manner. The plant appears to be fighting back against humans that approach it, warning us that it’s no longer defenseless. Skeptics might immediately wonder whether this disturbing display is actually controlled by a computer program, but it’s the result of EEG sensors translating the electrical signals inside the plant into movements. 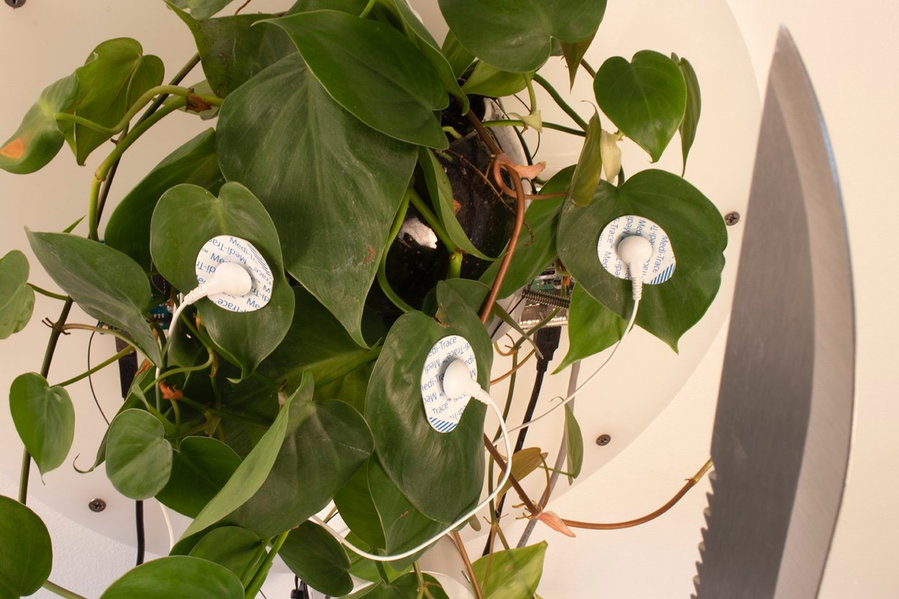 The system uses an open-source Arduino micro-controller connected to the plant to read these signals across the plant’s leaves. Bowen’s custom software maps them in real time to the movements of the joints in the arm wielding the machete. This basically makes the plant the “brain” of the installation. Bowen mounted the plant to the wall and filmed the results in all their glory.

Another recent project by Bowen called “Plant Drone” gave a plant the unlikely ability to fly. As with Plant Machete, this project translated the real-time variable resistance data collected from a live on-board plant into movements: left to right, forward to reverse, up and down. That allowed the plant to pilot the drone, with a mounted LED light creating long exposure drawings in the night sky and tracking its path. 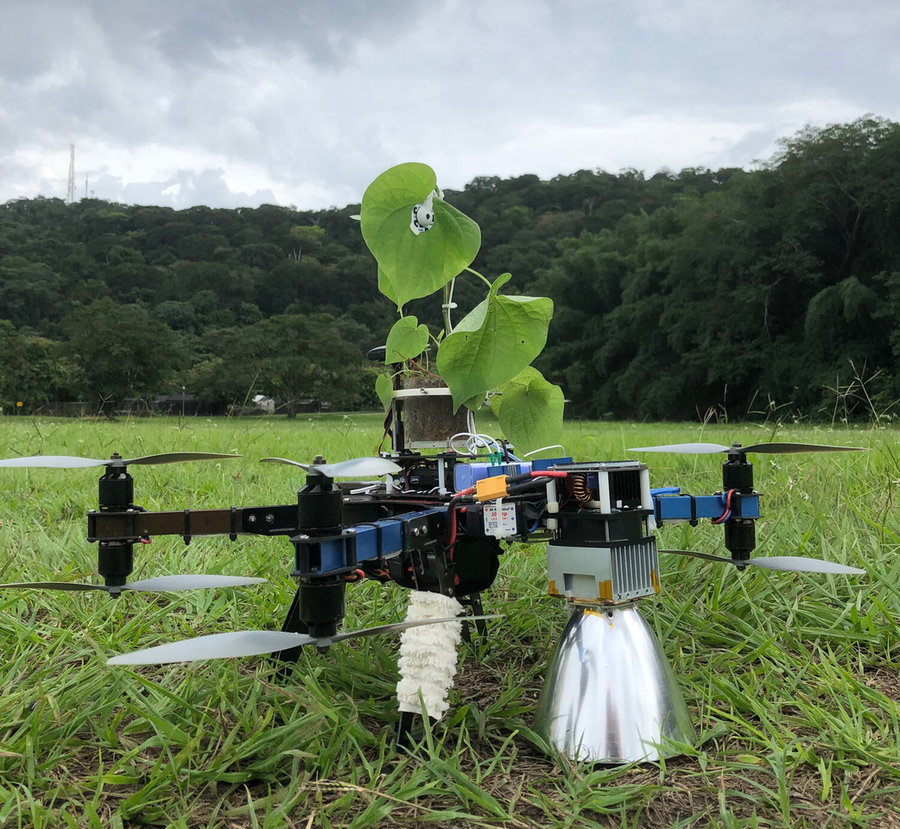 Similarly, “Fly Revolver” tracks the movements of flies inside an acrylic sphere with a target backdrop, processing them with custom software and outputting them to a robotic device that aims a revolver. Collectively, these projects might induce a feeling of unease in the viewers. What if plants and animals really could use our own weapons against us? What would that say about our accountability to them, and the consequences of our actions?

“Using intersections between natural and mechanical systems, I produce unique relationships within my sculpture and installations,” says Bowen in his artist statement. “With robotics, custom software, sensors, tele-presence, and data, I construct devices that are set in motion to interface with the physical, virtual, and natural world. The devices I construct often play the roles of observer and creator, providing limited and mechanical perspectives of dynamic situations and living systems. These devices and situations create a dissonance that leads to an incalculable changeable situation resulting in unpredictable outcomes.” 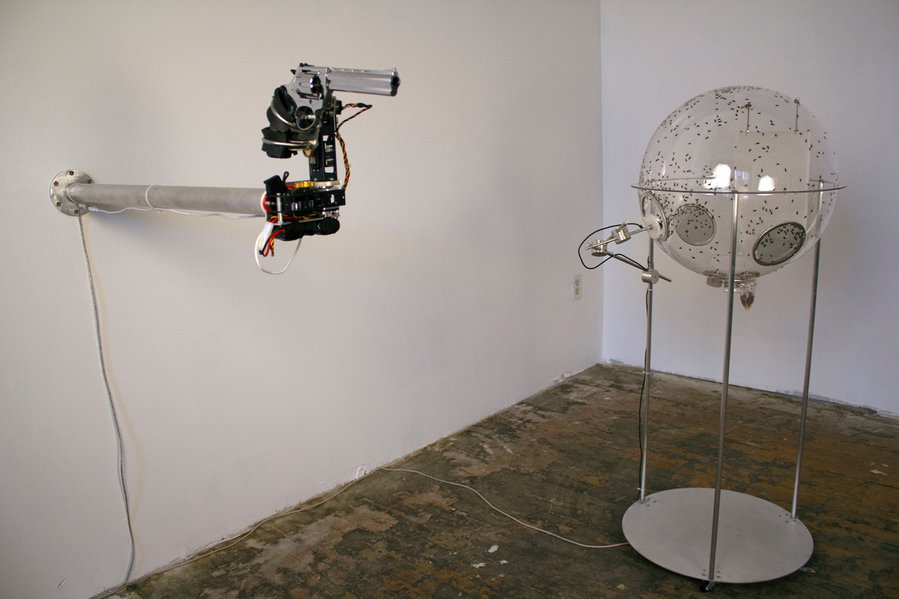 It may seem absurd to imagine that plants have the capability to communicate with us, but scientists have found evidence that they speak to each other in languages we simply don’t register or understand. UK-based computer scientist Andrew Adamatzky recently published a study in which he compared electrical signals in mushrooms to human language, finding that their patterns can be interpreted as up to 50 different words. In another study, ecologist Suzanne Simard demonstrated how trees “talk” to each other by sending each other nutrients via a network of fungi buried in the soil.