Disused industrial areas take up valuable real estate in cities all over the world, but transforming them for a different purpose can be tricky. Many are Superfund sites, or otherwise require environmental remediation before they’re safe to use. As populations continue to grow, reintegrating these places into the urban fabric can be essential, and when it’s done well, the results are incredibly rewarding. That’s especially true when the new projects retain the industrial essence of the setting, pulling in threads of their particular history and culture. 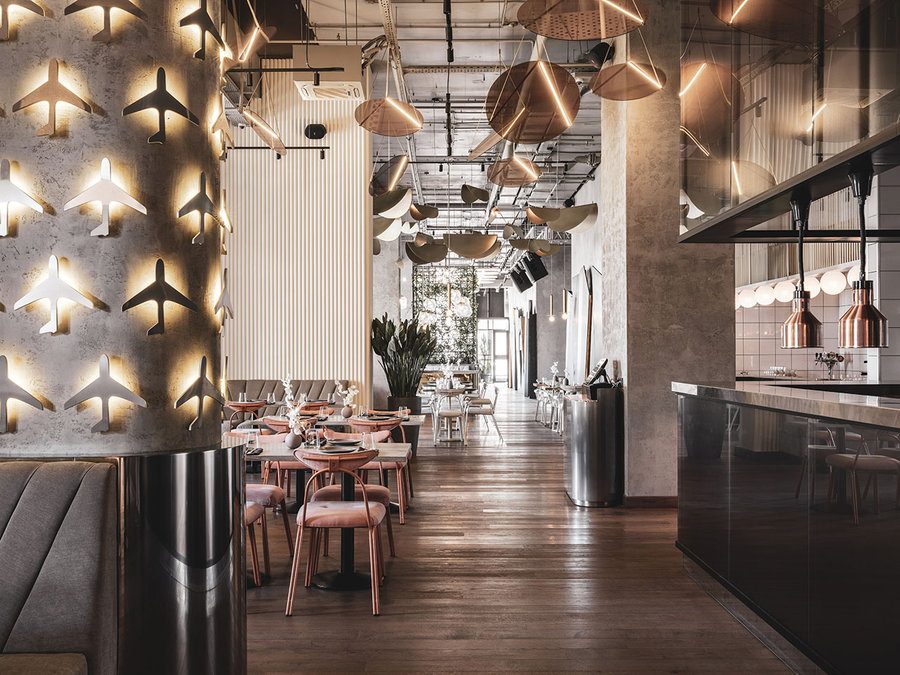 Moscow’s Khodynka Field has a long and storied history that began in the 14th century as a battlefield and host of state occasions. It’s best known as the site of the first Russian-powered flight in 1910, and a regular airfield in use through the late 1980s. Its most recent redevelopment includes the Russian National Air & Space Museum, as well as many new commercial and residential buildings. Tucked among them is Café Polet, a new restaurant designed to pay tribute to the site’s aviation history.

Set within the old Frunze Central Aerodrome, which closed in 2003, Café Polet shows off its history in references both subtle and direct almost everywhere you look. New York-based studio Asthetique has created stunning retro-futuristic interiors full of aeronautical nods with distinctive Soviet flair. There’s something dramatic to see at every turn, from bubble-shaped porthole windows at the entrance to blocky winged statues reminiscent of USSR monuments and early sci-fi films clinging to the columns all throughout. 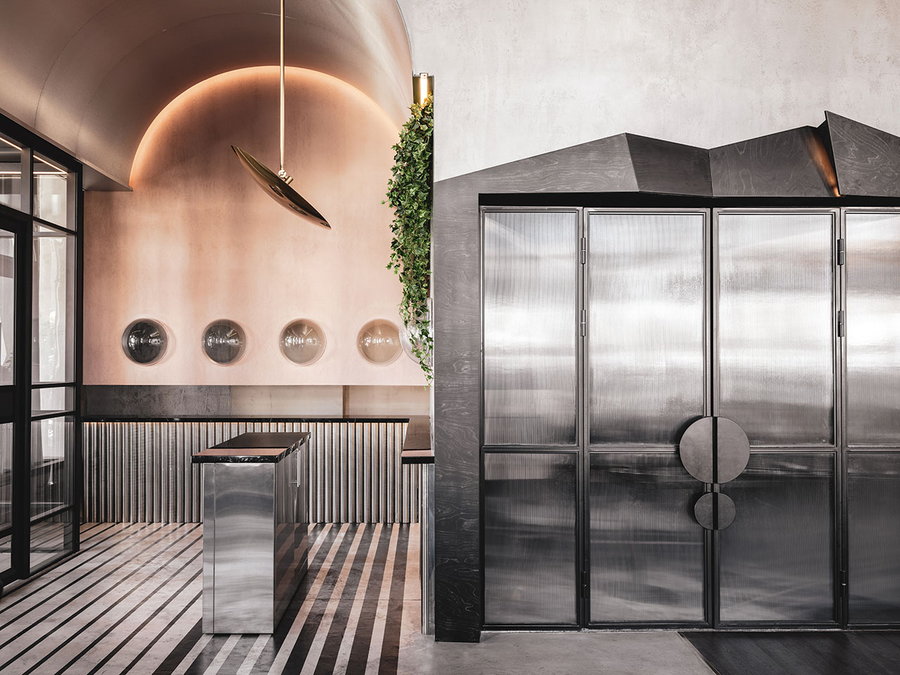 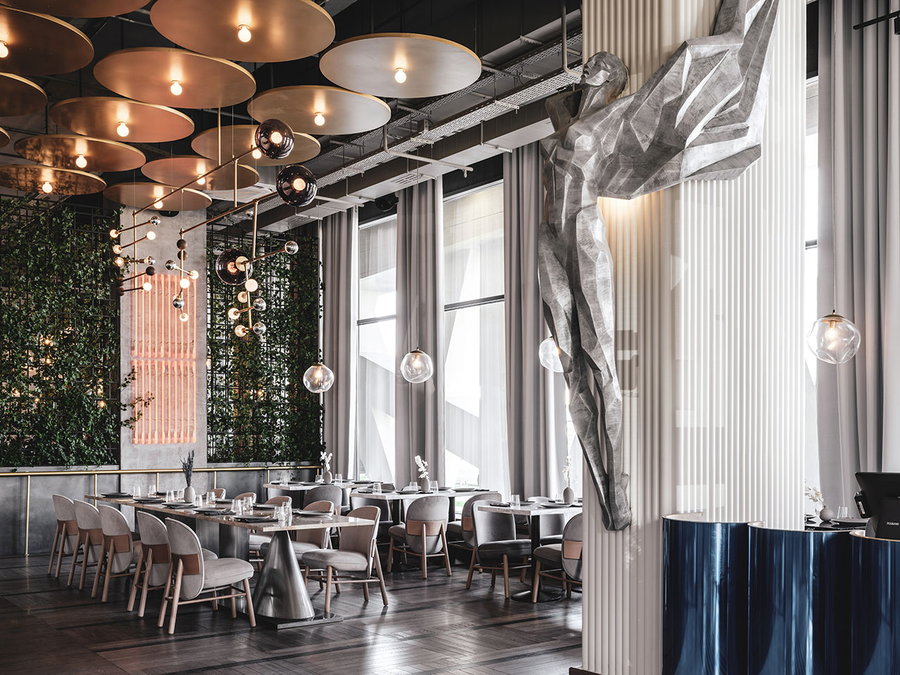 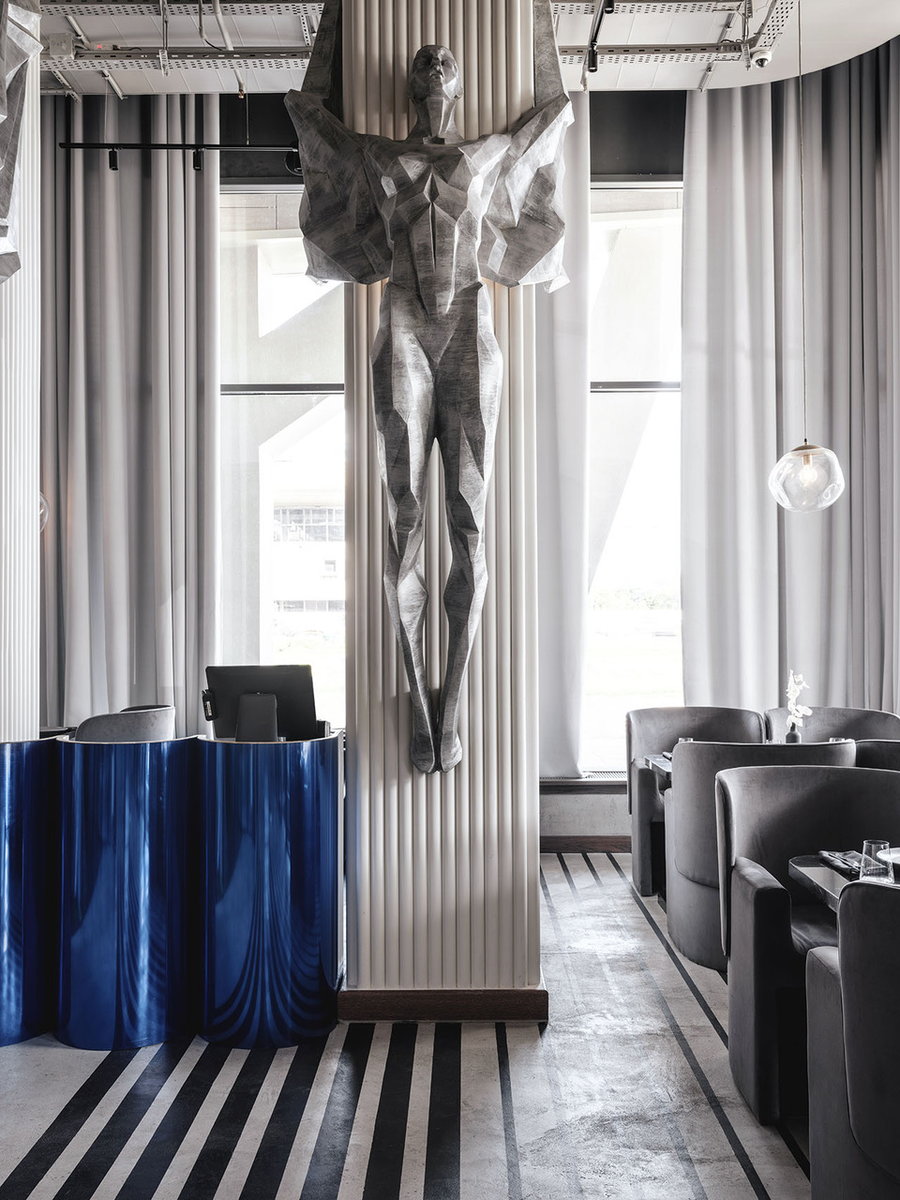 “The idea was to take aeronautics beyond the machine level, to show humans taking flight,” says Asthetique founder and creative director Julien Albertini in Interior Design magazine. Similarly, the entry’s striped concrete floor is modeled on the markings of airport runways, “taking the idea of a landing strip, but then modernizing it.” 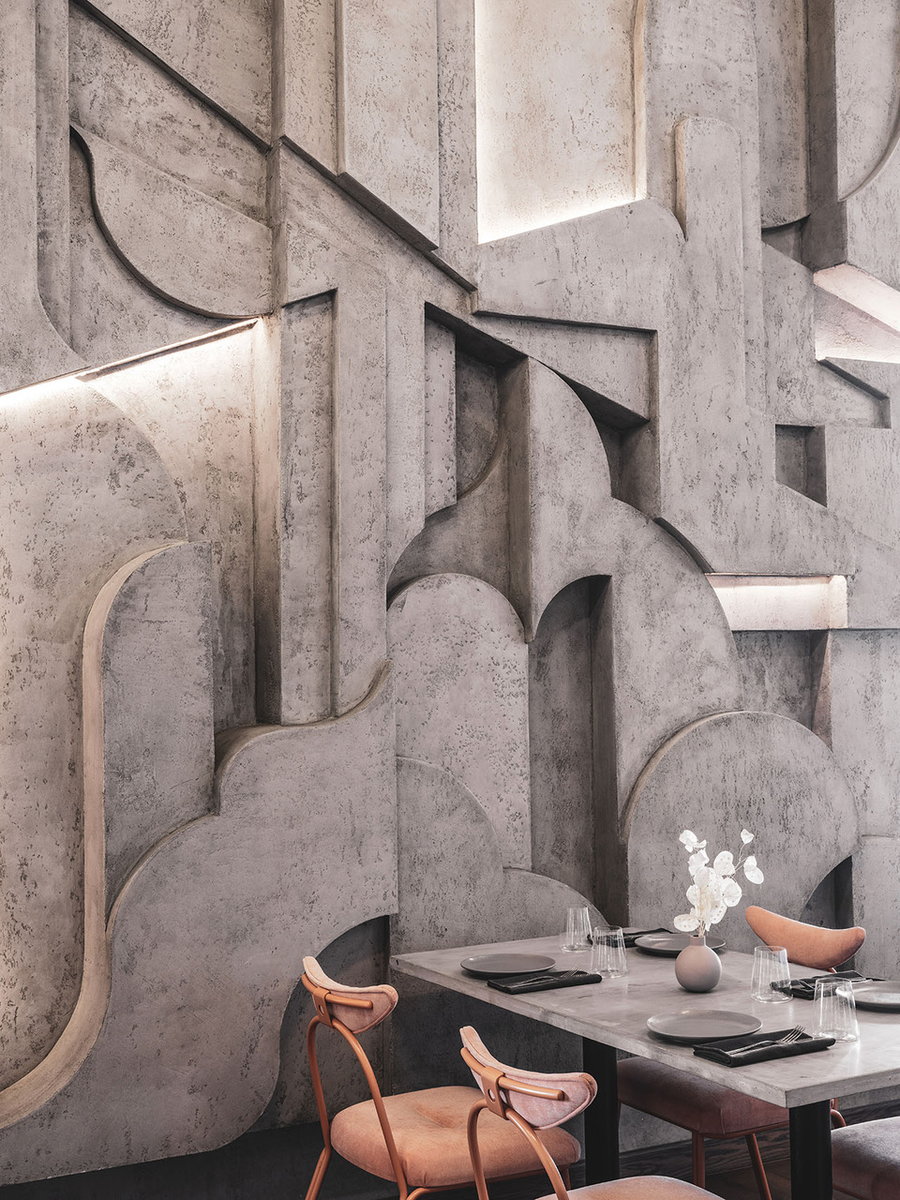 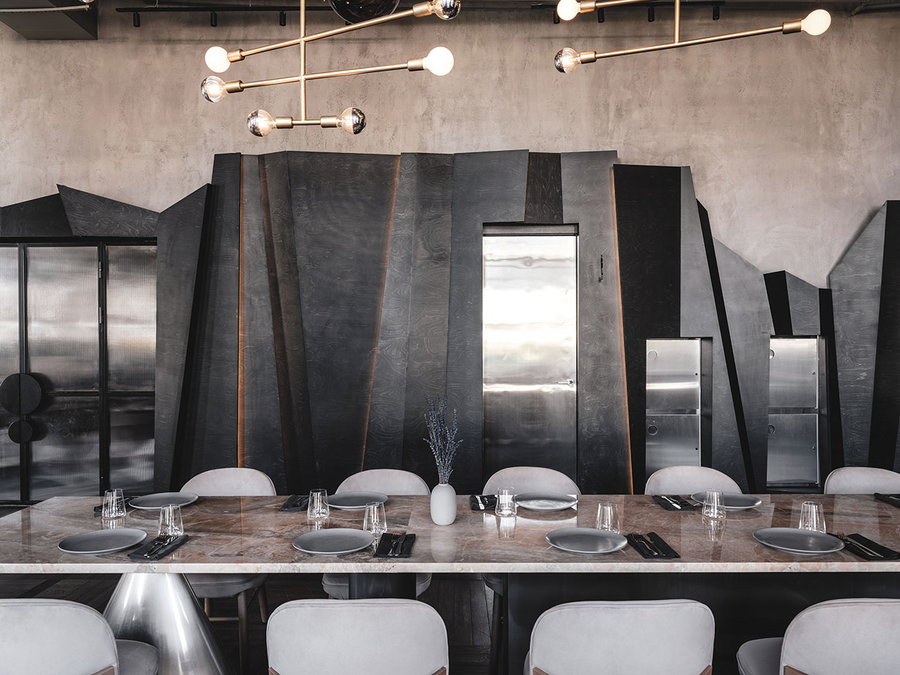 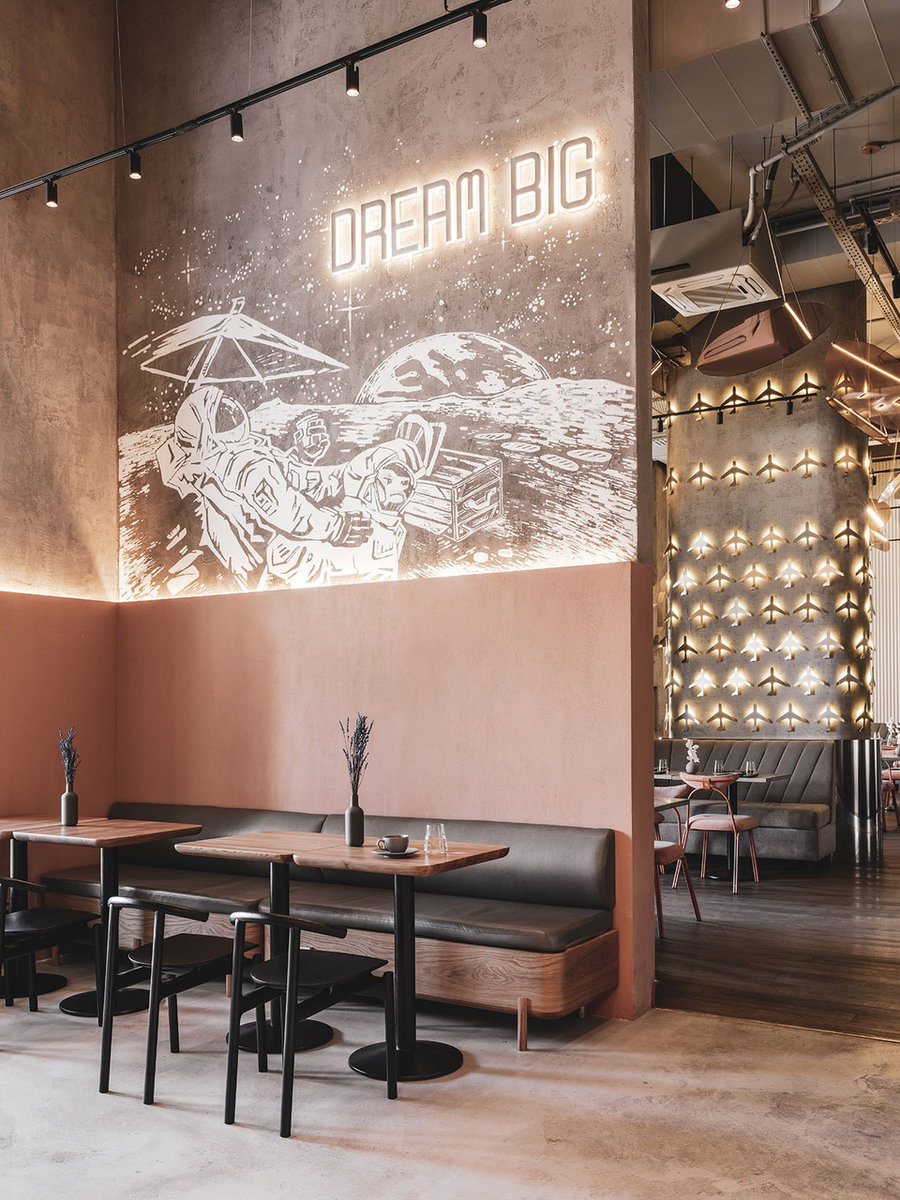 Within the second dining room, a bas-relief panel of plaster-coated plywood creates a striking sculptural effect on the wall. Monochromatic murals depict space travel imagery like astronauts lounging on the moon. Of all the stylistic choices, the most literal stands out as the most fun: tiny back-lit stainless steel airplane silhouettes dotting various surfaces.

Softer elements come into play, too, balancing all of the brutish materials and geometries. Metal screens covered in trailing green ivy separate the dining spaces. The chairs and banquettes are upholstered in soft velvet in shades of gray, beige, and blush. The designers consciously chose pastels to complement the otherwise neutral color scheme, infusing the restaurant with a sense of calm. 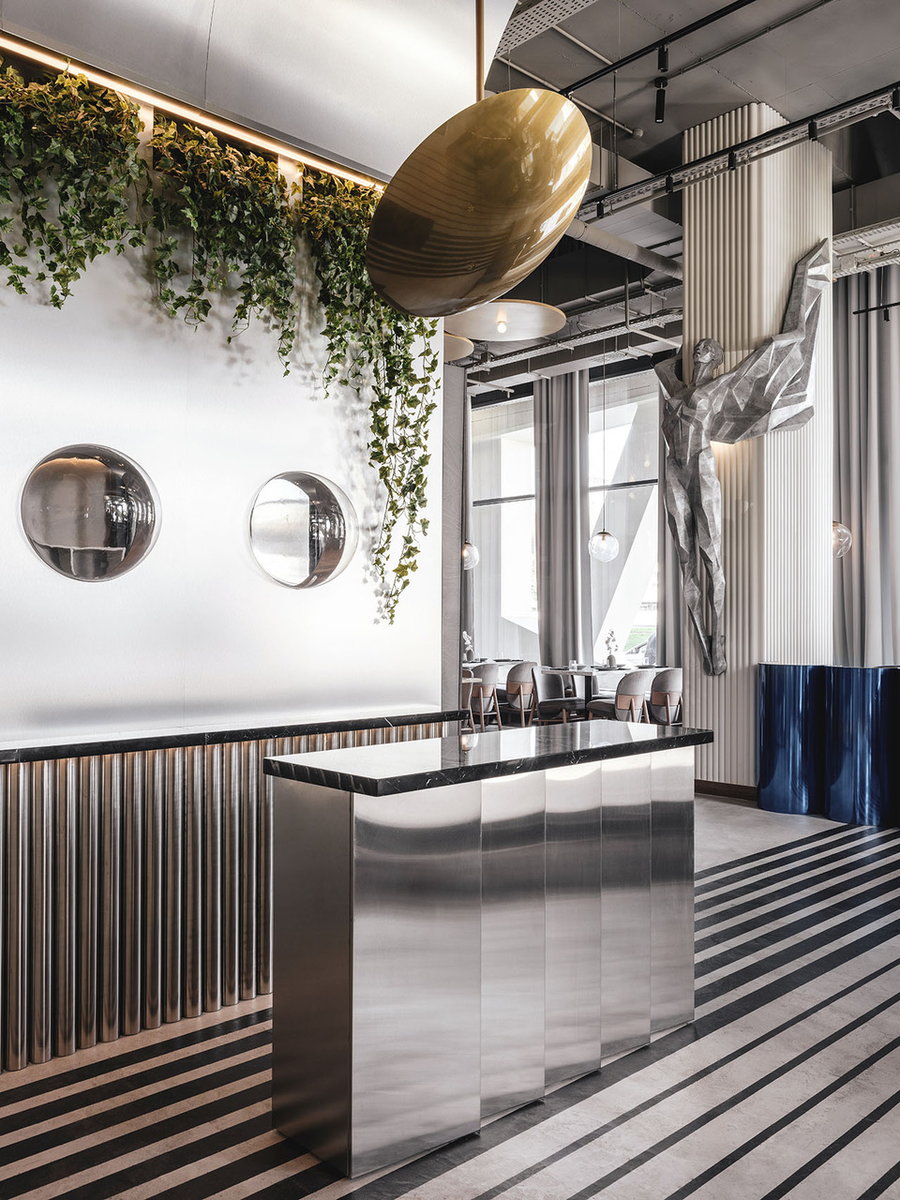 Cafe Polet is located at #2 Khodinskiy Blvd, offering a menu of European and Georgian dishes crafted by chef Aleksandr Airapetyan, with recent standouts including a salad of grilled squid, smoked baby potatoes, and truffle mayonnaise.