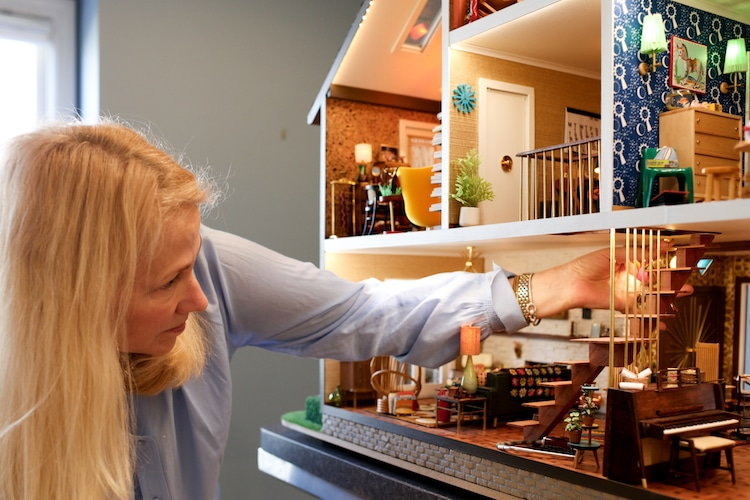 When the coronavirus pandemic first brought normal life to a screeching halt in March 2020, retired interior designer Annie Kampfe suddenly found herself with more time on her hands. She pulled out the dollhouse kit she’d purchased from Earth and Tree Miniatures in Amherst, New Hampshire in 2017 and got to work alongside her husband, Cliff Donnelly. Instead of faithfully reproducing the model, though, they subverted the kit, recutting almost every piece to achieve the midcentury modern vibe they were after.

What began as a way to pass the time soon became a passion. The Kansas City, Missouri couple wanted their “mini modern house” to feel like a real space, so they spent thousands of hours throughout 2020 perfecting every last detail of the three-story, 13-room miniature home, working in 1 to 12 (inches) scale. Using tiny tools, they handcrafted the components as true to life as possible, often using real materials like wood, tile, mortar, and concrete, as would be appropriate for the full-scale versions.

Kampfe was inspired by the house she grew up in, which her parents built in Omaha, Nebraska. She spent a lot of time searching for just the right pieces to put inside the miniature, which all had to be midcentury modern in style. Most of it is vintage and German in origin, but some came from contemporary artists and craftspeople she found online. She even sourced a few pieces from her childhood home, including cork wallpaper her parents had hanging in their den.

Each room of the dollhouse is a marvel, with a lot to take in. The possessions are perfectly disheveled, as if the miniature occupants just stepped out. In the living room, which Kampfe floored with wood in a parquet pattern, there are tiny paintings, candlesticks, books, liquor bottles, drinking glasses, and textiles she needlepointed herself. The house is wired for electricity, too, so the lamps (custom-made by a friend) all work. 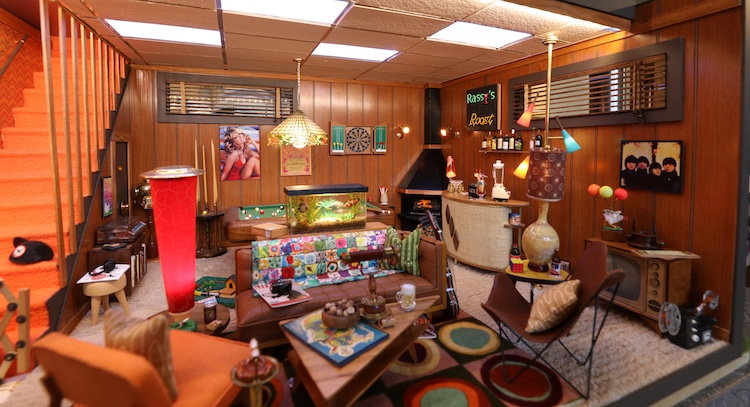 Before the pandemic began, the couple did a lot of traveling, allowing them to pick up miniatures from cities like Atlanta, Maine, New York, and Paris for the home. The tiger-shaped rug in the master bedroom, found in a local store, is the piece that started the whole project. “It intrigued me because I’m a lifelong needlepointer,” she told Today. “I asked the gal who owned the shop what it was used for, and she said, ‘Annie, I think it’s meant to be a dollhouse rug.’”

My mom and step-dad have spent the better part of quarantine building what they call their "Mini Modern House."

It is, quite literally, a miniature marvel, and the world needs to see it.

Fully built and designed from scratch, the MMH comes with…

In January, when the home was more or less complete, Kampfe’s son posted about the project on Twitter, and interest in their design soon exploded across the internet. Since then, they’ve continued to modify and refine the dollhouse, adding a basement level with a functional garage door. They offer close-up views and details on each space on Instagram @minimoderndollhouse. 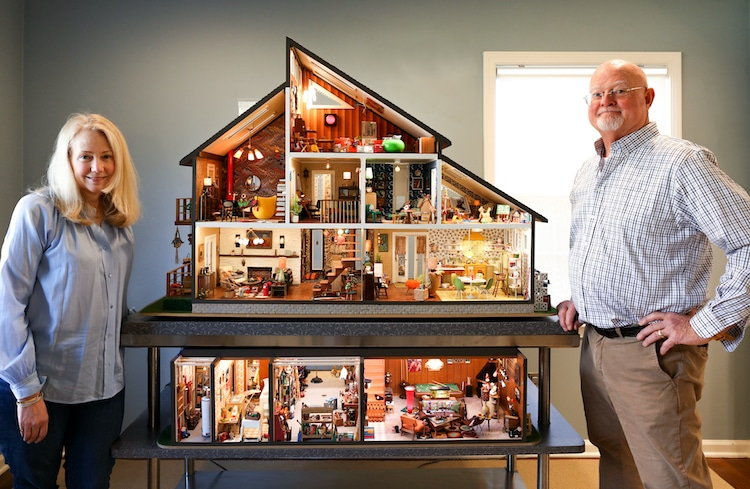 “We had no idea Scott was going to put those photos on his Twitter,” Kampfe told Today. “I thought he was teasing me — he was like, ‘Mom, you’re going viral.’ I’m like, ‘What are you talking about?’ We don’t necessarily love all the attention we’re getting, but I love the joy and happiness that this little miniature world has brought to a lot of people. It’s just been so humbling that something we’ve enjoyed so much made people happy.”