When commissioned to design public toilets along a popular hiking trail, architecture studio Kengo Kuma and Associates took inspiration from the majestic mountain view behind them. 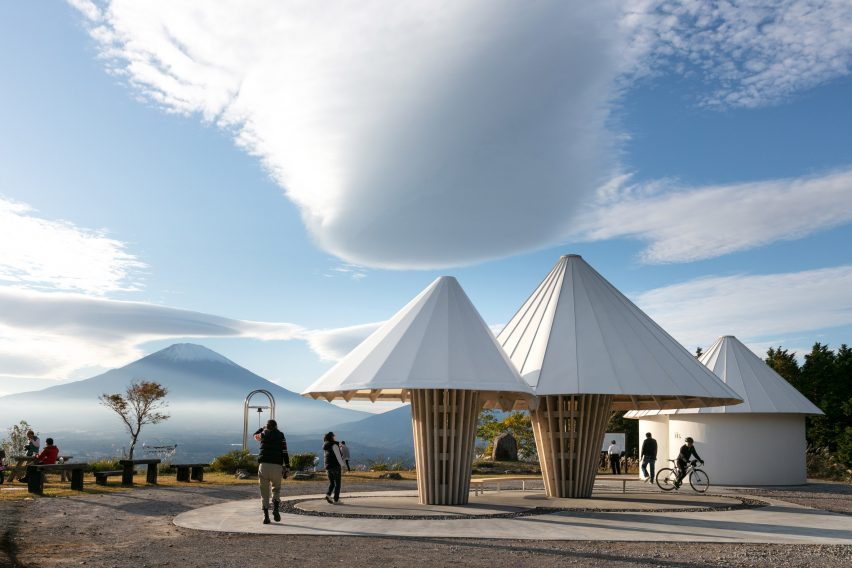 “We designed an umbrella-shaped eastern house and toilet that resonate with the shape of Mt. Fuji in the observation park on the hillside of the Kintaro Fujimi Line, which is famous as a sanctuary for hikers,” the company website explains. 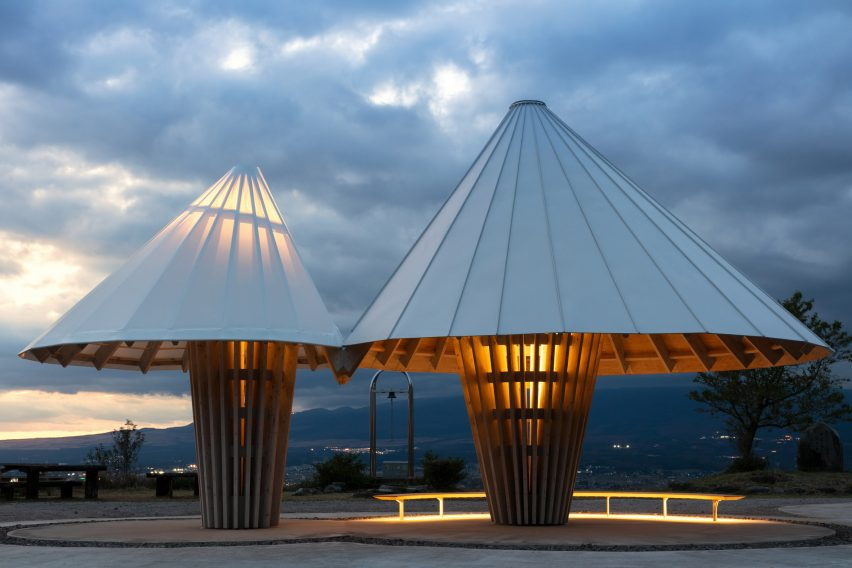 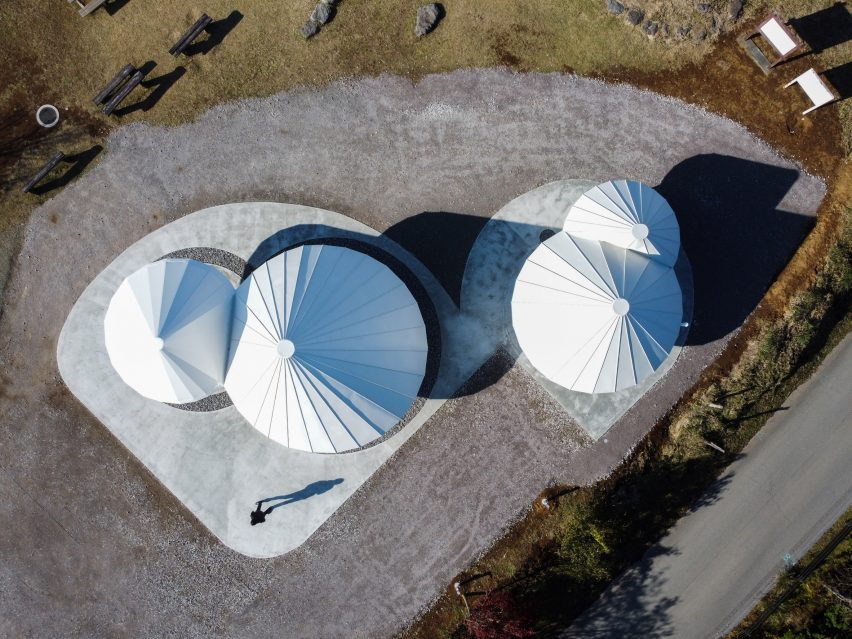 Located in Oath Hill Park, a rest area on the oustskirts of Oyama, Japan, the “eastern house” is a pair of cone-shaped structures with interlocking roofs that provide shade and a bench to weary hikers at the observation deck. The wooden columns that hold up the house are held together with a ring-shaped iron plate, and the whole configuration is left exposed for visitors to touch and admire. The tented roofs were informed by the ridgeline of Mt. Fuji, with one topped by a translucent material and the other covered in an opaque white covering treated with fluorine to make it weatherproof. 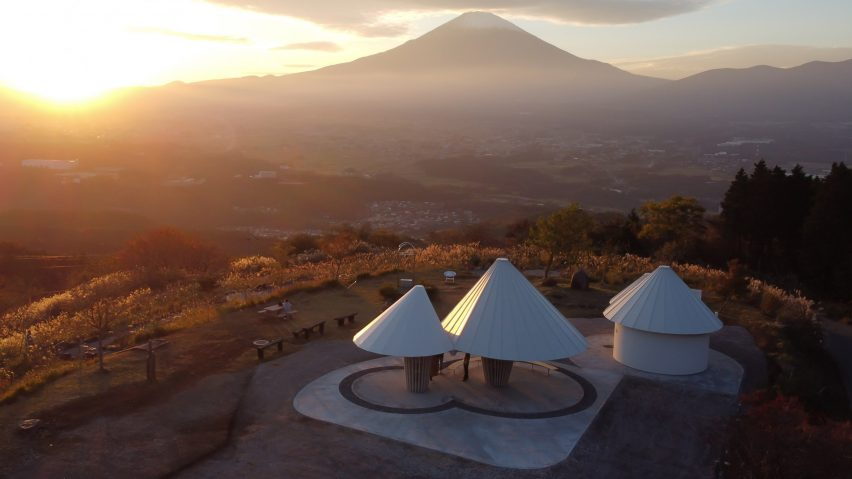 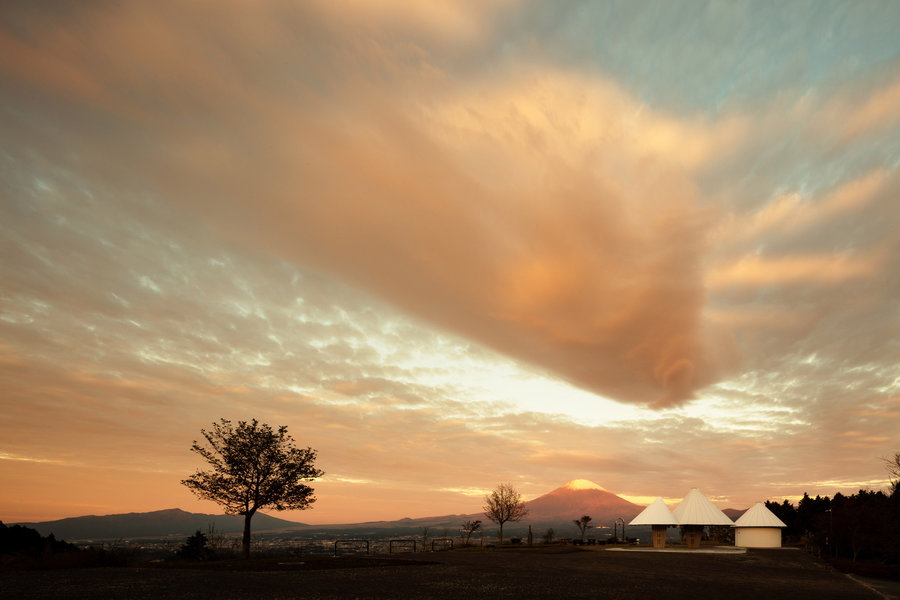 “By combining the flexibility of wood, the strength of iron, and the lightness of the film, a warm and open eastern house was realized,” the studio says, adding that “At night the silhouette of the wooden structure emerges in the woods.”

The toilet building sits adjacent to the eastern house, itself wrapped in thick, white cylindrical walls. The roofs of the two connected spaces are also interlinked and covered in the same opaque material as the shade structure. 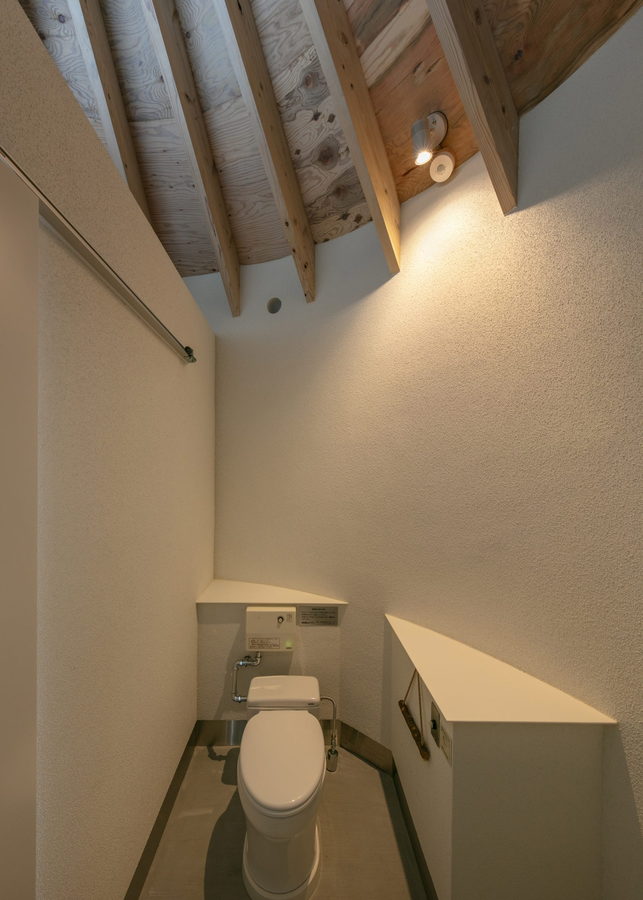 With their white-capped roofs and conical forms, the buildings become mini versions of Mt. Fuji. The imposing mountain can even be perfectly centered between them at a certain angle for a stunning picture-perfect vista. The new toilets were officially opened to the public in October 2021.

These aren’t the only nature-blending toilets Kengo Kuma has created. A few months earlier, in June 2021, the firm unveiled a “toilet village” in Shoto Park. Camouflaged by cedar board louvers, the structures’ randomly-skewed lines of wood create a fun forest feel. 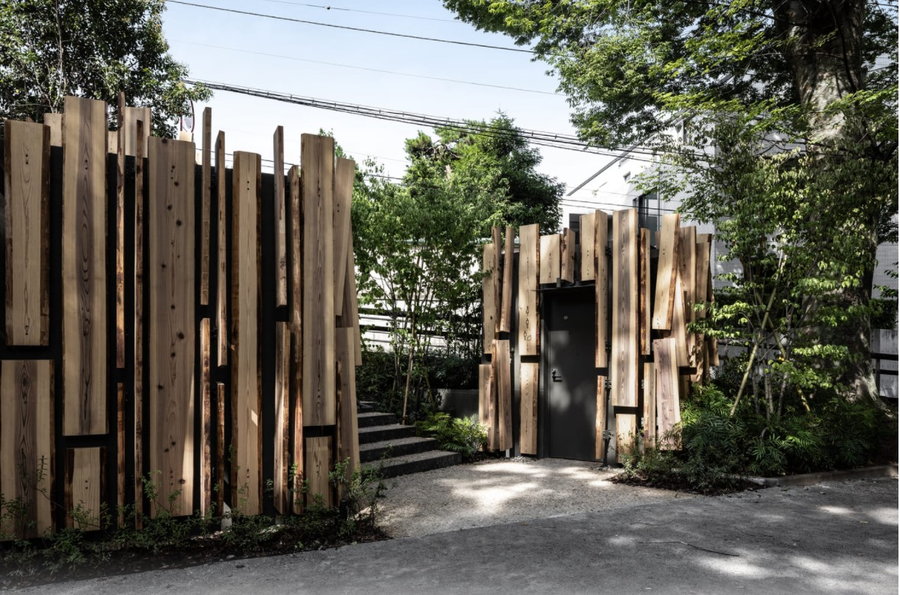 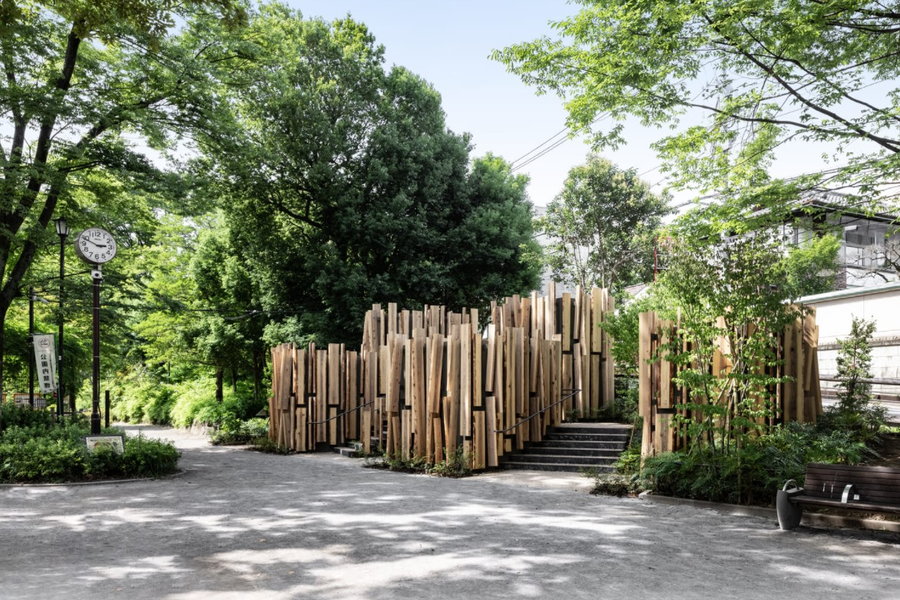 “The plans, equipment, and interiors of each toilet that makes up the village are different to meet various needs (child-rearing, grooming, wheelchairs, etc.),” the Kengo Kuma website explains. “By splitting the various private rooms into separate buildings, a well-ventilated, walk-through ‘public toilet village’ was created in the park, which was suitable for the post-corona era. The era of diversity and the era of forests have arrived for toilets.”

The Shoto Park toilets were Kengo Kuma’s contribution to the Nippon Foundation’s Tokyo Toilet Project, an initiative to bring 17 updated and design-minded public restrooms to the city ahead of the 2020 Olympics. The architecture company also designed the cedar-planked Japan National Stadium for the Games. 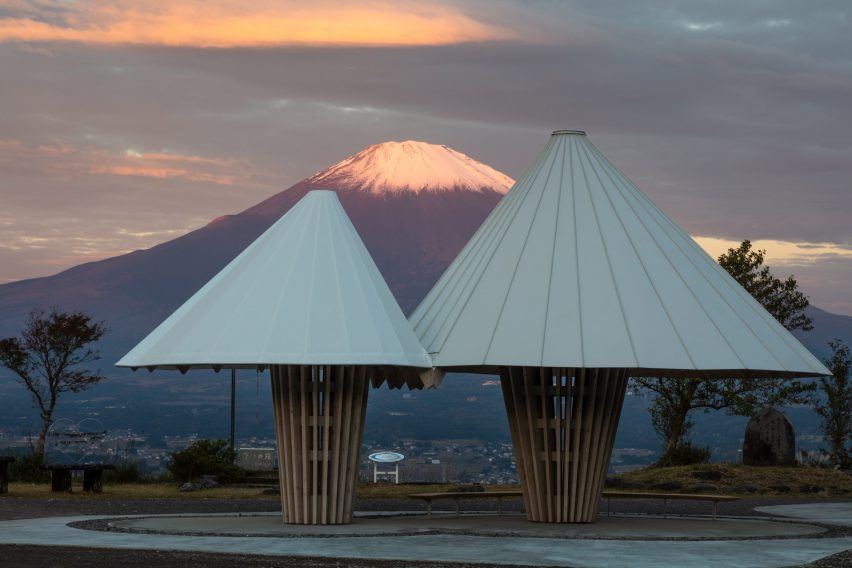 Kengo Kuma & Associates was established by Kuma in 1990, himself known for his eye for “architecture that opens up a new relationship between nature, technology, and humans.” The studio currently has projects underway in 30 countries, including one in France to add a contemporary, sculptural stone entrance to an ancient gothic cathedral.