Imagine having your very own eight-story penthouse within the copper crown of one of New York City’s landmark skyscrapers. That’s exactly what one lucky buyer will find at “The Pinnacle,” a 9,680-square-foot home located in the crown of the Woolworth Building at 2 Park Place. Created as part of a larger project converting the tower into residences, the penthouse spans floors 50 to 58 and boasts its own 408-square-foot private terrace overlooking the city. 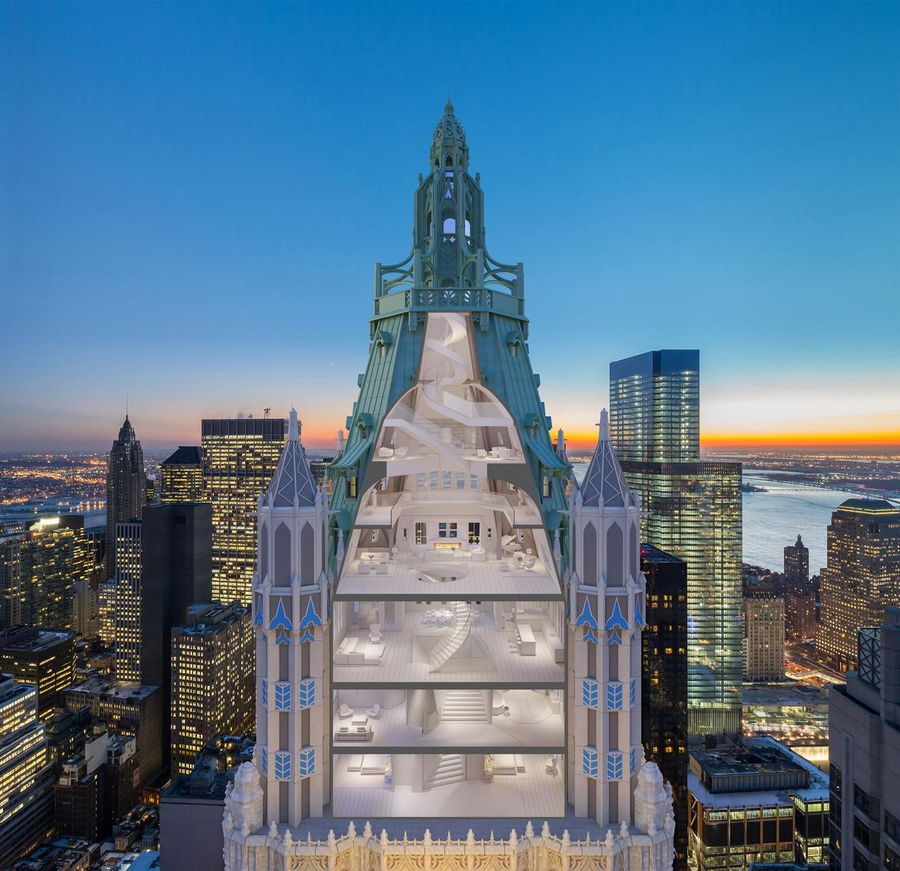 When the Woolworth Building was first built in 1912, it was the tallest in the world. Now, it’s been eclipsed by many others throughout the city, from the Empire State Building (1931) to One World Trade Center (2014), but it remains one of the city’s most iconic structures. With a price tag of $79 million, its penthouse far eclipses other luxury condominiums in the building, which average around $25 million, but it’s easy to see why, especially with these views.

Designed by award-winning architect David Hotson, The Pinnacle is certainly unique, partially because of its unusual shape. Before Hotson came on board, real estate developer Ken Horn had a hard time figuring out how to market the enormous cylindrical space, which itself is surrounded by four turrets. 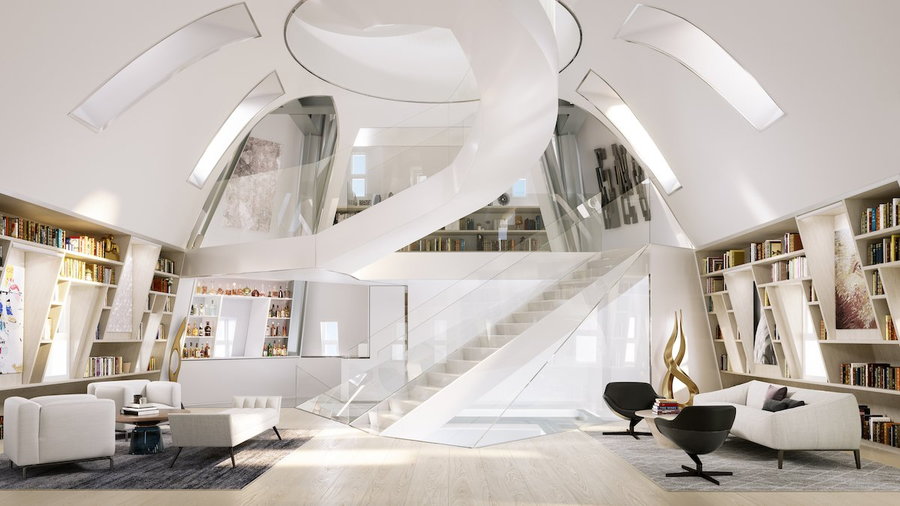 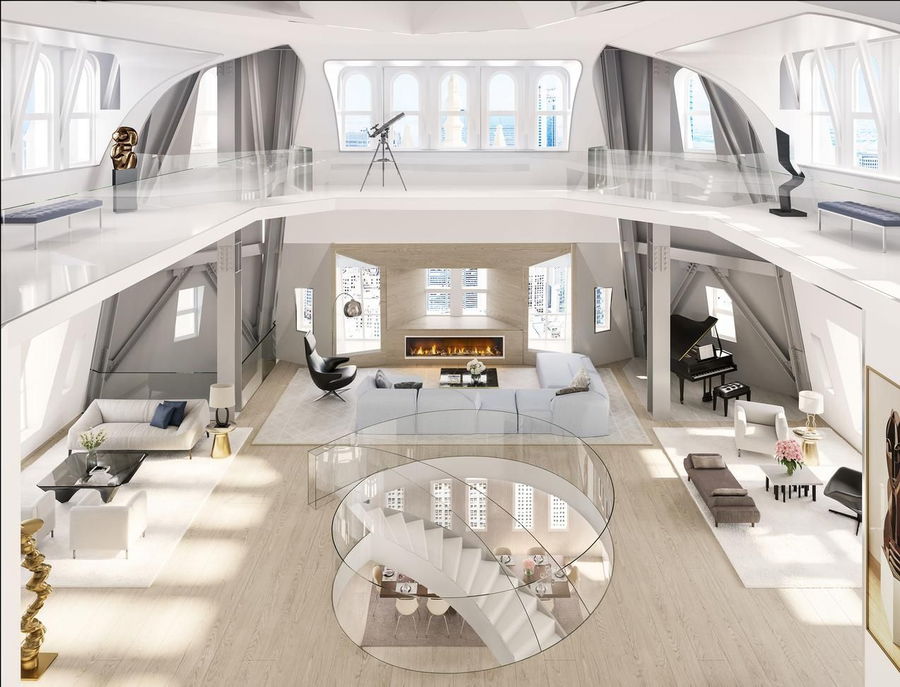 Originally pricing it at $110 million, Horn lowered the price to $79 million and tapped Hotson to create renderings for the penthouse so buyers could imagine what it might be like to live inside. Hotson is famous for making magic out of odd and quirky spaces like “Skyhouse,” another awkwardly laid-out penthouse in Manhattan.

A recent article in The Wall Street Journal explains that “one prospective buyer wanted to turn it into an enormous one-bedroom bachelor pad. Another wanted to install a small office on a hydraulic lift so that, by pressing a button, he could raise himself up to the level of the observation deck while he worked. One architect wanted to designate some of the space as cold storage, so owners could stash their fur coats. ‘Even architects couldn’t necessarily conceive of the space,’ Mr. Horn said. ‘We realized this is way too complicated for 80 percent of the people who are going to see it.’” 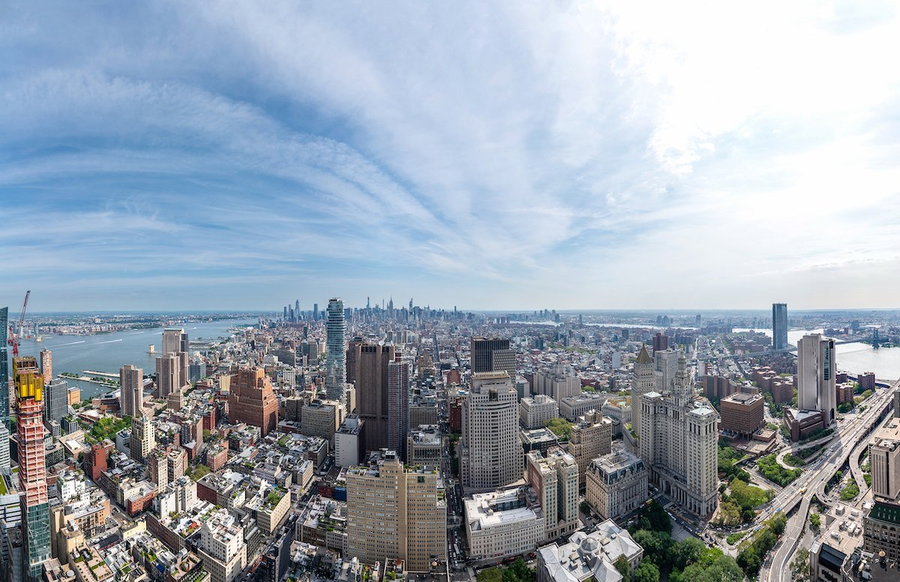 “[Hotson’s] concept for the penthouse calls for a large two-story yacht-like living room with a 360-degree mezzanine level reminiscent of the upper deck of a ship, a separate quirky library level with a collection of scattered windows situated both at eye level and overhead, and a central staircase that would allow the owner to peer down from the main level of the penthouse to the lower levels.” 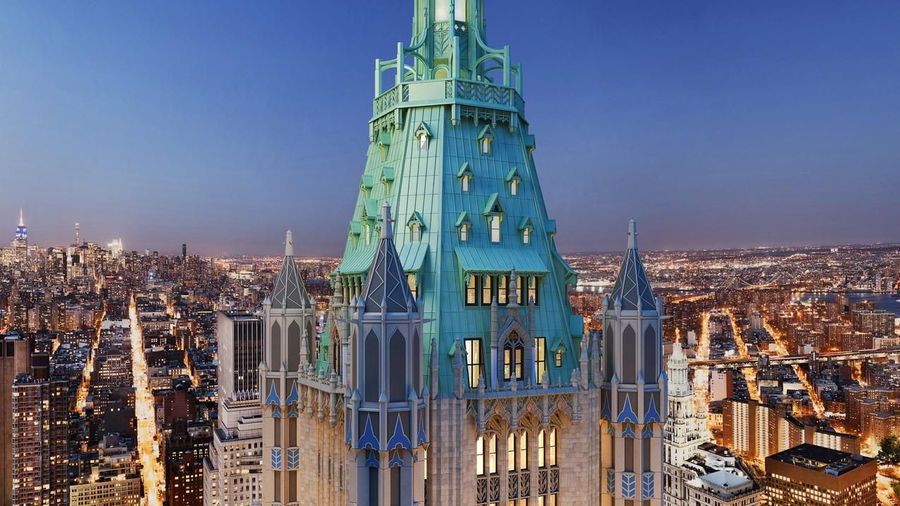 The Pinnacle has been sitting on the market since 2017 as a result of a cooling period in the New York City luxury market. Sales of the other units have picked up since the renovations were completed, however, since buyers could actually tour the finished apartments. Over 30 percent of the building’s 32 units are now sold or in contract, but The Pinnacle is still waiting for just the right billionaire to come along and snatch it up.