Many of us can relate to the feeling of being so constrained by traffic that we imagine ourselves flying over it all in a magical vehicle and arriving at our destination without the stress of congestion. It may seem incredulous, but that daydream will become a real option within the next few years, and some big players in the aviation industry are working hard to make it happen.

At the forefront is A³, a Silicon Valley subsidiary of Airbus, and their urban aircraft, the Vahana. The company chose to establish itself in Silicon Valley to take advantage of the speed of innovation and tolerance for risk-taking that exist in the area — factors that allow A³ to iterate much faster than its parent company.

During an interview at LA CoMotion last month themed “Highway in the Sky: Is Air Transport the Answer to Our Urban Congestion Woes?,” A³ CEO Rodin Lyasoff spoke in a subdued but positive tone about the high-minded activities going on at his company.

“We have a flying taxi,” he explained. “It’s a tilt wing, which means that it takes off and lands vertically, but in forward flight it’s essentially an airplane, which makes it a lot quieter and actually gives it a meaningful range with batteries.” 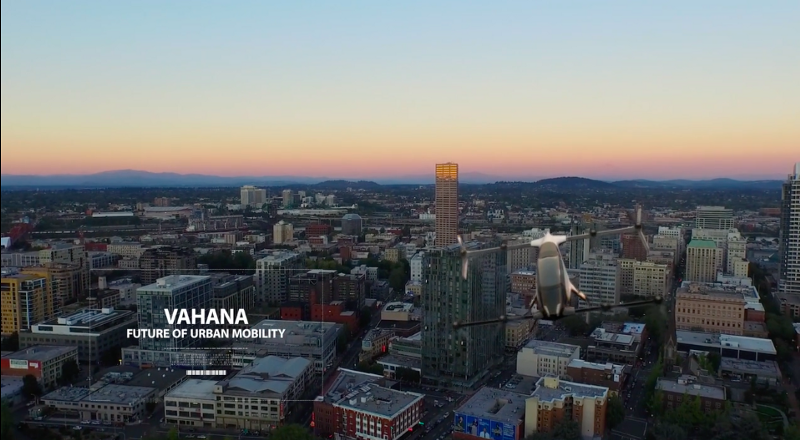 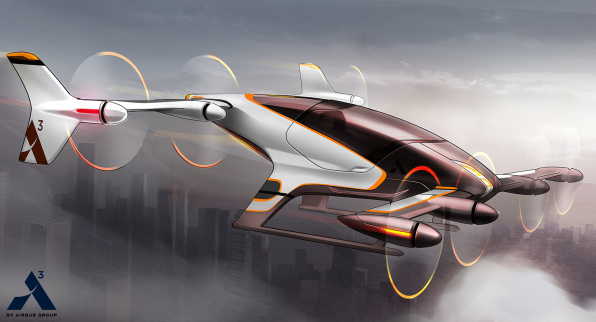 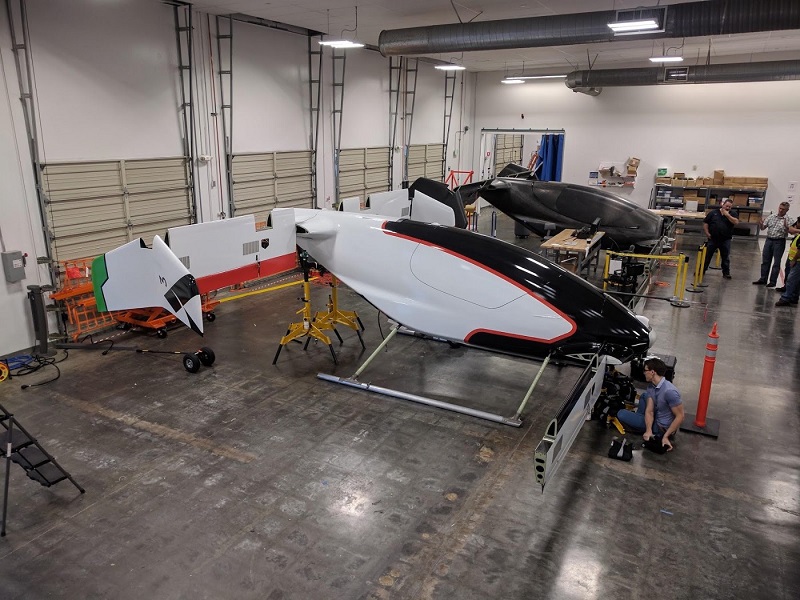 “Vahana”  is a VTOL aircraft, meaning it can hover, take off, and land vertically. It will take 90 seconds to hover up to the maximum cruising altitude of 1000 feet and transition to horizontal motion, then another 90 seconds to hover down to a particular destination. It is fully autonomous and features no manual controls. Eight electric rotors make Vahana aerodynamically superior to most helicopters.

“The project’s not even two years old, and our first full-sized, fully autonomous vehicles are already doing final testing before flight,” says Lyasoff. “And they will fly within the next couple of months.”

There are several other companies testing similar flying vehicles. For instance, Boeing recently acquired Aurora Flight Sciences Corp. and will provide UberAIR with 50 air taxis to test by 2020. Despite the competition, none offer both the VTOL flexibility and autonomy of Vahana. Plus, Vahana’s form language (and especially its canopy), make commuters want to use it over other services.

Of course, showing the public glossy renderings and videos is not as powerful as showing them a real-world demonstration. In São Paulo, A³ launched Voom, an air taxi mobile app that lets users hire a helicopter from one of six helipad locations throughout the city. According to its website, by using Voom, “you can travel from downtown to the airport for about the price of a private car.” Voom, which does not own or pilot any of the helicopters, simply connects people to certified operators in the area. It even offers a few ground transportation connections. 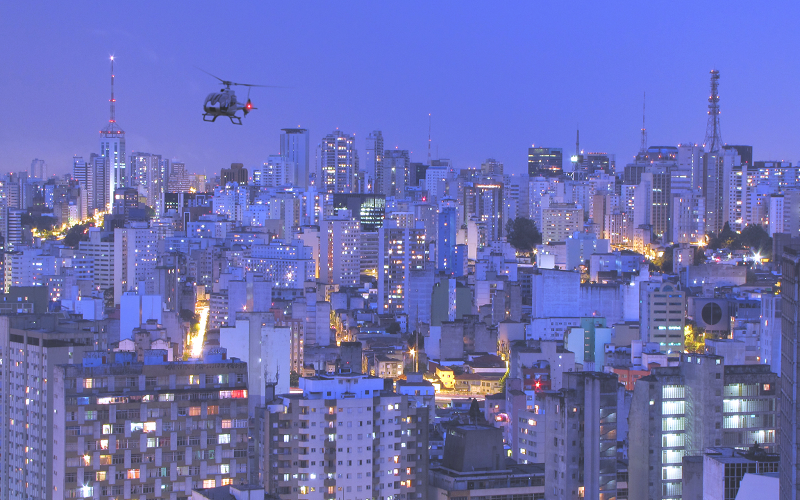 “We recognized that operations on the ground (and regulation) for some of these vehicles will be a challenge…this (Voom) gives us the footprint on the ground with current vehicles.”

It’s important to note that the biggest challenge to urban air mobility is not the technology, but the regulation. Lyasoff believes that figuring out how these aircrafts could operate while minimizing their energy consumption, cost, and noise footprint are questions that became easier to answer with the advent of the iPhone. He gave a brief description of how we got to flying taxis so quickly:

“Batteries finally got to good enough energy densities that you can actually do something useful with just batteries. You could go across an average metropolitan area. You could go 100 kilometers. Once that was possible, we could do distributed electric propulsion, which meant that you don’t have to push power to the propellers using mechanical gear boxes and shafts, and that all of a sudden makes them a lot lighter. And it allows you to have levels of redundancy that you couldn’t do before, which means that you can actually make them safer. And we could achieve that safety at a lower cost. But then they do require a degree of autonomy that traditional vehicles hadn’t required because they are so many actuators that a single pilot couldn’t directly control. A lot of that was enabled by the iPhone, because a lot of the sensors that we in the aviation industry developed, like accelerometers, GPS…(the iPhone) took them and commoditized them on a scale that was completed unprecedented in the aviation industry. I think that’s what actually miniaturized (batteries), lowered the cost, improved the performance, and enabled drones. And it really got people thinking about what’s possible and it became less of a black magic and more accessible.”

For now, Vahana needs to be tested so that regulators can approve of its use in urban environments. Luckily, it seems like A³ already has an idea of how to cross that looming threshold of bureaucracy.

“The main challenge is that regulators track innovation, but they track it with a latency that is prohibitive to deployment. You have to solve this very complex problem of implementing a policy, and in the case of airspace flight rules, you don’t really know how they are going to work until you deploy them.”

What A³ did was create Altiscope: a tool that allows regulators to simulate the experience of air taxis in real-time, both alongside and hovering below existing air traffic. It’s a way for the regulatory process to be enhanced and sped up while the actual vehicle is being tested.

“It will show you in real-time what your policy will look like when implemented. That’s our attempt to enable regulators to engage better with technology innovators and at the same time dry run their decisions before they deploy them to shorten that time and close that feedback loop.”

With Vahana about to undergo flight testing, and A³ helping regulators approve of urban air mobility, how long will it take for our traffic daydream to become a viable and safe option? Lyasoff is sure it won’t be long.

“I think in five or six years, it is feasible to have some of these vehicles fully certified and operating commercially. We can make them safe today, but we have really high standards for what it takes to make a safe airplane that we trust to sit inside and to fly overhead…I believe that Airbus is well positioned in this space, because there aren’t that many companies that know how to do that and know how to build a manufacturing process around that.”