A recently restored home in Spain is hanging on to a few of its scars after being forgotten and water damaged for years on end.

Situated along a narrow street in the coastal town of Arenys de Mar, this three-story house has faced some significant challenges over the years. For starters, it had been forgotten by the municipal planning in the latest update, standing as a ghost of a former city plan. Then the owner’s tenant had to abandon the space to move to a nursing home, leaving it totally vacant for over a year. To top it off, leaks in the roof allowed water to filter through the three stories during this time until it all but destroyed the first floor’s wooden structure. 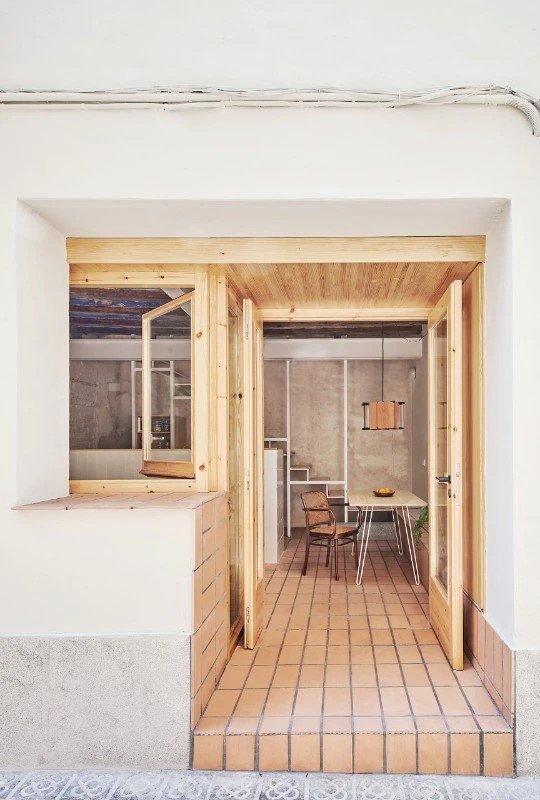 When the architects of Barcelona-based Twobo studio took on the refurbishment of the five-by-five meter home, they actually let these damages guide their design process. 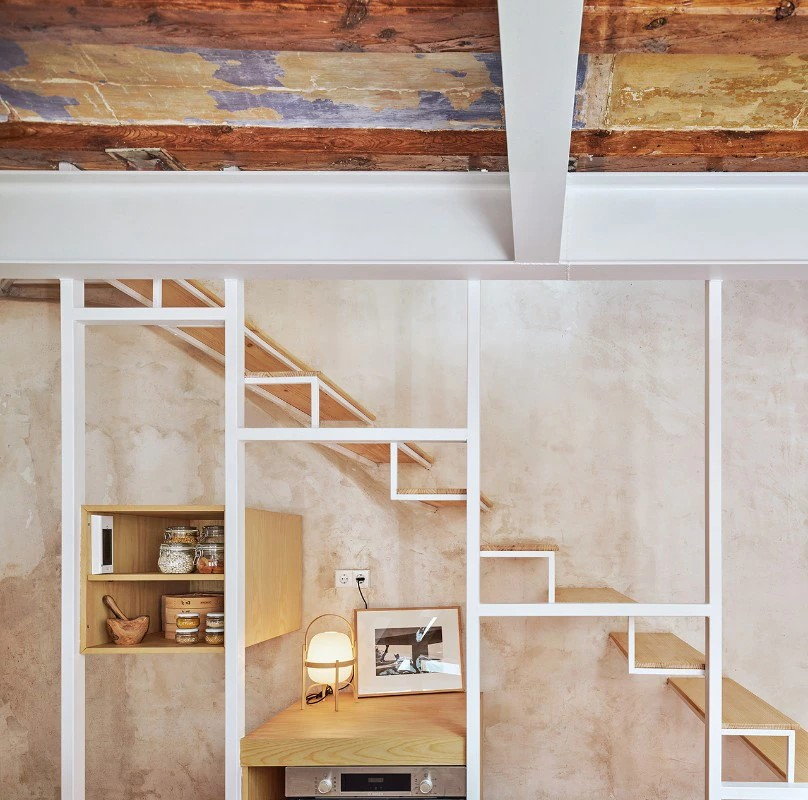 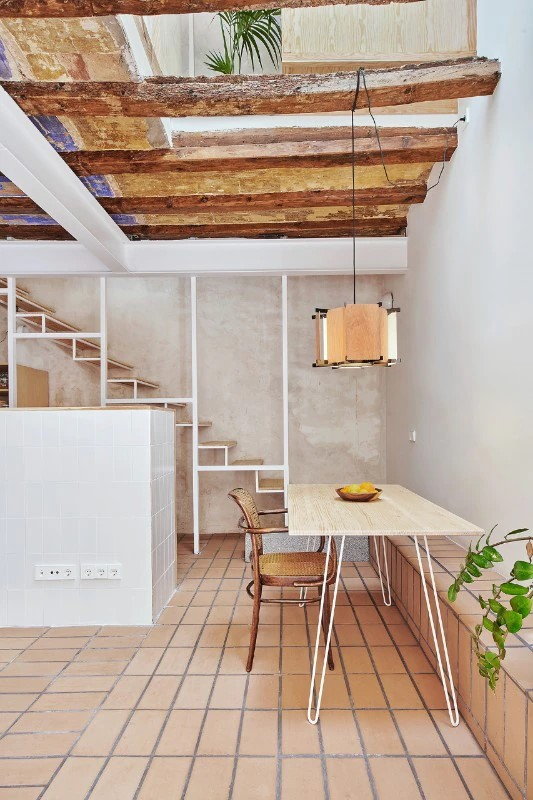 “The water paved the way for us,” the team explains. “Sunlight filtered through the hole left by the collapse of the structure. Could it be that the solution for this small house was precisely to ‘lose’ more meters?”

The tall, skinny dwelling shares walls on three sides with other buildings, with the front facade opening onto a street less than 10 feet wide with almost no sidewalk. Adding a skylight on the third floor and expanding each stairwell allowed in more light, helping the roughly 256 square feet of each floor feel bigger than it really is. The ground floor also got boost of sunlight when the Twobo architects punched out a larger hole in the facade, lining the entire entry with oversize windows and creating a threshold that “transforms the street into part of the house.” 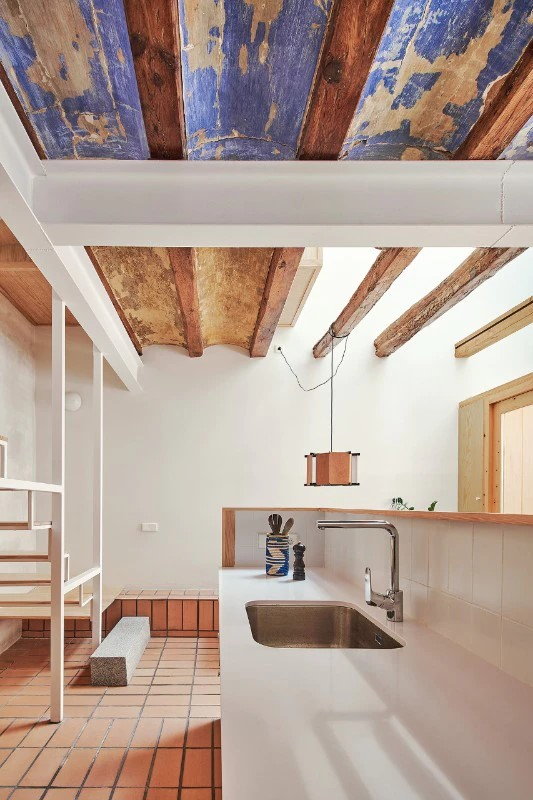 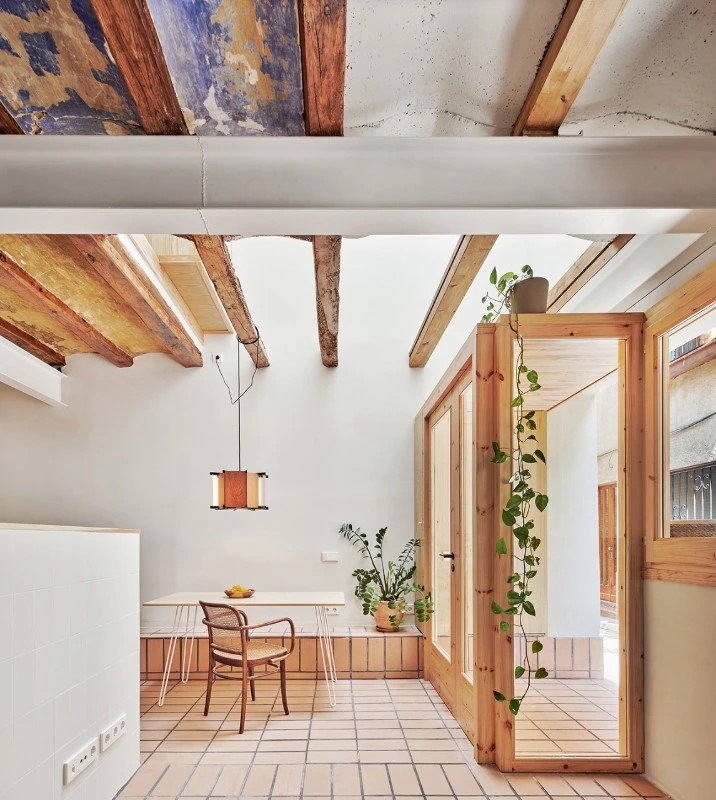 Next came the addition of other permanent features. A compact kitchen was installed on the lower level, with room for cooking essentials and a table with a room-wide tiled-bench that forms a banquette. The existing ceiling beams were left exposed in here to show off all their aged and well-worn glory. Patches of a former blue paint also retain their spot of honor on the ceiling as a nod to the home’s long history.

A sink was added on the second floor and the water closet was cleverly hidden in what looks like a large set of cupboards. The rest of the space on that level houses a full-size bed near a window overlooking the street. Above that, the third floor is reserved for storage, with two oversize wardrobes hung on the wall over the stairwell. The entire home was painted white, with the light, natural wood and tawny floor tiles providing accent color for a fresh and minimalist vibe. 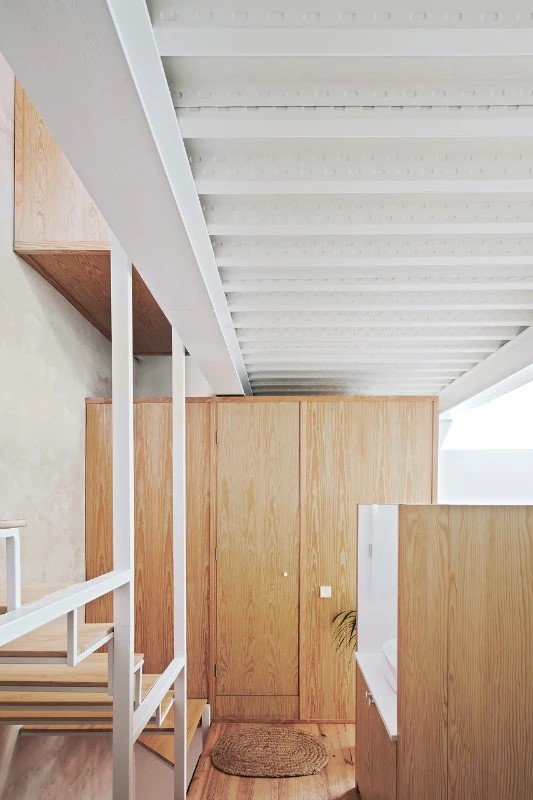 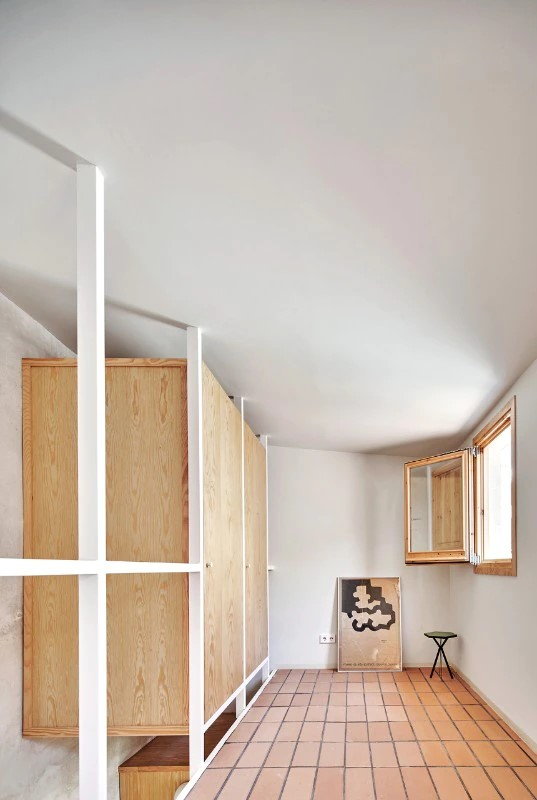 The Twobo architecture studio was formed over a decade ago in Spain by family members Pablo and Alberto Twose and María Pancorbo. Their work has covered technical architecture, interior design services, and landscaping, as well as furniture and fixture design. Their ultimate goal is to find the “apparent simplicity” in each creative project.