A good interior designer is almost like a wizard. They’re not just adding decorative elements as an afterthought to the architecture, like frosting a cake. They’re capable of utterly transforming the way a space feels: its mood, its light and shadows, the flow of movement within it, and even our perception of its size. The tricks that go into that last feat might start with paint colors and how elements like furniture and curtains are placed, but they can go a lot further than that, directing light through the space so that our eyes follow its journey. 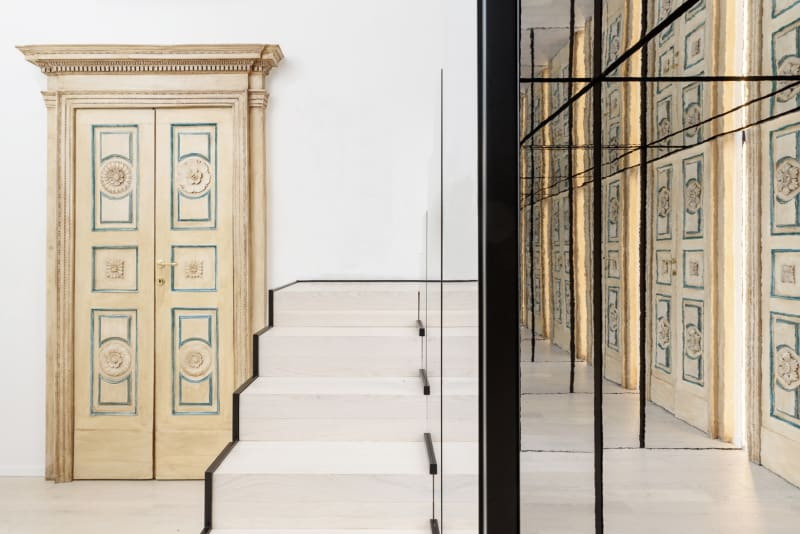 That’s what Cavejastudio and Denara have pulled off with the restoration and renovation of a historic apartment in Cesena, Emilia Romagna, Italy. The home measures a modest 1400 square feet (about 130 square meters), but feels almost palatial in scale thanks to visual tricks cooked up by the designers. Take cues from what they’ve done here, and you might be able to do the same with a much tinier space. 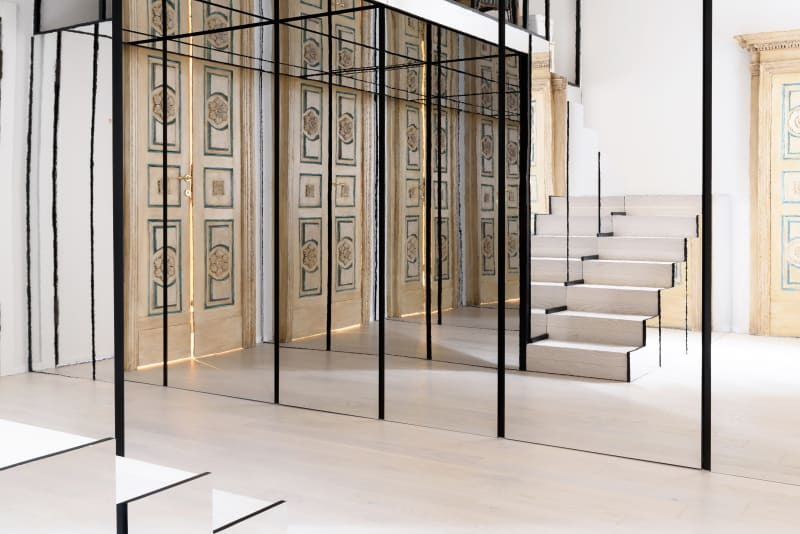 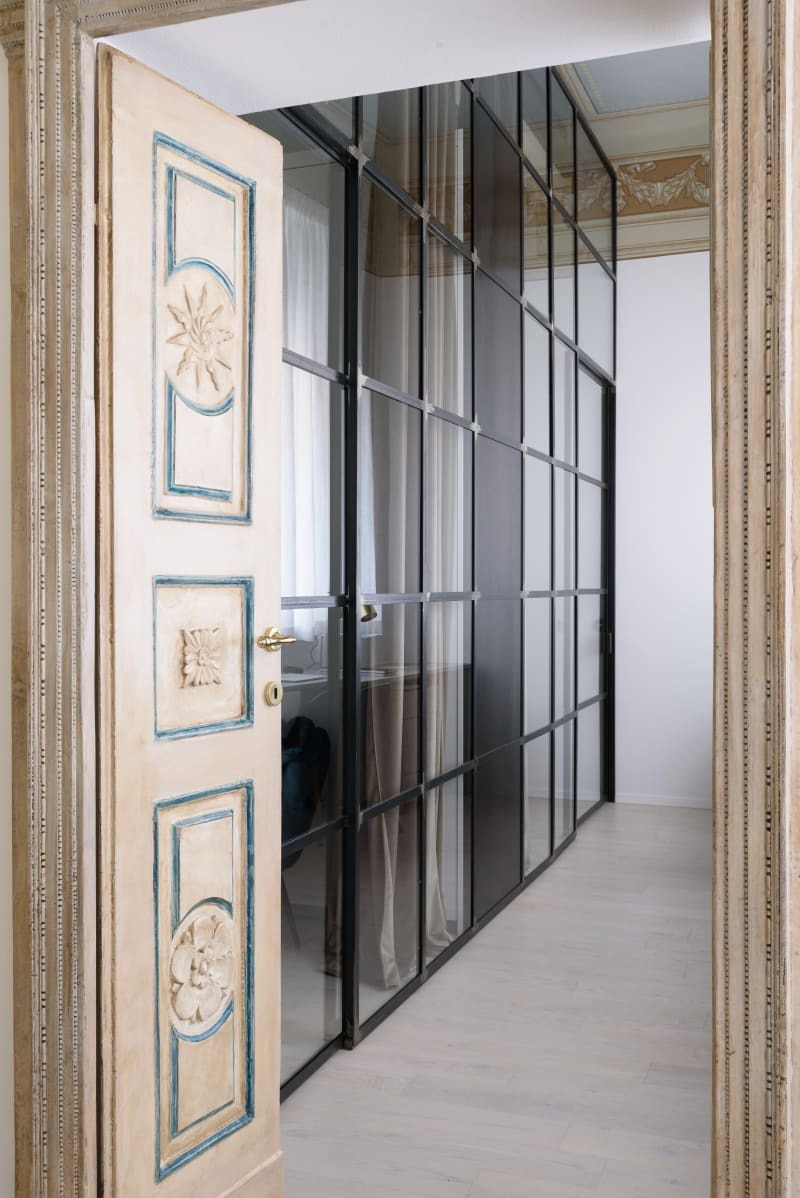 The designers wanted to preserve the historical elements of the flat, which is named “Lelefante.” They maintained the original envelope with its cross-shaped wall system and 12-foot ceilings, but in addition to adding a loft (one of our favorite space-saving design tricks), they also brought in a plethora of mirrored surfaces that manipulate the viewer’s sense of where rooms start and end, “an attempt in the wake of the best Baroque tradition to capture the infinite,” as Cavejastudio explains. 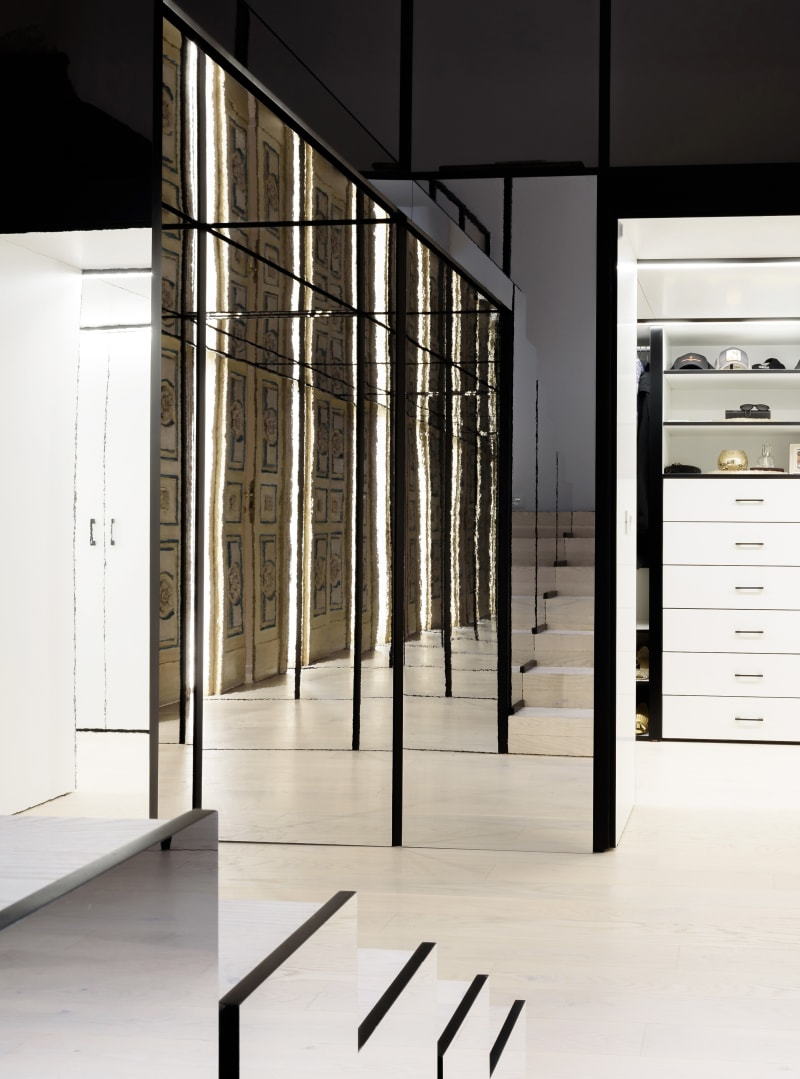 The star of the show is a “technical piece of furniture,” a new built-in element that contains a walk-in closet and pantry and provides the basis for the loft. This element is “covered with mirrored panels interspersed with regular joints that dematerialize their presence, making it light and mysterious, but at the same time capable of reflecting light in the space less naturally illuminated by the sun throughout the floor.”

Even in photos, the effect is remarkable. Despite taking some of the living room area away to create the new closet and pantry, the space feels enormous, visually expanded by the mirrored panels. The room’s most beautiful elements like the gorgeous hand-painted doors are thus multiplied. You almost can’t tell which ones are the real doors and which ones are an illusion. 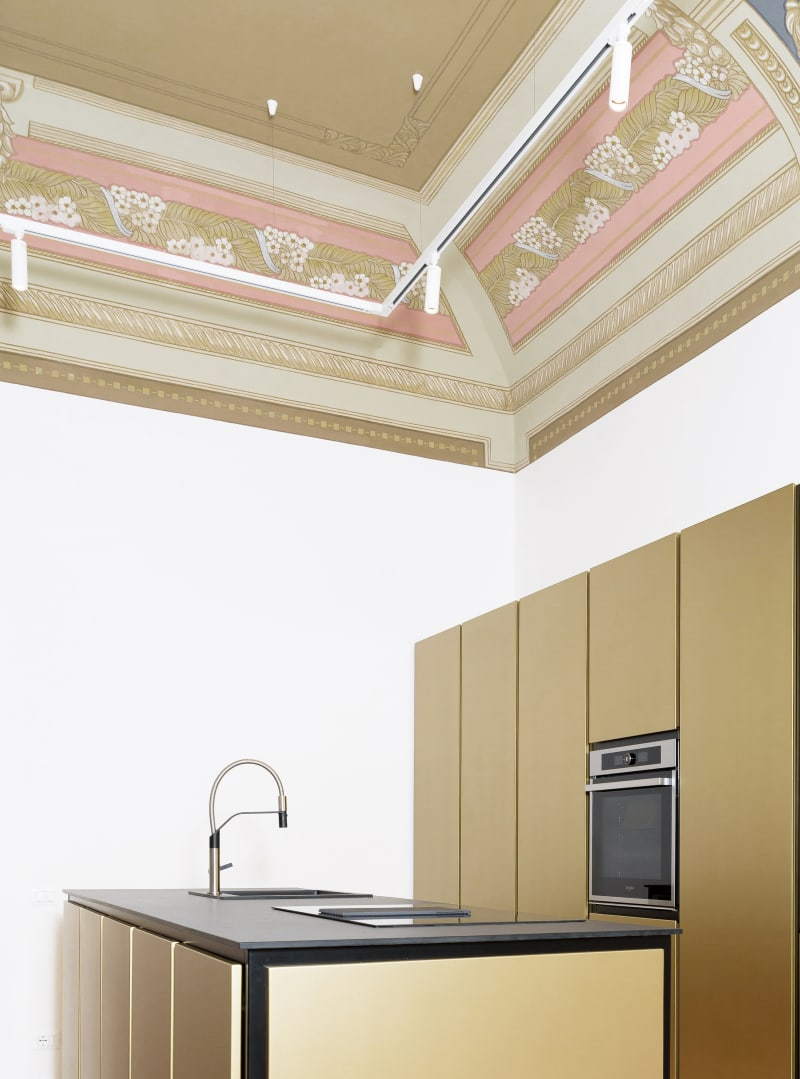 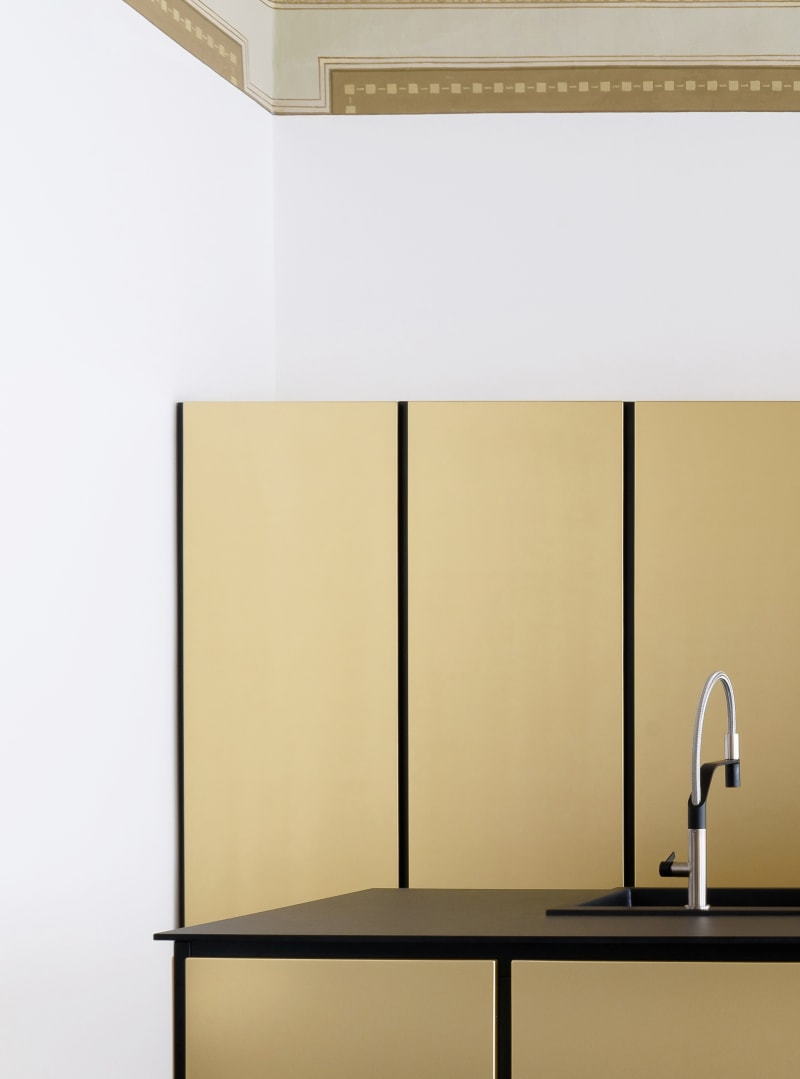 The black frames of the mirrors in the living room are visually repeated in the glass wall separating the bathroom from the bedroom. In the kitchen, frameless cabinetry painted a muted gold achieves a similar minimalist and graphic effect that contrasts beautifully with the soft ornamentation of the original tray ceilings.

“Both in the living room and in the respective bedrooms, it is the furniture itself that becomes the spatial regulating devices; in particular, the position of the kitchen block on the platform emphasizes the entrance-living room axis typical of the noble floors, while the wardrobe for the daughters’ bedroom is modeled on the ceiling beams, becoming a divider of the intimate space,” the designers say. 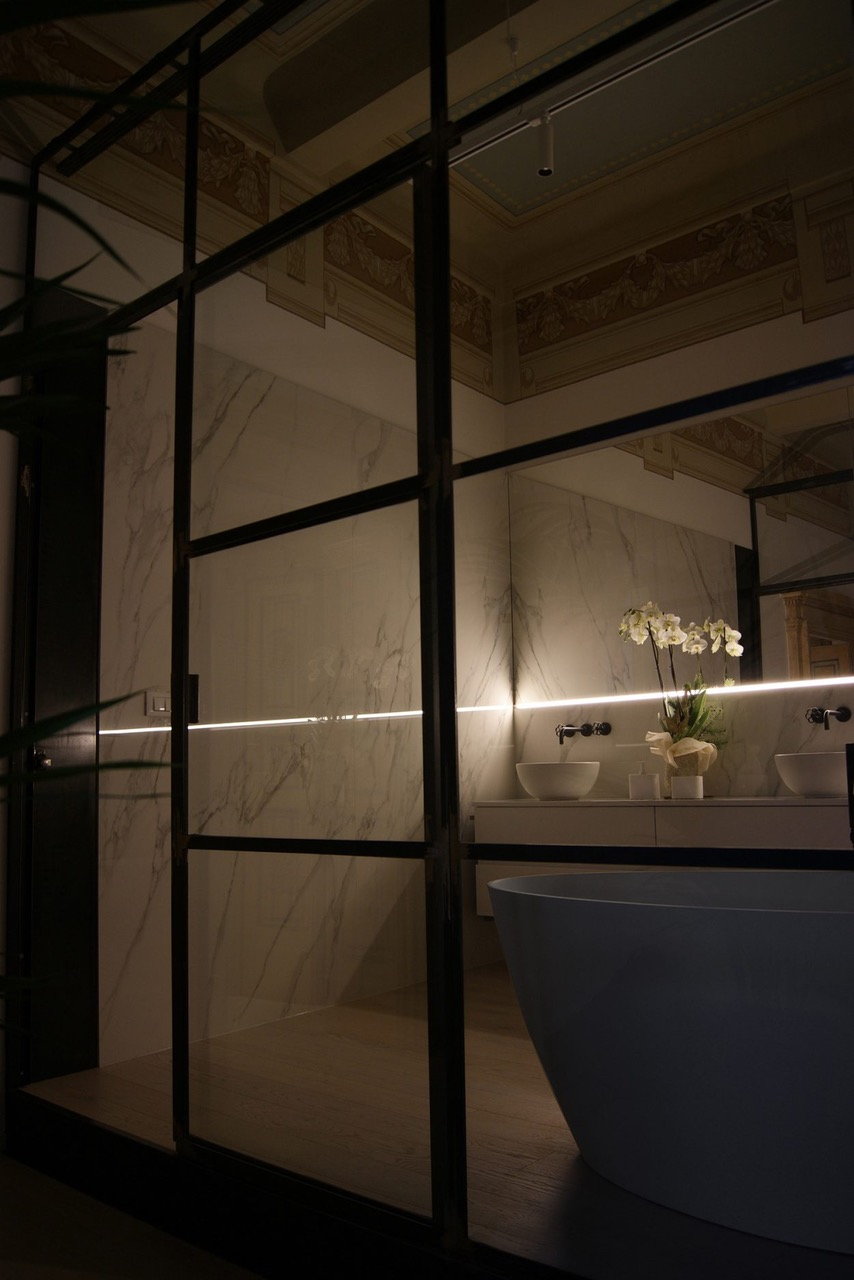 “The chrome plating of the furnishings follows a palette derived from the colors of the existing frescoes, in order to establish a dialogue with them; [this] relationship is taken from the spotlight lighting system which, by illuminating from the bottom upwards, emphasizes and enhances its presence.”