The art market is alive and well—and in some cases, even shattering records. And while some works, like pop artist Andy Warhol’s image of Marilyn Monroe, are firmly cemented in the pop culture ethos; others, like the recently sold The Sugar Shack painting by former footballer Ernie Barnes, are culturally significant, but yet to be recognized by a wider audience. 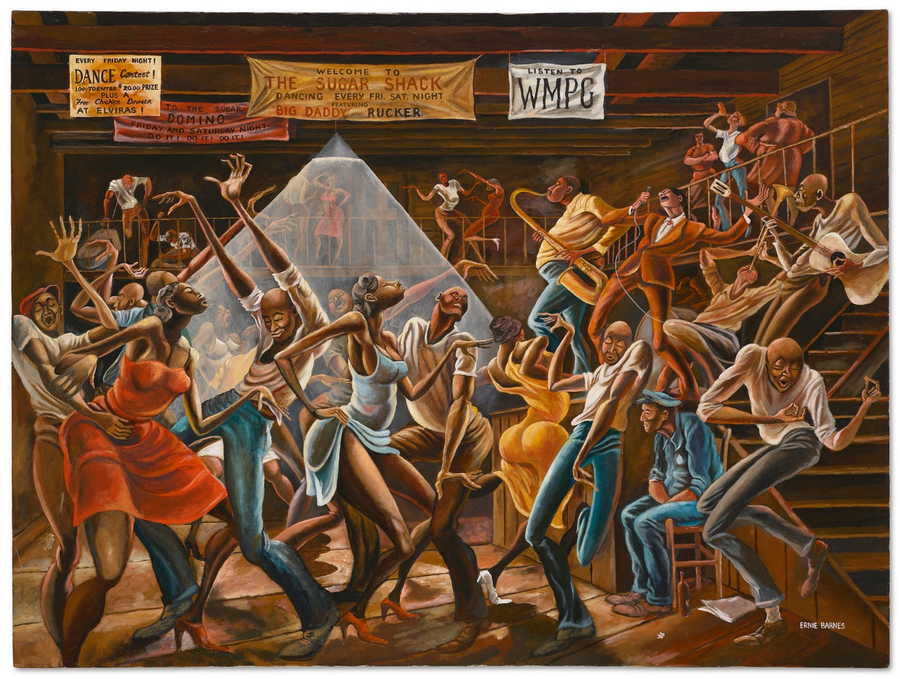 Warhol’s famous painting recently sold for a record-breaking $195 million, but Barnes’ painting set a record of its own—selling at a staggering $15.2 million, approximately 76 times its high estimate, according to USA Today. This is the first time that Barnes’ 1976 work has ever been on display at an evening sale, but not the first time one of his works has sold at Christie’s for a price well above estimate—last November, Ballroom Soul, a similar piece, sold at Christie’s for $550,000, at the time a record-breaker of its own.

Many experts speculate that the high price tag garnered for The Sugar Shack could be due to a variety of factors, as Emily Kaplan, co-head of the 20th century evening sale at Christie’s, said in a statement, “[The Sugar Shack] was really part of the cultural consciousness in a way that no other Ernie Barnes painting was.” She notes that this is perhaps due to a new recognition and appreciation for the paintings, recently featured in an exhibition at the California African American Museum.

Additionally, the painting does have its own pop culture oeuvre, as it famously featured in the opening screenshots of the 1970s sitcom Good Times. Barnes himself also appeared in the show, and also has the distinction of painting all of the artwork that was used in the series. But that’s not all: the painting was also used as the cover of music legend Marvin Gaye’s 14th studio album I Want You, released in 1976. For their part, Christie’s acknowledged the upward trajectory and value of Barnes’ work, and the potential for widespread recognition due (in part) to its connection with the popular sitcom and iconic Motown superstar, “It’s definitely safe to say that [the album cover and show] added to the cultural recognition and resonance of the image,” Kaplan said.

However, there is, perhaps, an even more culturally significant reason for the painting’s record-breaking sale at Christie’s—an increasingly strong market for artists of color, which could signal, as Kaplan suggests, “a real validation” for these often woefully underrepresented creators, a way to “[shine] light on incredible and undervalued artists.”

The Sugar Shack was purchased by hedge fund manager and poker player Bill Perkins, who was delighted with the special painting, saying on Instagram that it was “a childhood dream come true.” The day after Perkins’ purchase, the run on Barnes’ work continued at Christie’s with yet another sale; this time, the piece, entitled “Storm Dance”, was purchased for $2.34 million, again rocketing past previous estimates of $100,000 to $150,000, a spokesperson for the auction house said.

The record-breaking sale of the Ernie Barnes painting The Sugar Shack placed the iconic painting in the spotlight, capitalizing on both its pop culture roots but also a desire by many to make the art world more inclusive and diverse; placing underrepresented groups like women and artists of color firmly into the collective cultural consciousness and promoting widespread (and much-deserved) recognition. And if The Sugar Shack and its fellow Barnes’ pieces are any indication, the market will only continue to grow—a sign of more good times ahead, and a welcome, long overdue shift in the art world.