This architectural preservation project in the U.S. state of Virginia takes “radical transparency” quite literally, encasing a damaged but historically important building in glass. The Menokin Glass House Project aims to rescue the home of Francis Lightfoot Lee, a signer of the Declaration of Independence, without attempting to make it look as it did when it was first built nearly 250 years ago. 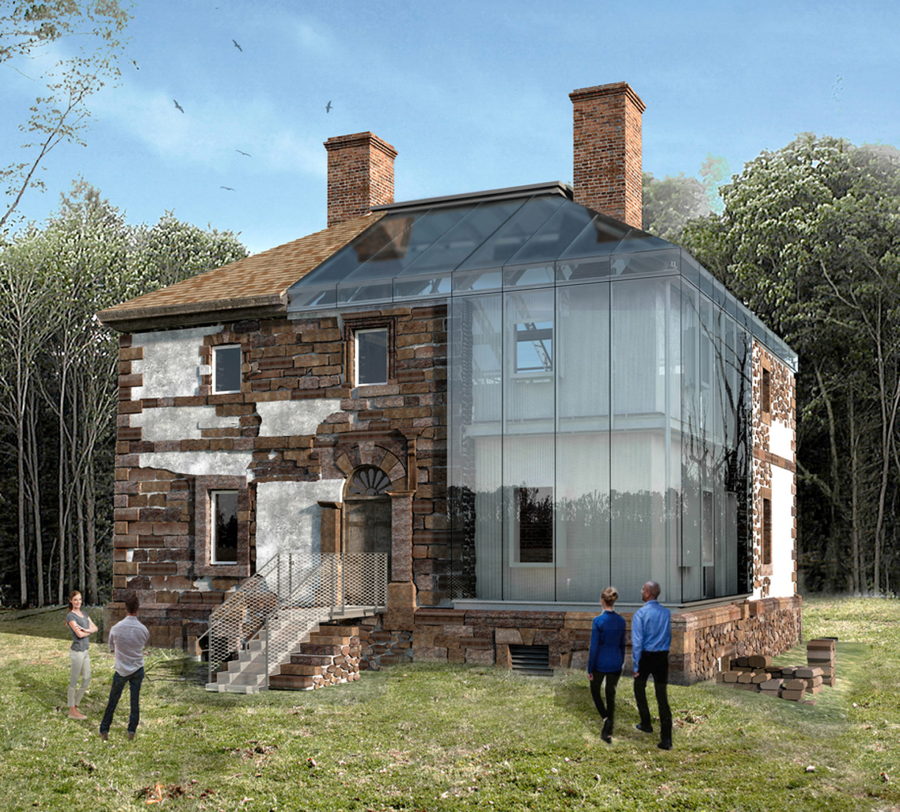 “If you were to reconstruct the house, you’d cover up some of the most interesting parts,” says architectural conservator Matt Webster, a Menokin Foundation Advisory Council Member. “With glass, we can actually see how an 18th-century building comes together.”

The foundation sees this approach as “revolutionary,” connecting the past to the future in “relevant, daring ways.” The Neo-Palladian home, which stands on a 500-acre property, is one of the best-documented 18th-century houses in America. The conservationists had an original presentation drawing dating to 1769, an extensive Historic American Building Survey from 1940 including photography and 20 sheets of drawings, and a number of research reports and historic images to go off while completing the project. 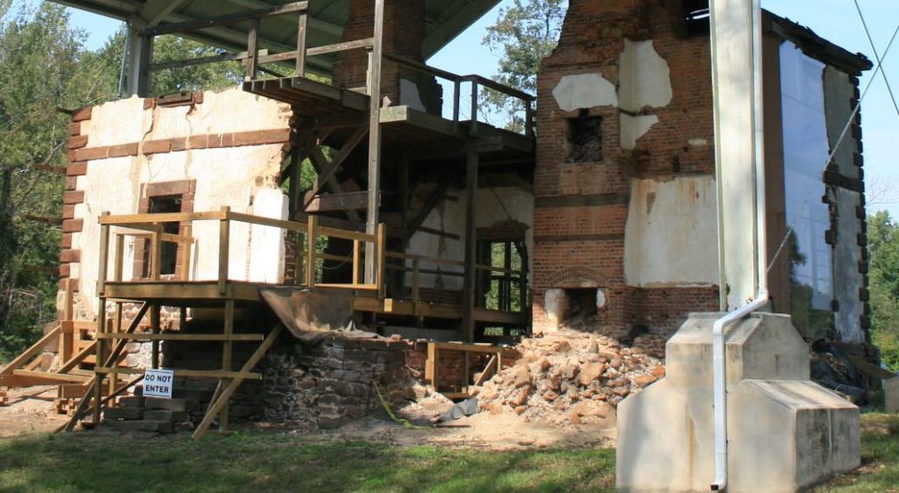 About 80 percent of the mansion’s original materials have survived, including its sandstone exterior and 1,000-plus pieces of intact interior woodwork, but it did start to deteriorate a bit during the 20th century when it fell into a period of neglect. In the 1960s, a tree fell on the house, destroying half of it. The house was pretty much totally in ruins by the time the Menokin Foundation received it in 1995, at which point they covered it with a steel canopy. Their experts have spent the last 18 years developing a plan to save it and make it available to scholars, preservationists, and enthusiasts for continued learning and inspiration.

In June 2020, construction began on the new glass portion, which is expected to be completed in 2023.

The project’s official website explains that “The Glass House Project, the only initiative of its kind in the world, will preserve the remaining portions of the 1769 house and replace missing walls, floors, and sections of the roof with glass. The glass serves not merely as a protective covering for the fragile original structure, but as part of an integral whole that brings the house back to life. The use of glass as a structural element, blending seamlessly with the 18th-century stone, brick, and timber is a tour de force of design and engineering. This fusion of technology and mission embodies the Menokin Foundation’s commitment to innovation in design and historic interpretation.” 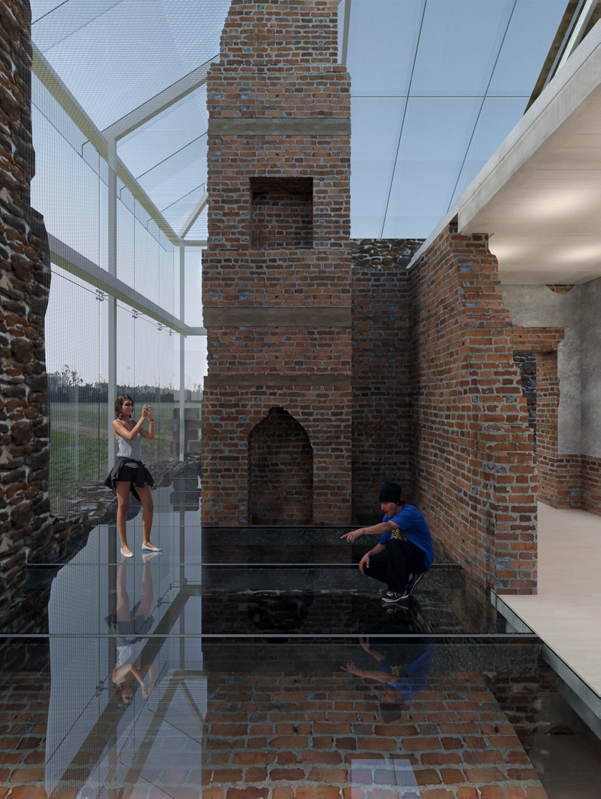 “While traditional restoration methods cover evidence of the human story that historic structures present, the transparent design of the Glass House Project emphasizes the deconstructed architectural elements of the building and provides a literal window into the lives of those who built, lived, and worked at Menokin. Fingerprints are visible in the handmade bricks, marks of hand tools are etched on the timbers, and the successes and failures of the builders are revealed.”

“Views of the surrounding landscape through the glass walls will continually connect visitors to the pristine natural environment and the traces of the tobacco plantation where generations of enslaved laborers once worked. This interplay of interior and exterior, historic past and modern-day design, allows a layered and complex look not only at the house but also the people who lived on the site over the centuries — the Rappahannock, the English settlers and the Lee family, and the people who were enslaved at Menokin.” 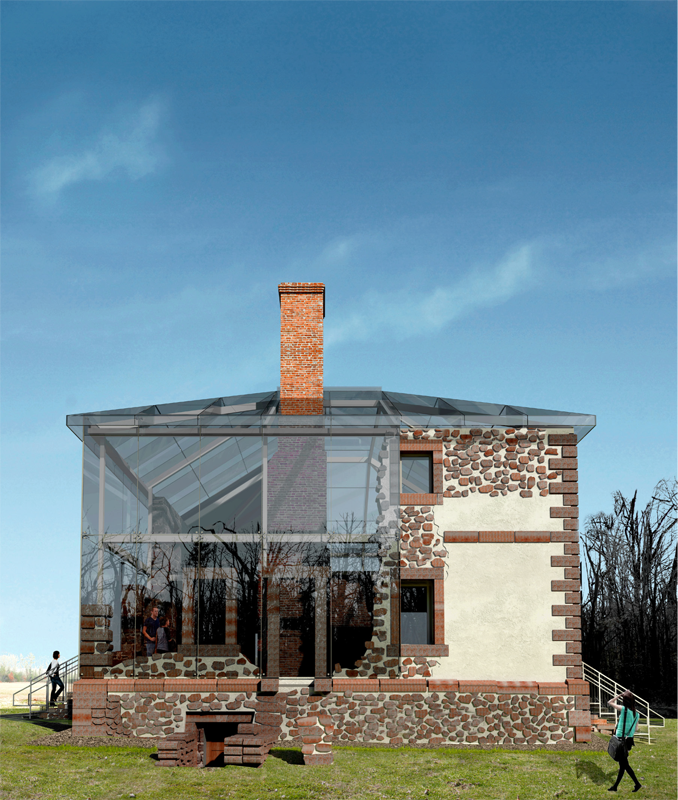 The preservationists see this last part as a crucial element in telling the tale of Menokin. The home’s importance lies not only in its past but in its ability to connect historical injustice with contemporary issues, telling the stories of the plantation’s enslaved laborers and the Rappahannock people, who lived on the land for centuries and gave “Menokin” its name.

Part of the project will include a new pavilion made of translucent agricultural fabric built above the archaeological footprint of an 18th-century field slave dwelling, which will glow at night in memorial to those enslaved residents who literally built and maintained the property, making it what it was and what it remains today.