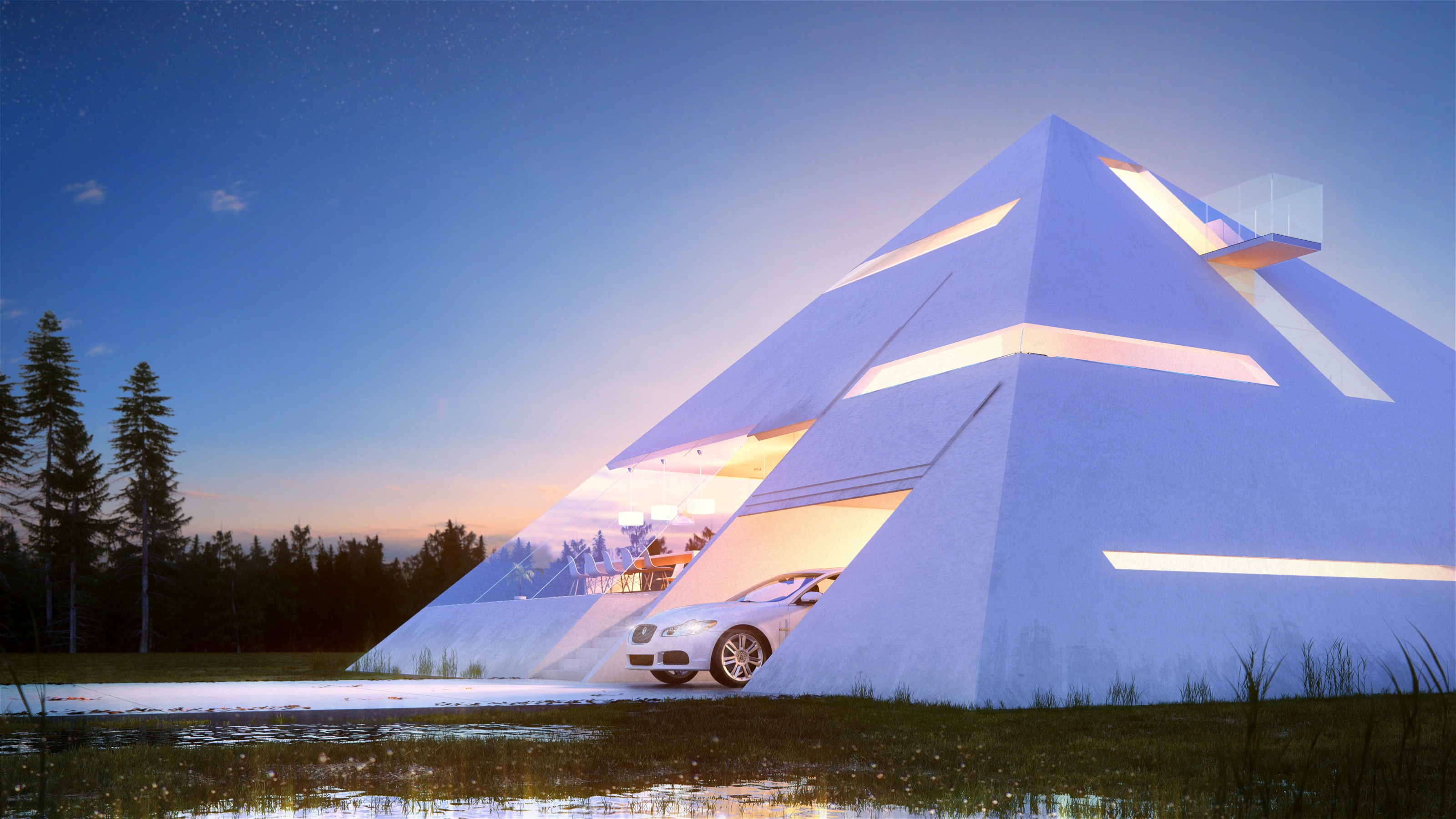 Some designs are driven by the plan, others by a concept, but this one is based on a shape – the question is: is a pyramid quite so perfect a form for a modern-day residence as it was a tomb for the rulers of ancient Egypt? Mexican architect and conceptual designer Juan Carlos Ramos decided to try and see, entering this piece into an architectural competition after a good deal of trial, error and experimentation.

In the simplest terms, he started with shared common spaces like a living room and kitchen on the main floor and worked up toward more private areas, reserving the peak for a nice secluded library space. A spiral staircase wraps up to connect the various levels.

Even a garage and balcony managed to make it into the master plan, accessed via a system of slot-like windows and sliding openings that maintain the continuous pyramid shape along the exterior of the structure. While the functionality of the form is somewhat debatable overall (the steep angles creating somewhat awkward interior spaces, not to mention construction costs), it would at least do a great job shedding dead loads during the winter and reducing wind loads in storms, being comprised entirely of angled surfaces.

“The project is inspired by the landscapes of Lake Zirahuen and Lake Los Azufres in my native Michoacán, Mexico,” says Ramos.  “It is a very wet and rainy weather in forested area, my first thought was to make a cottage and it was when I found a kind of fissure in the history of architecture , there were formal precedents for a pyramidal housing. This is due to the ritual character of the pyramid, architecture character has been given since antiquity. However for many people it may seem inconceivable from the perspective functionalist as reminiscent of modern architecture.”

“So I tried to redefine the use of a stunning geometric form and so little used in contemporary architecture . The approach was not easy, but I tried mold the spaces the project based on the logic of a contemporary home in which even you can work from home , this way I have as a compositional axis a creative space , a recording studio but well it could be a painting studio or an architectural studio. The pyramid house was created with the intention of improving the experience of living in a house as a reflection of the human being through the beauty of the architecture, I think it is a primary search in architectural design. I can not say that one way is better than another but I think the intention of creating spaces with natural illumination, comfortable and beautiful, where the user can improve their quality of life is completely honest.”