Some buildings aim to stand out as much as possible, rising from the Earth like alien spaceships and reveling in all their artificiality. Others use clever forms of camouflage to virtually disappear into the surrounding landscape, like tiny houses disguised as boulders. Sensitive natural settings might prompt architects to go one way or another: accepting that there’s no way to compete with the beauty of nature and just building whatever they like, or putting considerable effort into making the smallest possible impact. Then there’s the thoughtful approach that lies somewhere in between. 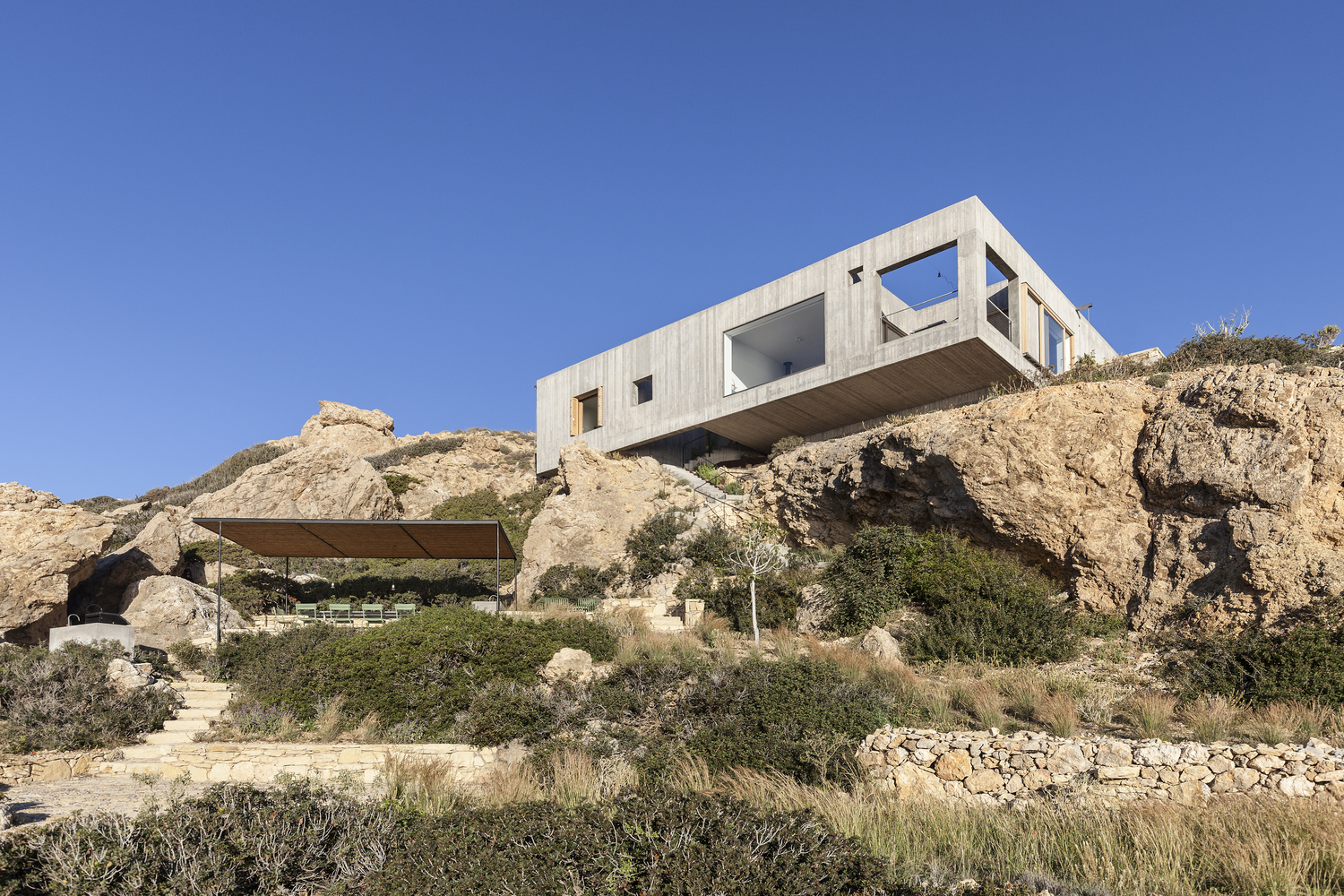 Built environments are what they are: created by and typically for humans, occupying everything from ancient city blocks to pristine remote beaches. In the latter case, you’re likely not going to fool any passersby into believing the land is still untouched, no matter what you do — but you can at least aim for a sense of harmony with the setting. For a stunning plot of land on the windy Greek island of Karpathos overlooking Afiarti Beach, OOAK Architects hoped to honor the landscape with a design that’s not quite natural, but almost feels like it could be. 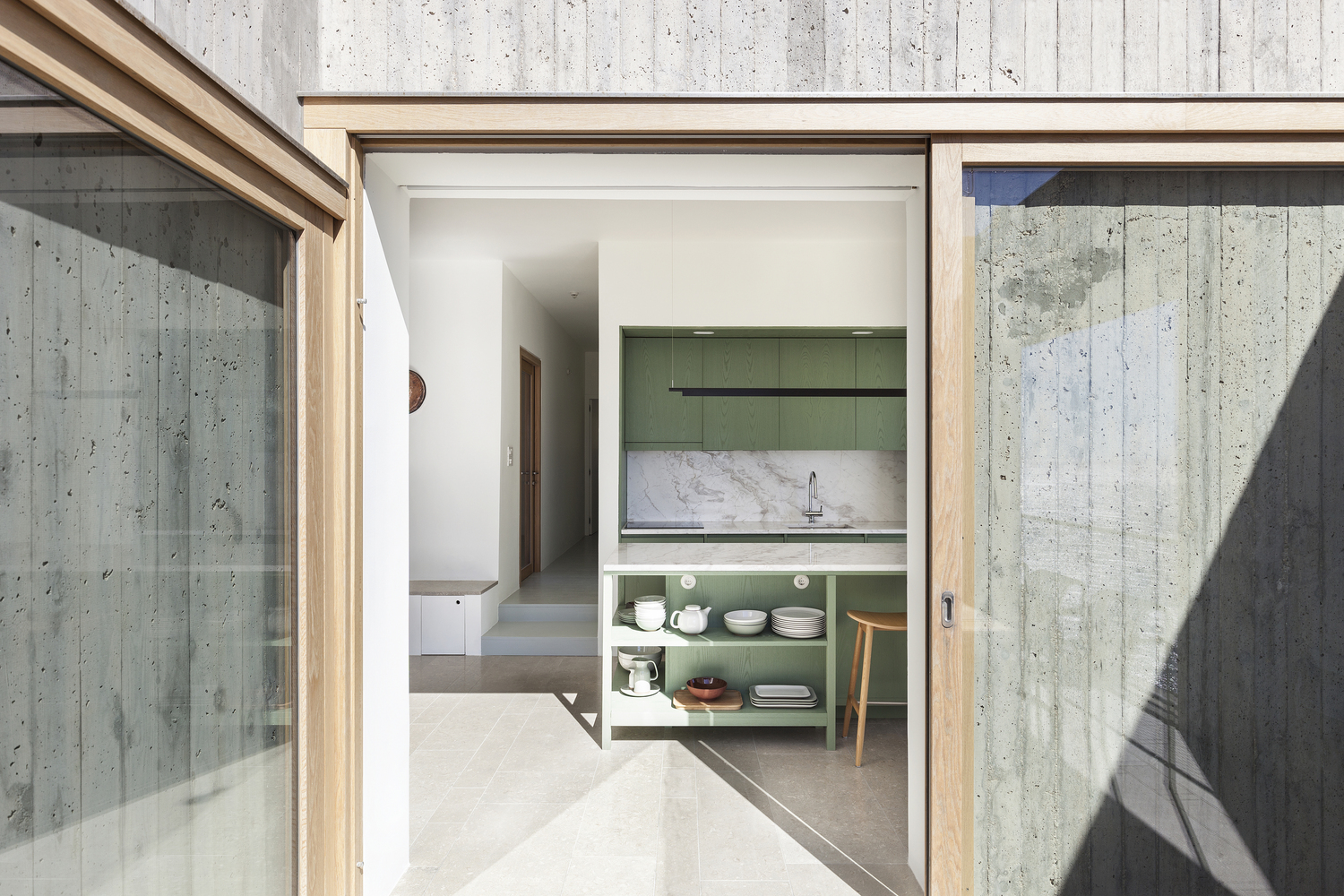 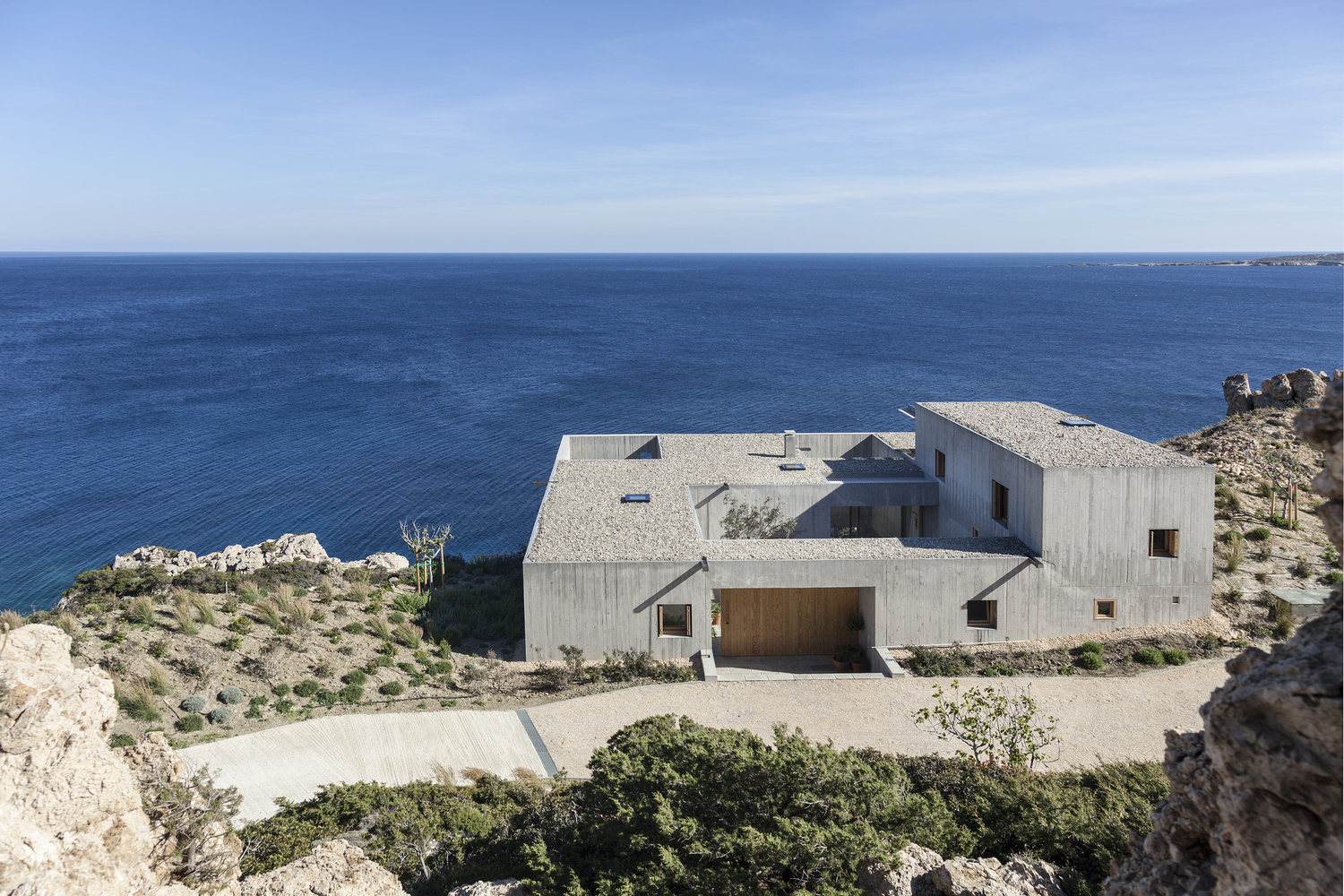 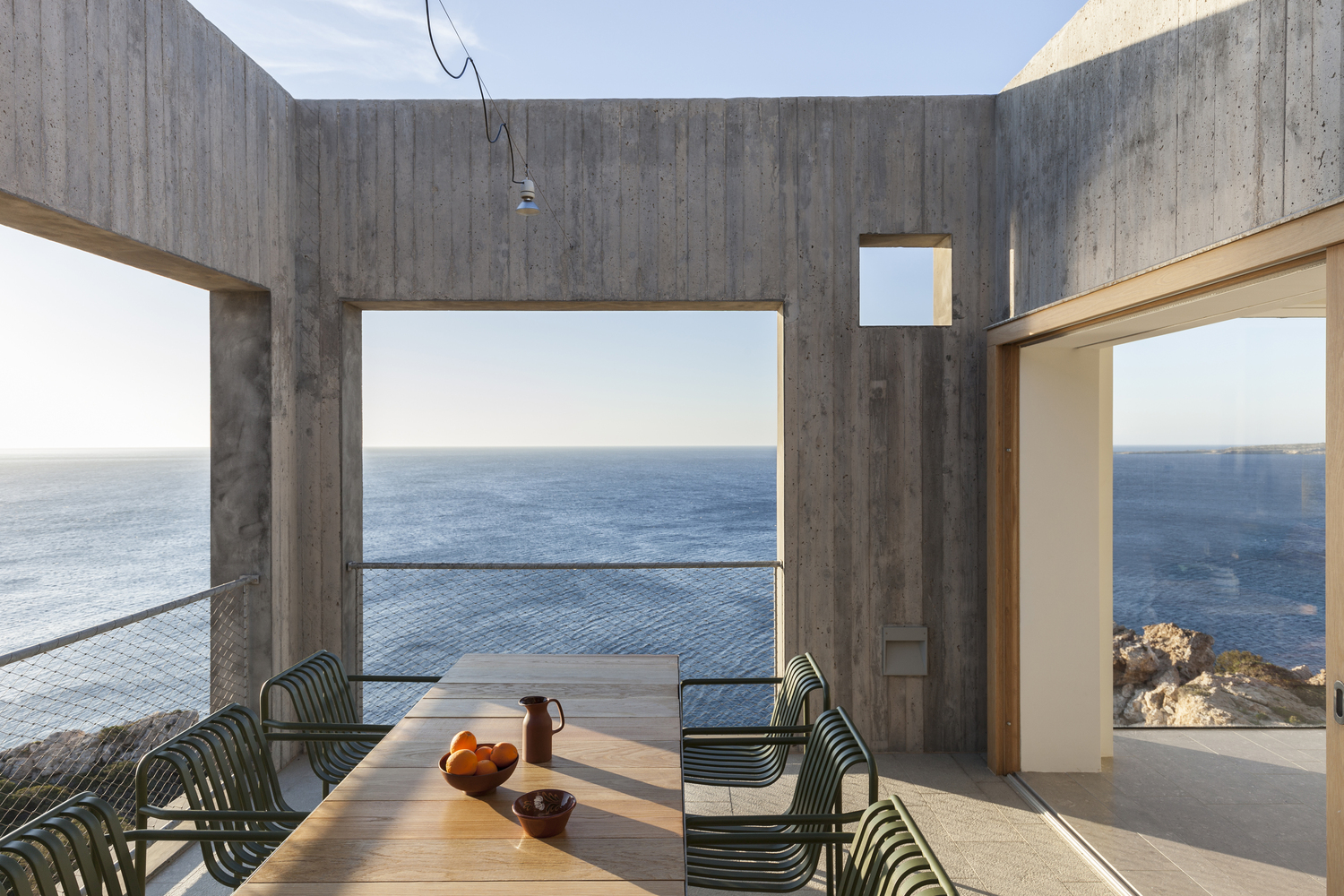 “The sparse, untamed, and dramatic landscape was the starting point for the design,” they explain. “Every man-made alteration would be visible in this unique lot with its jagged, textured cliffs that descend into the grand Aegean Sea. The question became how to introduce a foreign object — a house — into this spectacular landscape, enhancing its qualities without altering its character.”

“Rather than trying to mimic the landscape, the house is gently placed on the site as an object, leaving the surrounding landscape as untouched as possible. Landscape and building are perceived as two distinct elements that together create a new entity — much in the way a perfect shell merges with a rock over time and gradually becomes part of the rock formation. Two contrasting objects, living in symbiosis, enhancing and complementing each other.” 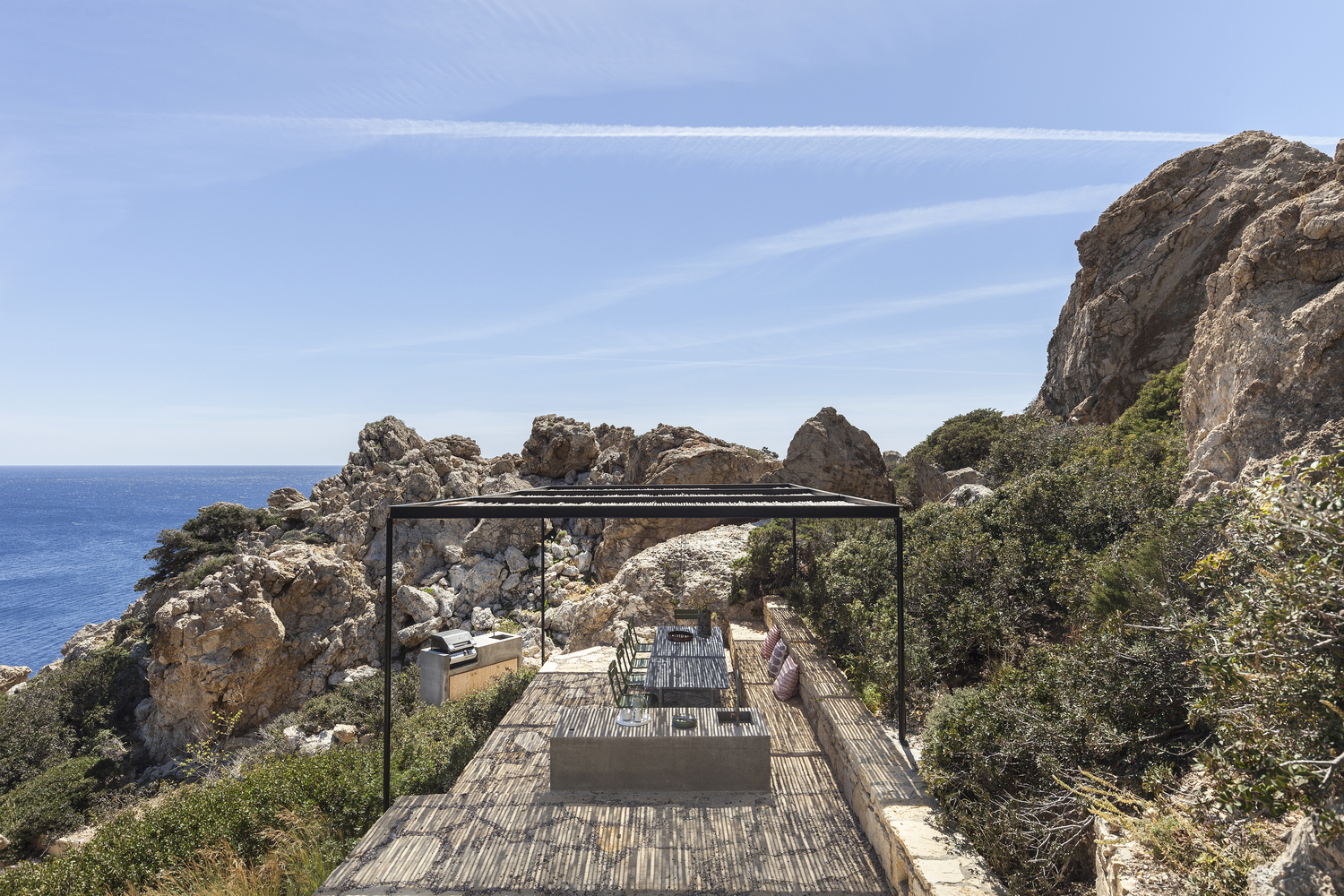 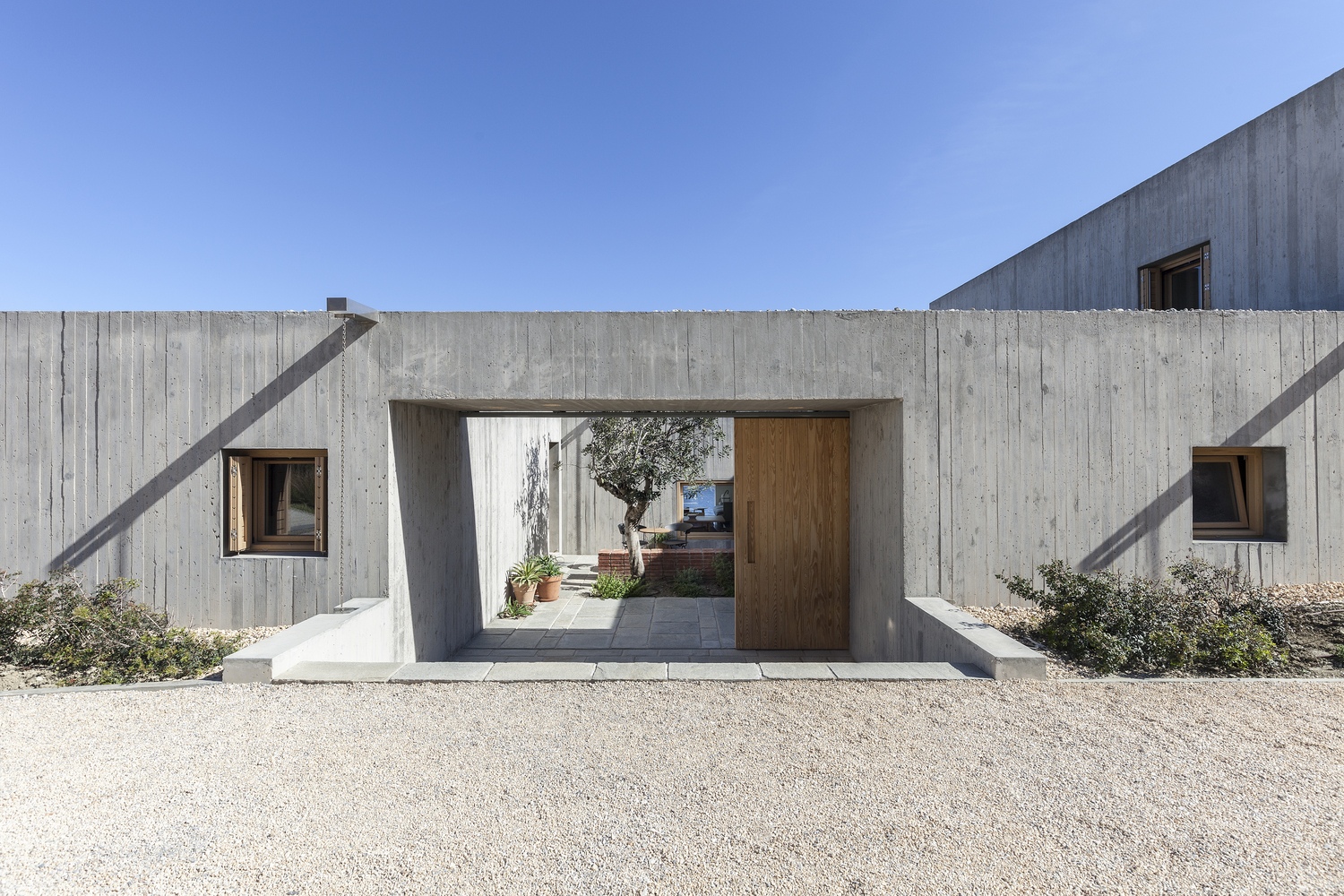 “Patio House” makes use of two natural plateaus on the site, cantilevering the home out from the higher one and placing an outdoor lounge area down below, with steps leading all the way down to the sand. The rectilinear concrete volume juts out to greet the sea, enhancing views from inside to take full advantage of the spectacular location. From below, it almost seems to be floating, its outer facade looking almost like an empty envelope thanks to its indoor/outdoor voids creating courtyards open to the air and sun. 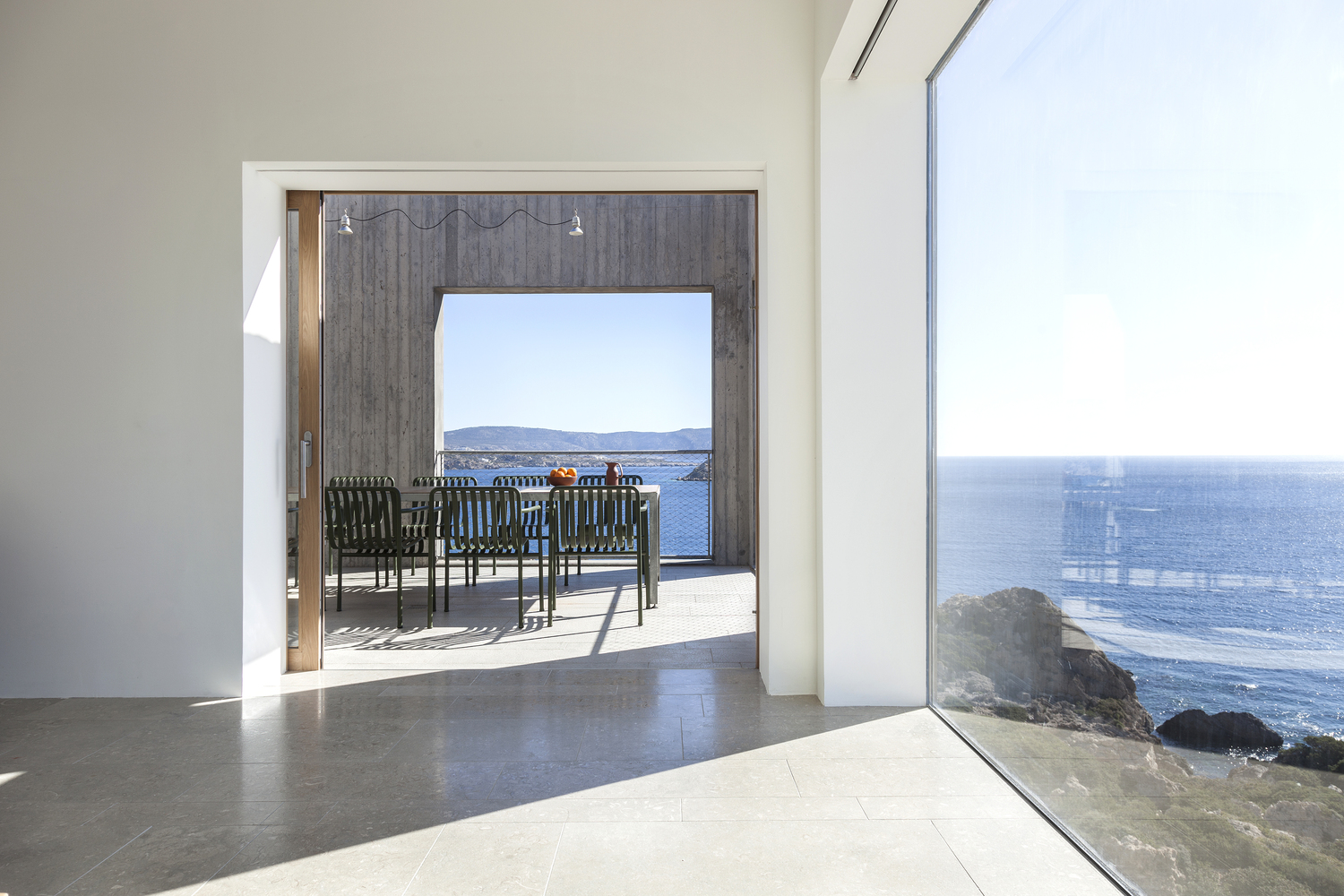 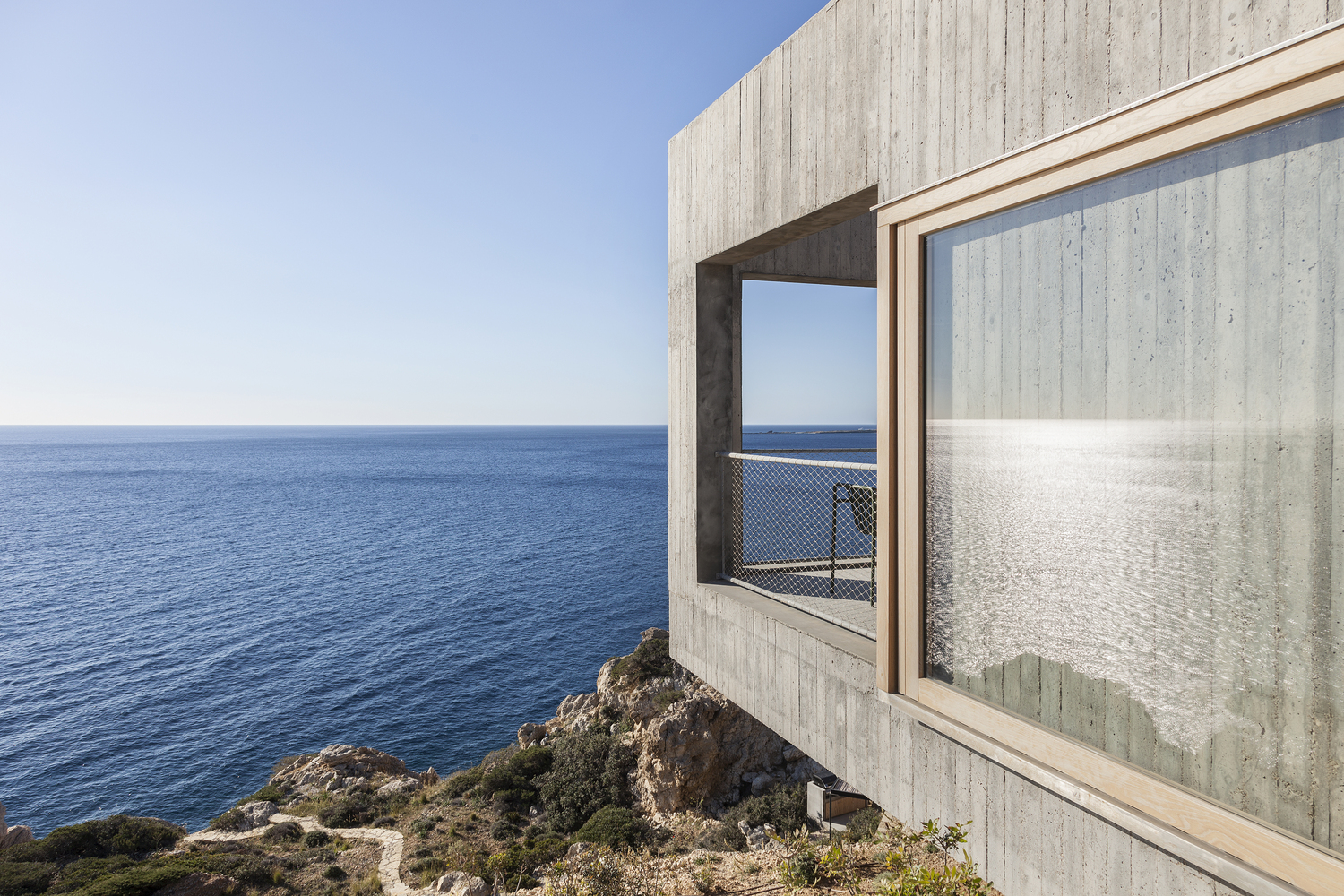 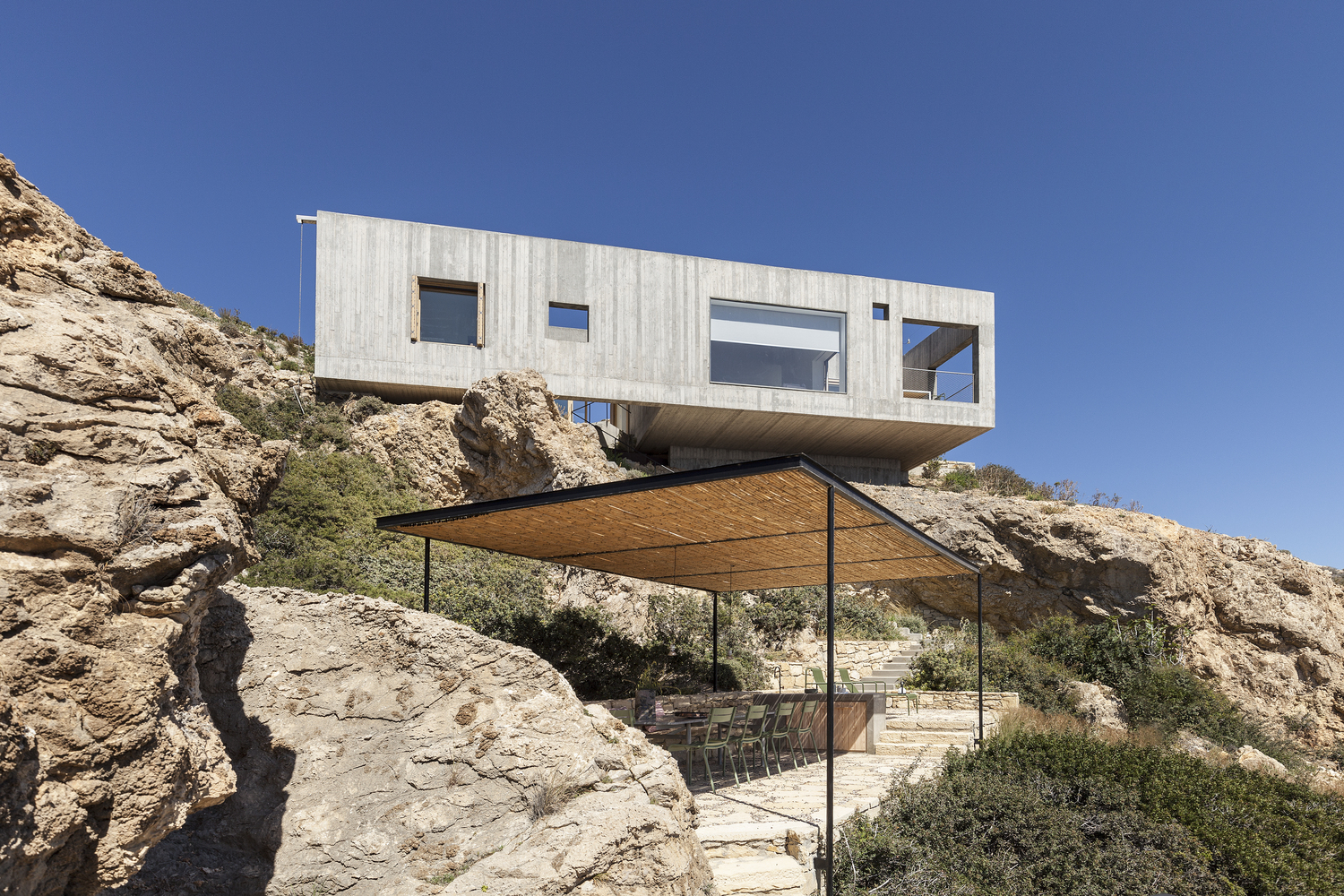 Whether the effect was intentional or not, this design choice almost reads like a modern version of Greek ruins, wherein only a few walls and pillars remain, the interiors having long since fallen. The home is also strikingly simple in its design and materials, with the entirety of its interior and exterior spaces focused on the natural beauty outside. Still, it has a quiet elegance that’s entirely its own. Made of exposed, cast in-situ reinforced concrete, the building is supported by trusses and features lots of windows, operable glazing, and signature Karpathian white paint. 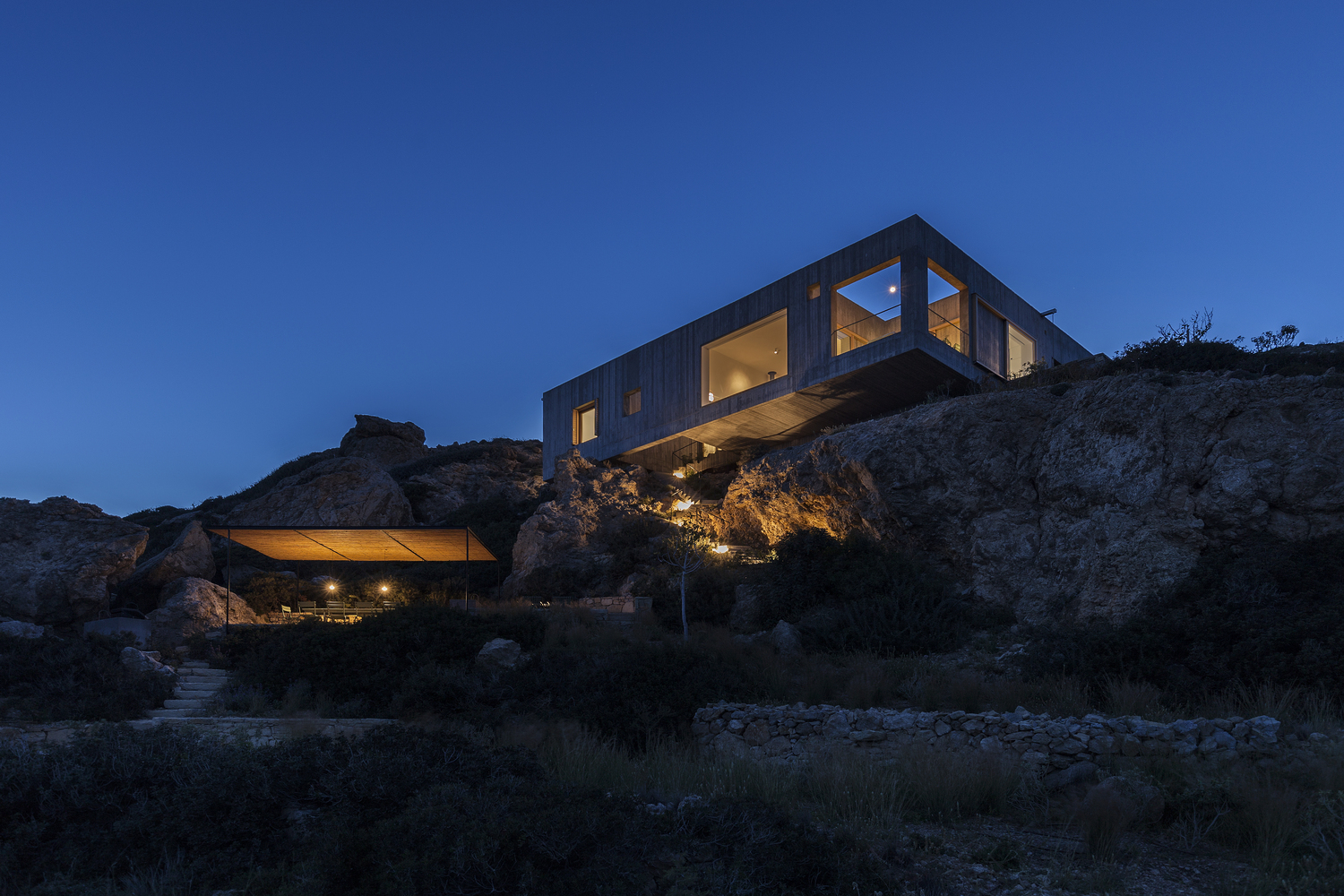 For another example of a beautiful compromise between nature and the built environment, check out a Hampton Bay getaway that blends into its scenery with the help of a grassy green roof.