At the 2015 D23 Expo, Disney revealed its plans to build a 14-acre Star Wars-themed area in both the original Disneyland and the company’s “Hollywood Studios” park in Orlando, Florida. At this year’s convention, the company announced that the area would be called “Star Wars: Galaxy’s Edge” and that anyone visiting the Orlando location would get the chance to experience a “100 percent immersive,” two-day narrative adventure by staying in a special Star Wars-themed hotel! 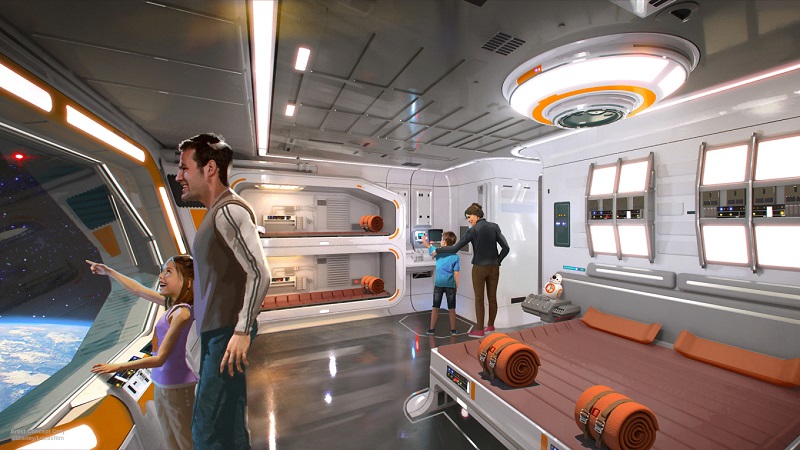 Set for completion in the next few years, the “Star Wars Hotel” is being designed to look and feel like one of the series’ iconic starships, complete with views of “intergalactic space” from each window. Guests will even get to “fly” a life-size replica of the Millennium Falcon through the heart of a battle between the First Order and the Resistance. 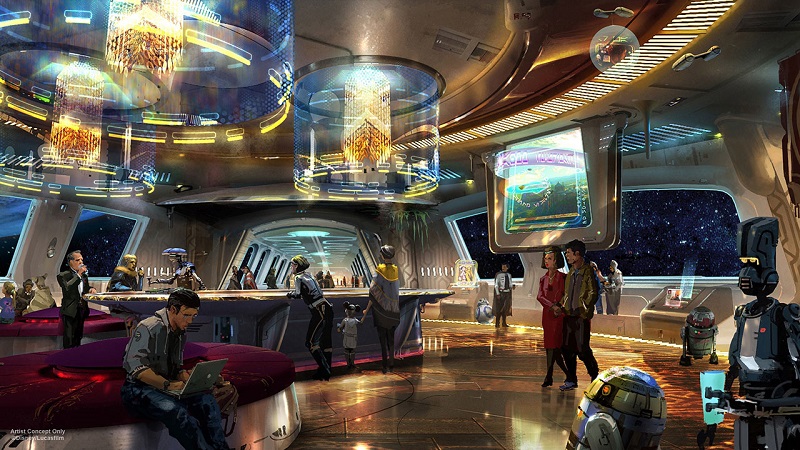 The two-day adventure is expected to cost anywhere from $900 to $1000, with rooms accommodating up to four people each. During the day, guests can explore the park and sample Star Wars-inspired treats like “blue milk” from a variety of themed restaurants. Disney even plans to replicate the famous “Mos Eisley Cantina” from the original films and bring it to life in Galaxy’s Edge! 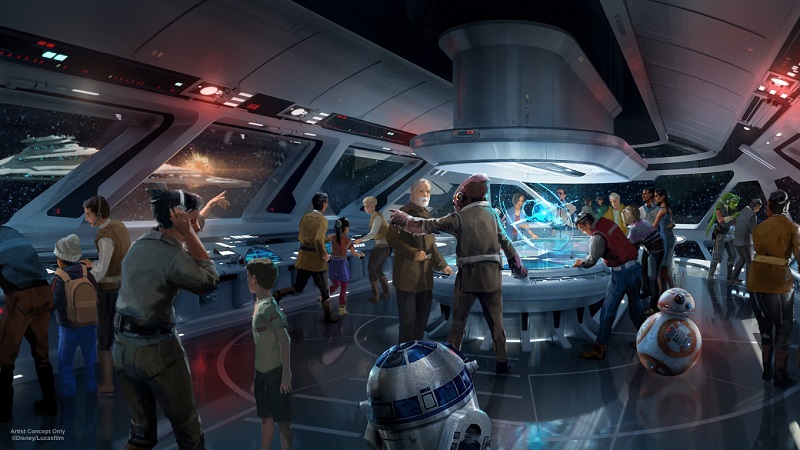 Walt Disney Parks and Resorts Chairman Bob Chapek had this to say on the project: “To say we are excited for the Star Wars-themed lands to open in 2019 is an understatement. All along, we have said this will be game-changing, and through the model we can begin to see how truly epic these immersive new worlds will be.”
Galaxy’s Edge is Disney’s largest ever single-themed expansion, and the company clearly couldn’t be more thrilled about it. Chris Beatty, the project’s Executive Director, even told ABC News: “It’s got to be big. Go big or go home with Star Wars.” Bearing in mind that Disney owns the rights to Star Wars and that series creator George Lucas is fully on-board with the expansion, it seems like the only thing that could hold the company back is the limits of its imagination. 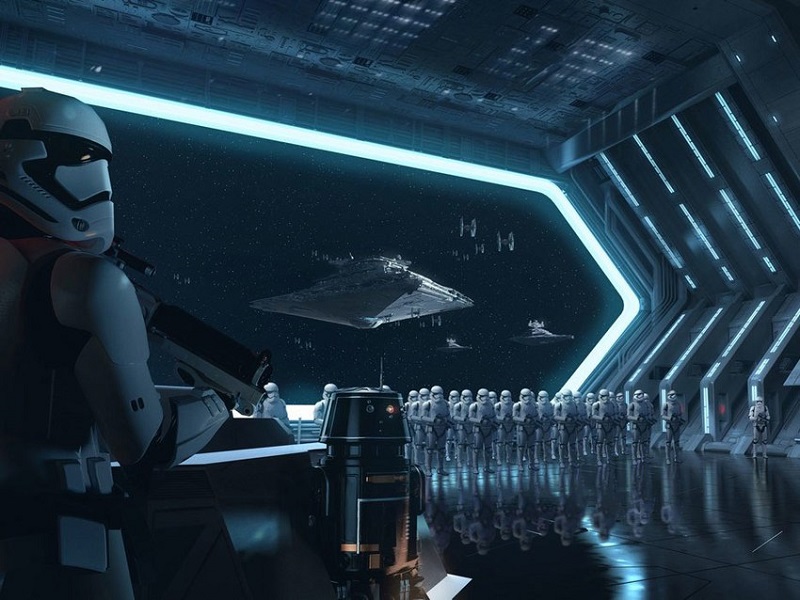 “Cast members,” or theme park staff, will be dressed up as well-known Star Wars characters like Chewbacca, BB-8, and Kylo Ren. The Disney Parks blog explains that Galaxy’s Edge “will allow guests to visit a remote trading port on the edge of wild space, where Star Wars characters and their stories come to life — and where guests will find themselves in the middle of the action.” 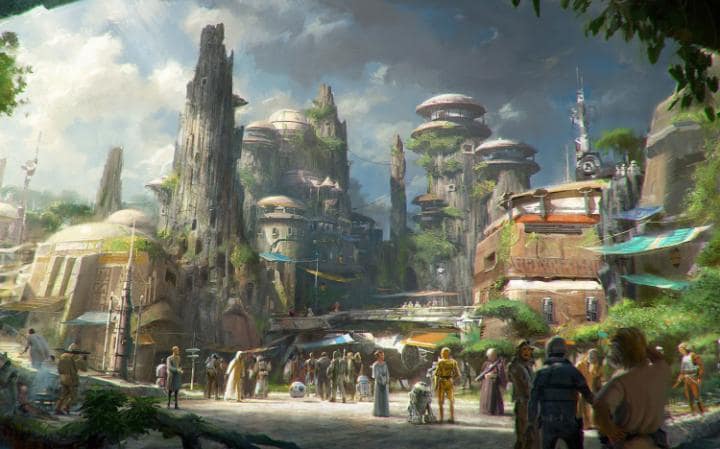 If watching the film series has whetted your appetite for a more immersive Star Wars experience, you’re in luck: you only need to wait until 2019 before you can dust off your lightsaber and head over to Galaxy’s Edge. If you’re itching to sample a Star Wars-themed experience before then, you can always check out “Star Tours — The Adventures Continue” and “Jedi Training: Trials of the Temple” in Disney parks around the world. 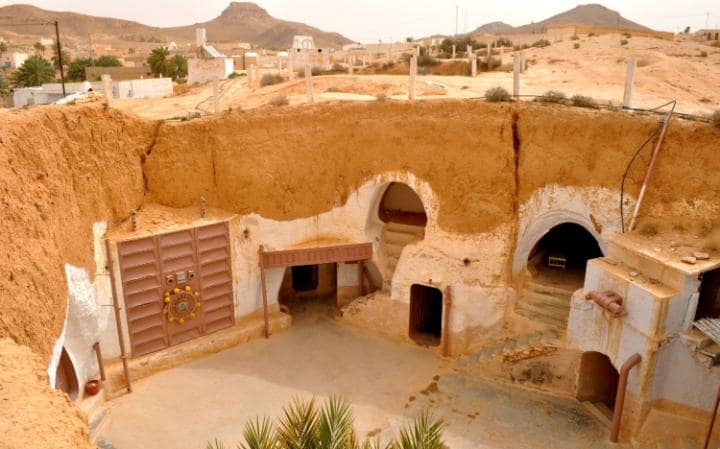 Continue reading below
Our Featured Videos
If you’d prefer a more relaxed version of the Star Wars experience, you might want to visit Hotel Sidi Driss in Tunisia. This hotel was depicted as Luke Skywalker’s childhood home on Tatooine in Star Wars Episode IV: A New Hope and still contains many of the film’s original props. If you’re a Star Wars fan, its clear that you have many options to explore, and they’re only going to get bigger and better. However you choose to live out your Star Wars dreams, just remember to “use the Force.”