Over a thousand years ago, Castello Montbui was a key center of power in the Queralt mountains of Igualada, Spain, offering its inhabitants a commanding view of the Ódena basin. The crumbling walls that still stand there are thought to be remnants of the original ninth century structure, a square building with rounded corners and the church of Santa Maria at its base. In the 11th century, it temporarily became a fortress, and parts of it had to be rebuilt after taking wartime damage. Then, in the 20th century, it was abandoned and nearly lost to the ravages of time and neglect. 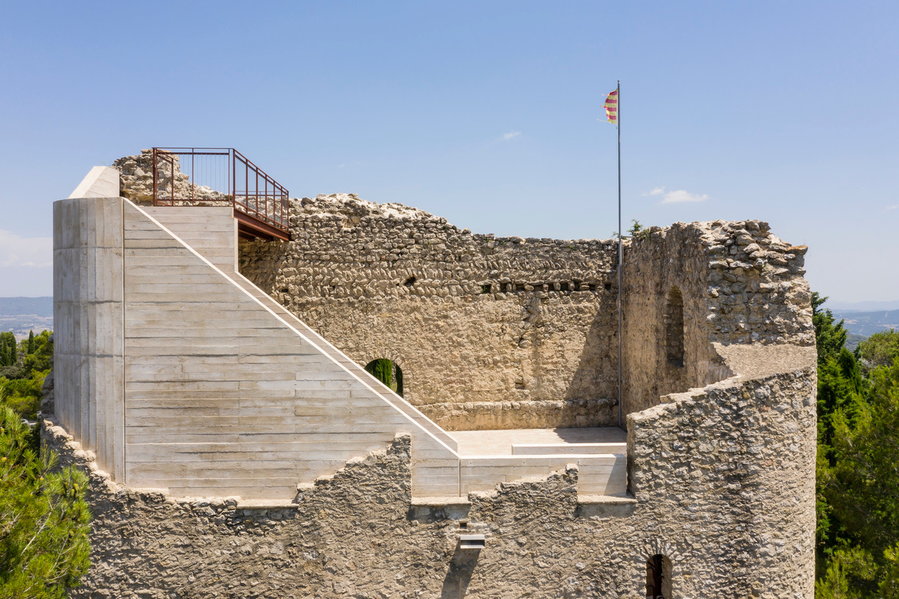 Today, the castle also known as “La Tossa” has reclaimed its position as the “salta de la donzella,” or the “maiden’s leap,” the highest point in the vicinity. Architect Meritxell Inaraja stabilized the ruins and transformed them into a lookout providing the public with the same views once enjoyed only by royalty and nobles. Given the castle’s historic and cultural value, Inaraja took a delicate approach, preserving the experience of the original medieval architecture while also making it safe to climb. 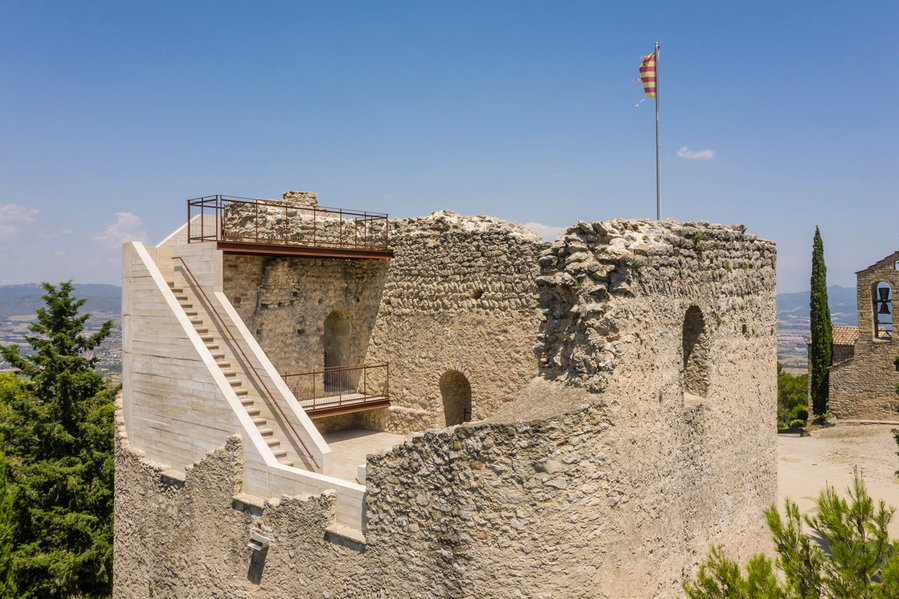 Before starting on the renovation, Inaraja carried out a historical study that revealed the existence of a slab roof on the structure’s first floor. Based on the layout of similar buildings from the same time period, she determined that the original staircase ran along the now-collapsed western wall. The interior was divided into two floors and a basement, with the entrance on the eastern facade, which is itself about 33 feet tall (10 meters). It’s no wonder this building was used as a fortress, given that the walls are six feet thick. 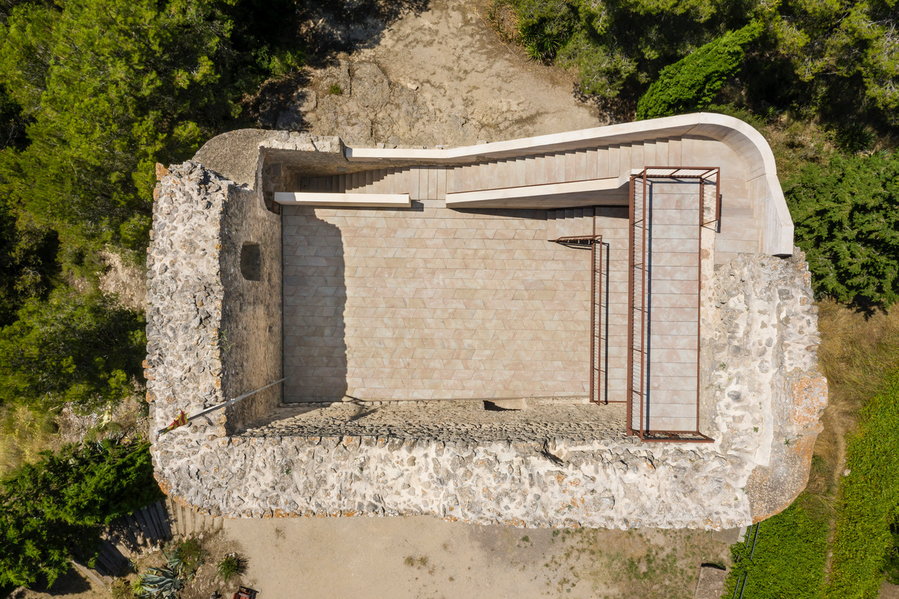 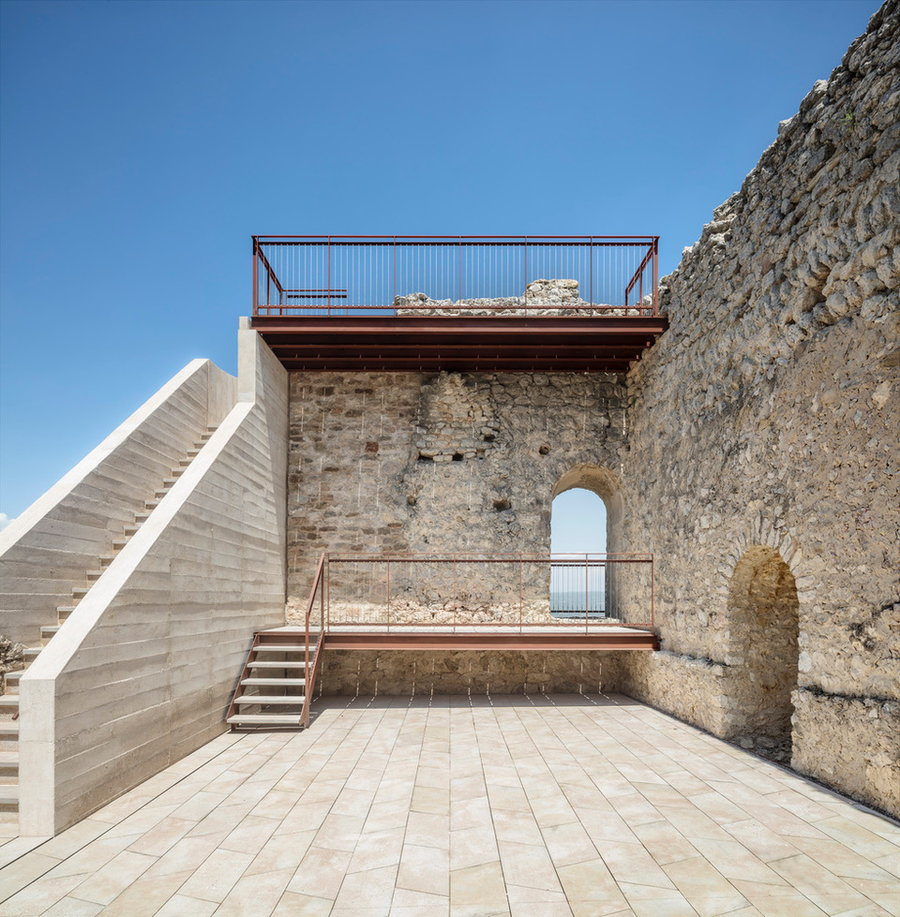 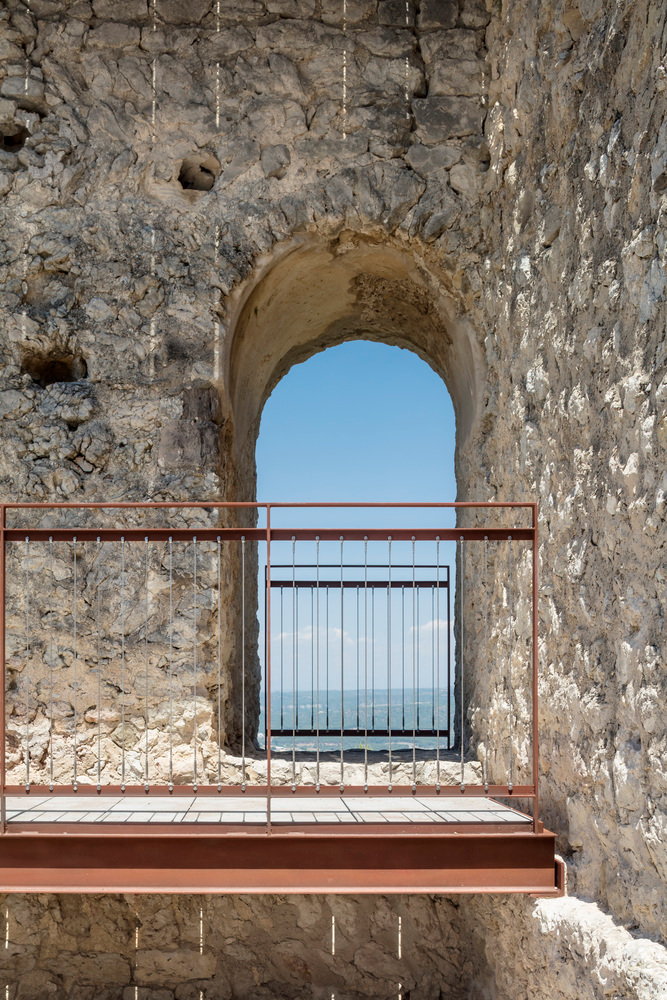 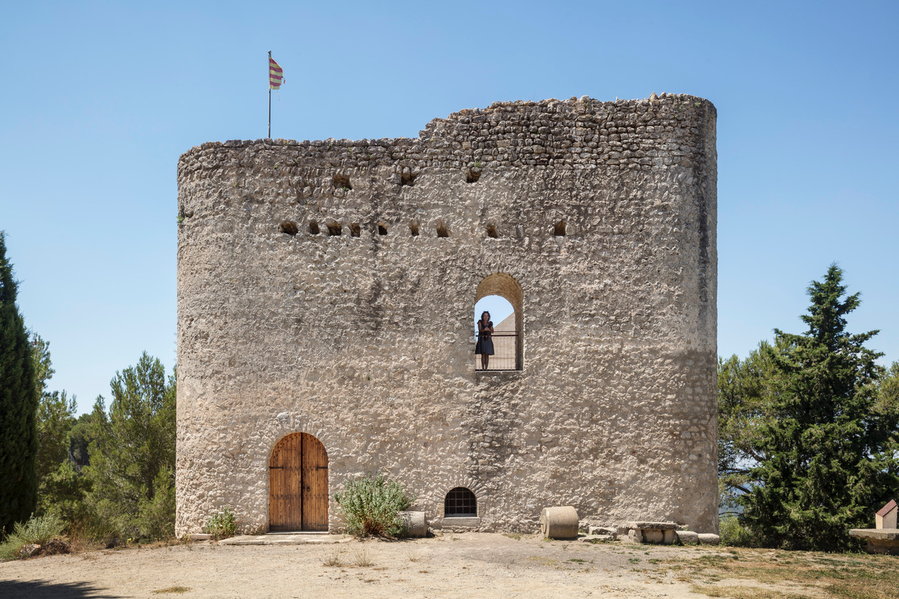 “The restoration proposal is based on these historical findings and the available information about the tower’s original construction,” Inaraja says. “The project proposes reinforcement of the existing walls and the construction of specific elements referencing historical details, which will allow us to climb to the highest part of the tower, offering a view of the region and the other frontier castles.”

With its original roof missing, the upper levels are now open air, turning the ruins into a sort of pavilion. Instead of enclosing the building, Inaraja maintained this openness, inserting a new floor and a staircase with several viewing platforms that go all the way up to the highest point of the remaining walls. Visitors can gaze out the original arched windows, taking in the landscape from all sides. 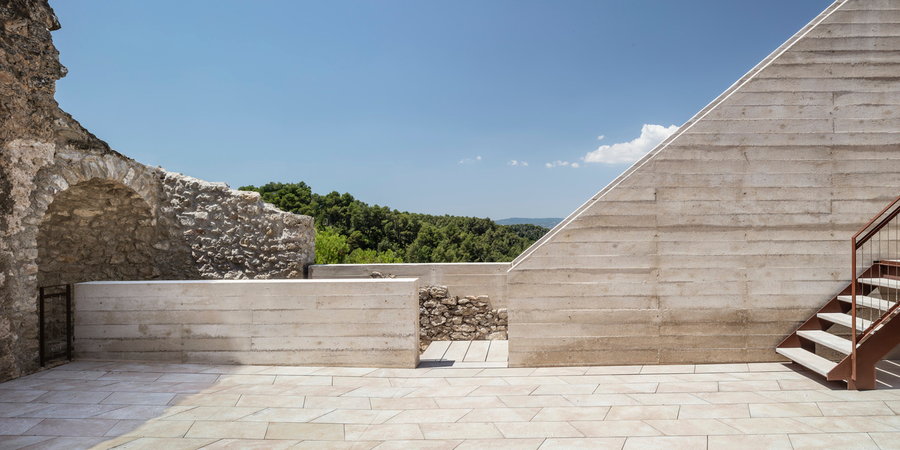 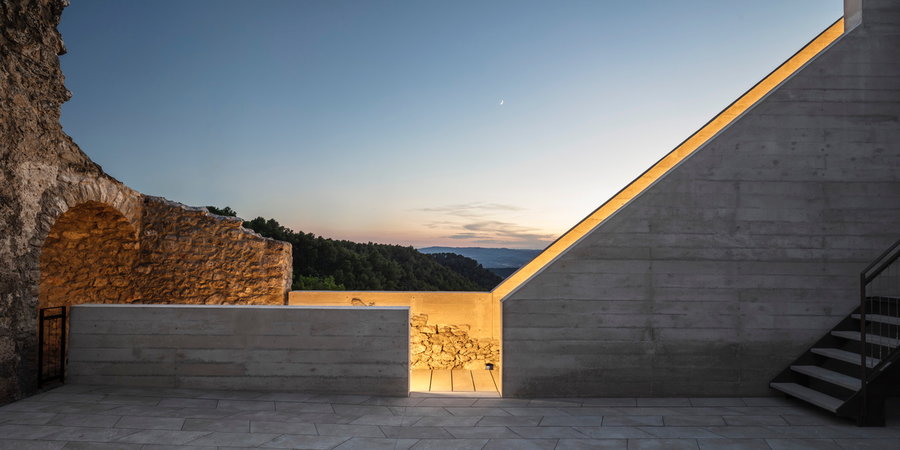 Inaraja adds that “the level corresponding to the original roof is reached by the stairs that consist of the west wall and recovers the idea of a possible original staircase located within the thickness of the walls, as is typical of many towers of this time. The sloping shape of the staircase also makes it possible to respect the unfinished appearance and the memory of the ruins. The same idea of uniting function and historical explanation is used in the construction of a small section of slab corresponding to the original level of the main floor of the tower as a balcony-viewpoint from the opening of the north sector, possibly the original access to the tower from the outside.” 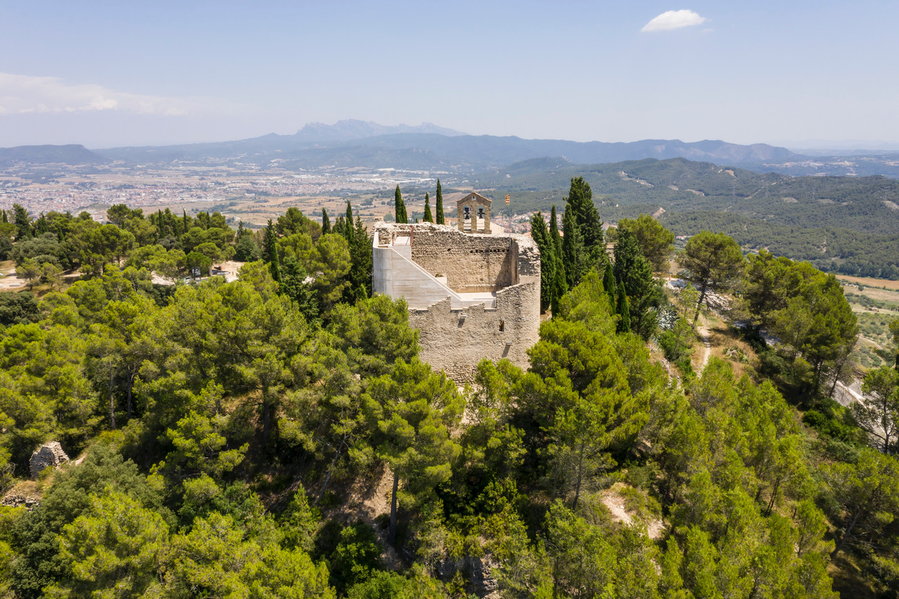 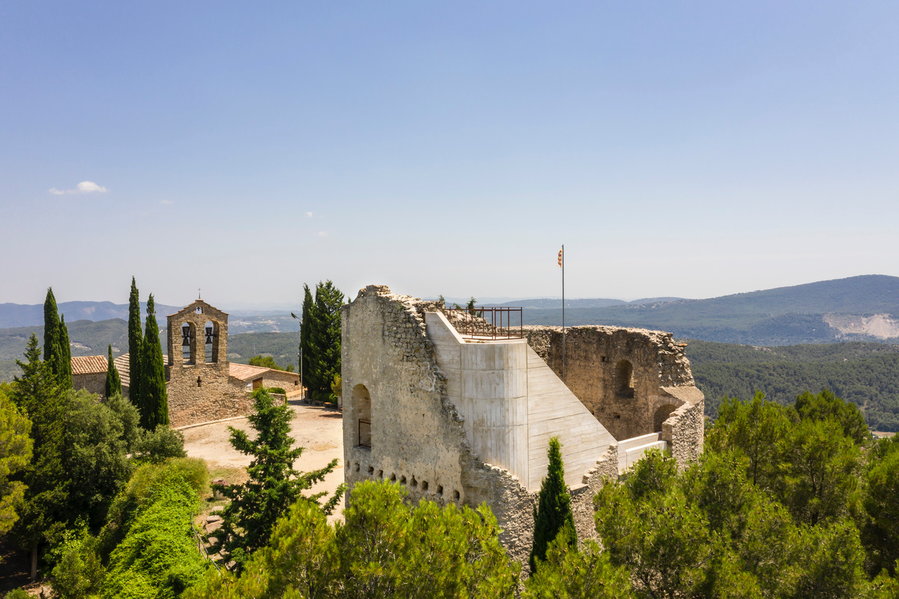 With smooth modern materials that match the color and texture of the original irregular stone, Inaraja’s additions complement the original structure without trying to update it or achieve a faux-historical effect that matches. The result pays respect to the Castello’s historical importance and restores it as a functional landmark, drawing tourists from all over to the area.