Design wunderkind Thomas Heatherwick and his eponymous Heatherwick Studio are nearing completion on their beehive-shaped conceptual public centerpiece for the development at New York’s Hudson Yards, a multi-purpose living, working, dining, and shopping complex on Manhattan’s West Side.

The studio was commissioned to create a focal point for this new “heart of New York,” which has been described by its developers as a “triumph of culture, commerce, and cuisine; a technological marvel that pairs style with sustainability; a convergence of parks and public space.” 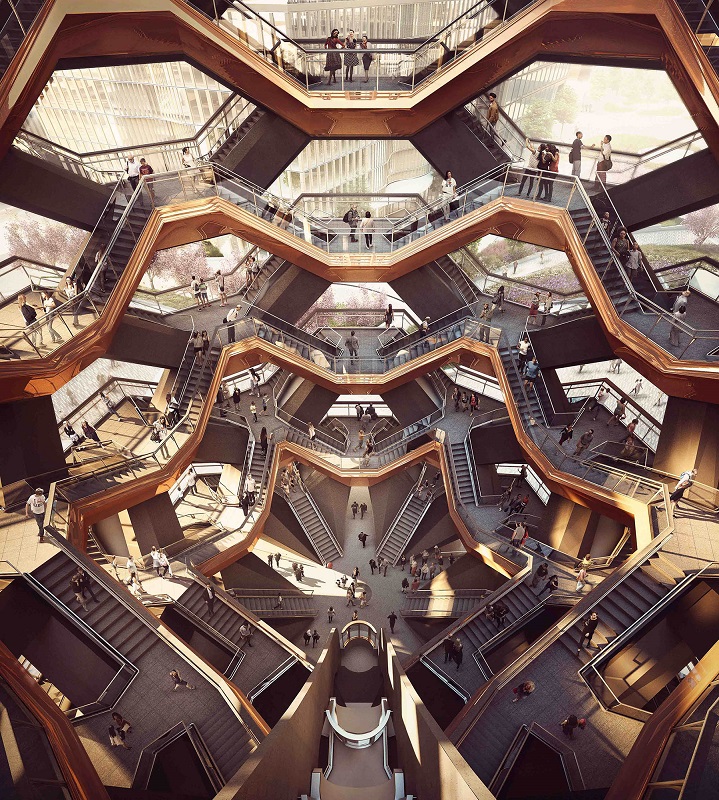 The design draws on historical inspiration from Indian stepwells, ancient structures found in the subcontinent’s more arid regions that allowed descent down a series of terraces or staircases to a pool at the bottom. Heatherwick Studio used the stepwells as precedent because of their particular ability to create a kind of interior rhythm among its users, and also because they wished to create a structure that visitors could engage with, explore, touch, and feel like they were a part of.

The constant ascending and descending on the stairs imbues the centerpiece, which has been given the name “Vessel,” with a sense of movement and promotes moments of interaction and connection between visitors.

Reaching 46 meters into the air at its finished height, Vessel is composed of 154 interconnecting flights of stairs, which in turn consist of an incredible 2,500 steps and 80 landings. This sprawling landscape of circulation is arranged in an almost helical fashion, with interlocking pathways whose combined length is about a mile. Vessel is in many ways a vertical playground that’s intended to be explored, climbed, and experimented with by its users. 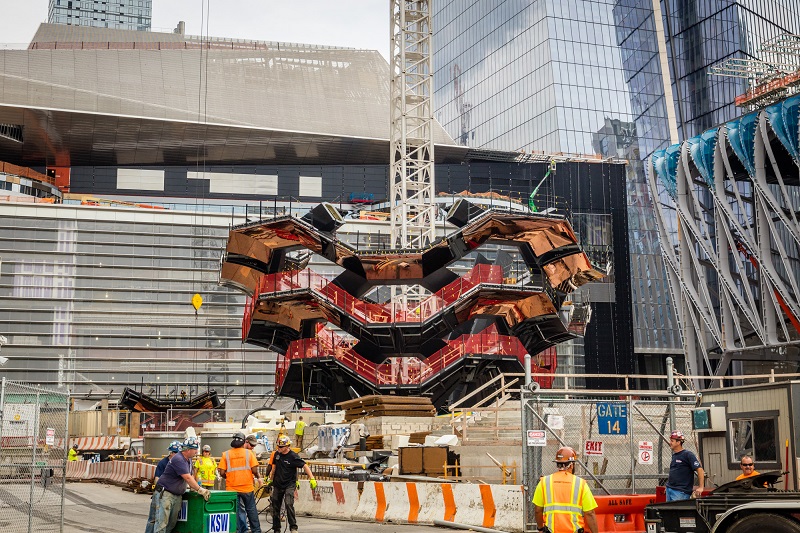 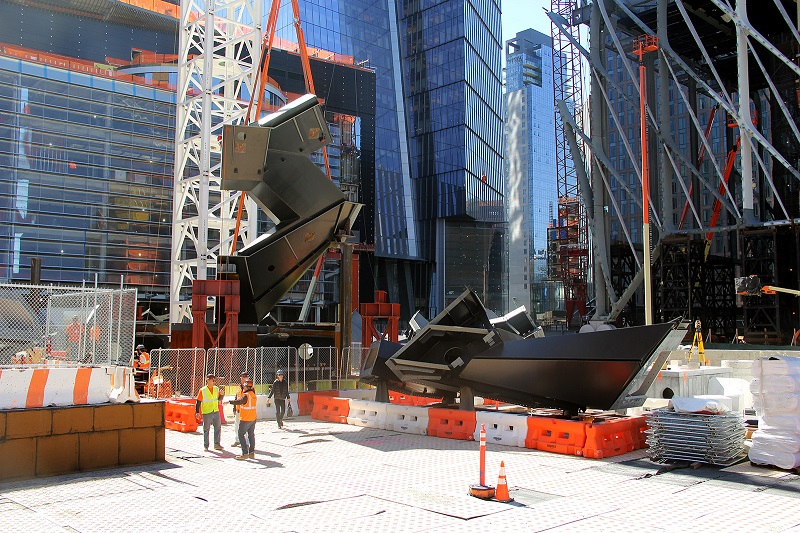 The structure is made up of a raw steel architectural framework, which is juxtaposed by a set of distinctly polished copper-colored undersides. The honeycomb-like structure frames views of Manhattan, the Hudson river, and the soaring towers of the Hudson Yards development around it. Measuring 50 feet wide at its base, Vessel expands to reach a width of 150 feet at its peak, and its lattice of interconnecting staircases will even be equipped with a curved elevator for increased accessibility.

“We saw this as a building made from staircases. There was nothing to commemorate here, and having something that creates a physical engagement creates a chemistry between us,” said Heatherwick at the project’s unveiling.

A vision for Hudson Yards

When compared to the surrounding city of New York, where many designers have had to take historical and contemporary events into account when imagining new complexes (such as the High Line and the WTC), Hudson Yards’ relatively untapped architectural potential seems to lend it a certain kind of freedom.

The complex, which is the largest private real estate development ever in the United States and the largest to be built in New York since the Rockefeller Center, is centered around a huge landscaped plaza and bordered by glass skyscrapers that will shimmer in the sun as it comes in over the river.

The extension of the No. 7 subway line will connect Hudson Yards with the rest of the city, and the retail portion of the development is hoping to attract big name Fortune 500 companies into its corporate office spaces.