Are we collectively over the sterile spaceship-inspired vibes of monochromatic minimalism yet? Can we push beyond practical but overplayed midcentury modern to see what else is out there? These trends have dominated much of the 21st century thus far, but if you’re ready for something that feels infinitely fresher, take heart. A new apartment renovation in Milan by Marcante Testa dishes up some seriously inspiring interiors to carry you into the new decade. 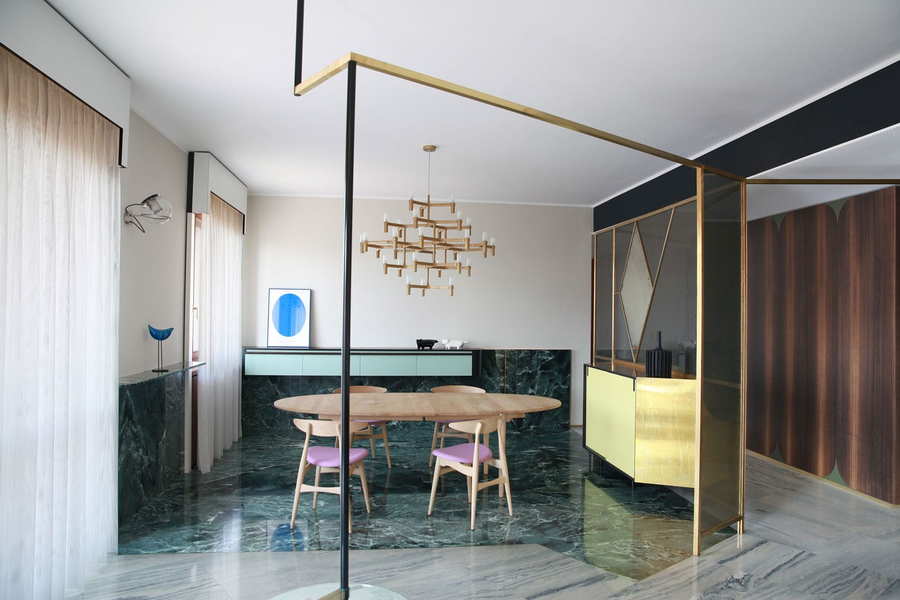 The setting is a typical “bourgeois” apartment in a 1960s building on Corso Sempione in the historic city center. Calling the project “Teorema Milanese,” the architectural duo of Andrea Marcante and Adelaide Testa transformed the apartment’s classically-styled interiors into a bright, open, and playful living space that feels utterly of its time without being too trendy. 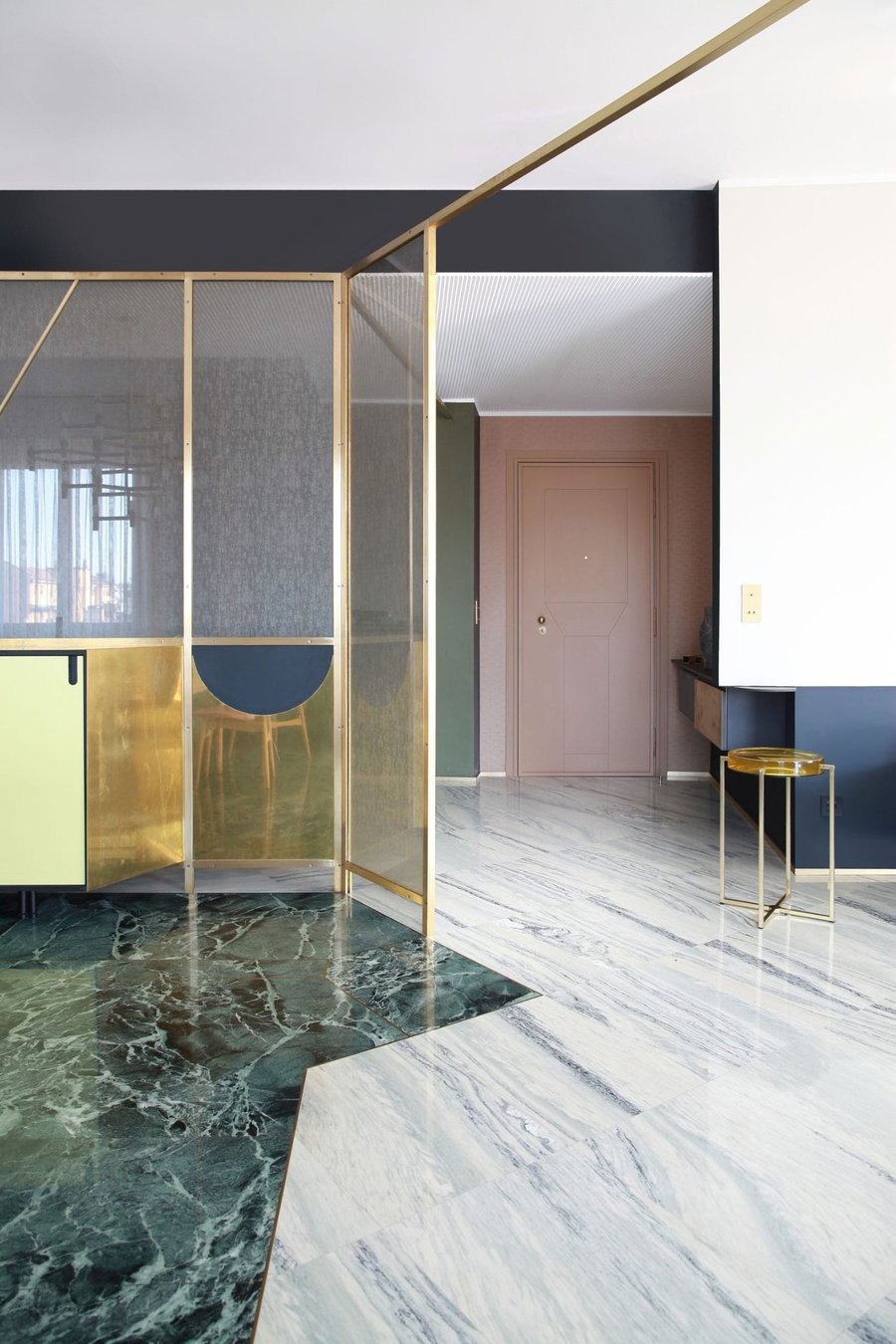 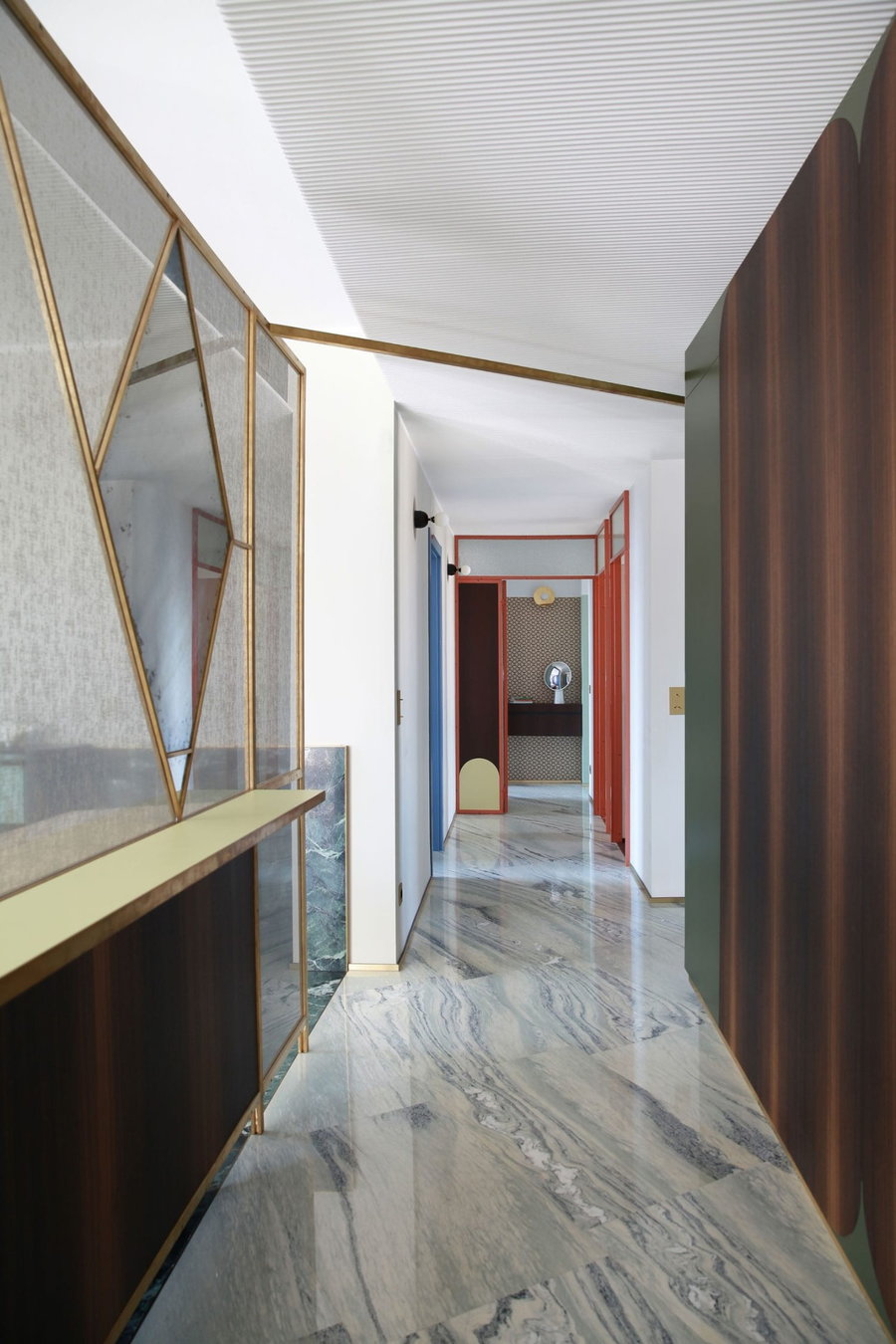 The architects wanted to retain the apartment’s original layout but brighten it up, so they only made one major structural change. Knocking down a partition wall to combine the living and dining rooms into a single large space, they connected the living room to the entrance and helped maintain visual contact with the kitchen. A central corridor leads to private areas like the bedrooms and bathroom.

Translucent partitions outlined in brass transmit daylight from a large bank of windows on the outer wall and establish interesting lines for the eye to follow as you move through the common areas. These lines interact with those of contrasting marble flooring, which is the real star of the apartment. Verde Alpi marble in a rich, deep green anchors the dining space, leading into the streaked blue-and-white Cipollino Tirreno marble in the entranceway. The glossiness of the marble reflects the daylight, giving the home a subdued glow all throughout. 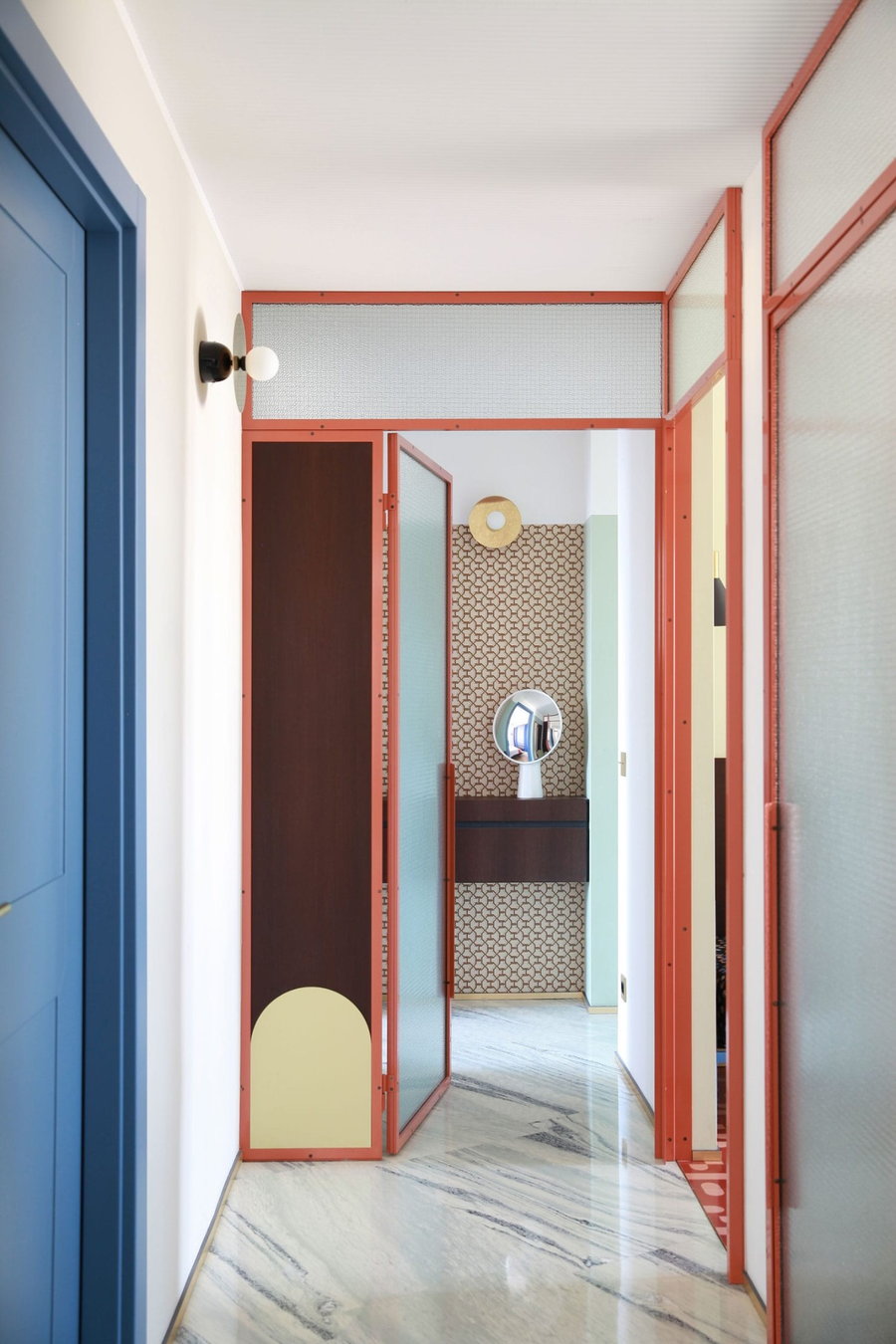 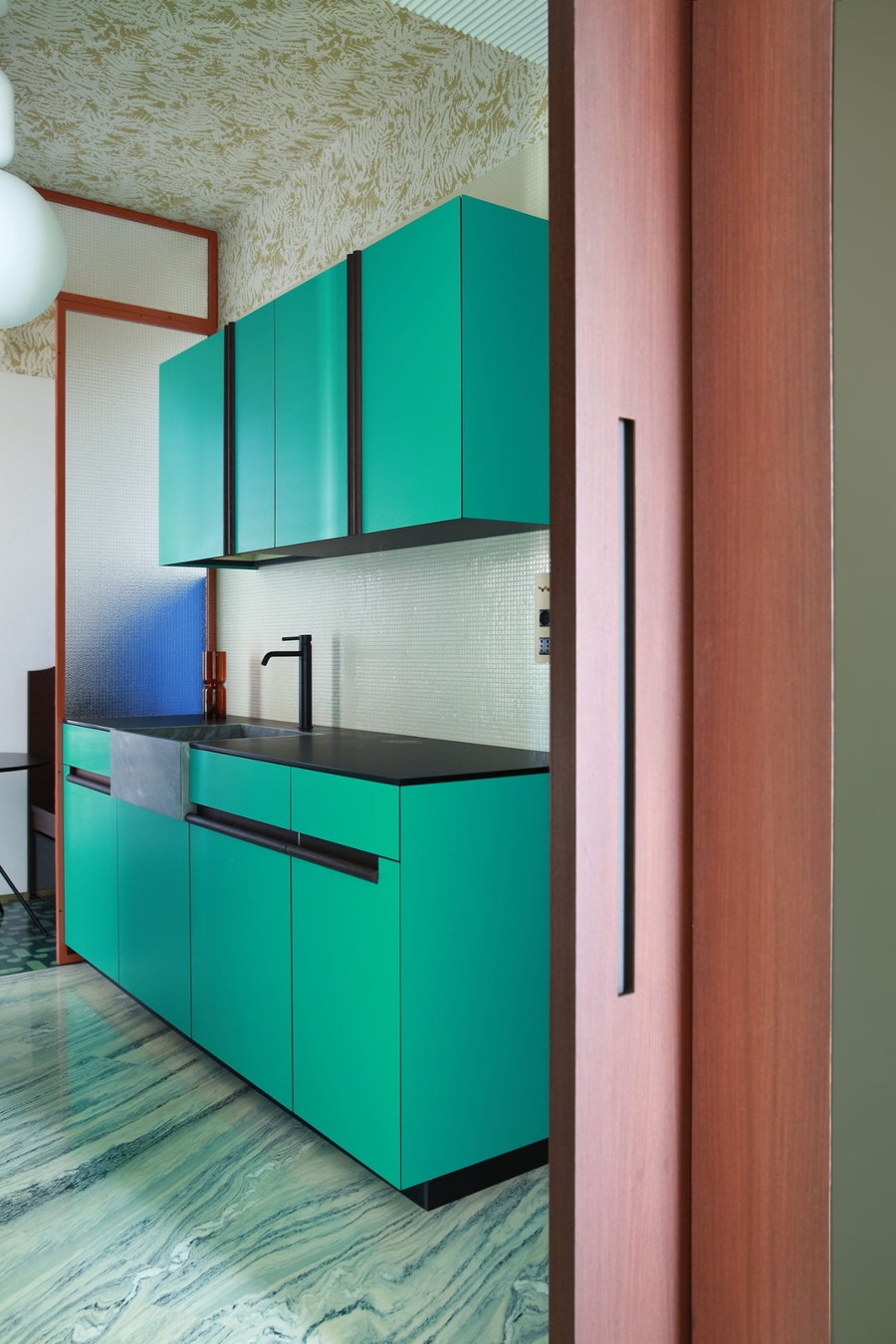 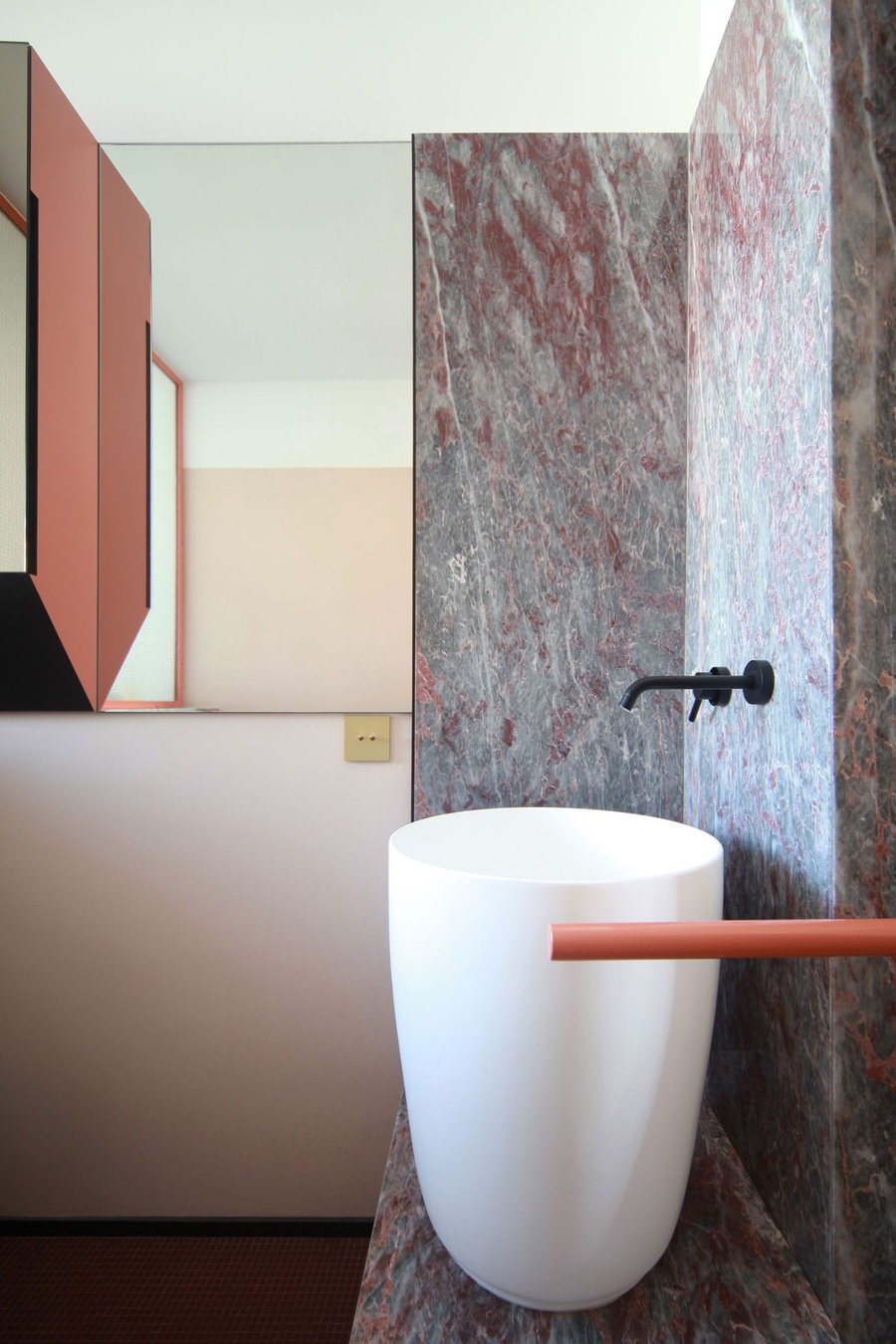 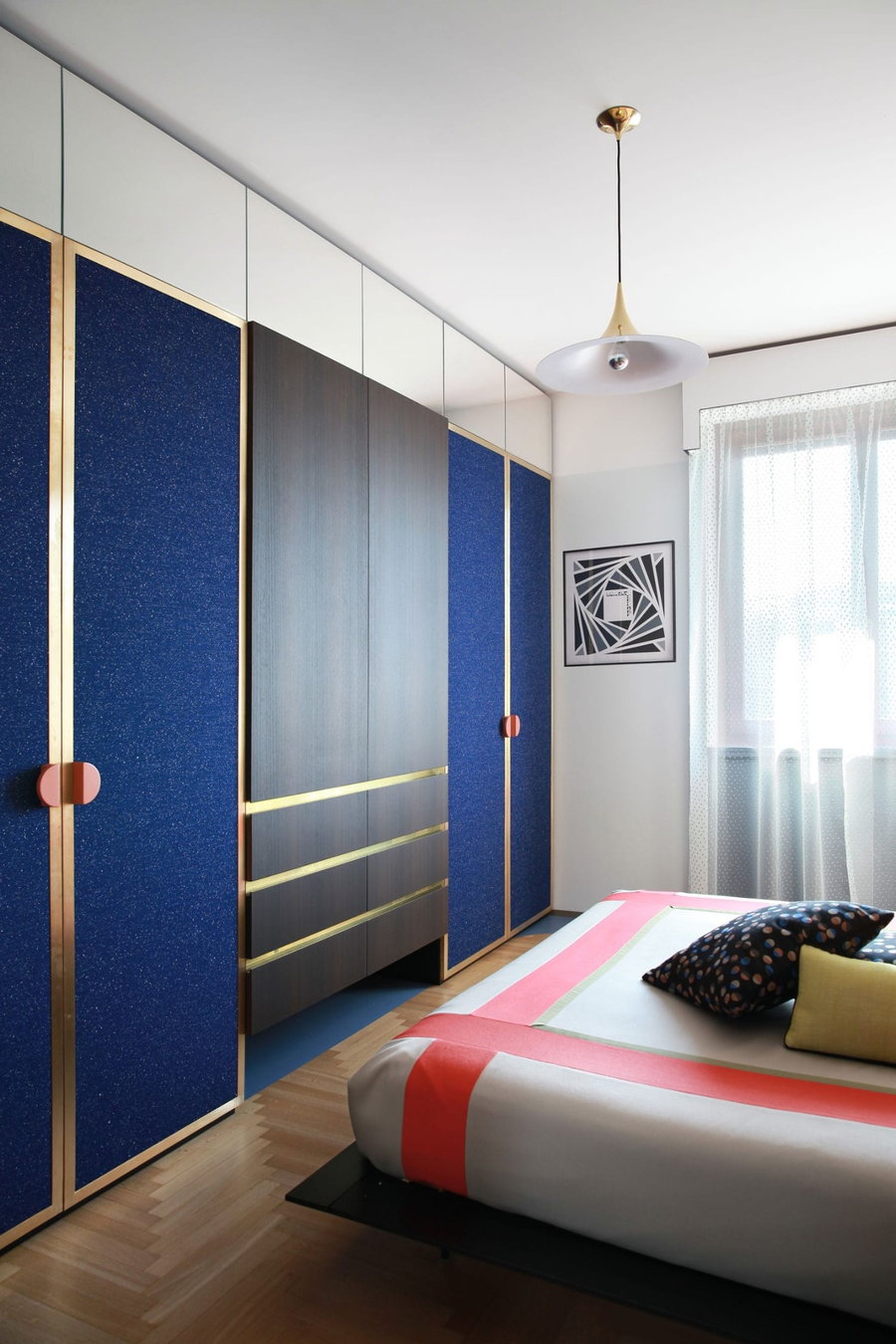 A write-up for the renovation on HomeWorldDesign reads: “The design of the marble slabs and the pattern of the veins within them create visual pathways, guiding the inhabitants through a pattern of precise spatial hierarchies. The floor joints also form the base for a screen in brass and glass, another custom-made piece, which acts both as a visual filter between the entrance and the dining area and also as a storage feature, and whose metal ‘arms’ indicate more intimate visual pathways between the apartment’s entrance, the kitchen, and the living area. The use of marble continues in the corridor and the bathrooms, again covering the walls to provide a luxurious backdrop and base for the washbasins, in gray ‘Salomè’ marble.”

The reflectiveness of the marble is echoed by that of the metallic accents and the diamond-shaped mirror set into the dividing wall. On the ceiling, a rose mimics the look of traditional ceiling ornamentation that you’d usually see in this sort of apartment in Milan, but updates it with geometric simplicity. 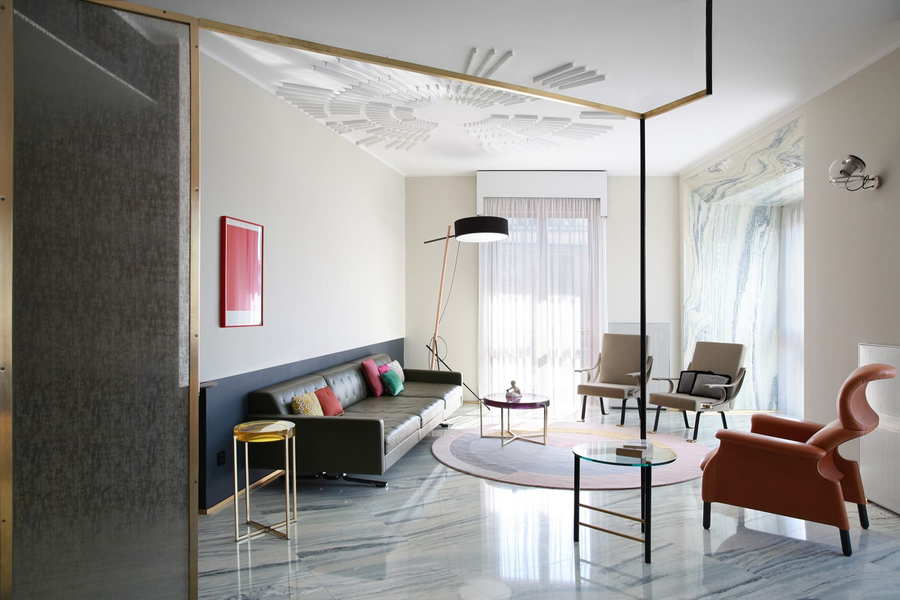 Part of the beauty of this project lies in its expert blending of styles and elements, producing something that feels truly original. As the architects draw from Italy’s mastery of marble, the clean-lined elegance of art deco, and the bright, playful style of Memphis design (which actually originated in Milan), they create a home that’s rooted in history and a sense of place, yet refreshingly new.