Not so long ago, toting around a kayak meant you pretty much had to own a car, be physically capable of hoisting at least 40 pounds up onto your roof rack, and have a large area to store the thing when it’s not in use. But packable kayaks have come a long way in the last decade or so, from inflatables to modular setups that break down to the size of a large suitcase. These portable models all have their pros and cons, but they make it a lot easier for the average person to get out on the water (especially if you’re a city dweller with a small apartment who relies on public transit). Now, an Indiegogo campaign is raising funds for what might be the lightest kayak yet: the Pontos, which weighs a mere 7 pounds. 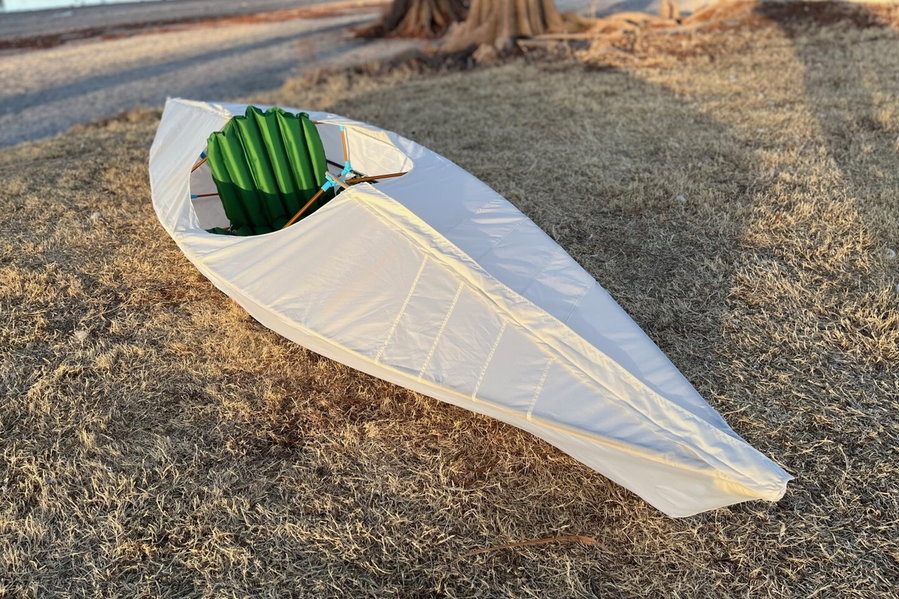 As you can see, the Pontos looks a lot like a tent in the shape of a kayak. It has a similar lightweight frame sheathed in waterproof nylon and an inflatable seat that closely resembles a sleeping pad. That was part of the inspiration behind this unique design. The creators wanted performance on the water and packability on land, perfect for traveling or impulsive paddles after work. And it doesn’t just fit inside your car – it fits in your closet, suitcase, and even your backpack, just one-third the size and weight of the next-smallest portable kayak when packed down. 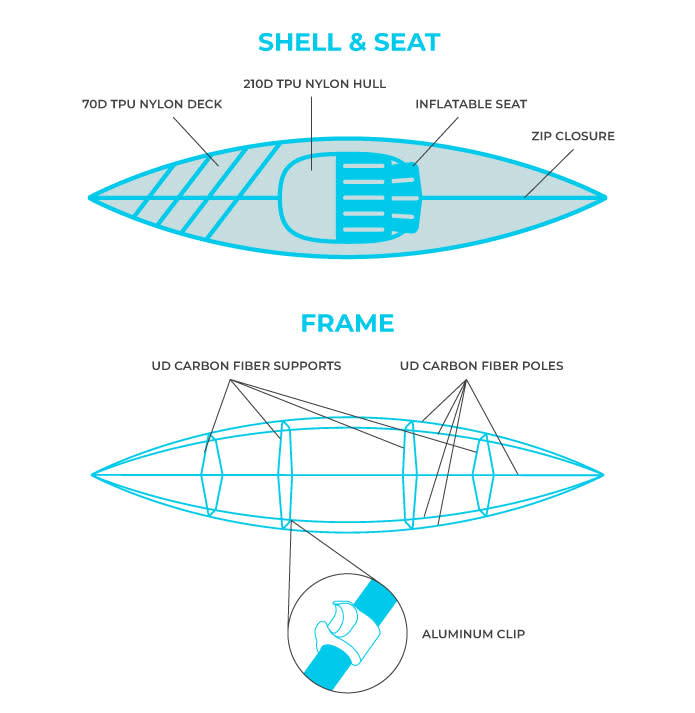 “We believe that the benefits of outdoor recreation and a connection with nature should be available to everyone, and we’re here to help knock down some traditional barriers,” the creators write on Indiegogo. “For paddle sports, those barriers are often storing, transporting, and deploying your vessel. We’ve simplified all of these by combining the concept of a skin on frame boat with new durable lightweight materials. At just seven pounds, Pontos kayaks are far lighter than existing folding and inflatable kayak options, which weigh anywhere from 20 to 45+ pounds, and [they’re] more affordable, too! With a pack down size similar to a two person tent, Pontos is the first truly packable kayak.”

Naturally, a kayak this lightweight is designed for calm waters, not whitewater conditions. Those who prefer the latter will have to stick to their more conventional kits for now. But a good deal of thought has gone into the design to make it just as reliable and easy to use as a standard kayak. The lightweight carbon fiber frame, which consists of 18-inch sections connected with shock cord, gives the boat its structure. Once on the water, the “keel pole” presses the TPU-bonded nylon shell just enough into the water to provide excellent tracking. Other portable kayaks are often flat on the bottom, which causes fishtailing as you paddle. 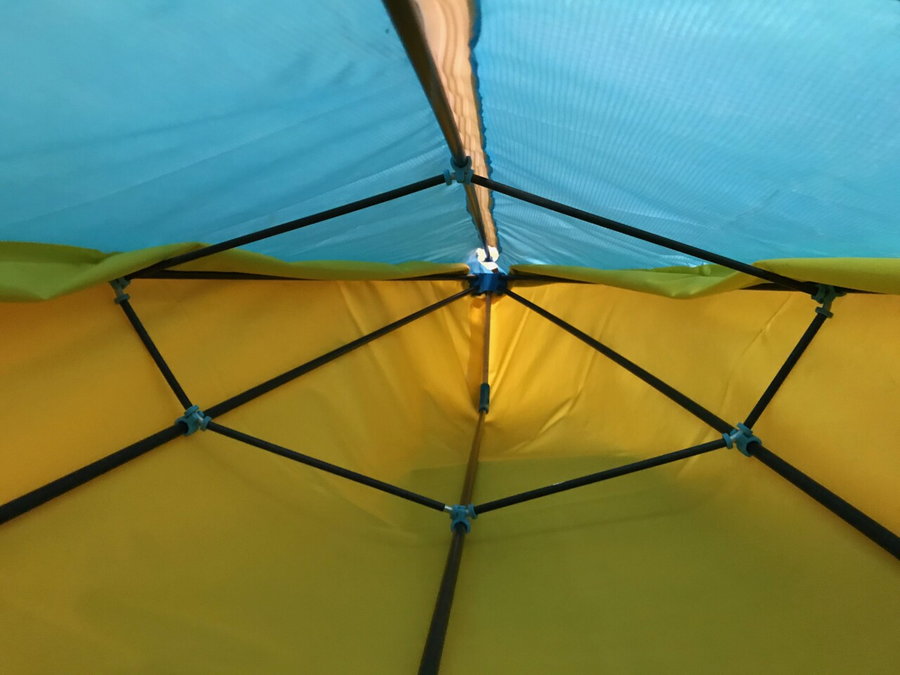 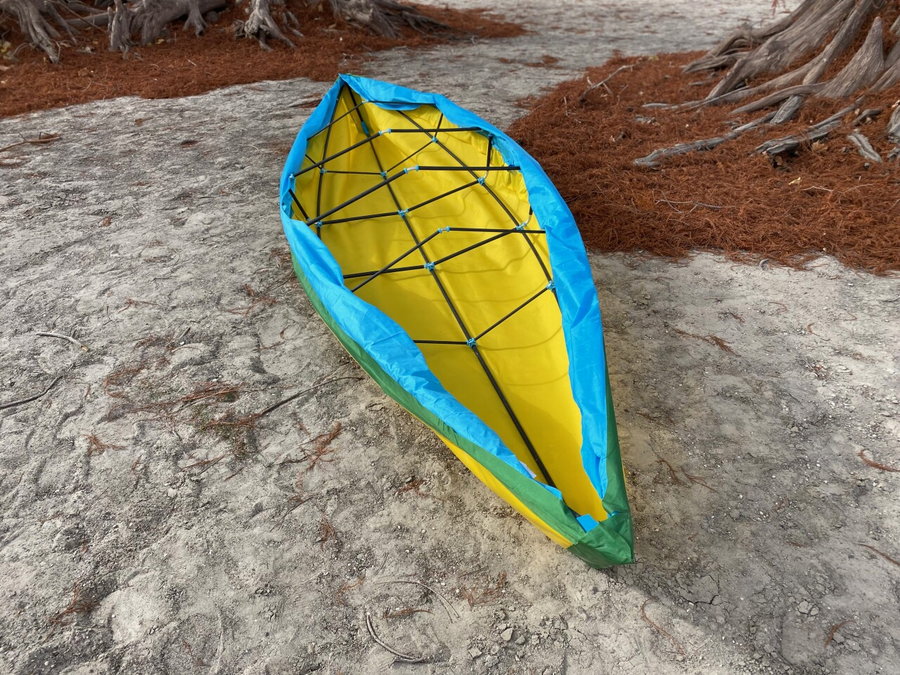 The Pontos’ shell easily pulls over the assembled frame and zips along the top, so it takes just a few minutes to put it together. The 210 denier nylon used for the shell also has some advantages over the heavy plastic usually used for inflatable kayaks. Inflatables are generally hard to pack down to a small size and even harder to get completely dry after use, which makes them prone to developing mold. On top of that, inflatable packrafts also require an additional device for inflation – or a serious test of your lung capacity after a hike.

Currently, the Pontos is available for pre-order via Indiegogo for $497, a 13 percent discount off the expected retail price of $575. It comes in five shell styles in shades of beige, green, blue, and yellow. The crowdfunding campaign will raise funds to order the components and hire a team to finish production, and the boats are expected to ship by June.