On May 31st, 2020, the artist Christo Vladimirov Javacheff, better known simply as Christo, passed away at home in New York at the age of 84. Immediately after, some people posed the question “if all your art is temporary, what can you leave behind?” Still, it’s all but certain that Christo’s legacy will long outlast the temporary large-scale installations he created with his wife and collaborator, Jeanne-Claude, who died in 2009. That’s what photography is for — and Christo documented many of their works himself. But ultimately, as far as they’re concerned, permanence is inconsequential. 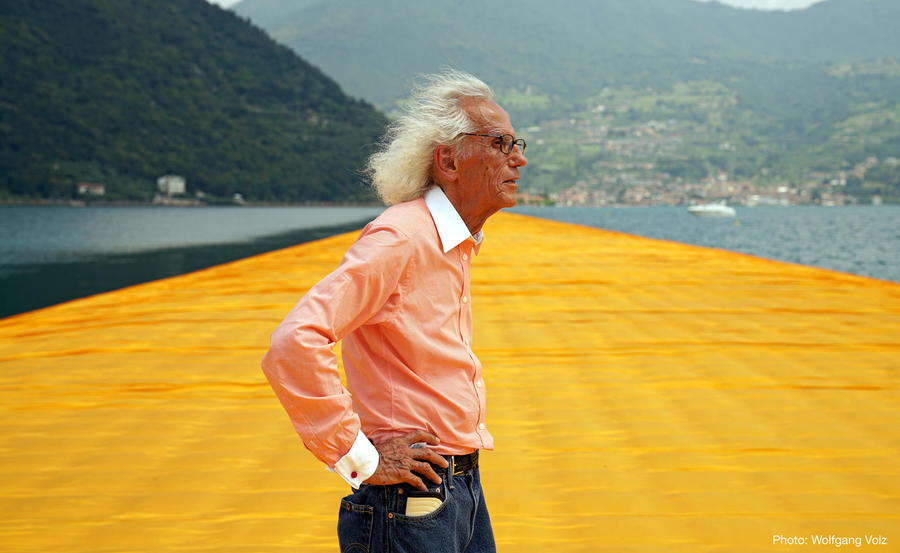 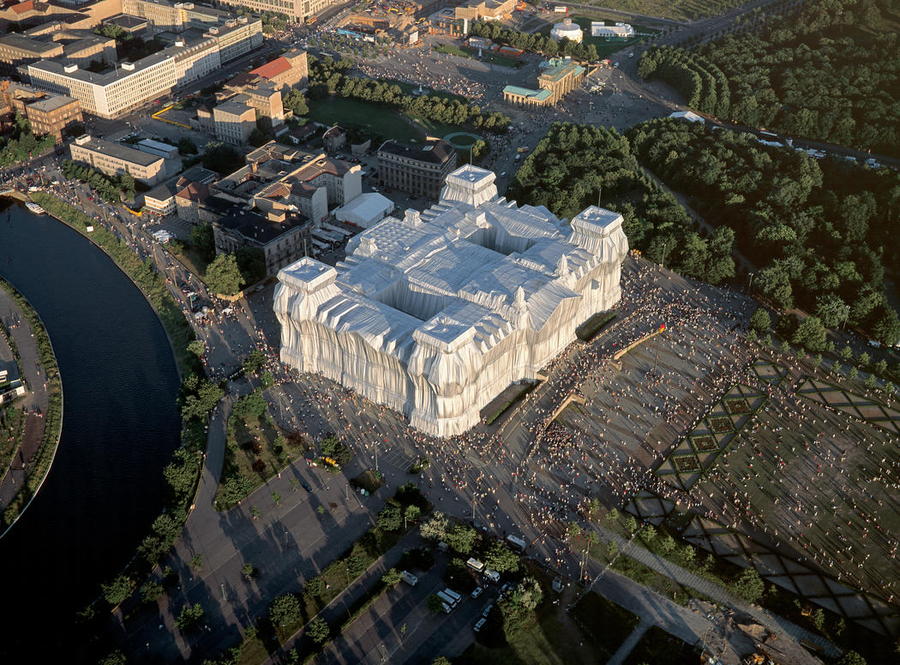 Christo and Jeanne-Claude’s projects dramatically transformed the most unexpected public places, often in surprising ways. Take “Wrapped Reichstag,” for example. In June 1995, the duo finally manifested almost two decades of planning by completely enshrouding the Reichstag building in Berlin with 1,076,390 square feet of silvery fabric and 9.7 miles of blue ropes. The effect was dramatic, especially when illuminated at night, drawing massive crowds.

“The Reichstag stands up in an open, strangely metaphysical area,” the artists write. “The building has experienced its own continuous changes and perturbations: built in 1894, burned in 1933, almost destroyed in 1945, it was restored in the 60s, but the Reichstag always remained the symbol of Democracy. Throughout the history of art, the use of fabric has been a fascination for artists. From the most ancient times to the present, fabric forming folds, pleats, and draperies [have been] a significant part of paintings, frescoes, reliefs and sculptures made of wood, stone, and bronze.” 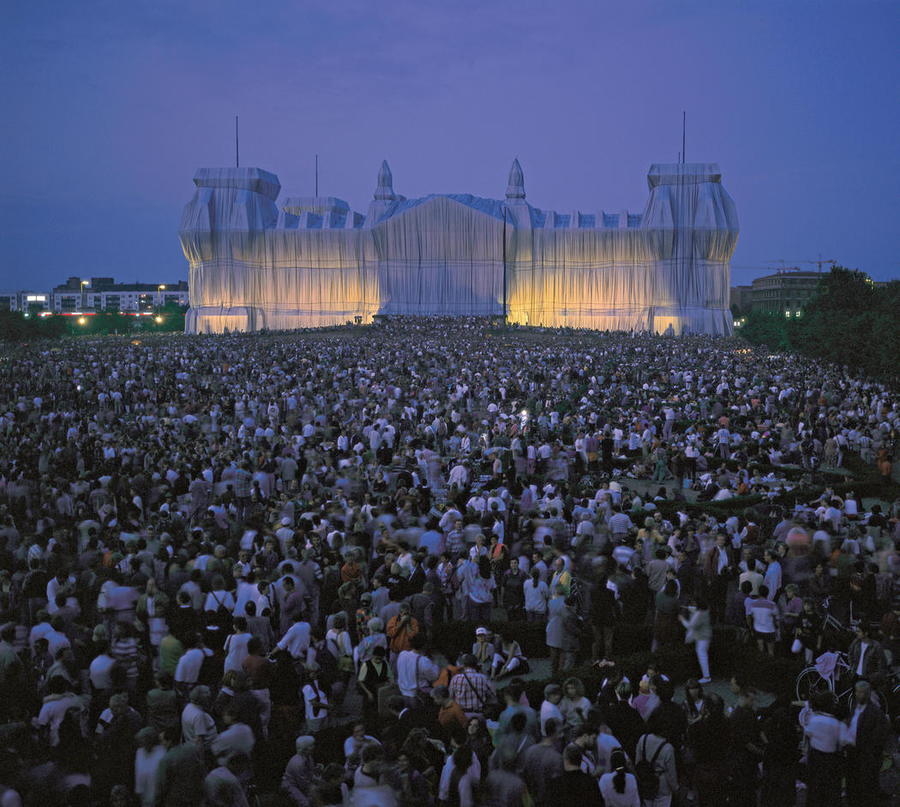 “The use of fabric on the Reichstag follows the classical tradition. Fabric, like clothing or skin, is fragile; it translates the unique quality of impermanence. For a period of two weeks, the richness of the silvery fabric, shaped by the blue ropes, created a sumptuous flow of vertical folds highlighting the features and proportions of the imposing structure, revealing the essence of the Reichstag.” 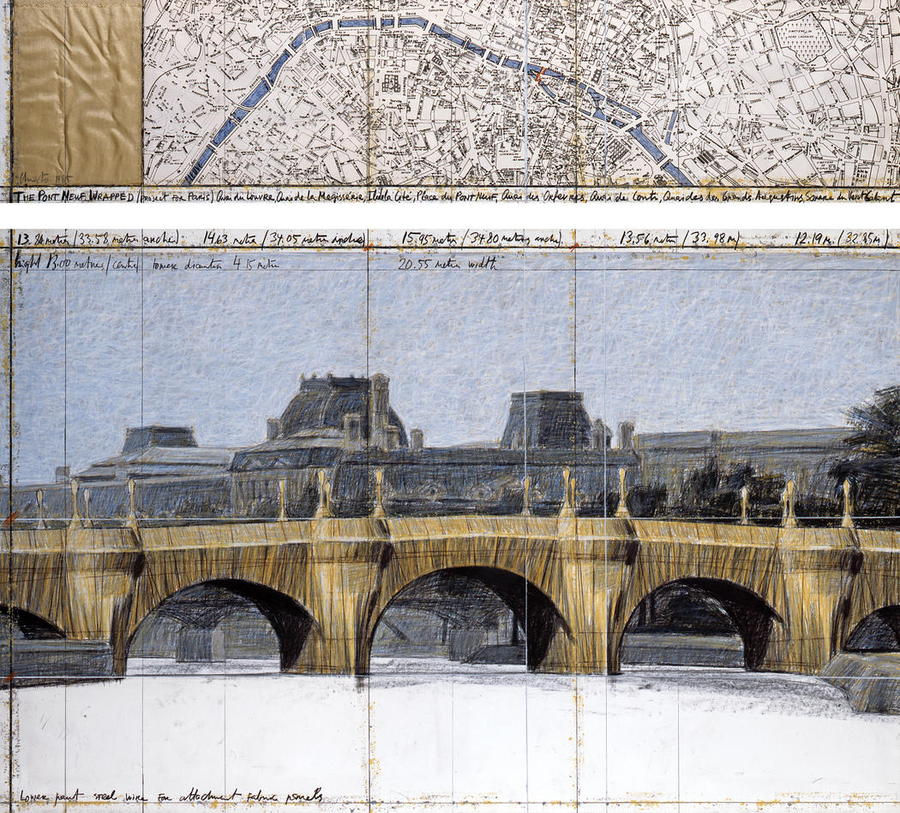 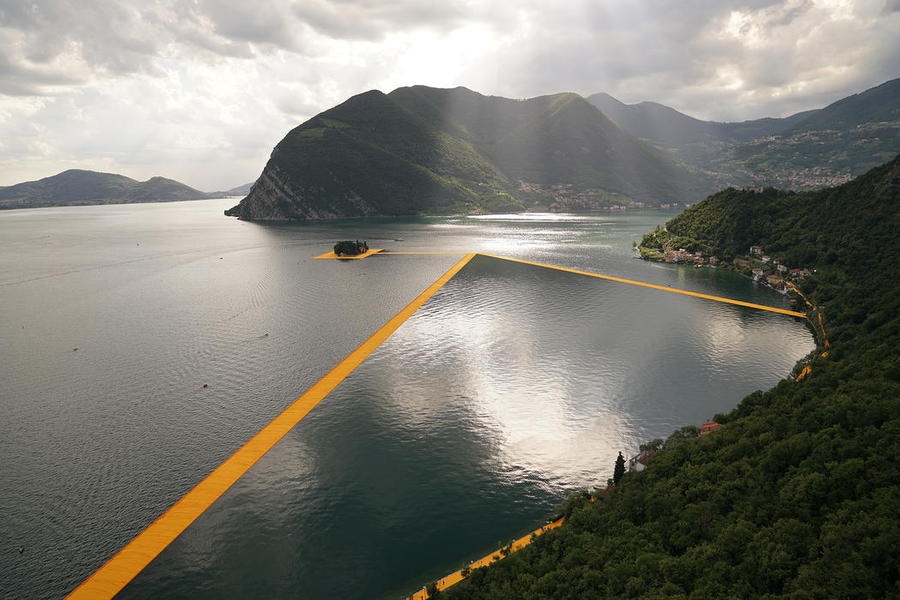 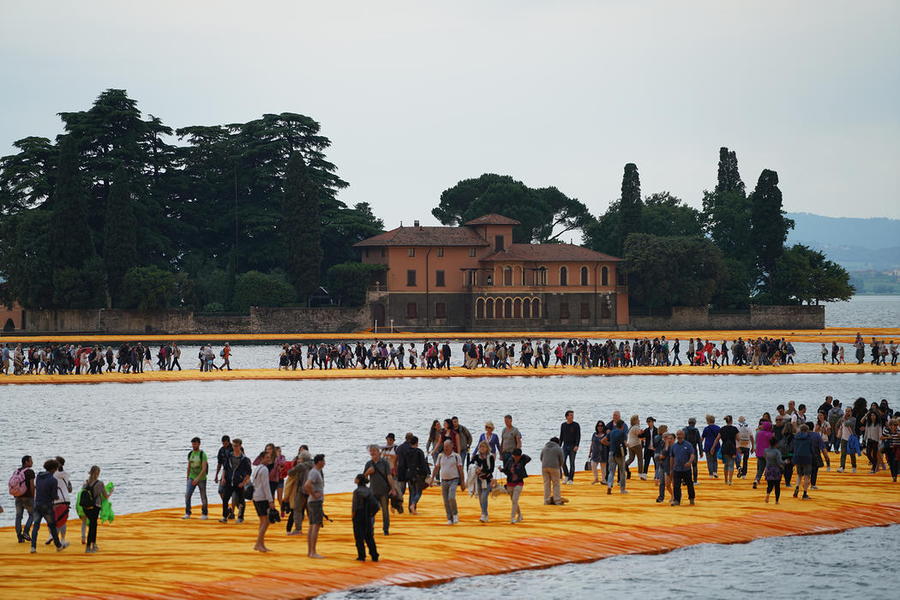 The duo similarly wrapped Paris’ Post Neuf in fabric, and installed thousands of orange gates in New York’s Central Park. “The Floating Piers” placed yellow fabric carried by a modular dock system across the surface of Italy’s Lake Iseo, giving visitors a new way to interact with the environment. “Surrounded Islands” outlined tiny islands in Miami’s Biscayne Bay with pink fabric. “Running Fence” sent a gossamer ribbon through 24.5 miles of California’s Sonoma and Marin counties. These are just a few of the artists’ most iconic realized installations. 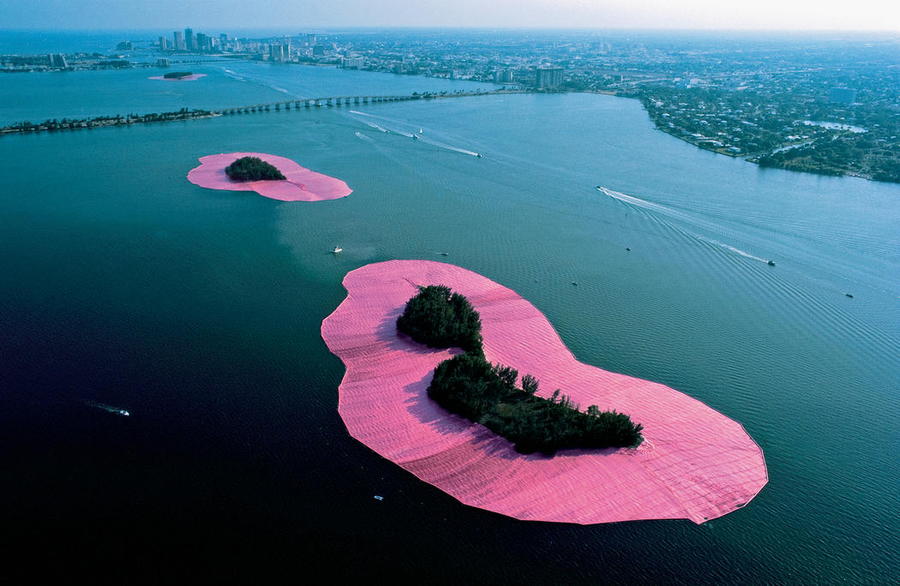 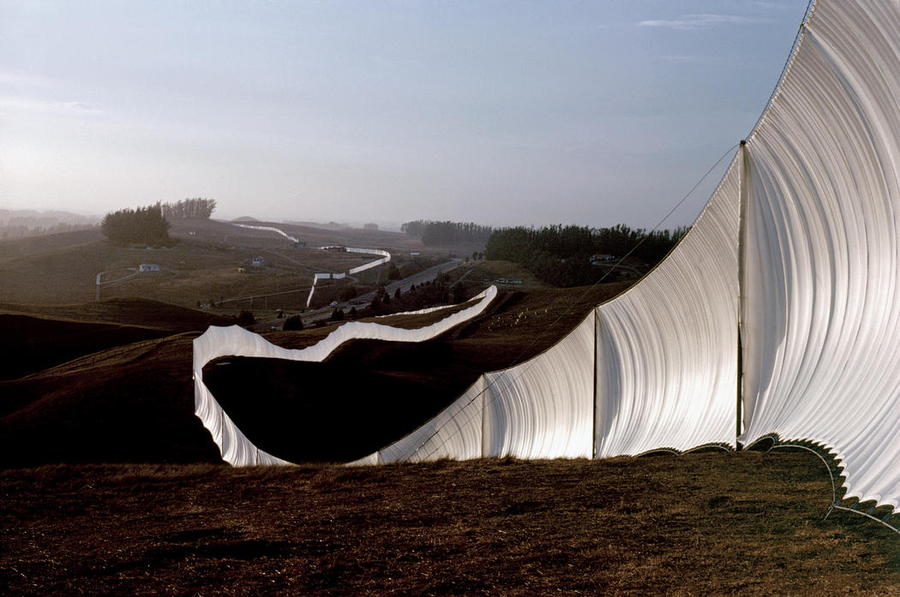 Many more works received similar levels of planning and care, but never came to be, like “Wrapped Monuments,” a project they hoped to carry out at various locations around the world. You can see the drawings and read the concepts for these projects online. The artists funded almost all of their works themselves through the sale of preparatory drawings, studies, collages, and scale models, eschewing all sponsorship. 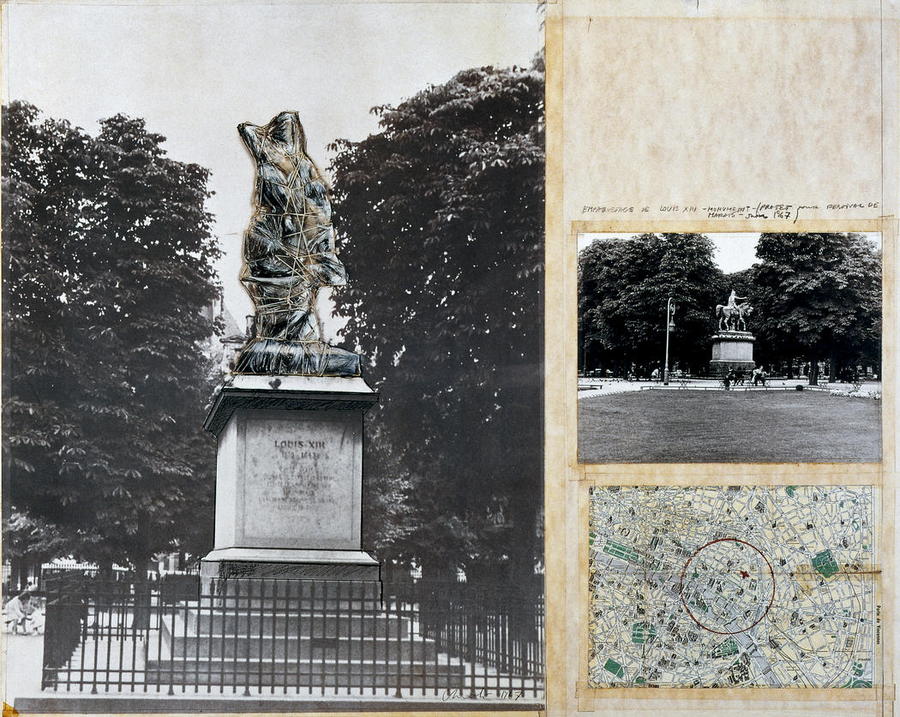 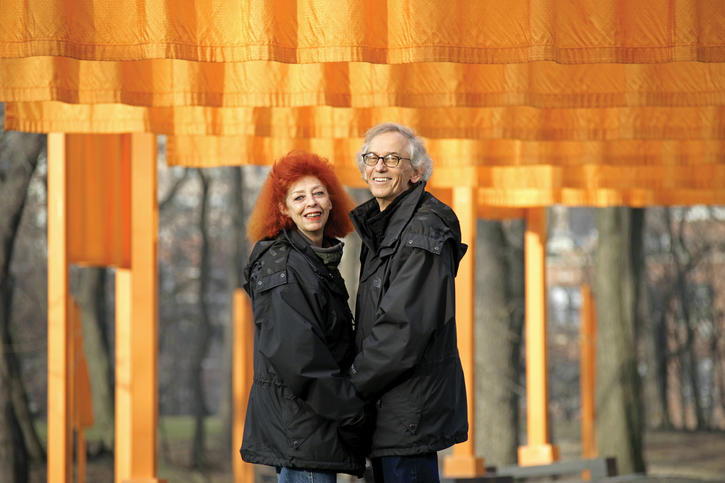 We haven’t seen the last of Christo yet. At the time of his death, he still had several works in progress, including a larger version of “The Mastaba,” a pyramid-like sculpture made of oil barrels previously seen in London in 2018. It’s set to be built in the Abu Dhabi desert, and when complete, it will be both his first permanent installation and one of the largest sculptures in the world, measuring 11 feet taller than the Great Pyramid of Giza. And in September 2021, Paris’ iconic Arc de Triomphe will be wrapped in blue fabric, as Christo had dreamed of doing or many years.