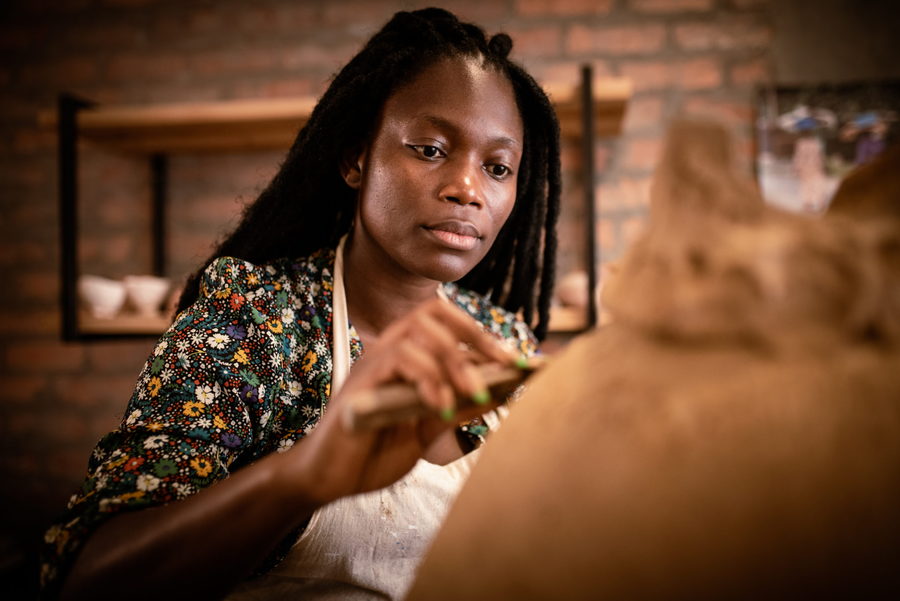 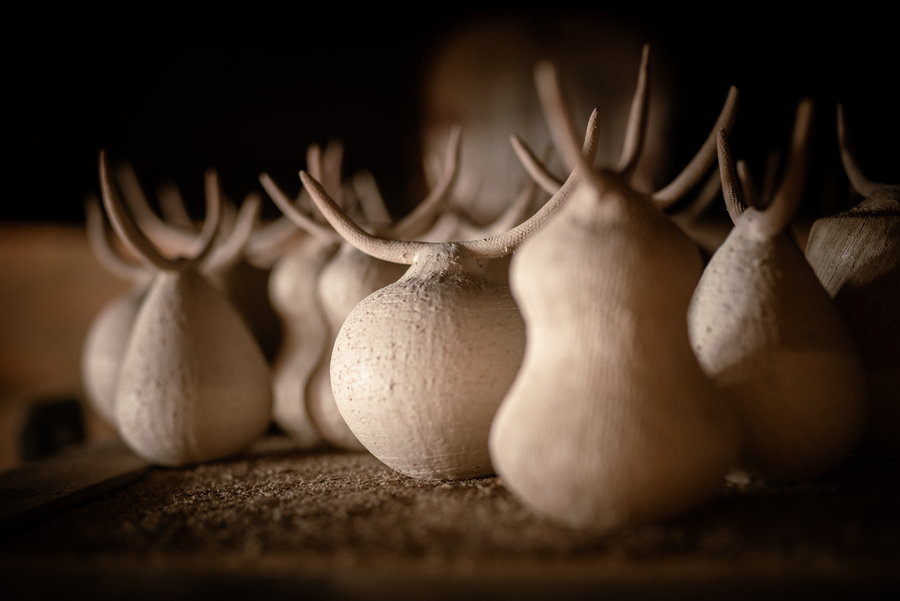 Presenting at the country’s Southern Guild, her 12 massive and unique sculptures are collectively titled “iLobola,” the name for traditional South African marital negotiations between families to pay for a bride. Up until recently, that payment most commonly came in the form of cows, as represented in Poswa’s art by the horns attached to each piece.

“I knew I wanted to tell a story about ilobola,” says Poswa, who often draws on her Xhosa heritage in her work. “Because I was clueless, I needed to know how the whole process works, especially because this is something that would be a part of my life; if I’m not the one for whom lobola will be paid, then it will be for my daughter, or if [I have a son], he is the one that will pay lobola. So, somewhere, somehow, I will be involved; It’s part of who I am, it’s my culture.” 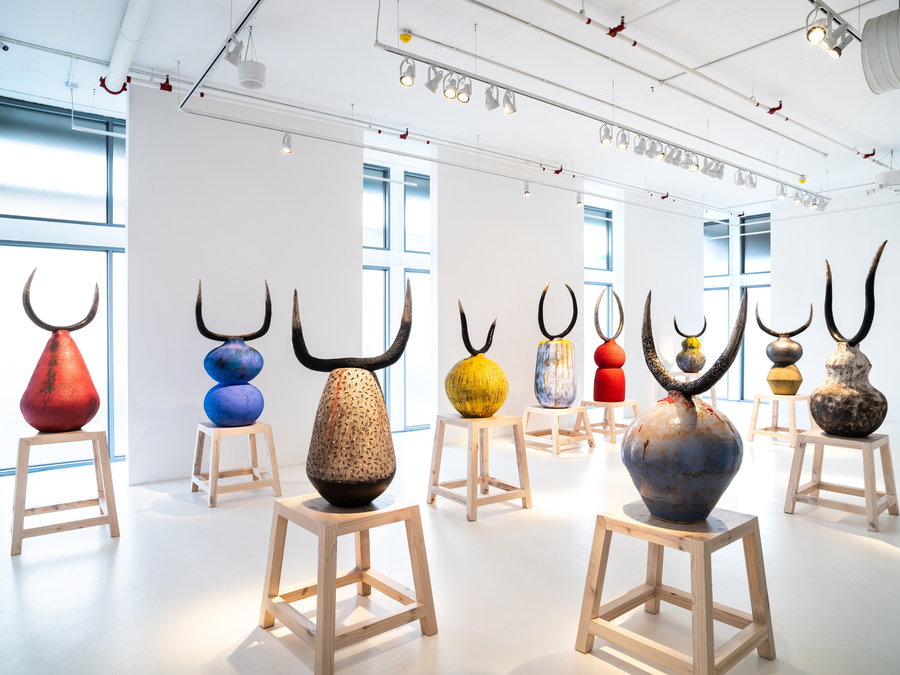 In the commercial economy of South Africa today, cows are no longer the main source of income for most tribe members, so cash is frequently exchanged instead as bride-wealth. And though some may raise criticism that the lobola custom treats women like a commodity, Poswa unapologetically defends it for its unifying abilities. Its purpose, she says, is “ukwakhiwa kobuhlobo,” or the building of relations between the two families.

“During the negotiation process, the families really get to know each other. They talk about what bonds the couple together and even identify potential pitfalls to the marriage. When the couple faces problems down the line, they have this safety net to turn to. I think it’s a really beautiful structure that brings stability,” she explains. 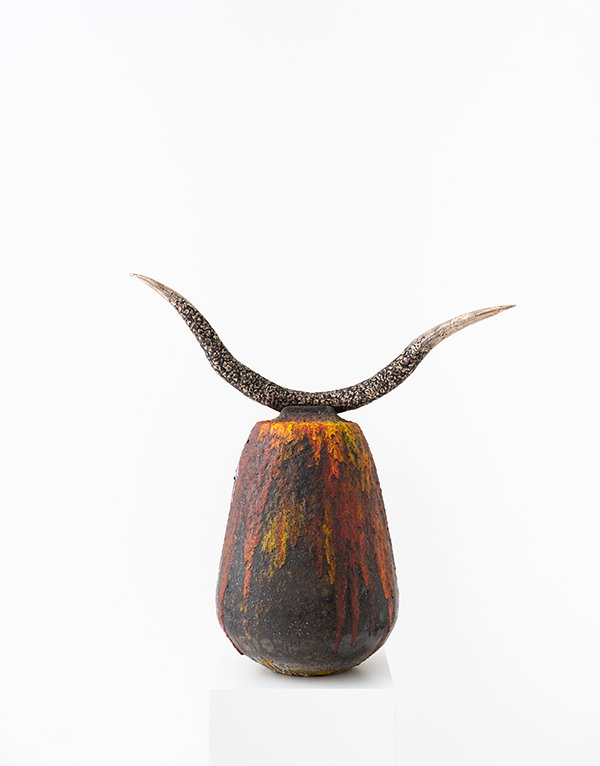 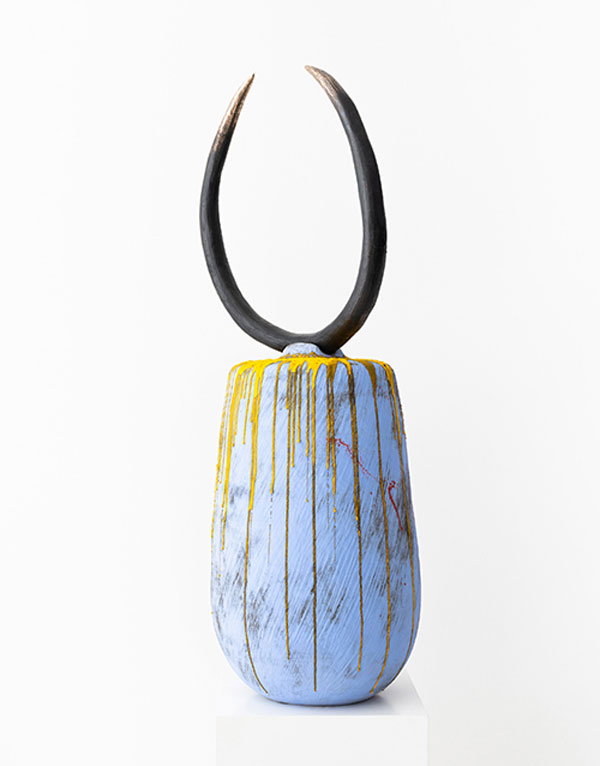 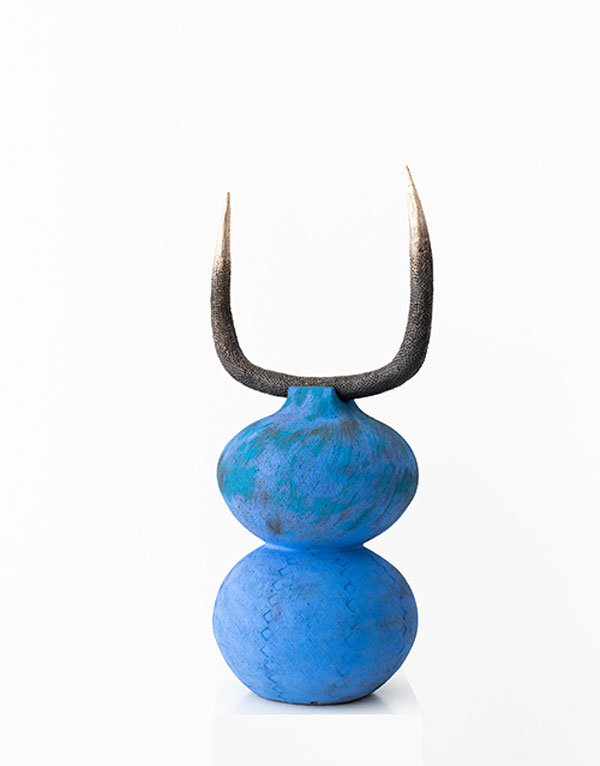 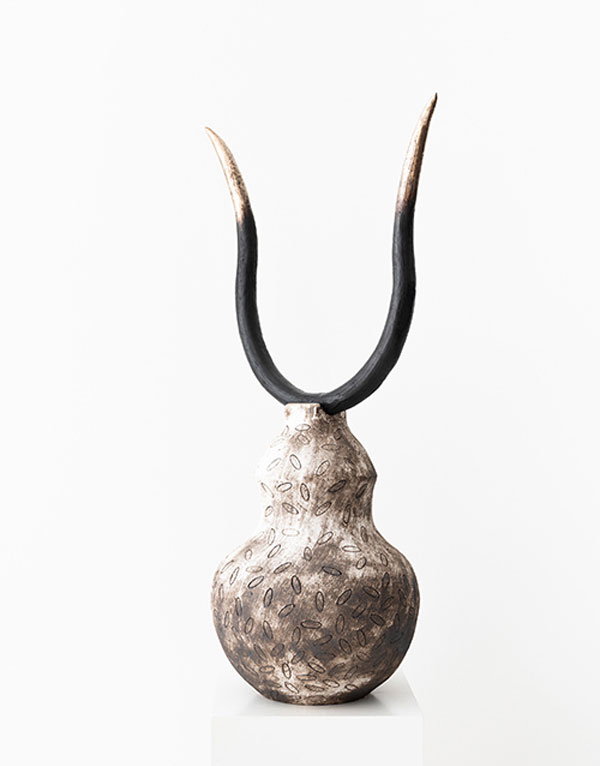 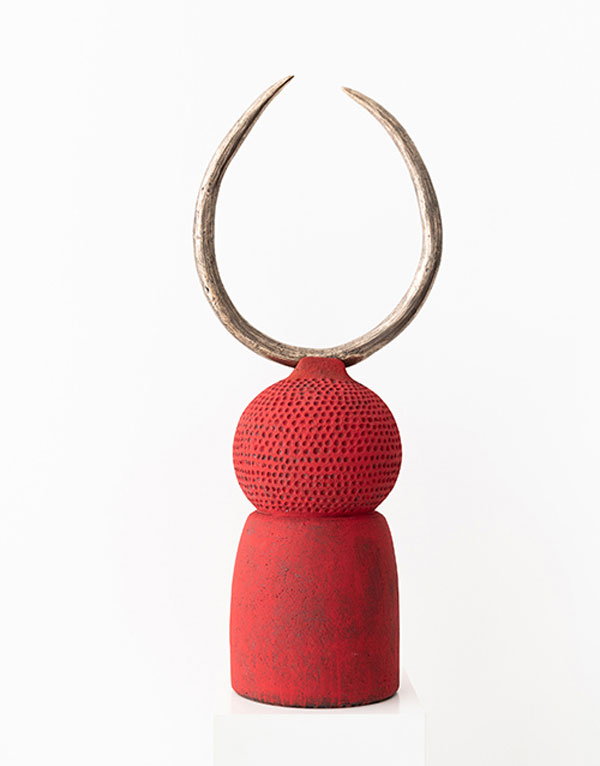 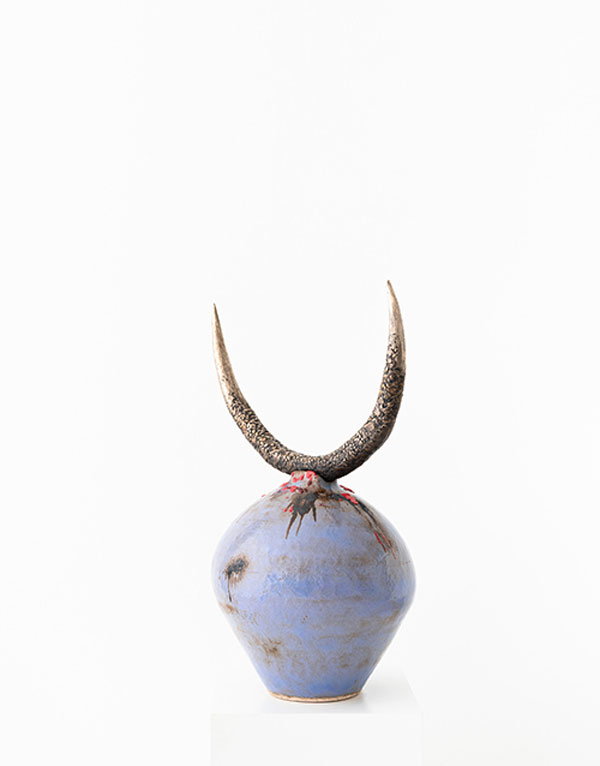 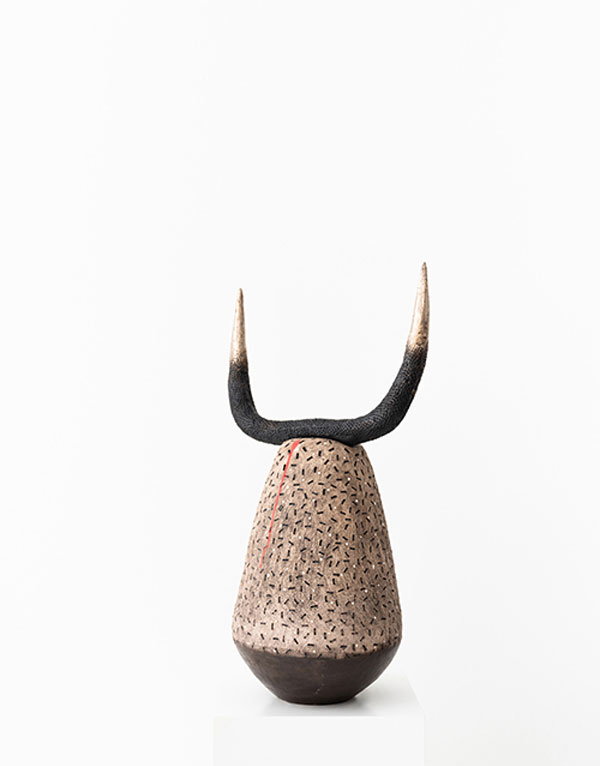 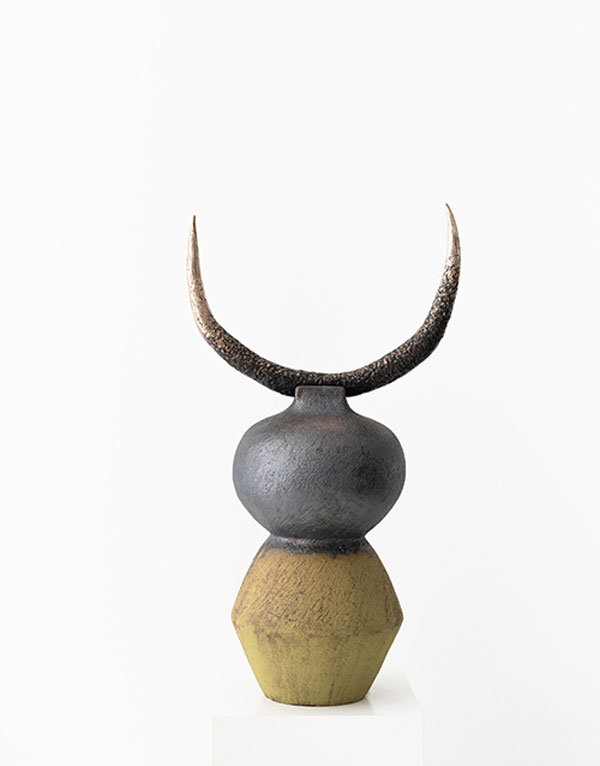 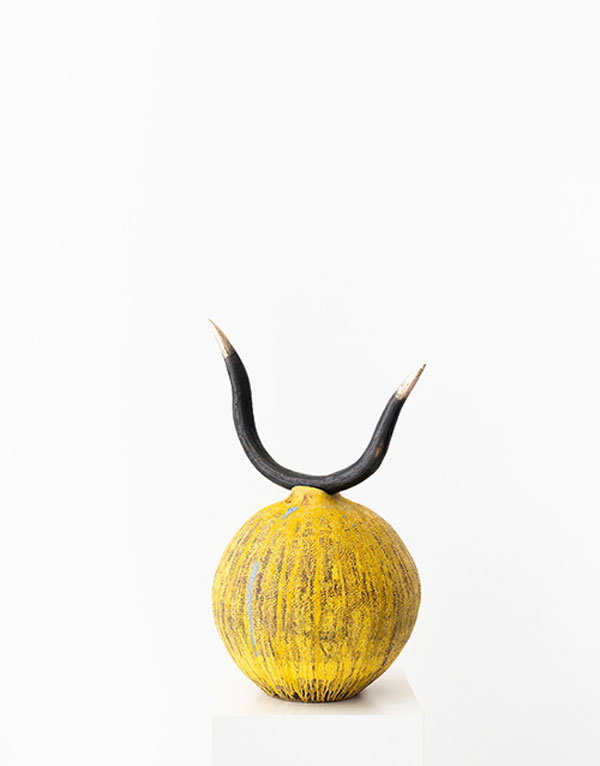 The statues are all roughly six feet tall and feature bright colors and patterns, along with individually shaped bases that hint at various human and animal forms. Constructed from hand-coiled clay and combined with cast bronze, the collection is just the latest in the Cape Town native’s career spent honoring her culture. One of her earlier anthologies, “Umthwalo,” paid tribute to the traditional women tasks of “gathering wood, collecting water, and taking bucket loads of clothing to the river for washing.” Another series, “Magodi,” looked at the sculptural forms of traditional African hairstyles. And of course, her “Ukukhula” pieces, themselves an examination of conventional male and female roles, were acquired by the Los Angeles County Museum of Art (LACMA) in 2019. 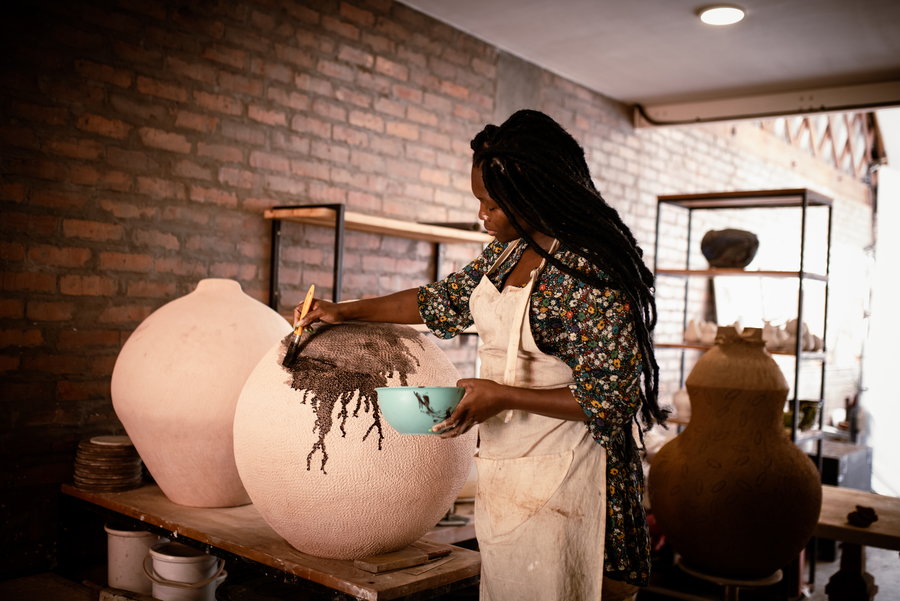 “There are many things you can call me,” Poswa notes. “I’m an artist, a businesswoman, a breadwinner, I am a mother, a daughter, a sister, and a survivor. My inspiration comes from my culture, and from the path I walked as a woman. I am the woman I am because of my heritage. I stand in tribute to the other women who have shared the load…I celebrate my heritage, and I forge my own way: my work is an act of intention, and this is what must be known about African women.”

Born in 1979, the artist studied surface deign at the Cape Peninsula University of Technology before opening the Imisa Ceramics studio with fellow ceramicist Andile Dyalvane in 2006.

Of her artistic process, Poswa explains that “working with clay is like a dance, it will follow if you lead it. But once it goes in the kiln, anything can happen. It’s like a grown-up child: you have to let go.”

More photos of “iLobola” and Poswa’s other work are available on her Instagram page @zizipo_poswa.