If you’re an outdoor adventurer who’s ever had to agonize over choosing between your camping gear, a bicycle, or a boat before embarking on a trip, this weird mashup is for you. The Zeltini Z-Triton takes three objects that would normally take up a ton of space on their own and combines them into a hilarious-looking — but ultimately pretty functional — amphibious vehicle. 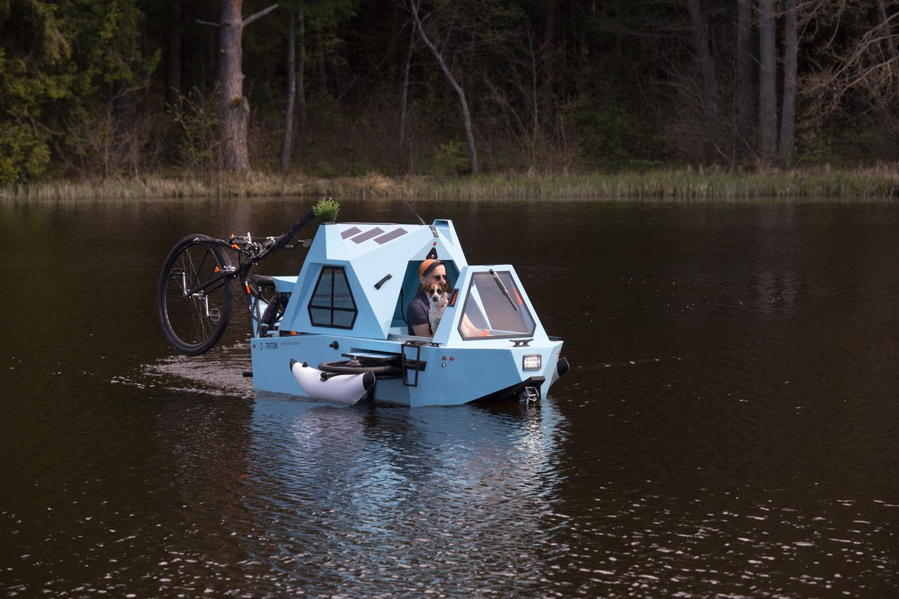 Zeltini describes it as a “house-boat-trike” or “tiny amphibious home/camper,” and it’s all of those things. Far more compact than any conventional camper, it’s capable of doing a lot more than just cruising down country roads on the weekends. It also contains far more than meets the eye. But best of all, it can seamlessly transition from land to water and back again, giving its users the kind of adaptability we can usually only dream of. 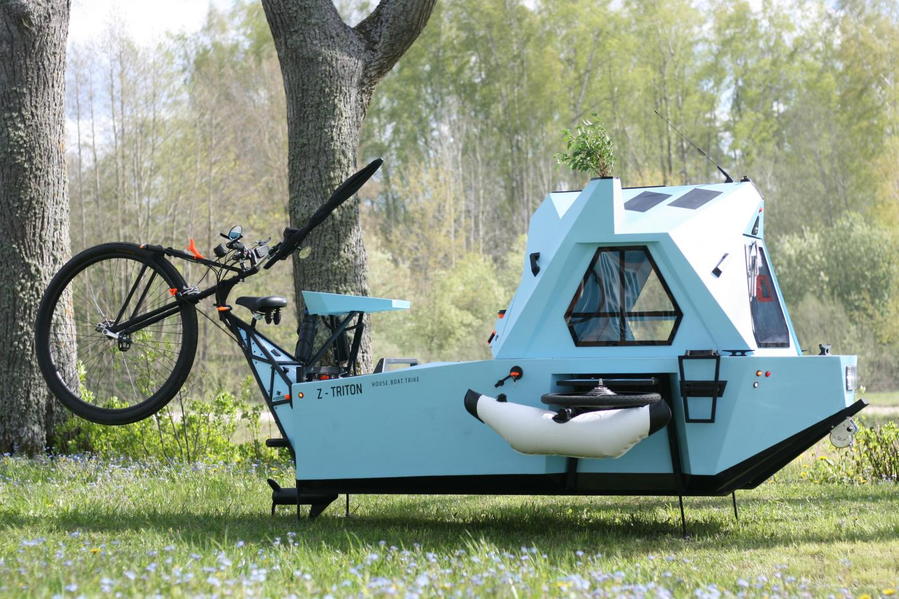 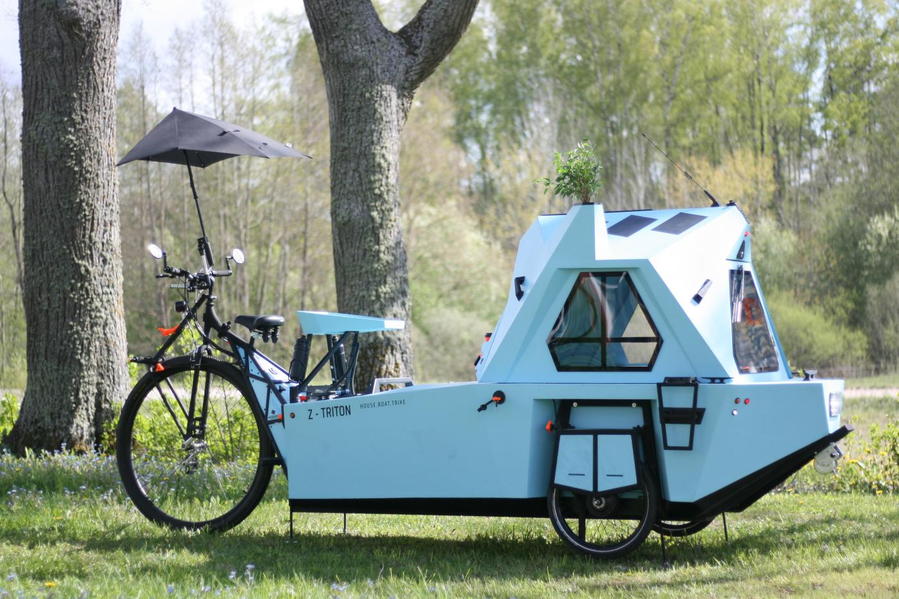 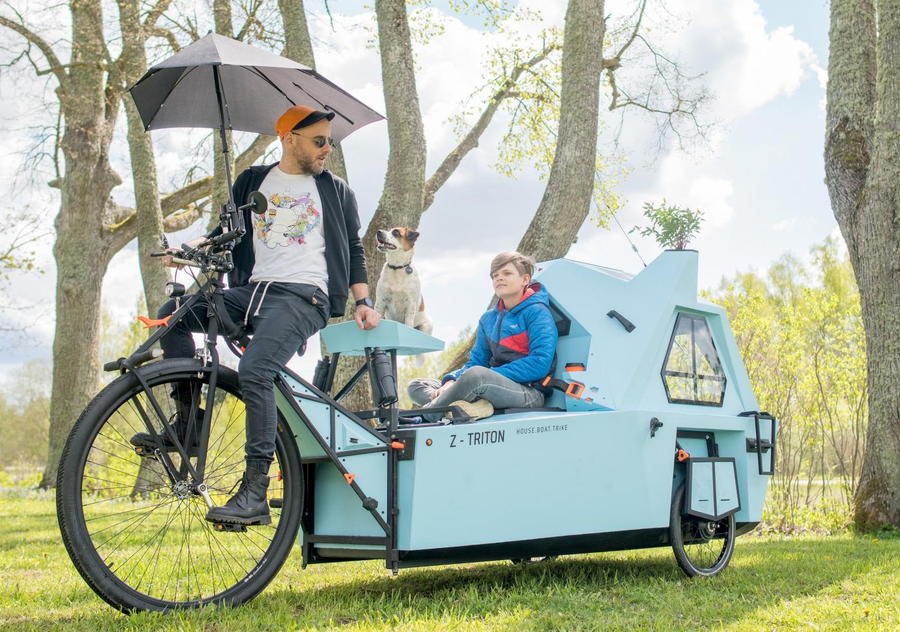 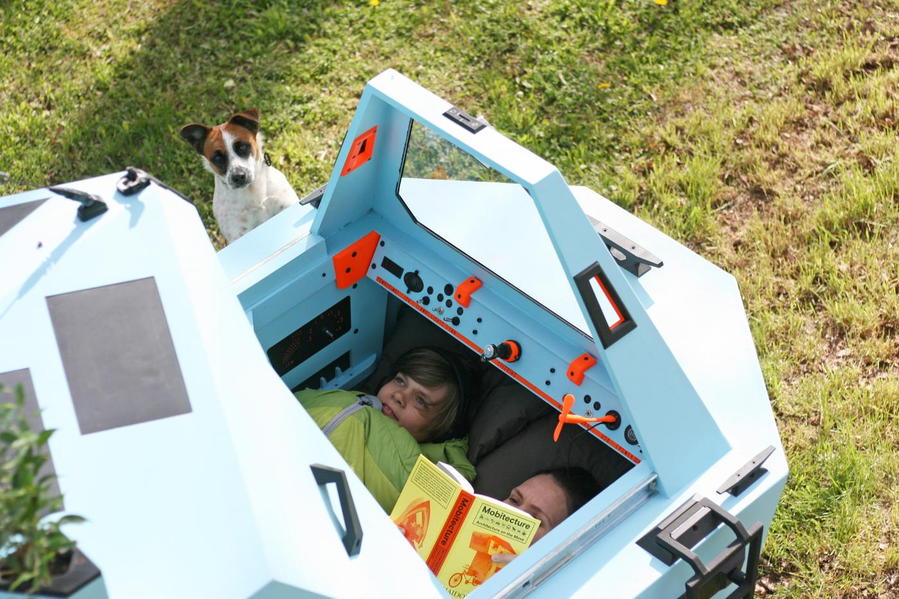 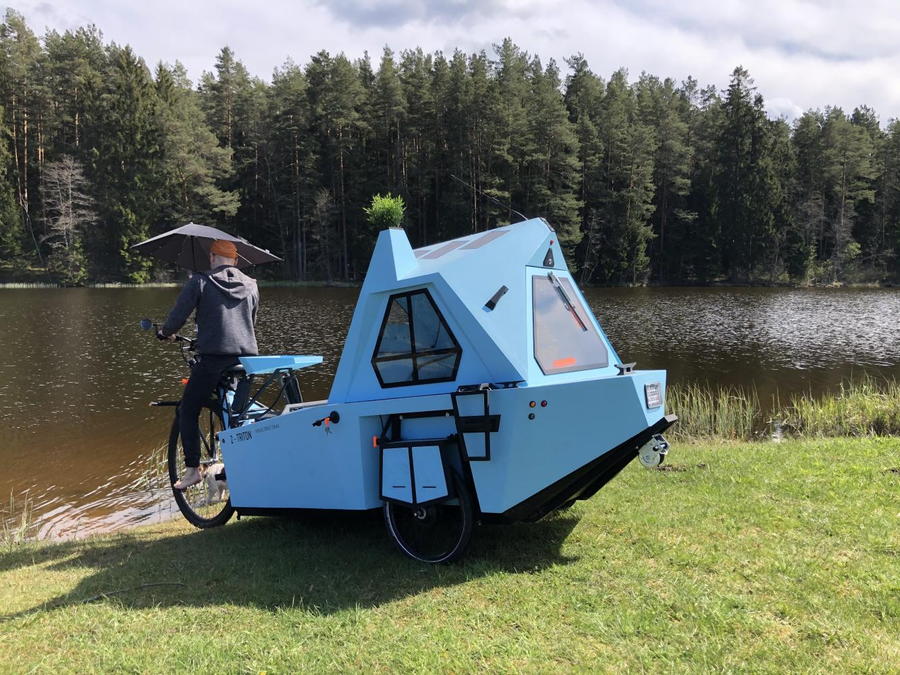 Designed for two people, the Z-Triton is equipped with two electric motor hubs, an electric outboard engine, and 250 watts worth of solar panels. It has three wheels: one in the front and two in the sides, all of which can fold up when the craft hits the water. When that happens, the “back end” of the bicycle camper becomes the front of the boat. When it’s time to head back home, the bike can easily carry the lightweight body of the camper/boat along the road, with a little electrical assistance, to boot. It’s capable of traveling up to 25 miles on land or 19 miles on water. 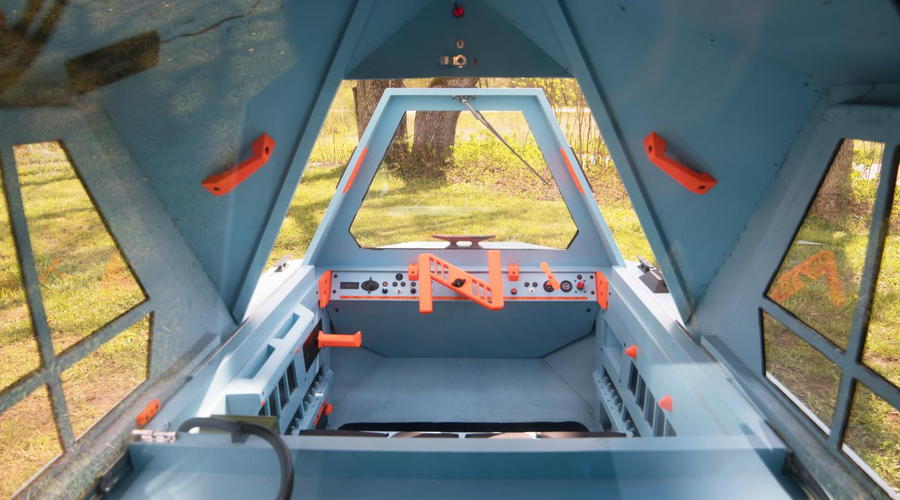 One of the not-so-great aspects of camping is the need to lug around a ton of separate gear, unpack it when you reach your destination, and then pack it back up again. If you’re camping in more than one spot, you’re repeating that process multiple times on a single trip, which gets old fast. The Z-Triton offers a sleeping pod for two people, eliminating the need for a tent, as well as an entire fold-up kitchen. Almost everything inside is modular, too, so you can remove things like the benches and tuck them away when you don’t need them.

Its blocky proportions aren’t exactly aerodynamic looking, and the overall aesthetic is reminiscent of retro Soviet design, but in a fun way. There’s even a live plant sticking out of the roof, which… sure, why not? 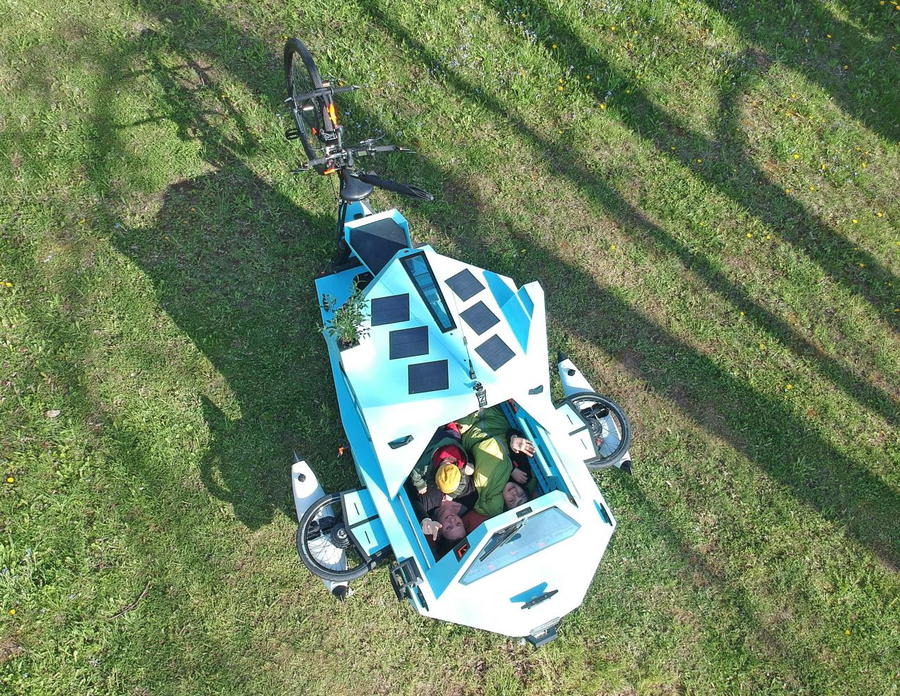 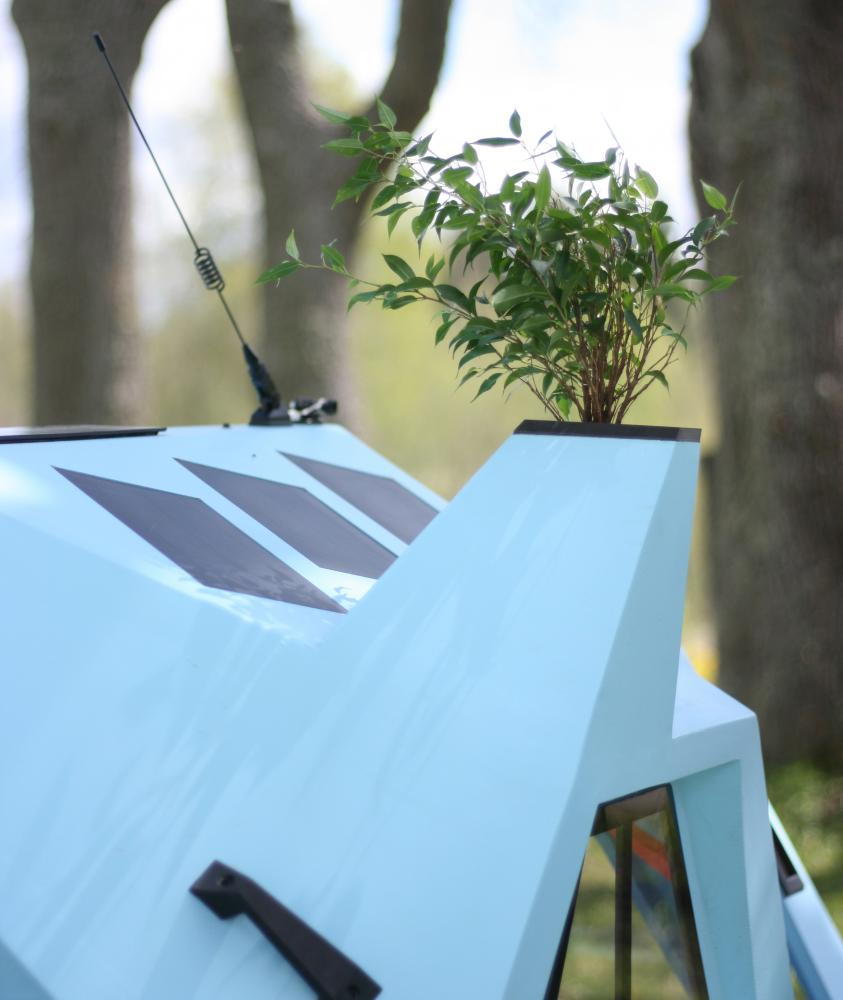 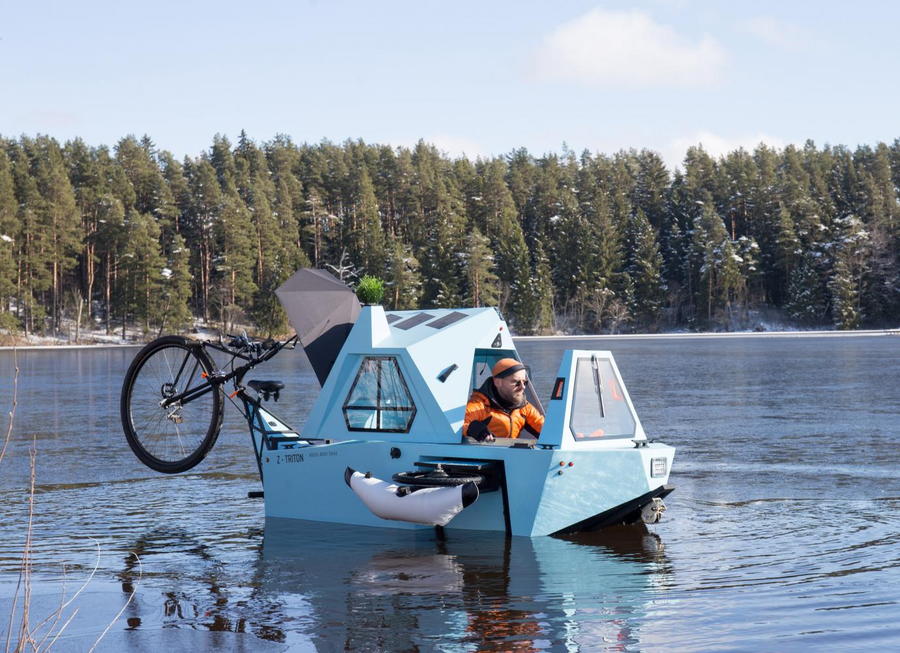 Is it kind of goofy? Absolutely. It sort of looks like it belongs in Wes Anderson’s The Life Aquatic with Steve Zissou. It’s easy to imagine Bill Murray piloting it while wearing that little orange beanie. But unlike a lot of other oddball creations, this is a real product with a working prototype, and its creators hope to make it available for rent to the public in 2021. 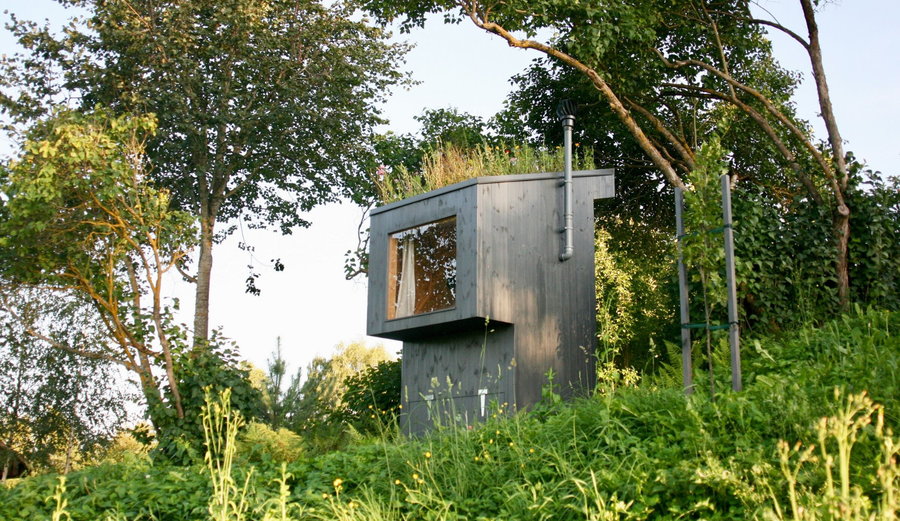 Latvia-based Zeltini is known for its unusual designs. Previously, they unveiled their “Temple of Poop,” a modern outhouse made of wood that’s elevated above the landscape with a giant pane of glass offering beautiful views to enjoy while doing your business. Built on the designer’s property, it composts human waste into fertilizer for its own rooftop garden.