On November 18th, 2020, wildlife officials spotted a mysterious monolith in the Utah desert while counting bighorn horn sheep from high up in a helicopter. Almost immediately after, another one popped up in California. Then Romania. Then a remote island off the coast of England. 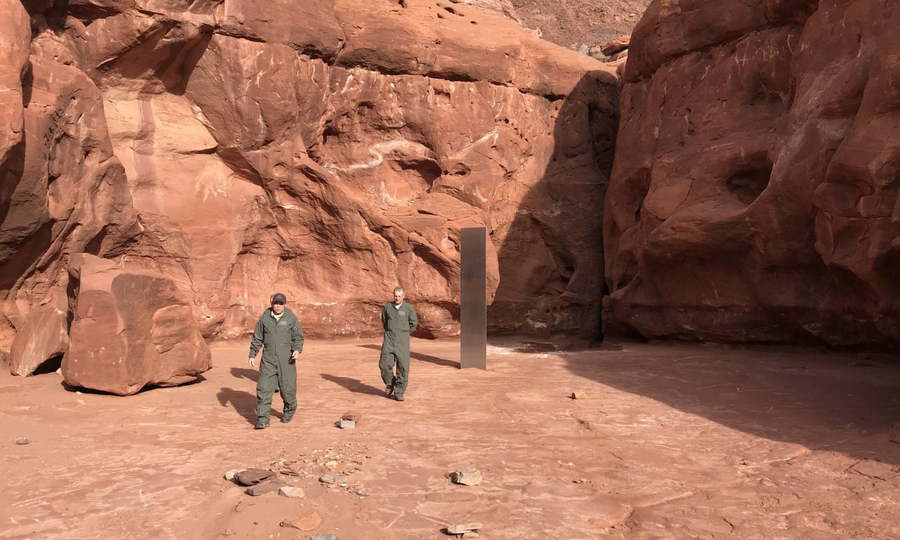 So who’s responsible for these weird mirrored creations resembling the alien monolith prop from Stanley Kubrick’s 2001: A Space Odyssey? The internet has gone wild with theories, and now we have some answers. Or do we?

The original monolith, a rectangular column standing just over nine feet tall, lurched into the public consciousness on November 23rd when the Utah Department of Public Safety first posted about it on Facebook. The crew landed to take a closer look, speculating that it might be a work of art, a movie prop, or some kind of NASA installation. “We were kind of joking that if one of us suddenly disappears, then I guess the rest of us make a run for it,” pilot Bret Hutchings told KSL.

On Twitter, some speculated that it was the work of aliens, while others wondered whether it could be left over from HBO’s Westworld series filming in the nearby Canyonlands National Park, or a previously unknown work by minimalist sculptor John McCracken, who died in 2011.

David Zwirner Gallery, which represents the late artist’s estate, added fuel to that speculation with the above tweet, and his own son told The New York Times that his father once said he’d like to “leave his artwork in remote places to be discovered later.” The mystery deepened when internet sleuths used historical imaging data from Google Earth to discover that it had actually been standing there, unseen, since sometime between August 2015 and October 2016.

While officials didn’t reveal the exact location of the monolith, curiosity seekers still managed to find it, taking selfies and examining it up close. On November 27th, photographer Ross Bernards of Colorado witnessed four men arrive, push it over, and ferry it away in a wheelbarrow, quoting them as saying “this is why you don’t leave trash in the desert.” Local sportsman Andy L. Lewis took credit for the sculpture’s removal on Facebook, claiming he did so to discourage crowds from invading a sensitive environment.

The next day, a similar monolith was found on Batca Doamnei Hill in Piatra Neamt, Romania, except this one was triangular in form. Journalist Robert Iosub attributed it to “an unidentified person, apparently a bad local welder.” It disappeared about a week later.

We may not know if an extraterrestrial or earthling installed the “monolith” structure, but we can confirm that it has been taken by an unknown party or parties. More: https://t.co/zmlHF4kPn9 #monolith #utahmonolith #utah pic.twitter.com/TiQMHK9cyM

There is currently a monolith at the top of Pine Mountain in Atascadero!!

On December 2nd, yet another monolith was discovered on a hiking trail atop Pine Mountain in Atascadero, California. Unlike the one in Utah, this monolith wasn’t firmly attached to the ground, and it was gone less than 24 hours later. Videos on social media showed a group of men removing it and replacing it with a plywood cross. Meanwhile, another was found on the Isle of Wight in the United Kingdom, another in Fayetteville, North Carolina, and yet another in downtown Las Vegas.

Every monolith placed after the discovery of the one in Utah is almost certainly the work of copycats. A group of artists has already taken credit for the Pine Mountain one, saying they were inspired to add to the phenomenon after the Romanian monument appeared. After their first effort was dismantled, they built a new one with a base weighing 500 pounds and got permission from the mayor to reinstall it on the hill.

A second group of artists known for high-profile stunts is claiming credit for the Utah monolith, and maybe some of the others, too. Members of the collaborative group “The Most Famous Artist” have posted photos and videos on their website and social media of similar monoliths being built and transported, and are now offering them for sale for $45,000. Of course, it’s unclear whether they’re actually responsible, or just cashing in on all the attention.