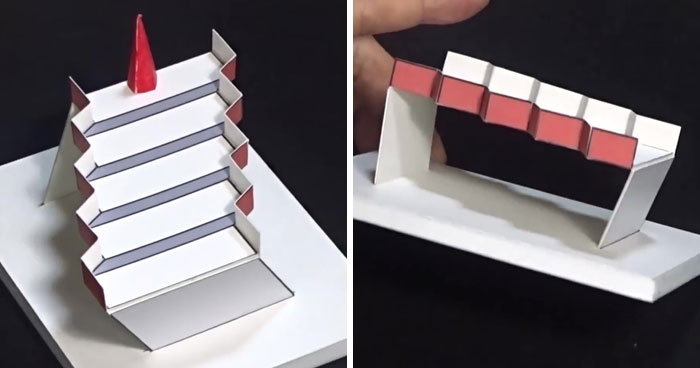 2020 was a mystifying year full of the unexpected and unexplained. Lucky for us all, the Neural Correlate Society topped off the strange last 12 months in a perfect way, presenting the brain-bending winners of its “Illusion of the Year” contest. Below are the top three, but be warned! The videos are a must-see to fully comprehend the trippy-ness of these deceptions. The top invention will especially have your mind doing backflips (as if it hasn’t already been twisted in enough knots by the events of 2020). 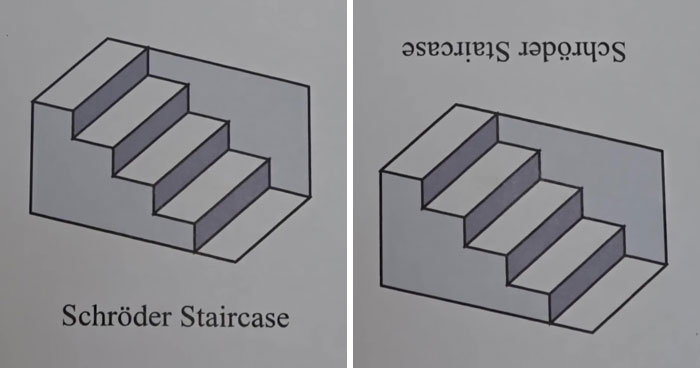 This illusion by mathematical engineer Kokichi Sugihara takes the classic 2D version to another psychedelic level. The original, created in 1858 by German scientist Heinrich G. F. Schröder, is an illustration of a staircase that can simultaneously be interpreted as stairs coming down from the ceiling and going up from the ground. The image is exactly the same when turned 180 degrees.

For some it is impossible to see the opposite view until flipping the image upside down, when it becomes visible for a split second before the mind undergoes the “Gestalt Shift,” a psychological phenomenon where the brain restores its newest intake to earlier perceptions.

Schröder’s staircase was the inspiration for much of Dutch artist M.C. Escher’s gravity-defying work in the twentieth century, and is now the impetus for Sugihara’s multi-dimensional wonder.

Described by some as a “mischievous mathematician,” Sugihara has taken a completely flat plane, added walls on two sides, put it on equal-length stilts, and given us a picture that our brains interpret as a staircase. That is, we see the dark tones and understand them as shadows, while converging lines give us a sense of distance. Even though what we’re actually seeing is all on a horizontal level, our minds make assumptions about familiar patterns, turning the angles and shades into a staircase automatically.

Part of the mirage is allowing that “staircase” to somersault on its axis. When a small orange cone is placed on the “top” step, it ends up on the “bottom” stair after being spun 180 degrees, even though in reality there is no up or down. 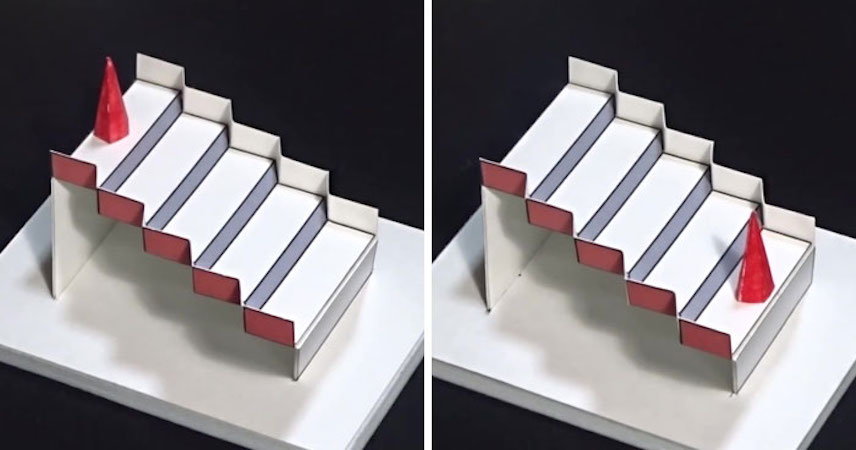 Sugihara, a Meiji University engineer, also took home first prize in the NCS’ contest in 2010, 2013, and 2018, and has been a top 10 finalist in all the years in between. About his latest project, he explains: “this object is an example of my experimental material to investigate the behavior of the brains, which are apt to misperceive 2D pictures as 3D objects when they are embedded in real 3D structures.” Because of the support columns and walls he attached, “we perceive new ambiguity, which is different from that of the original Schröder Staircase.”

Detailed plans for recreating this illusion are included on Sugihara’s website. 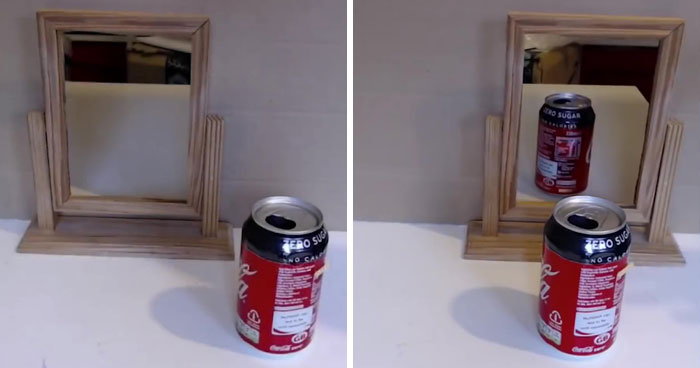 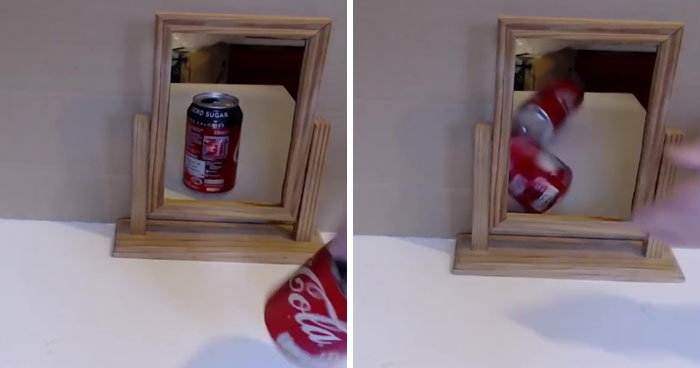 UK native Matthew Pritchard constructed the runner-up illusion this year, itself a Coca-Cola can sitting in front of a mirror. Only thing is, the mirror is fake (just a frame) and there’s a hole cut out in the wall behind the frame, with a strategically-placed second Coke can providing our cerebrum with the visual cues to reconstruct a reflection. In the video, the wall eventually collapses, revealing the hoax.

“Careful examination will reveal discrepancies in the scene,” Pritchard writes. “But what causes the vision system to make the initial mirror assumption is not yet fully understood.”

Using 2.5D computer-generated images, Daniël Maarleveld of the Netherlands came in third place for his letters and numbers made of curving grids. More specifically, the shapes move in such a way that the human eye is unable to decipher which direction they are turning in, making them viewable from an above and below perspective at the same time.