There’s something magical about the work of Japanese architect Terunobu Fujimori. His tiny tea houses have a sense of vitality and movement to them, as if they could transform into living creatures and walk away at any moment. Reminiscent of fairytales and Japanese animated films like those of Studio Ghibli, Fujimori’s fantastical structures stand on long leg-like stilts or hang from cables, gazing passively down at the world below. 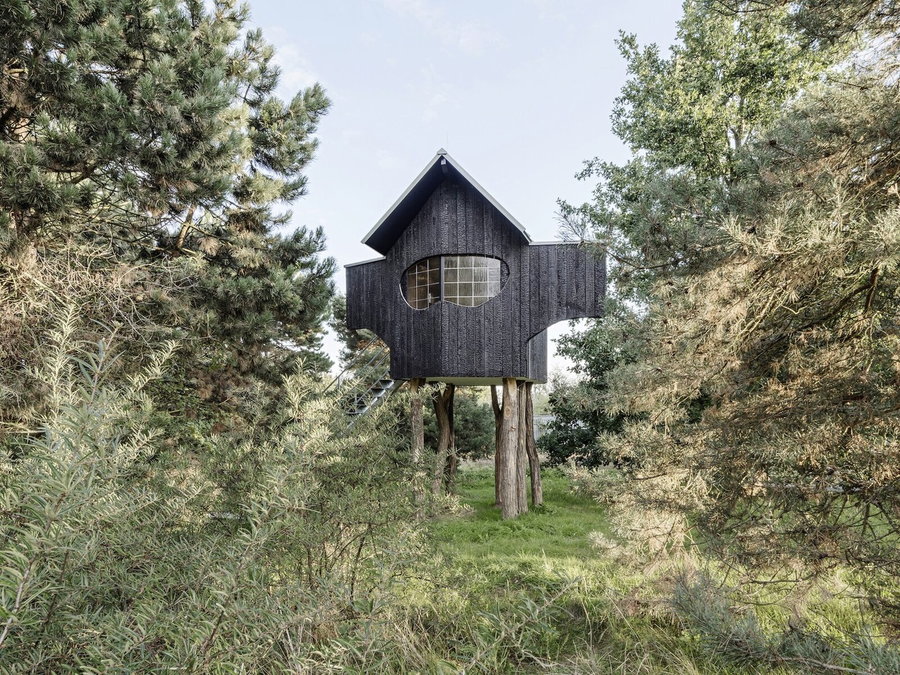 His latest is yet another tea house/treehouse amalgamation, blackened on the outside in a traditional Japanese process called “yakisugi.” The wood is intentionally charred to carbonize it, giving it natural protection against insects and weather and a dramatically crackled appearance. Simultaneously, the structure’s curving shape, pointed roof, and rounded windows lend a bit of softness to the effect.

A narrow 19-step metal staircase leads to the entrance. Inside, a U-shaped wooden bench wraps around a table used for tea ceremonies. Irregular cutouts in the oak-paneled walls reveal gridded leaded glass windows, adding to the organic and seemingly sentient qualities of the house with an effect that’s almost like eyes. 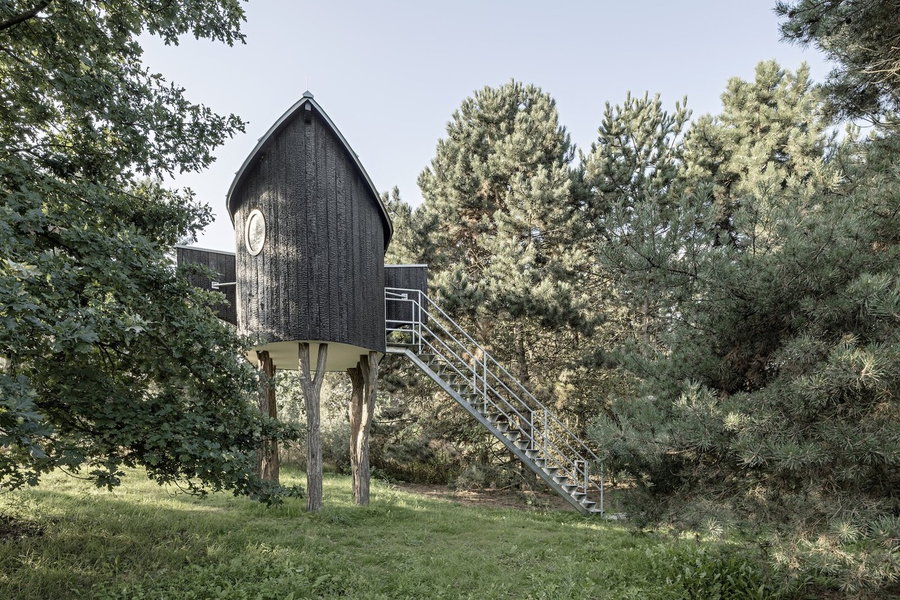 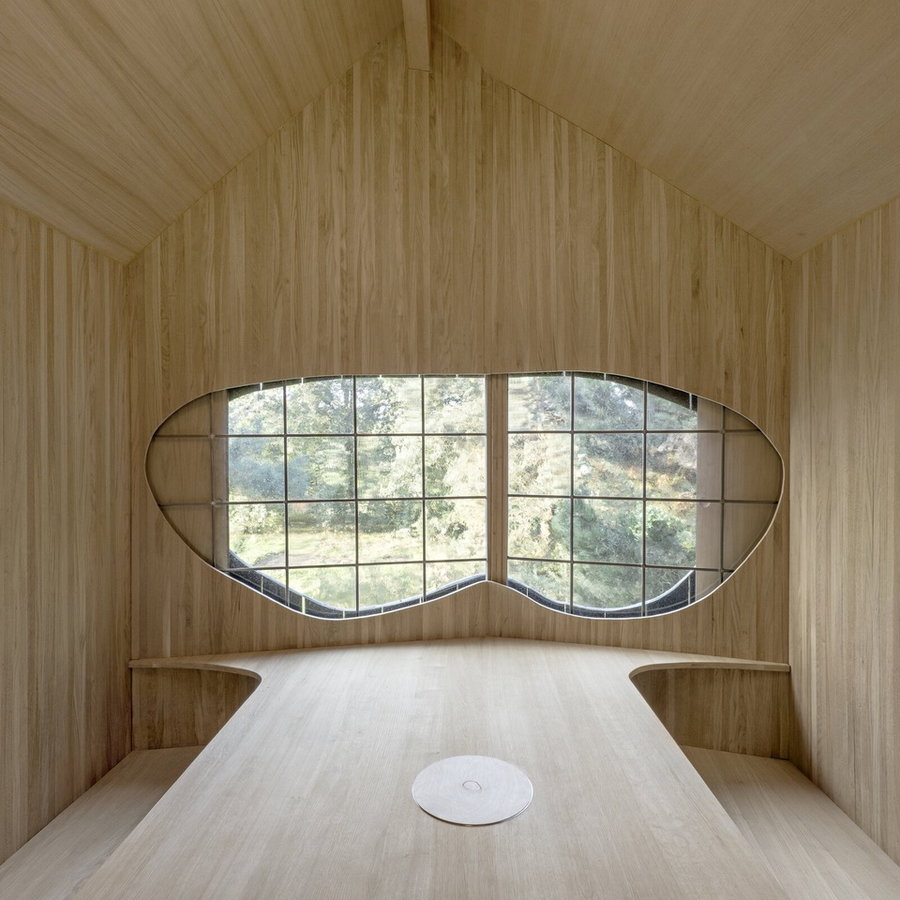 The Ein Stein House’s (“One Stone House”) location is almost as notable as its architecture, standing on Europe’s first permanent NATO missile base, Hombroich Rocket Station, which was abandoned before being purchased in 1994 by art collector Karl Heinrich Müller for use as a museum and outdoor art gallery.

The Museum Insel Hombroich, set in the German town of Neuss in North Rhine-Westphalia, features over 62 acres of meadows and woods. Now dotted with a collection of outdoor installations, the property was once so secretive that Neuss wasn’t even noted on maps, guarding stored warheads for cruise missiles and rockets. When he renovated and adapted the site, Müller wanted to embrace its history while infusing it with art and culture, leaving the storage facilities, hangars, observation tower, and bomb-shelter systems in place. 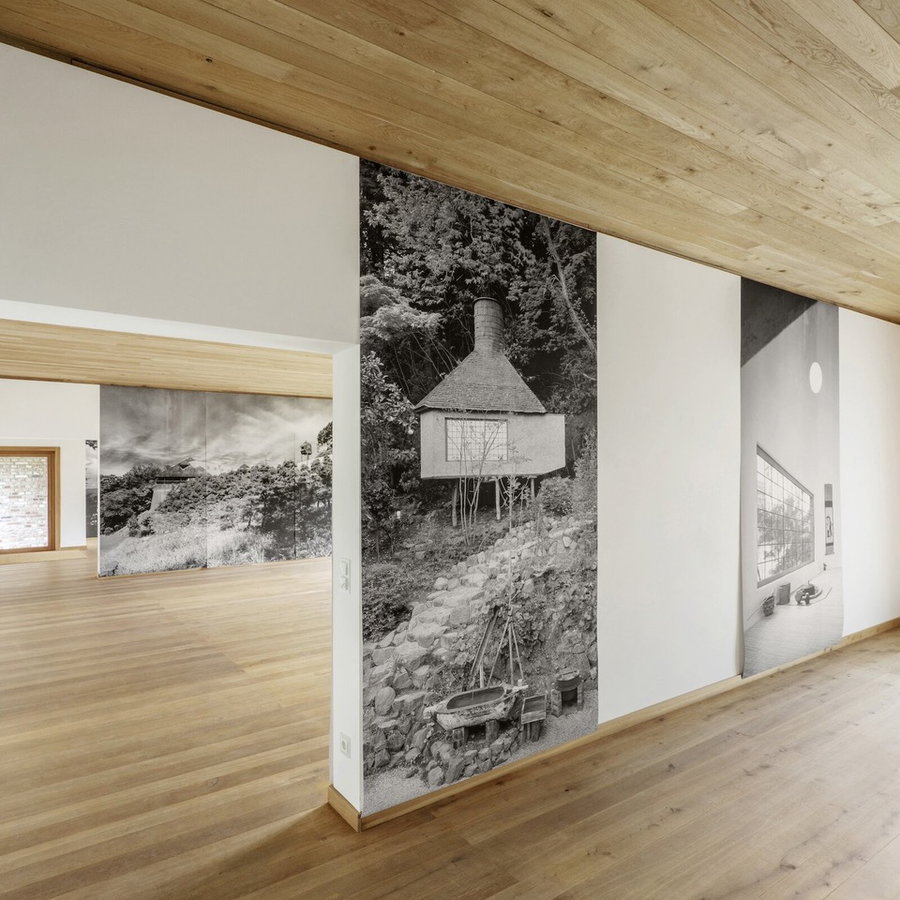 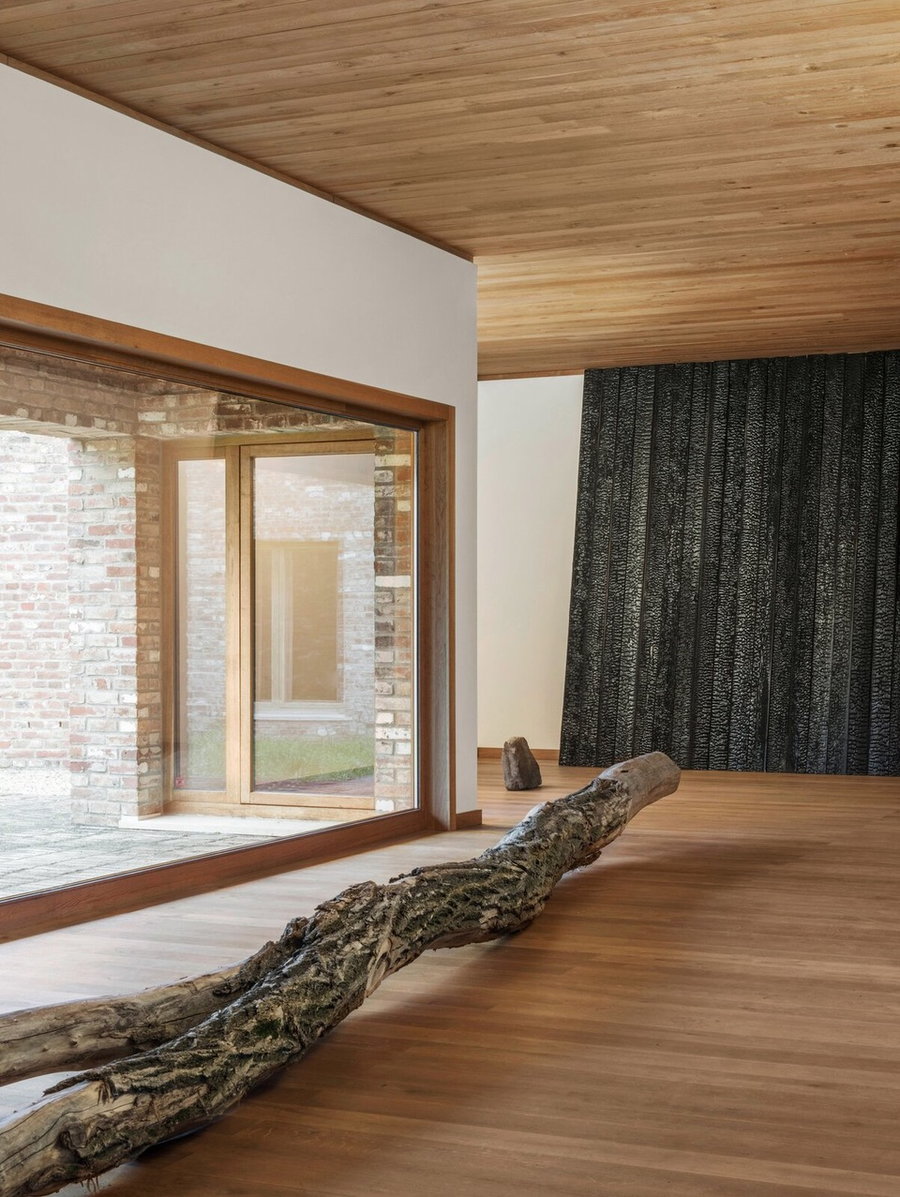 A description of the project on architecture site Metalocus explains that the “stone tea house and other architectures were developed together with the Japanese architect. The selection of projects focuses on the tea houses he has planned, in particular the Ein Stein tea house designed for the Hombroich rocket station and its creation. The tea houses — like other buildings and furniture shown — are shaped by the use of natural materials and their relationship to the surrounding landscape.” 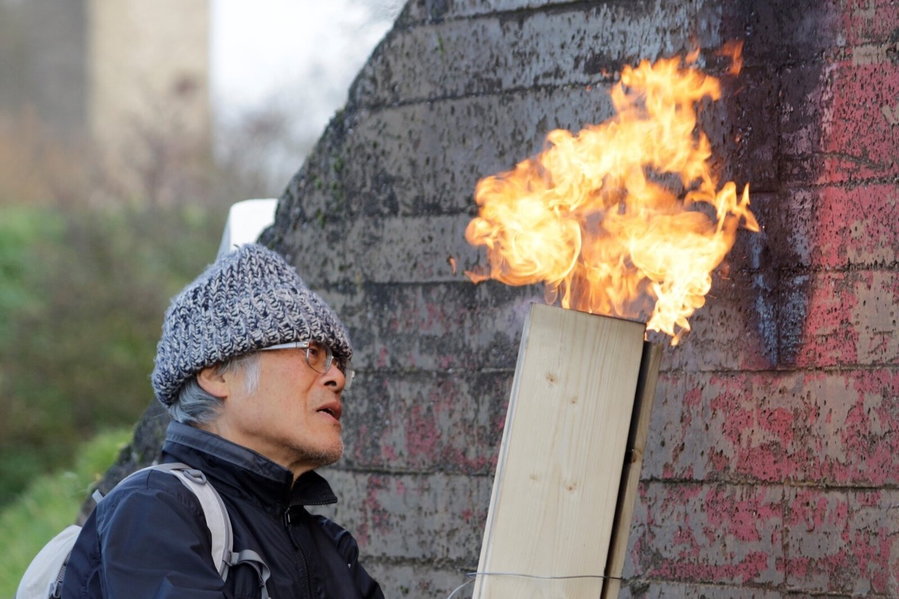 “Karl Heinrich Müller, the founder of Museum Insel Hombroich, was particularly interested in the tea ceremony and in objects and works of art from the context of this centuries-old tradition. The foundation’s collection includes numerous tea bowls and other vessels that were used in ceremonies. A selection not previously shown will be exhibited.” 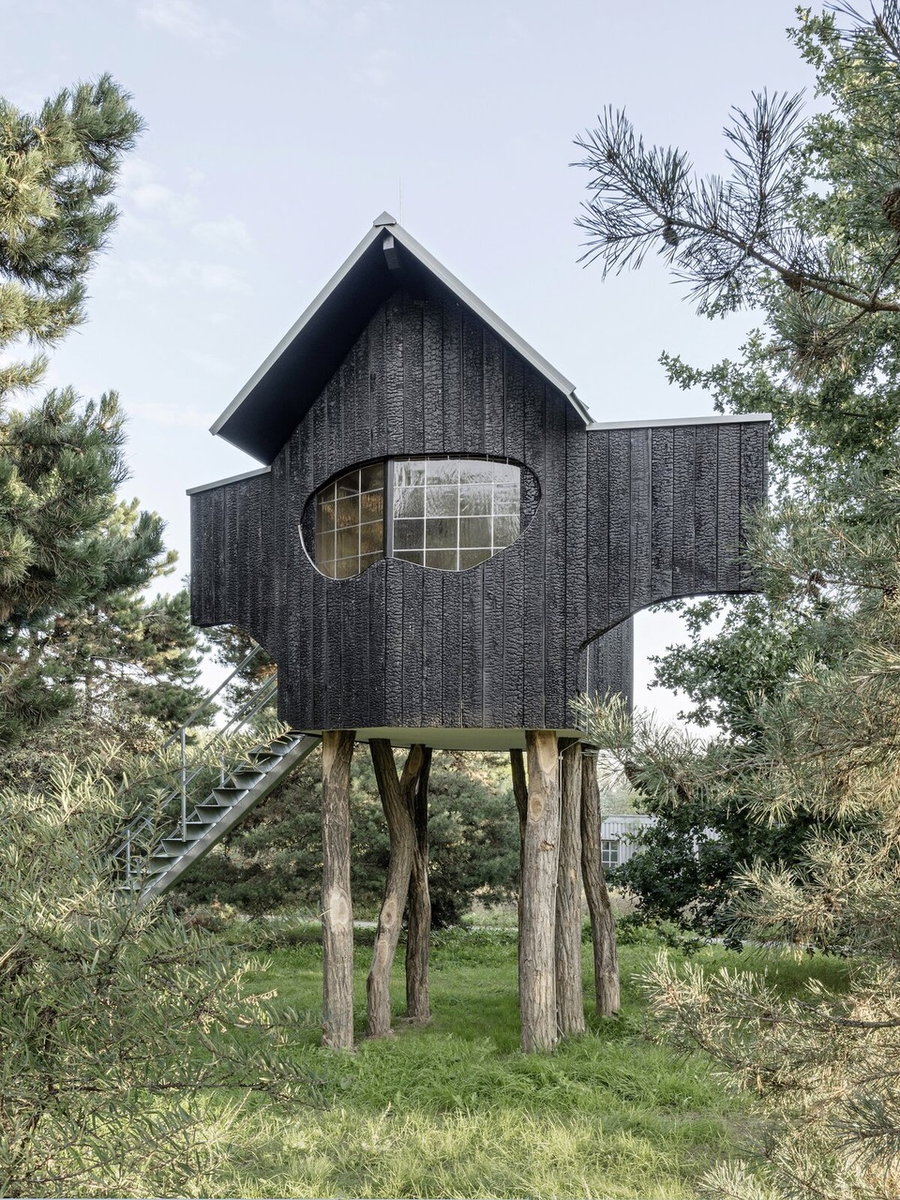 Inside the converted rocket station building on the grounds of the museum, visitors can take in the rest of the “Ein Stein Tea House and Other Architectures” exhibition, which features large black and white murals of Fujimori’s other works and an exploration of Fujimori’s creative process. The natural components of “Ein Stein House” are also highlighted, enabling a close examination of the “yakisugi” siding and the logs used to support the structure.