When it comes to clean vehicles, nothing currently beats electric power, which is set to eclipse fossil fuels over the next couple decades. Hydrogen has a lot of potential, but there’s one significant obstacle to its widespread adoption (aside from a general lack of fueling stations): it requires vehicles to have heavy high-pressure tanks, making it hard to use on smaller ones like motorcycles and scooters. A strange new sticky gray paste developed by German scientists might change all that. 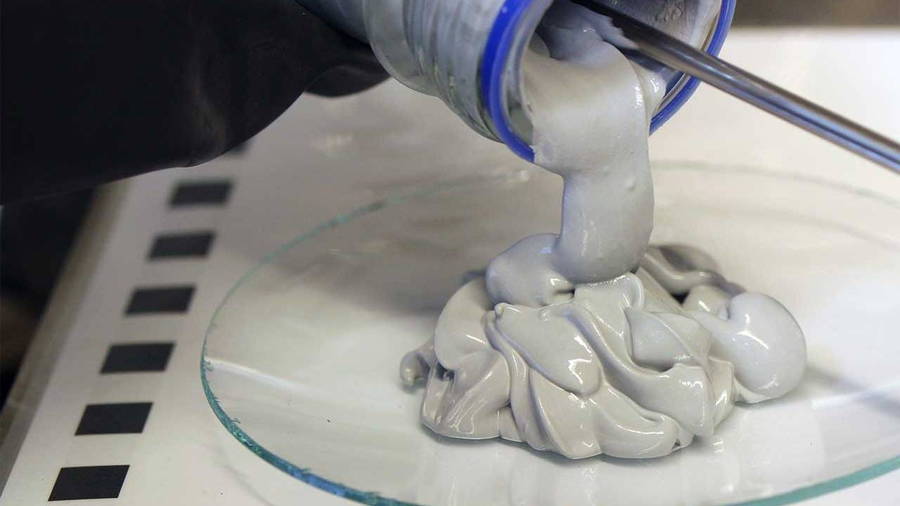 Developed by a team at the Fraunhofer Institute for Manufacturer Technology and Advanced Materials IFAM, POWERPASTE stores hydrogen at normal temperature and pressure, keeping it chemically locked until it mixes with water. That means it can be easily transported and safely handled without requiring expensive new updates to filling stations. All drivers would have to do is change a cartridge full of this goo every now and then, and add tap water into a water tank.

Conventional hydrogen-powered vehicles keep hydrogen in a reinforced tank fueled at a pressure of 700 bar (more than 10,000 pounds of pressure per square inch), while a fuel cell converts the hydrogen into electricity, driving the electric motor. It’s too heavy and bulky as it is to adapt to smaller vehicles. The new POWERPASTE consists of magnesium powder combined with hydrogen to form magnesium hydride, with an ester and metal salt added to form its thick consistency. When the paste is fed to a scooter or motorbike’s propulsion system using a built-in plunger system and water from the onboard tank, it creates a similar reaction to a conventional hydrogen fuel cell. Crucially, the system remains safe even when vehicles are sitting in the hot sun for hours.

As a result, POWERPASTE offers a range comparable to or greater than gasoline, and a higher range than compressed hydrogen at a pressure of 700 bar. In addition to scooters and motorcycles, it could be useful for the kinds of tiny cars that usually operate on electricity, like meter maid trucks and urban car share fleets, as well as large drones. Fraunhofer IFAM is currently building a POWERPASTE production plant in Germany, scheduled to go into operation in 2021, which will produce up to four tons of the stuff per year.

Elon Musk may call hydrogen fuel cells “stupid,” but the hydrogen industry is projected to generate $2.5 trillion in revenue by 2050, posing stiff competition for Tesla’s electric vehicles. Some hydrogen-powered cars are already on the market, like Toyota’s Mirai, Honda’s Clarity Fuel Cell, and Hyundai’s Nexo, all “plug-free” EVs that can refuel at gas stations equipped with hydrogen fuel in less than five minutes. The 2021 Mirai gets 402 miles of range, and more than 6,500 of this model have been sold or leased in California since 2015. For now, they’re only available in the Golden State, which has 42 hydrogen fueling stations in various stages of completion.